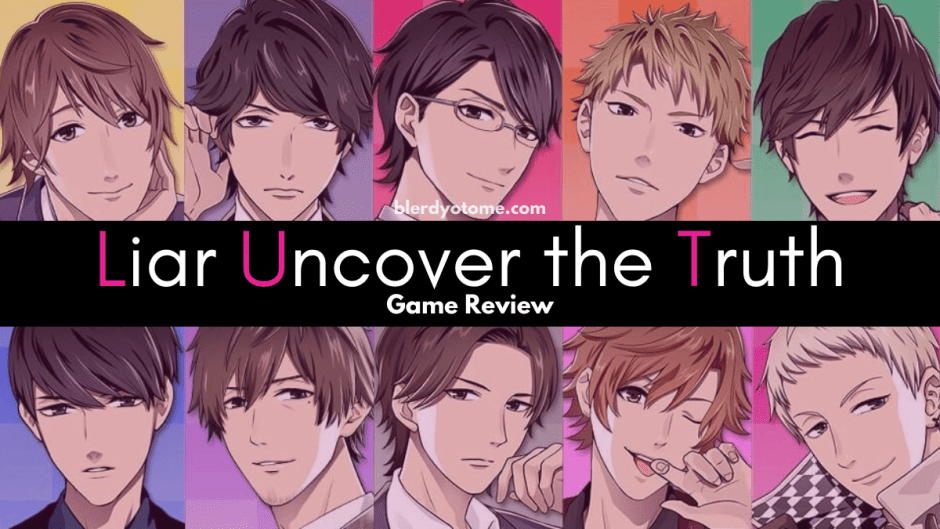 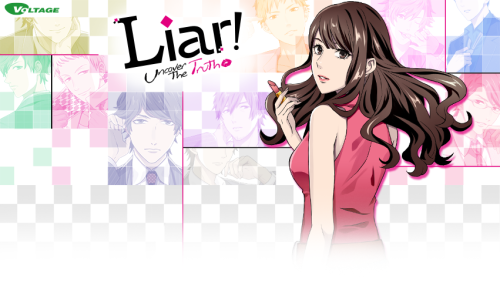 So, Voltage Inc. just put out a new free to play mobile app, Liar: Uncover the Truth, which is a cross between their previous titles, My Forged Wedding and True Love Sweet Lies wrapped in a Phoenix Wright bun. To be honest I’m not a huge fan of freemium games and apps, so I was planning to pass this game up, but like always curiosity got the better of me and here I am once again entangled in Voltage’s romantic snare. I know I am on break, but I couldn’t resist posting this review… *shrugs* I really didn’t expect to fall in love with this game!

This is like Mystic Messenger 2.0, Liar uses some of the same interfaces and techniques that made MM so popular, without the real time aspect…and it works!Snoop through your lover’s social media pages, and press him for info to uncover the truth, is your man a liar or is he telling the truth?

Lies, truths, and misunderstandings…
Which of these men can you trust?

“Have you been cheating on me?!”
A breakup with your cheating boyfriend leads you…
…straight into the arms of ten gorgeous men?!

But beware! Nine of these ten guys are no-good liars!

After breaking up with her no good cheating boyfriend, Shizuo Furuya, our plucky MC vows never to be tricked by a handsome face ever again! So, she does the next thing any newly single lady in her situation would do; she participates in a matchmaking event. The event is full of hot eligible bachelors, the cream of the crop and the MC is single and ready to mingle! While there the MC meets ten perfect men, each more tantalizing than the next, but you never can tell with handsome men… nine of them are liars and it’s up to the MC to weed out the liars and maybe find true love along the way!

So, in the game there are a total of ten potential love interests, however nine of the guys are dirty liars. As the game progresses, the MC will eliminate one liar after another until she is left with her ideal match!

The game mechanics are typical of most ticket based free to play mobile otoge. As I mentioned above, all characters are available at the beginning of the game with one character or “Liar” being eliminated at the end of each Liar arc. Liar arcs consist of several small chapters which require tickets to unlock. The prologue and the 1st Liar story can be accessed without the use of tickets, but all subsequent Liar stories will require tickets to read. Tickets can be obtained for free daily at 5AM or through in game micro-transactions (there are various ticket packages to choose from).

Liar arcs are split into three segments: Question, Investigation, and Accusation. Question sections, consist of visual novel segments in which the player gets to interact with some of the love interests in a casual setting (ie. a date). During these segments players will start to notice some questionable behavior from the featured love interests, which may become more apparent as the player gets closer to the Investigation segment.

In the Investigation segments the MC collects evidence to prove whether or not one of the featured love interests is hiding something. Unlock your inner stalker as you complete the following activities: snoop through social media posts; dig through your potential love interest’s personal belongings; comb through their homes and/or offices; analyze every text they send; and finally take notes on any “suspicious” behavior with your handy dandy notebook!

Finally, after you have collected your evidence, the MC can choose to accuse one of the love interests of being a liar. I kid you not, the Accusation segments are what I imagine Phoenix Wright would be like as an otome game. You confront the Liar about his misdeeds and present evidence to back up your accusations… If you present the wrong evidence you lose Cool/Savvy points, if you present the correct piece of evidence you gain points. At the end of the segment one of the men will be eliminated and based on the number of points you earned during the Liar arc, you will be awarded a ranking. Achieving the S rank unlocks all Endings for the eliminated love interest (True, Secret, Love, and Scumbag), the lower the rank the fewer endings you unlock. If you completely screw up, you will automatically unlock a separate Bad ending.

In addition to the story specific points system, Liar also features a separate mini game called, Flirt Time, that can be used to earn Cool points. During Flirt Time, players will be asked to answer two types of multiple choice questions: Girl Power questions or Seduction questions. Answering these questions will earn you one of two scores, Super Cool or Basic, which each correspond to the amount of Cool points you earn. The game also has a instant messenger system similar to the chat room feature in Mystic Messenger. however unlike MM there are no dialogue choices… In fact, so far there are no dialogue choices in this game at all, aside from the Accusation segment of the game….

I’m two liars in and I can honestly say that I’m hooked! The story isn’t complex or especially thought provoking,  but the underlying mysteries and the characters are just so damn captivating.  I just have to know which guy will be victorious at the end of the game even if it kills me. However, I do have one major complaint…. the chapters are two damn short. Come on Voltage, two lines of dialogue is not a full chapter and it is most certainly not worth a whole ticket (especially when 1 ticket = .99¢).

The artwork in Liar is a bit different from the art style in their other games, but I like it. The character sprites look great and I appreciate the additional sprite animations, though I will admit without an actual voice acting the mouth movements are a little unnecessary. Also, thank you Voltage for not only giving the MC eyes, but for giving her an actual on screen sprite! She is gorgeous!

As for the characters’ personalities, each liar has their own personality traits and quirks that sets him apart from the others. On the surface each guy is perfect, but if the games title is any indication, you’d be foolish to take any of them at face value. I don’t want to spoil anything, but let me say this… this game is 17+ for a reason! Out of the ten potential love interests, I am most interested in IT executive, Haruichi Mamiya; the sexy surgeon, Sotaro Shiga; and the stock trader, Keima Katagiri… what can I say, I have a thing for dark haired men!

But the real MVP in this game is the MC! I don’t know what is going on over at Voltage Inc., but I sincerely hope they keep it up! Not only is the MC a capable career woman, but home girl has a personality as well. She’s intelligent and witty, and she isn’t afraid to call the other characters out on their BS. On top of that, she is such a relatable heroine, there were times when my thoughts and her dialogue were one in the same. I haven’t been in sync with a Voltage MC like this since I played through Astoria Fate’s Kiss! This MC is perfect, absolutely no complaints!!

So, I couldn’t write a review on this game with out addressing the lies, since they are so integral to the plot. Voltage really went all out with these lies, some vary from mildly amusing to cringe worthy to downright scary and I can’t wait to expose each and every one of them! Sometimes it’s easy to spot the liar, like in the first arc, even though I didn’t know the extent of the lie, I knew right away which guy had… issues. But I’m assuming, that the further you progress in the game, the harder it’ll be to separate the truth from the lies. So I anticipate making some difficult choices further down the line.

When I first saw this game, I’m not going to lie, I had absolutely no intention of ever playing it. But, somehow curiosity got the better of me and I’m glad that it did! I actually really enjoyed Liar Uncover the Truth, even though the game is far from perfect.  This is a fun app with just enough comedy and mystery to keep players coming back to it day after day. The characters are interesting and the MC is a by far one of the best I’ve seen in a long time! I definitely recommend this game!!

45 thoughts on “Falling in Love with the Lie: Liar! Uncover the Truth-Review”