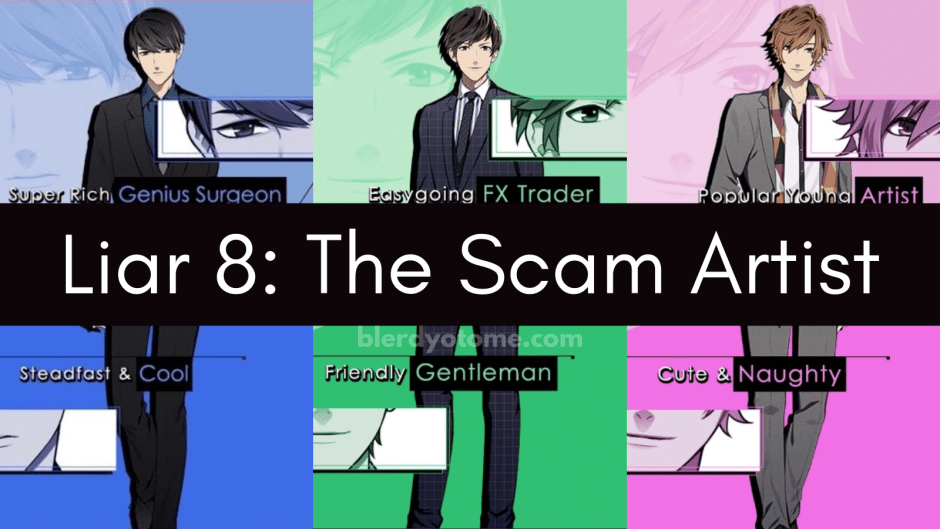 Finally, Voltage has decided to go back to their roots with Liar 8! After the rather tame lies of the last two (by all means disagree with me if you want), I was expecting something much more forgivable, but nope, the 8th Liar is a despicable dude (and I love it)! This time around there were three potential Liars to choose from, Sotaro Shiga, Itaru Yuikawa and Azusa Kurono; and I really, really, really did not see this one coming… If you want a spoiler free review click, HERE, if not keep reading! So without further ado, the 8th Liar, Azusa Kurono. 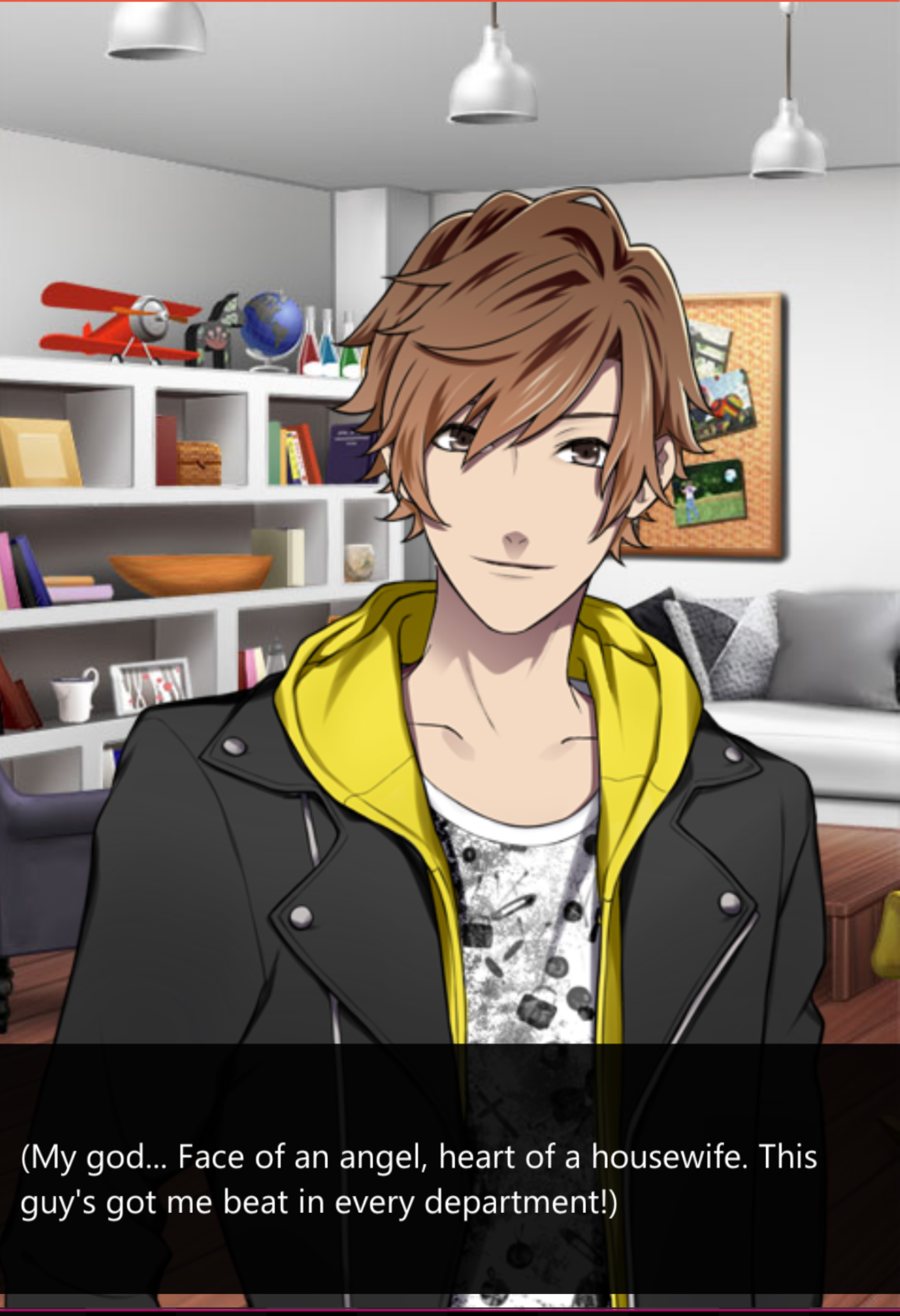 Azusa Kurono is an easygoing young artist. Unlike the other guys the MC meets at the Matchmaking party, he doesn’t really have a set job title. Instead he mostly works as a freelancer creative talent, picking up random artistic jobs throughout the game. However, in the 8th Liar arc, Azusa reveals that he is actually the author of the wildly popular Meowington children’s book series under the pseudonym, Shigeyuki Minagawa.

On the surface, Azusa is one of the best guys in the game! He’s a sweet, fun loving dude who knows how to just go with the flow. While the other guys are busy planning elaborate dates for the MC, Azusa takes a more laid back approach. His personality can be a bit out there and some of his mannerisms can be a bit childish, but that isn’t necessarily a bad thing. Azusa is a force of nature and it’s easy to get swept up in the excitement and fun that he exudes in just about everything he does. Oh and did I forget to mention that he cooks?! And, I don’t mean frozen dinners, dude can throw down in the kitchen! But, at the end of the day, despite all of his good points, I wouldn’t be talking about the guy if there wasn’t something seriously wrong with him!

Falling for the Lie…

Dear Voltage, I really need you guys to stop making Itaru look so suspicious all of the time… Pretty please! 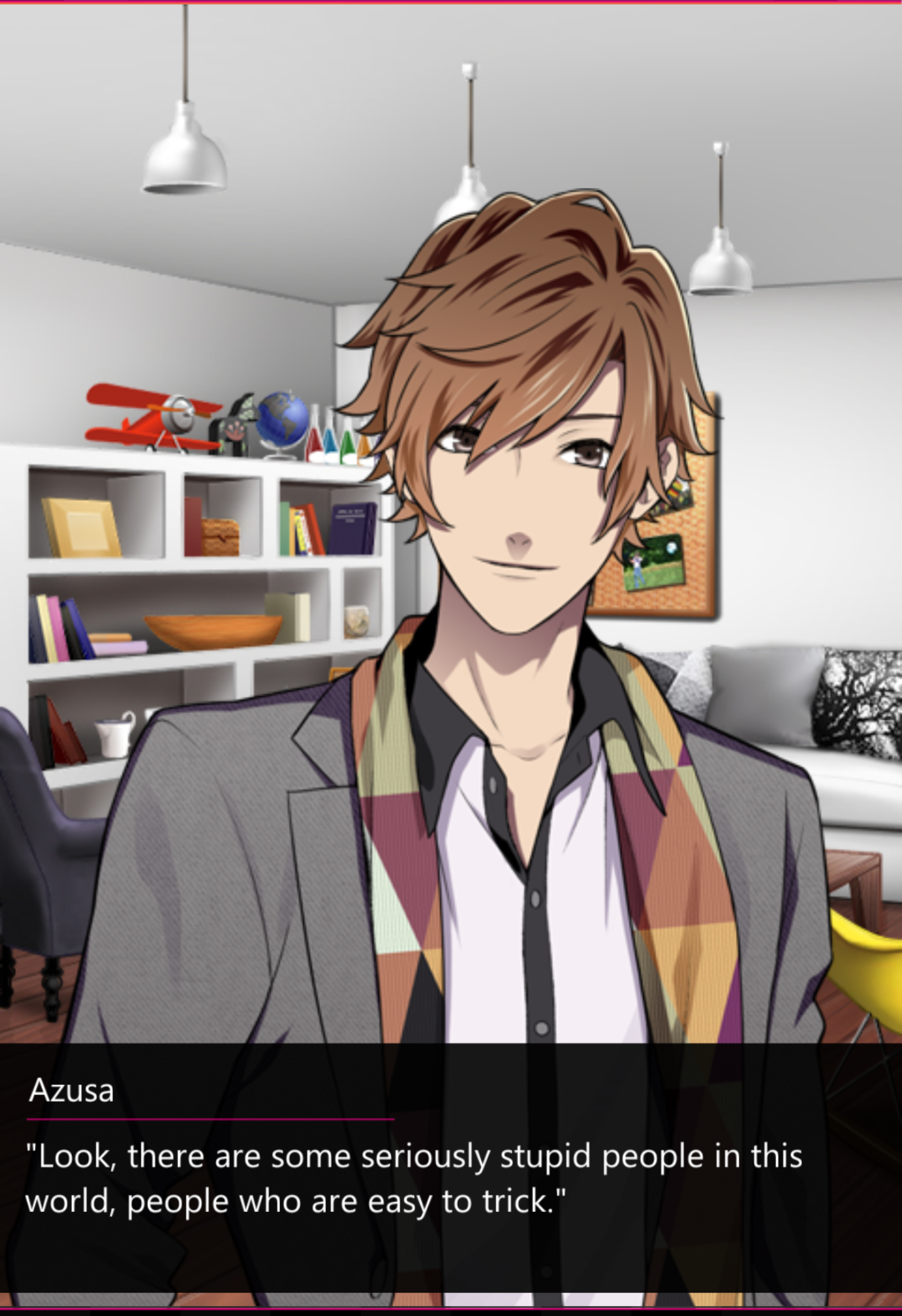 Dudes and dudettes  for the longest, I thought Itaru was going to be the 8th Liar, he actually seemed good for it this time… But then, Azusa went and asked the MC for money, the minute the words had left his lips alarm bells started going off.

I may not be well versed on publishing protocol, but for an author to have to front the bill for a book that already has a publishing company attached to it sounds suspect as hell. But, I didn’t trust him even before that… The minute he said he was an author a little voice in my head started whispering “He’s the liar…”, because we already had a author, it was Kagami. Now, while Voltage has a habit of using the same character archetypes in each of their games, they aren’t known to double dip when it comes to stuff like this… so I immediately called BS and that’s when things started to unravel. You see, Azusa is a marriage scam artist. He actually has a nice racket going on too. First he sweeps them off of their feet with a marriage proposal and when they agree he comes up with some sob story to extort money from them… In this case he tries to scam the MC into giving him money to fund the publishing of his next children’s book. 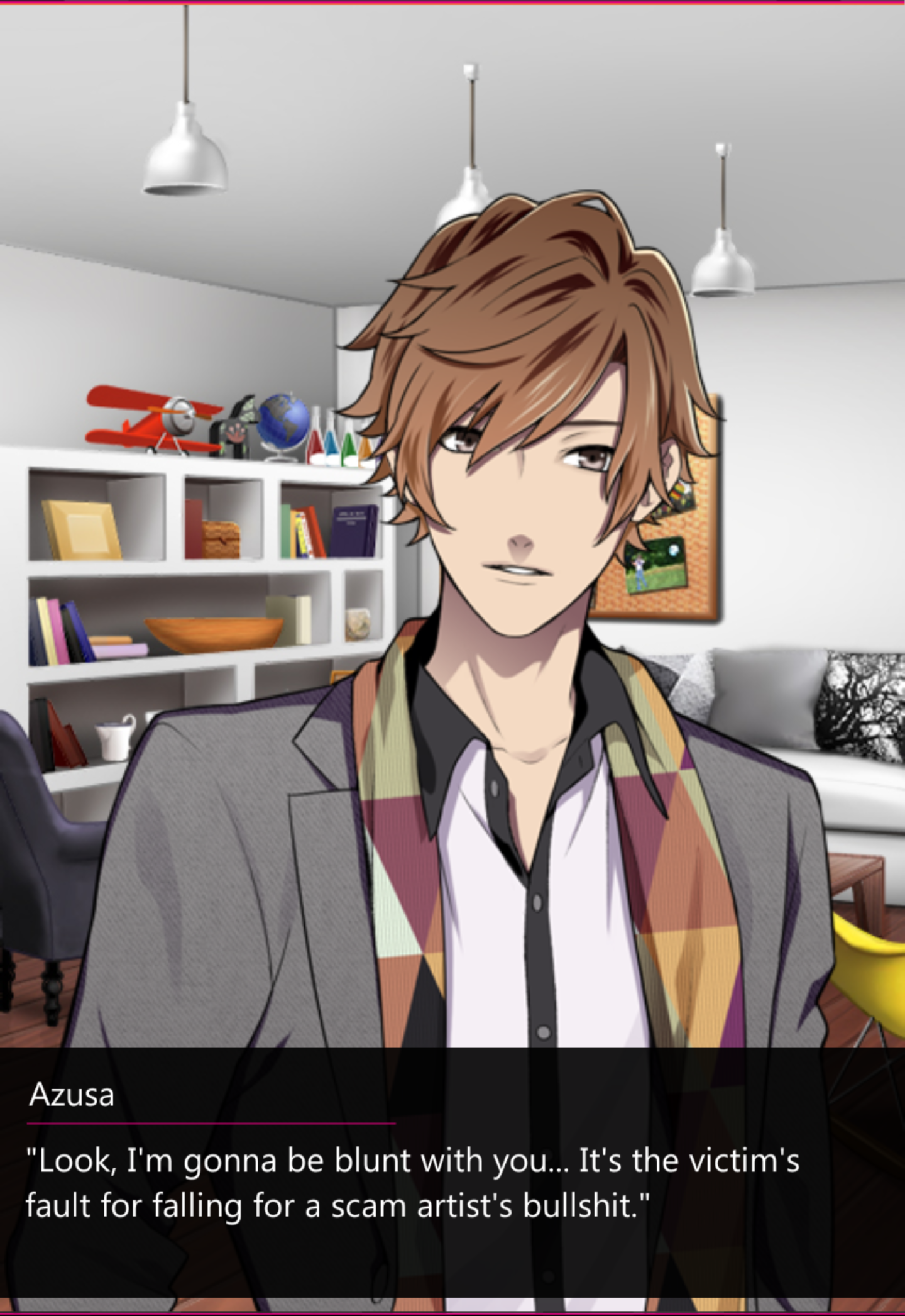 But, the beauty of Azusa’s deception is that he never actually asks the women to give him money… they almost always offer. All Azusa has to do is tell a sad story and the women practically throw their money at him! I say give that man an Oscar, because Azusa is an S Rank Moocher, a leech of the highest caliber… *ahem* and a Grade A asshole!

Oh my gosh, after the MC calls him out as a liar, you can say goodbye to the sweet, fun loving Azusa; dude is a sexist pig! He literally spends the entire Accusation segment harping on how stupid and gullible women are, especially when he turns on his boyish charms… He even jokes that kind-hearted women are the easiest to scam because they eat sob stories like candy! He claims that he is playing on women’s deepest fantasies, because in his head all women are jonesing for a wedding ring… and all it takes are a few sweet nothings from him and the wallets fall at his feet. I’m sorry, but Azusa sounds like an escort… Oh, but wait, there’s more, Azusa actually blames his victims… yes, you read that right… Azusa blames his victims! He claims that their kindness is their own down fall and I know I’m probably going to get a little flack for this… but, I actually kind of agree with him to some degree. Now, I don’t condone his actions at all, Azusa is a lying jerk, but I have seen first hand the power of a strategically placed sob story and just know, pity is a powerful ally for a seasoned scammer…

*I didn’t think I had to clarify this, but a lot of you seem to be basing you opinions about the Liars on their Bad Endings and I want to caution against that… The Bad Ends and the Love Ends are more like AUs rather than canon endings, which is why I tend to overlook them when discussing my thoughts about the Liars… I have consistently been getting S Rank for each of the liars… I’ve played through all of the endings… I know how bad they are… kay! 🙂

In Azusa’s Bad End, its been six months since Azusa and the MC started dating. Azusa is now living with her as they plan out their “happy” future together at the MC’s expense of course! Azusa cleans her out….

In the “Heart of a Trickster” Secret End, we get some insight into Azusa’s thoughts during his climactic proposal scene… Apparently Azu caught feelings for the MC, prompting a bit of last minute regret.

In the “The Blame is on You” True End, we take a peek into the past events that lead to his money scam. Because of his parent’s debts, Azusa had to work his way through school just so he and his younger brother could make ends meet. So, after college he put his creative dreams on hold to pursue a more lucrative career swindling women out of their money….

In the “Your Shoulder to Lean On” Love End, after punching Azusa in the face and dumping his lying ass, the MC finds herself moping in the rain when none other than Azu himself appears. After justifying his actions, Azusa attempts to win the MC back with a sincere love confession…

Finally, in the “Never Gonna Give You Up” Scumbag End, after being exposed by the MC, Azusa tries to get over losing such a prize by playing a few games at the arcade. But, no matter how long he plays, he can’t stop thinking about the one that got away… LOL the title of this end is just too perfect, Azusa gets rickrolled so hard in this end!! 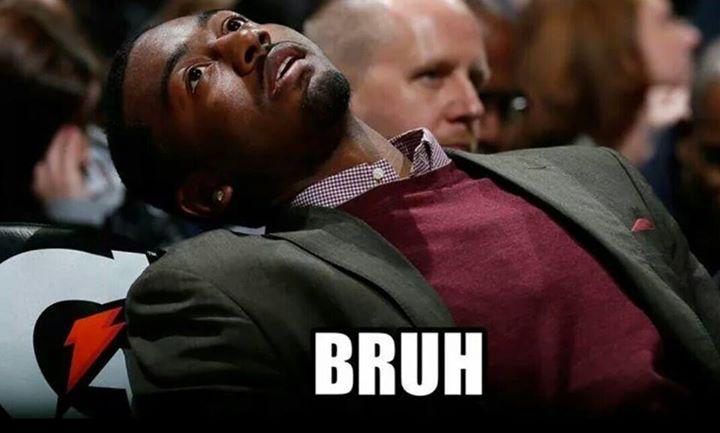 This game has me questioning everything… Azusa’s lie was easy to pick apart, but in reality scam artists aren’t as easy to spot. They can be friends, family member, coworkers, hell they can be total strangers… So, before you start opening your hearts and wallets to people, do a little digging. Sometimes pity can be more harmful to a person than indifference… *end of lesson* Azusa is a piece of work and the MC is lucky she got out when she did, because that Bad End was horrifying…

In the end Azusa was a pig and he more than deserved that punch in the face, so +1 to the MC!

Side Note: I swear to God, that after all of this… if Mr. Right isn’t Itaru I am going cry and maybe write a rage filled letter to Voltage Inc (the English branch and the Japanese). I will be extremely hurt if it isn’t him! I want it to be him so bad!

27 thoughts on “That Guy is a Scam Artist: Liar! Uncover the Truth- 8th Liar”