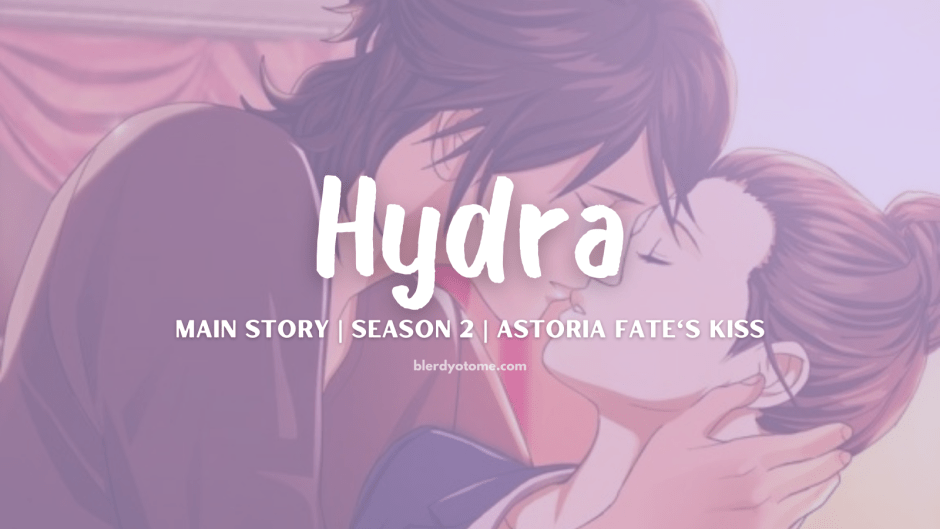 It’s taken me awhile, but I’m finally jumping back into the world of Greek gods and godly monsters. While season 1 focused on developing the relationship between Hydra and the MC. Hydra’s season 2 Astoria Fates kiss stories focused on the MC and Hydra’s attempts to maintain the relationship. Over the course of the season we see the pair tackle obstacle after obstacle as they learn to trust in themselves and each other.

It’s been a few months since the Hercules incident, and the MC’s life is definitely on the up and up, both professionally and privately. That is until our plucky MC takes a case that will shake Olympus to its very core! If you want to see what I had to say about Hydra’s Season 1, click HERE!

After the events of Season 1, the MC has been promoted to full fledged H.E.R.A. field agent. With her life long dream finally realized, the MC is on cloud nine. But, when Zeus in all of his godly rage comes down from Olympus convinced that the missing goddess, Hera has finally returned. The MC finds herself involved in a case that will change her life forever. So Zeus sends  Hades to look in to the validity of the recent Hera rumors. Cyprin assigns the MC to be his personal assistant during the investigation. But, when she mentions the new assignment to her equally hunky beau, Hydra. Let’s just say that he isn’t too thrilled with the news.

Initially, Hydra is against the MC working on the case. Not because he’s jealous or adverse to a strong working woman. But because he doesn’t trust Hades to have the MC’s best interests at heart. And after all of the crap they went through with Zeus and Hercules in Season 1, I kind of see where he’s coming from. It seems like every single time the gods get involved with anything trouble isn’t far behind. So when he sees the MC walking head first into danger, he does his best to keep her out of it.

But, while I agree with his reasoning, I don’t agree with his execution. Hydra knows how important H.E.R.A. is to the MC and for him to just shut her down is unacceptable. I don’t care how good his intentions are. So when the MC tells him to shove his BS where the sun don’t shine, I couldn’t help but pump my fist at justice being served. But, that also doesn’t mean that I fully agree with the MC either. I’m all for the MC following her dreams and taking the job. I just wish she was more cautious about jumping into another god-centric case. I understand that there will always be some degree of danger involved with her job. But it’s like she completely forgot all of the drama from the season before.

In the end the MC and Hydra spend the majority of the story fighting like children. The fighting more or less comes to a head when Hydra has himself put on the case as a well. And after awhile it seems like he more or less comes around to her line of thinking and they make up. I was actually surprised when Hydra and not the MC was the first one to call a truce. He even goes so far as to plan out a romantic date as an apology. But, the MC stands him up and has dinner with Hades instead.

Usually, I’d be okay with any activity that involves Hades in any capacity. But this was one of those rare exceptions. I have said it before and I’ll say it as many times as I need to. I hate love triangles.  Not only does Voltage make Hades a second lead, in a poorly written love triangle. But they made him act contrary to his own nature. *facepalm*

Thankfully the Hera case takes center stage for the remainder of the route. When it becomes apparent that the recent Hera sightings are fake. The MC and Hydra find themselves once again on the gods’ shit list. Especially when the MC uncovers information leading to a past enemy, who will stop at nothing to get their revenge on the our unlucky MC.

This case really takes its toll on the usually optimistic MC, bringing a lot of her shortcomings and insecurities to the forefront. For the first time we really see the MC hit rock bottom. And while it hurt to see her falling apart, it made the route feel much more realistic. It also allowed Hydra to step up and take on a more supportive role than he had in the past. If I liked Hydra before, I really fell hard for him in Season 2.

Despite initially being against the MC’s decision to work with the gods, Hydra does his best to be there for the MC when she needs him. Which is a huge step for the former lone wolf private eye. He has come a long way since the first season. I am impressed with how much Hydra is willing to change for the MC. He may be a stubborn butt munch 75% of the time, but I really felt for the guy in this route.

This is a completely different character from the one Voltage introduced in the first season. Hydra is much more open about his feelings. He’s much more vulnerable in this route because now, unlike before, he has something to lose. I think the MC explained it best, beneath his rather icy and stubborn exterior is a genuinely hopeful and optimistic guy. He just needed someone to beat it out of him a little first.

Do I Recommend Hydra’s Season 2 Route?

In Season 2 we’ve moved beyond the rose-colored honeymoon phase of the relationship (as if they had one to begin with) towards the conflict riddled second stage of the relationship. But, never fear, this route definitely had it’s fair share of sweetness. It’s just that this time around the romance really takes a back seat to the MC’s character development. Season 1 was very Hydra-centric, focusing primarily on laying the foundation for his character development.

While the MC was an integral part of the story she really wasn’t the focus. She is there to support Hydra. So it’s nice to see the roles reversed a bit in Season 2. This time around the story focuses on how the MC balances Her relationship and her career. I loved the character growth exhibited by both Hydra and the MC during this route, especially the MC. I am overjoyed that Voltage was able to show the MC being vulnerable, while still holding true to her portrayal in the first season.

The writing was great, the Hydra/MC/Hades love triangle not withstanding, and I really enjoyed the underlying plot of the Hera case. I will admit that in hindsight the reveal was obvious. But it was written in such a way that it still kind of sneaks up on you. I’m really looking forward to seeing what this new turn of events has in store for us in Season 3! Despite the rather heavy plot, the romantic moments between the MC and Hydra were… *fans self* S-T-E-A-M-Y! They were at it like jack rabbits. But I guess when you bicker as much as they do the make up sexy time must be amazing. I never new Hydra was such a romantic. From his last minute romantic date to his cute proposal set up. I was blown away by how much effort he puts into making the MC  happy.

There are two endings the  Thrilling End and Passionate End. Both endings are more or less the same, but the Passionate end unlocks the Proposal After Story. I don’t really prefer either ending over the other, since they both wrap up the events of the route in the same way.  If anything the best ending to season 2 is the Proposal After Story. Man oh man, Hydra really outdid himself with that proposal!