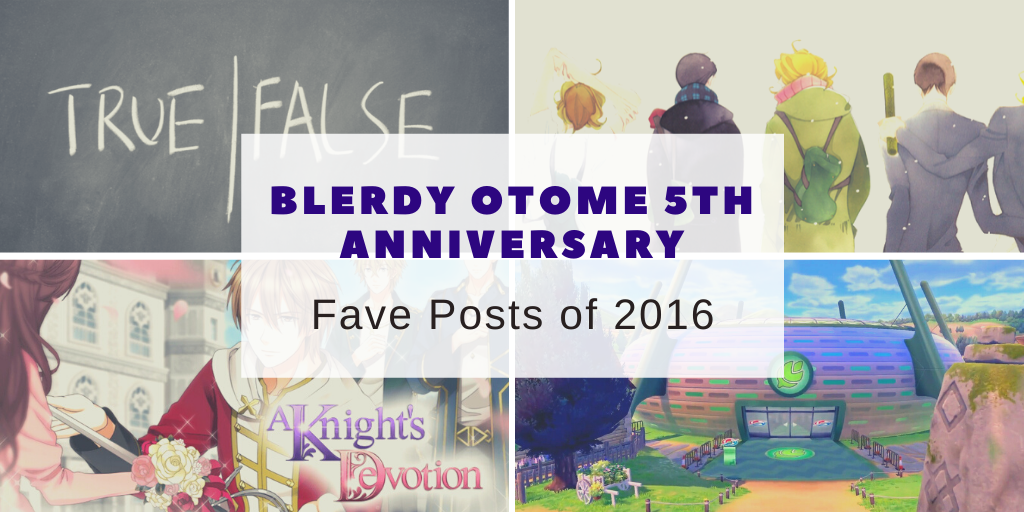 Hey Hey Blerdy Tribe! August marks the 5th anniversary of this blog and over the years I have written quite a few posts (over 800 and counting). I’ve come a long way since my start in 2015, but I still like to look back at some of my earlier posts, it keeps me humble.

By 2016, I had started to come into my own a bit and there’s a lot more of a focus to my content–I started a couple of ongoing blogging segments (some of which are now retired) and I made a conscious effort to write more game reviews. So, let’s look back at some of my favorite posts from 2016!!

A Knights Devotion was my very first Voltage game, I was new to the fandom and it just happened to be the very first game that I saw in the app store at the time. Lute was the first guy to choose from and the character that made the biggest impression on me during the prologue so I decided that he would be the one to pop my otome cherry…So to speak… Back then I was still getting a feel for my type, and Lute is far from it (I have a habit of choosing ice princes, tsundres, and the snarky aloof guy), which is why in hindsight I’m surprised I liked him so much!

Of all the routes in Amnesia Memories Toma’s route is the one that left the biggest impression on me. This was my first experience with a “true” yandere character and let’s just say I was not ready for him! So, relive my pain with this review, and maybe check out my other Amnesia Memories reviews as well.

I wrote this post after reading an article Vogue had written about otome games and at first I praised the article for giving the otome community some much needed exposure. But, upon a second read I realized that the article made a lot of generalizations about the type of people that play otome games. So, I wrote this short essay to kind of dispel some of the article’s assertions about otome fans.

Wait, Are those Guys Kissing?!: My Yaoi Journey- Part I

This is a revamped version of my So I kinda sorta like yaoi…and by “like” I mean LOVE! post. In this one, I talk about my first experiences with the boys love genre–from the misconceptions I had about the genre to my first BL series, and everything inbetween. The title is actually something my younger brother said to me when he accidentally walked in on me watching Gravitation and trust me it was just as mortifying as it sounds.

Did you know I wrote reviews about non-otome games? I’ve always had a thing for longer story based games and one of my favorites is the Zero Escape series. I remember randomly picking this game up from a bargain bin at Gamestop, the artwork looked cool and I liked the premise–I was hooked! The mystery, the puzzles, the characters… EVERYTHING! Now, the Zero Escape series is one of my favorites and this is the review of the game that started it all!

Doukyusei is one of my favorite boys love series… it’s just such a sweet series and I am beyond happy that there’s an official English language release! This was one of the first series I’d read where the emphasis wasn’t on sex, but on developing the emotional relationship between the main couple. Doukyusei focuses on first love and all the excitement and awkwardness that comes with it. When someone new to BL asks me for a recommendation, I always suggest this series!

If I were a Gym Leader: My Pokemon Gym-Pokemon Tag

I’ve done a lot of Blogging Tags over the years, but this is one of my favorites! 2016 was the 20th anniversary of the Pokemon franchise, and the Pokemon Company made some huge announcements–Pokemon GO took the world by storm, getting all of us off our asses for an entire summer and the announcement of Pokemon Sun and Moon had us all eager for a new addition to the franchise. Around that time this tag was making the rounds, giving fans of the franchise the chance to create their own Pokemon Gyms–from your gym’s design, to the types of pokemon you use to the badge. This was your chance to let your imagination run wild!

How to Survive Mystic Messenger Hell in 8 Easy Steps

I’m going to be honest, I wrote this post after 11 days of sleep deprivation… so this isn’t exactly a masterpiece. However, if you’re thinking of jumping into Mystic Messenger hell, this is definitely a must read! It’s all in the title with this one–this is just a list of 8 tips for surviving your playthroughs of Mystic Messenger.

Have you ever read a manga that made you wonder what kind of person could come up with something like this? A manga that made you think, why does this exist? Well I have! Over the years I have read my fair share of manga titles; some good, some bad, and some that had me scratching my head in confusion. But there were a chosen few manga titles that made me go… WTF is this?

Only Lonely Women Play Otome Games and Other Common Misconceptions

This post is kind of a follow up to my To Be the MC or Not To Be the MC: How Do You Otome? post, which was a response to a Vogue article on the otome fandom. The article, while great for bringing the fandom a bit more visibility made a lot of sweeping generalizations about the fandom–many of which were completely “wrong”. So, I went about addressing some of the misconceptions…

Well, these were my favorite posts from 2016 and even though they aren’t as polished as some of my more recent content I’m really fond of these posts! If you’re in the mood for more classic Blerdy Otome stuff… check out the Past Exploits dropdown at the bottom of the page. I’ll also be sharing my fave posts from every year I’ve been blogging throughout the month of August, so keep an eye out for those!!