Before reading this post, it’s important to answer one simple question: What exactly is an otome game?  Generally speaking, otome games (shortened to otoge) are “story based video games that are targeted towards a female audience” (wiki). Typically, the plots of these games focus on fostering a romantic relationship between a female protagonist and one of several male (and in some cases female) love interests. While romance is the main draw for players, otoges have been known to cover a diverse range of subjects and topics. In the past, otoges were only marketed towards Japanese women, but in recent years their popularity has extended to the Western market.  This new, growth has led to a rise in English-language otome games and an increase in the number of localized Japanese otoges. However, the market for otoges in the West is considerably smaller than that of the Japanese market.

So this past week I saw that Vogue had written an article about otome games…At first I was excited, this is just what we need, I thought, more exposure means more games…and what better way to get that exposure, than to have an article in an internationally syndicated medium, like Vogue. So like many of you, I retweeted and reblogged the article, but then I read it again and I noticed something I didn’t realize the first time. First, they assume all otoge players are women and two they generalize players…On the first count, Vogue is primarily targeted at women…so I guess I can let that slide, but the second point isn’t so easily dismissed. The article made it seem like women/girls who play otome games do so in order to escape the reality of not having a real boyfriend….

Just like with other game genres, there are several reasons people (and I say people, because men play otome games too) play otome games. Personally, I play them for the same reasons I play Portal or Pokemon, because they are fun, it’s not really about escapism. I play for the plot mostly (and the sexy CGs). I will admit that there are times when I get carried away and get swept up in the story, but I don’t put myself into the game. I’m me when the game is on and when it’s off… For me the MC is her own character (most of the time), I don’t superimpose myself into the game…I tried it once and it was a little too awkward for me to handle. The guys kept saying my name and instead of being turned on, I was completely turned off by it and had to quickly change it back to my default MC name: Nicole Brown (no this is not my name either). Nicole is the one doing the romancing…She’s the one marrying character X…I mean hell, the MC doesn’t look like me anyway (I guess I could Photoshop the CGs if I wanted to).

I even write my reviews that way too, I rarely use ‘you’ when writing about the MC, instead opting for ‘her’, ‘she’, or simply the ‘MC/Heroine’ (it’s intentional). But there are some people out there who like to pretend that they are the MC. I shouldn’t say pretend…They play as if they are the MC and that the romantic situations in the game are happening to them. There’s nothing wrong with playing that way, but to generalize and categorize all players into that specific box is not okay.

They then go on to suggest that otoge/visual novels/dating sims prepare people for future real life relationships…ummm, I don’t think that’s how it works at all. People don’t work like games, there is no perfect conflict resolution situation. People are fluid, constantly changing and growing based on any given situation. It is possible to mess up a virtual game relationship too, believe me I’ve done it before.

And then we get these gems:

“If a female can ask for less by playing a game—like, I don’t need a handsome husband because I get that from a virtual boyfriend,” says Yuna, “it could create a better relationship.”

“It offers me hope that whatever I’m virtually doing, or subconsciously doing, will eventually manifest into my real life,” say Storm.

WTF! That sounds an awful lot like settling…like no one can compare to the standards of my virtual boyfriend, so I will explore all of my fantasies with him and in the future I’ll settle for an Average Joe Schmo. Or better yet if I wrack up enough in game experience, I’ll be an amazing girlfriend for someone special in the future…

The gaming companies like Voltage, on the other hand offer a different rationale for why people play otome/visual novels, which is more in tune with my personal views.

“The virtual romance gamer is attracted to drama-driven story lines, says Kentaro Kitajima, vice president of Voltage. “[They enjoy] our content like they would reading comics or watching TV,” Kitajima explains.” 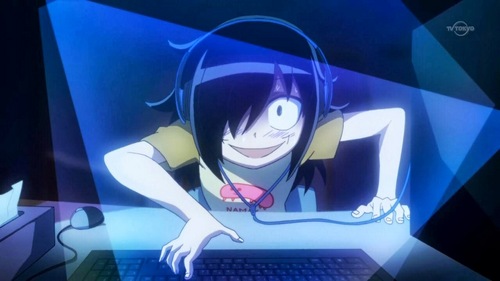 What do you guys think? Do you agree with the article? Why do you guys play otome/otoge?  Do you have any suggestions for posts? Any burning questions? Feel free to Comment on this post or Ask Me on my tumblr!  As always Thank You for reading!