So, there’s something that I have been meaning to get off of my chest for awhile now and it is important that I say it now.

What’s that? You say you still can’t hear me? Okay, this time for sure! Are you ready? 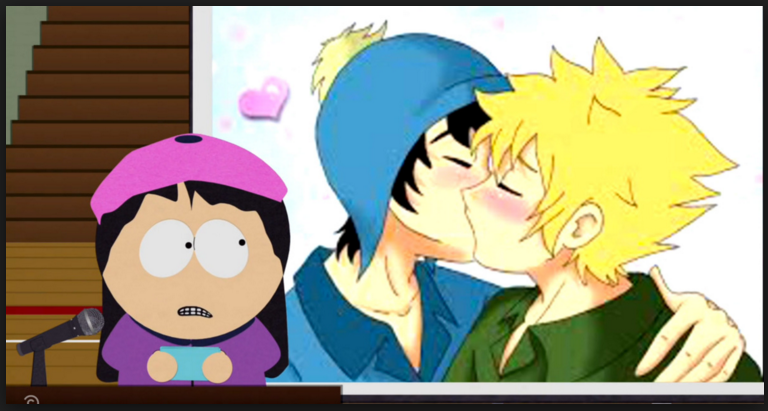 Okay, so I know that’s not really a secret, but it’s just occurred to me that I have never actually taken  the time to explain how I got into yaoi. So, what better time than during Yaoi/BL Week!

How to Talk about Yaoi

While, I’m not especially open about my love of the genre,  I’m also not hiding it either. I guess it’s one of those unspoken things, that I don’t really go out of my way to talk about too often. I mean, it’s not something you put under the Interests section of your resume, and it’s certainly not really something you bring up on a first date either. So, how do you go about bringing up the topic of yaoi with other people?

For most people, yaoi is a secret, it’s something you look at while holed up in a closet in your room with the lights off and the shades drawn. Even among fellow anime fans, a seemingly open and accepting community, there’s the stigma that yaoi is something “weird” or “dirty”. When you bring it up in chat rooms or in polite conversation, more times than not you are immediately labeled as “one of those people”. But, what does that mean? Who are those people?

In popular culture, fans of the genre are depicted in one of two ways: 1) as lonely women with absolutely no social life who spend their time pairing up random men or 2) as over sexed fangirls who get off on watching two guys hump each other like rabbits. Neither one paints a pretty picture of yaoi fans… Even, the terminology used to describe fans of the genre is not without the self-depreciating bite. Fujoshi, is a pun on the Japanese word for respectable woman, but can literally be translated to mean “rotten woman”, when the kanji for fu is changed. The term has since been reclaimed by fans who wear it like a badge of honor, but the ridicule from outsiders still remains.

The Do’s and Don’ts of Yaoi Conversation

So I treat yaoi, the same way I treat politics or religion,  I tell people if they ask about it and gauge their reaction. If the person seems open to the topic, then I count them as an ally and continue the conversation at their pace. This is key, do not info dump yaoi to a newbie, you’ll scare them away. (Think Gen I Safari Zone, throw some food first then throw the Pokeball.) Gently ease them in to the topic, answer questions (when asked) as simply as possible. When asked for suggestions give them the light, shounen-ai stuff first (DON’T give them the angst filled rapey stuff)! Maybe even suggest a nice DJ or something. If, however, the person is not open to it, I listen to their opinion and politely agree to disagree and that’s it. Do not try to convince them that yaoi is the best thing ever and that their opinions are wrong. Stop, listen, and then change the subject!

Origins: Rise of a Fujoshi

So, I have a confession to make…in the beginning, I was one of those people who detested yaoi and all that it stood for. I avoided yaoi like the plague, to me it was something dirty, I even jokingly referred to it as “gay anime porn”. I looked down on girls who claimed to like the genre, there must be something wrong with them, I thought as skirted around them nervously at school or in the bookstore. Mind you, I had never even looked at yaoi, but some how I knew that there was something inherently wrong with it.When I think back on how closed minded I was back then, and I laugh, if only 16 year old me could see 25 year old me…what would she say? …I have come to terms with that part of my life, I was young and ignorant.

But, what changed? Well, I guess I was about, 17 years old give or take, when I experienced my first Boys Love anime. Back then my access to anime in general was limited to sneaking my parents computer when they went out or watching whatever was available on Comcast On Demand. I don’t know if they still do this, but, back then you could watch Funimation anime for free if you had cable, so that was where I consistently watched anime. There were some good series up there, but there are only two that are really important for this post: Gravitation and Descendants of Darkness.

Officially, Gravitation was the first BL series that I ever watched and I didn’t even realize that I was watching a BL anime. In hindsight, it was obviously a BL anime, but at the time I just thought it was just an anime about a band, with really affectionate characters. I even thought that Shuichi was a girl (it was the pink hair)…The story was compelling and I really liked the songs, so I didn’t think much of it when Shuichi would hang all over Eiri Yuki…It wasn’t until my younger brother walked in on me watching it and asked, “Are those two guys kissing?” That I realized my mistake, I quickly bribed him into silence and shooed him out of the room. But, the damage was done, I had done the unthinkable…I had watched a Boys Love anime…and…I liked it! I realized it wasn’t the big bad as I had always thought, it was the same as any other anime I had watched in the past. I was confused and a little scared at this discovery, but I was in too deep…Well, Mama didn’t raise no quitters, so I quickly finished watching Gravitation (which I definitely recommend for newbies) and reflected on my feelings.

I didn’t feel any different… all of my limbs were in place and I wasn’t sprouting boils or anything weird, I was still me!  After a momentary BSOD, I moved on to the second title, Descendants of Darkness, a supernatural, occult detective anime series. Since I had watched Gravitation right before it, I immediately recognized the BL undertones for what they were. That show was dripping with sexual tension, but the most compelling aspect of the show was the plot. Asato Tsuzuki is a ‘Guardian of Death’ investigating a series of mysterious murders happening in Nagasaki, when he is assigned a new partner, Hisoka Kurosaki. The pair investigate the strange goings on, while fighting supernatural beings along the way. A lot of time is spent on the character development between the main pair, but it is never over done, nor does it take away from the plot. Everything seemed to develop naturally along with the plot, so you ease into the idea of a romance between two men. Now, the show leaves a lot of questions unanswered, and the plot could be downright campy at times, but DoD was a solid introduction to the yaoi/BL genre.

For what they are, Descendants of Darkness and Gravitation showed me that yaoi and BL aren’t about sex,they are much more than that. Yaoi and BL can have plots too, they can have compelling stories, and damnit they can have interesting characters too! Yaoi wasn’t the big bad I thought it was, it was just anime that just happened to feature male on male relationships. Once, I came to terms with that fact, I was open to learning more about the genre and exploring more titles, but that didn’t mean I was open about it. I was still very much in the yaoi closet, and it wasn’t until college that I discovered yaoi manga and became open with my yaoi obsession….but I’ll save that for Part II.

So how did you discover yaoi/BL? What was your first series/title? Should I write a part two, or are you guys content with just part I? How are you enjoying Yaoi/BL Week so far? Do you have any suggestions for posts? Any burning questions? Want me to review a specific game, manga, or anime? Feel free to Comment on this post or Ask Me on my tumblr! As always Thank You for reading!

34 thoughts on “Wait, Are those Guys Kissing?!: My Yaoi Journey- Part I”