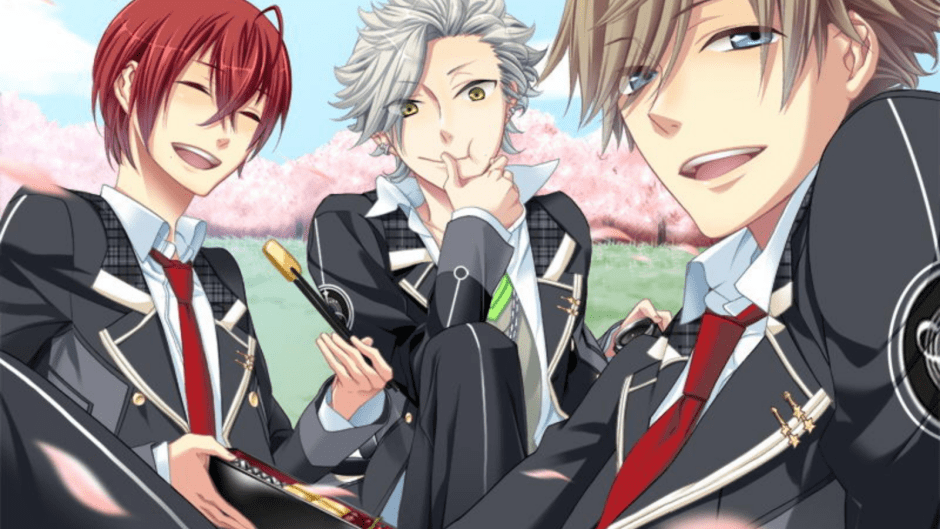 Starry Sky is a series of Japanese PC otome games (has since ported to PSP) developed by software company Honeybee. Starry Sky in Spring released in 2009, is the first game in the series, which centers around Tsukiko Yahisa (name changeable), the first female student to attend Seigetsu Academy. Each game features three love interests, in Spring the three love interests are Yoh Tomoe, Kanata Nanami, and Suzuya Tohzuki. Each love interest has a personality modeled after western zodiac signs. The game was followed by a spin-off sequel, Starry Sky~After Spring~, which takes place between the events of the main game and the epilogue.

Currently the game is not available in English, but there is a free full English patch for the PC version of the game. In order to use the patch, you have to purchase the actual game either on Amazon or elsewhere and then patch the game directly. It’s a process but if it means supporting the game, it’s worth the trouble. Fellow blogger, Cat has written a review of the PSP version of the game.

Tsukiko Yahisa is the first female student to enroll at Seigatsu Academy, a former all-boys school specializing in astronomy. She is closely watched over by her childhood friends, Kanata Nanami and Suzuya Tohzuki, who often protect her from the male student body.

Not long after Tsukiko transfers to Seigatsu Academy, a half-French boy named Yoh Tomoe follows suit to pursue her. This action stirs up emotions from Kanata and Suzuya, both of whom had long loved Tsukiko.

In the game, you play as Tsukiko, a second year student at the formerly all-boys, Seigetsu Academy. The school curriculum focuses on astronomy. Since Tsukiko is a delicate flower in a sea of  testosterone. Our poor defenseless protagonist is constantly at risk from the advances of over sexed teenaged boys. She is closely guarded by her childhood friends, Kanata and Suzuya. Both, harbor an unrequited  love for our oblivious heroine. However, their happy triangle is threatened when Yoh, a half French transfer student joins their class midway through the semester. Yoh and the heroine go way back, having met one summer as children. The addition of Yoh into the mix causes Kanata and Suzuya to take an active role in pursing the heroine. Thus begins a sweet high school romance between childhood friends.

The game is your typical visual novel, you read and you make choices. However, instead of picking a specific route in the beginning, you have access to all of the guys at once. Your choices during the common route and the game determine the guy you end up with. There are usually three choices at a time, each choice corresponds to a different guy. The first guy I ended up with was Yoh, but it was so long ago that I have to replay the game again.

I’m playing the PC version, which is a little different from the PSP and Vita versions of the game. Some of the differences are that the PSP version has three extra CGs (but you can easily find those online), the ability to choose whether you see the heroine’s eyes(which doesn’t matter much, because she has the personality of a wall), and an additional ending, but the differences don’t effect gameplay very much, you end up with the same story either way. If you wanna know more about the differences check out Cat’s post, she’s playing the PSP version of the game and can give you more details on the additional content.

I really enjoyed the game as a whole. The heroine is weak, with all the charm of a brick wall, so I won’t go into much detail there. But, the characters are likable, sure they’re your typical stereotypes: Kanata is the fiery one with a not so secret terminal illness, Suzuya is the selfless big brother, and Yoh is the last minute entry that swoops in and steals the MC from the guys who have been by her side all along.  I favor Kanata more than the others, I’m a sucker for tsunderes, especially when they have a mysterious terminal illness!

The art is wonderful as expected from a commercial game like Starry Sky. The character designs are great, and the character sprites come with a range of expressions and poses. However I had one small, teeny, tiny issue…The way Yoh poses, sometimes makes him look like he’s poking his belly out…which kind of bothered me for some reason…okay moving on…The CGs are great and full of lovely details, however the kiss CGs are…strange. The guys actually kiss the screen…so I guess they want you to kiss the screen or something, you know, put yourself into the game…But, for me it was just weird.

In the PC version, each guy has two endings: the Best (True) Ending and the Good Ending. You’ll know when you get the Best Ending, because the screen will read 5 Years Later, rather than 2 Years Later. All in all Starry Sky is a short, sugary sweet game, and well worth the playthrough for fans of otome and visual novels. I will do individual character reviews for each of the guys as I finish them.