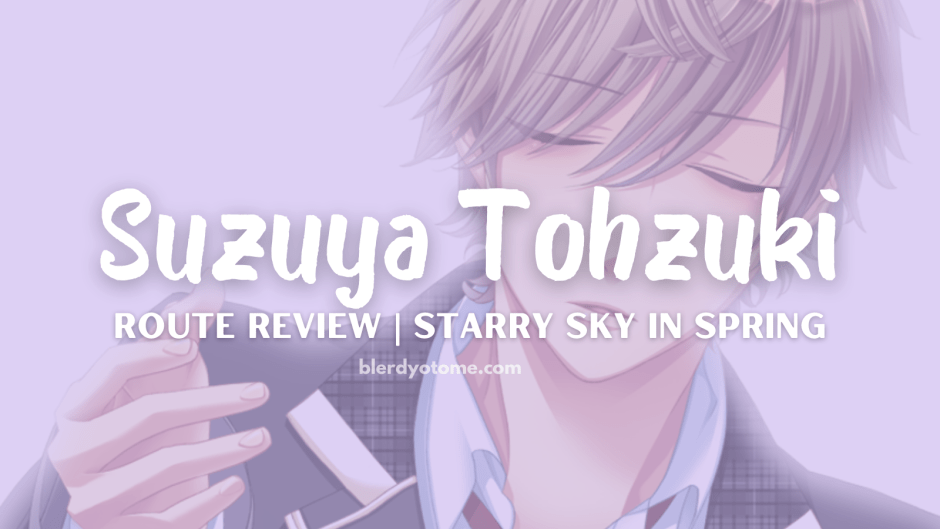 So of all the love interests in Starry Sky in Spring, Suzuya was the one I was least excited about. And after my lukewarm feelings about Kanata and Yoh, I wasn’t really expecting much. Suzuya is the most mature guy in the group and designated Mama Hen. While the others are bickering like children, he’s the one who acts as mediator.

Unlike, Yoh and Kanata, who wear their hearts on their sleeves. Suzuya’s true thoughts and feelings are often shrouded in mystery. He was definitely my surprise favorite of the game.

Suzuya Tohzuki is a childhood friend of Tsukiko and Kanata, and a second year in the Astronomy department of Seigetsu Academy. He is the mature one in the group, and over the years he has become something of a big brother/surrogate mother to the other two. Suzuya is an amazing cook, often borrowing the school kitchens to whip up delicious food for his friends.

He is a source of support for his friends, who all rely on him for advice. Suzuya is the voice of reason, when Kanata and Yoh’s bickering gets too out of hand. He is very much aware of Kanata’s feelings towards Tsukiko (and who wouldn’t be), so he represses his own feelings for her for his sake. But, when Yoh arrives at Seigetsu, all of his carefully laid plans are thrown out of the window. He is forced to confront his feelings or risk losing the woman he loves forever.

Suzuya is a caring and compassionate person, and is more than willing to put the needs of his friends above his own. He’s normally calm, but is a force to be reckoned with when his friends are in trouble. While he doesn’t freak out like Kanata at the appearance of Yoh, he isn’t necessarily happy about it either. He sees Yoh’s presence as the end of their happy little family, and continues to keep his feelings to himself.

In reality, he is extremely jealous of both Yoh and Kanata, who are in their own ways able to express their feelings of love for Tsukiko. He has a little yandere in him (though nowhere near as strongly as Toma), which he shows on occasion. When he and the Tsukiko finally reveal their feelings for one another, he immediately warns Kanata and Yoh to keep their  hands off his lady. That is unless they want to incur his wrath, mind you he says all of this with the biggest smile too.

There are two endings in the PC version of the game, the Good ending which takes place 2 years after the end of the game and the Best ending, which takes place 5 years after the game. Both endings are good, but I definitely prefer the Best ending… In the Good ending, Suzuya  pulls Tsukiko away just before graduation, they have a sweet moment where they vow to always support one another. Suzuya then proposes to Tsukiko sealing the deal with a kiss. In the Best ending, the story picks up during Suzuya and Tsukiko’s wedding. Surrounded by all their friends and family, Suzuya vows to always make Tsukiko happy…the end.

Do I Recommend Suzuya’s Route?

I was genuinely surprised by how much I liked Suzuya’s route. I guess because he was the most calm and collected of the group. He never forces his feelings on Tsukiko, and is content (at least until the end) of watching her from afar. He was the most mature of the group and for that I was extremely grateful! But, when it comes down to it Suzuya is just as capable of Yoh and Kanata of getting jealous.

I was a little annoyed by the constant good guy act, but it’s a welcome change from the other excitable LIs. I found myself sympathizing with him more than I had with Kanata, because he was so calm. He was like a drink of fresh water on a hot day. Suzuya’s feelings really sneak up on you, but once you let him in he’s there forever.

All in all Suzuya’s route was the same cute high school fluff, one would expect from a game like Starry Sky. Tsukiko is just as annoying in this route as she is in the others, but it’s much more bearable because of Suzuya. This guy deserves a prize for sticking with his one-sided love for as long as he did… Tsukiko is definitely not worth the trouble.

Now one thing that really bothered me about this route, were the choices. Every right choice seemed to make Suzuya seem like a last resort or not even a choice at all. It was so frustrating. So while, I enjoyed parts of this route and my overall opinion of it is considerably better than the other guys. I couldn’t help but want more. If you like cute high school romances, this is the game for you! If not, maybe you should pass Starry Sky in Spring up for a more mature game.

9 thoughts on “Starry Sky in Spring | Suzuya Review: The Guy I Like is a Cancer”