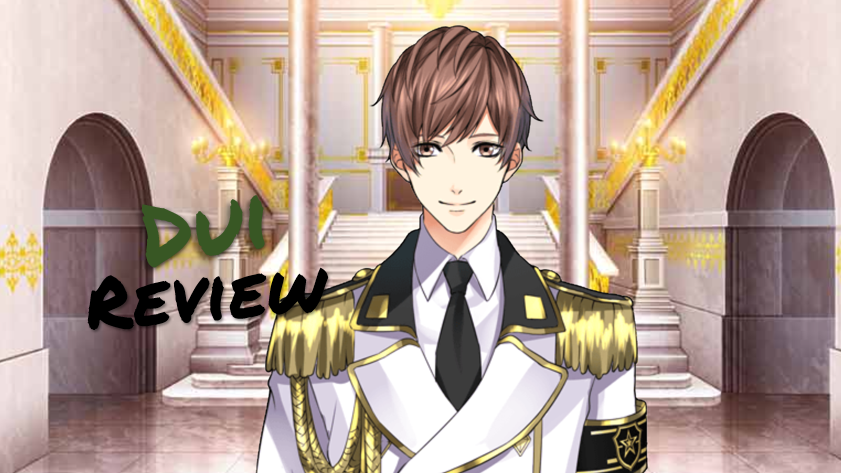 Dui won the poll so I’m writing the review! Rejoice, because without the poll I probably would have never gotten around to play this route in Star Crossed Myth… I know I’m going to get some flack for this, but I had zero interest in ever playing this route…ever. Call me shallow or superficial, but Dui just looked so boring. So, when you guys voted for him to be my next voltage route, I was a little disappointed, but that was before I played this amazing route! 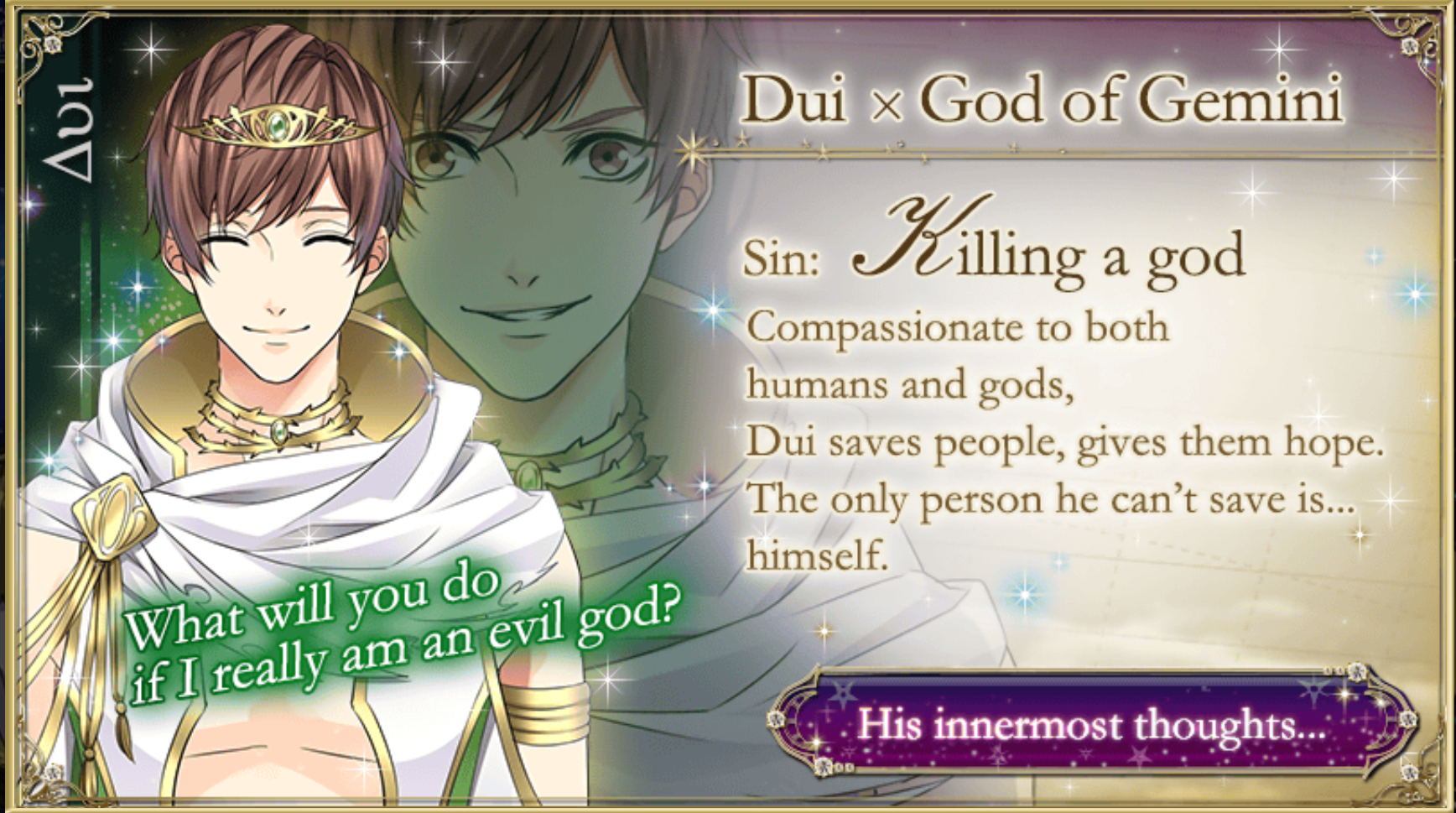 Dui is the sweet as pie, cherry loving god of Gemini who was branded with his mark of sin after killing a fellow god. But, despite the severity of his crimes, Dui isn’t a bad guy, he’s an absolute dream with a bit of a dark side…

Accepting the darkness within

After the MC falls off the roof of the planetarium during the star viewing event she calls out for Dui, because he seems to be the kindest of the gods. Which is a gross understatement, Dui is by far the sweetest of the gods in Star Crossed Myth. In the other routes the gods immediately drag the MC into the business of helping them absolve their past sins. 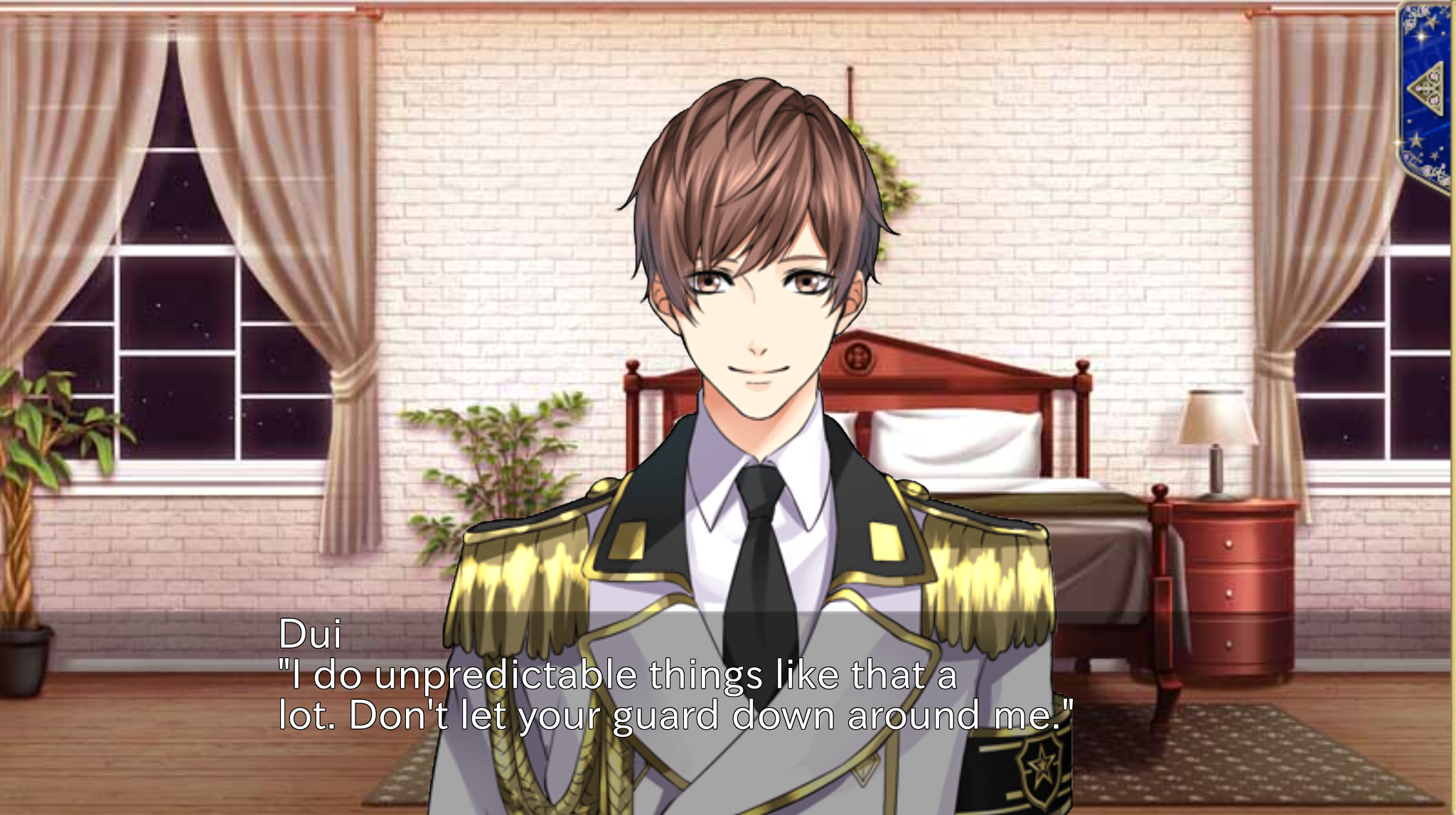 However, in Dui’s route, he actually takes the time to ease the MC into accepting the gods and the situation, by explaining everything to her up front. Unlike the other gods (save Zyglavis), Dui possesses a compassion for humans, that allows him to strike up a deeper connection with the MC a lot sooner than the other gods in the other routes. The relationship between the MC and Dui develops quickly, the MC starts falling for Dui around chapter three and who wouldn’t? Dui is the perfect gentleman; sweet, compassionate, and supportive… Dui would make any girl’s heart quiver!  There are times when his kindness can be mistaken for innocence or childish naivety, but there is a underlying maturity and thoughtfulness to Dui’s personality that is apparent in the way he deals with humans. 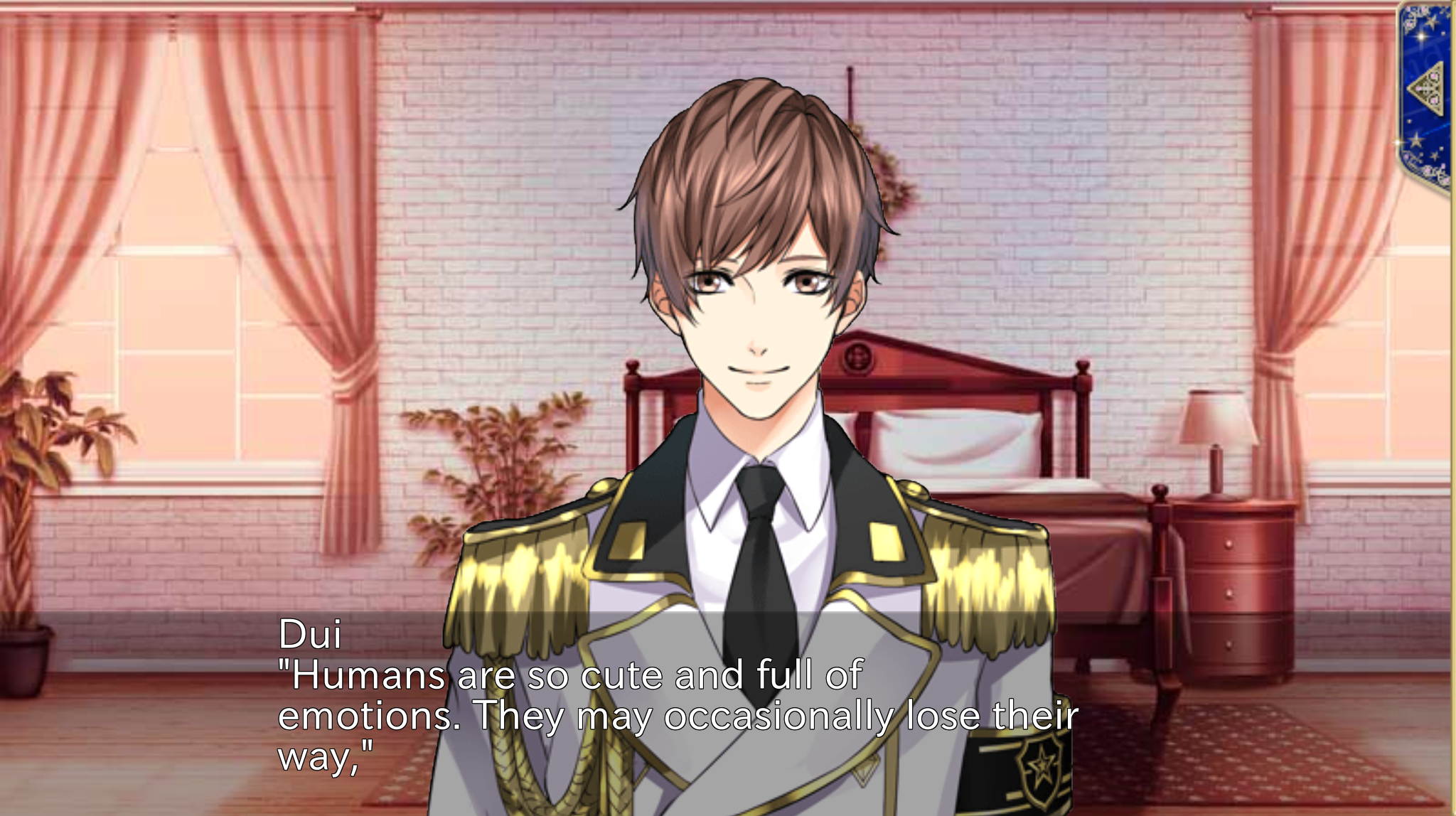 As a Department of Punishments god, Dui is responsible for punishing bad humans. Each of the Punishment gods have their own unique ways of performing their job: Ichthys uses pranks, Scorpio and Zyglavis use harsh punishments, but of all of the “punishment” methods, I find Dui’s to be the most agreeable. Rather than judging individuals solely on their misdeeds, Dui believes that everyone should be given the chance to turn their lives around. So instead of outright punishing humans, Dui takes the time to understand the reasons leading up to each sin and creates a situation that forces the “sinner” to reevaluate their actions and change for the good. 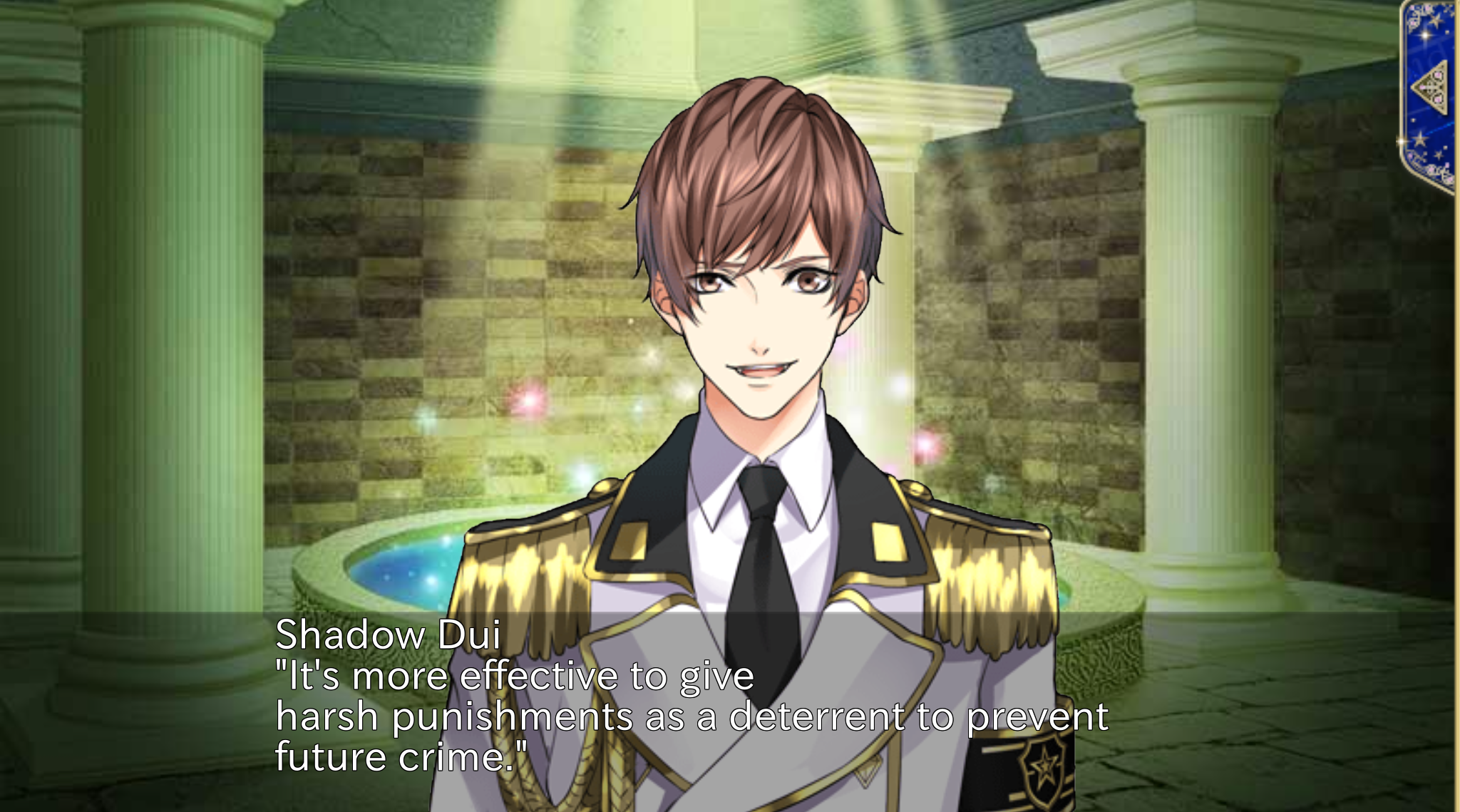 This is going to sound funny, but I couldn’t help but get some serious Edward Cullen vibes from Dui early on in the route. The other gods hint at Dui’s inner darkness from the beginning, but no one outright says anything specific about it until Dui actually snaps. Beneath his gentle and caring nature is something much more sinister, Dui possesses a darker personality dubbed ‘Shadow Dui’ by the other gods. Shadow Dui is the complete opposite of the normally sweet and gentlemanly Dui, he delights in destruction and has no qualms about hurting humans, especially the MC. There are even a few times in the route where Shadow Dui attempts to kill the MC. But, despite his less than gentlemanly personality, it would be unfair to judge Shadow Dui on face value. 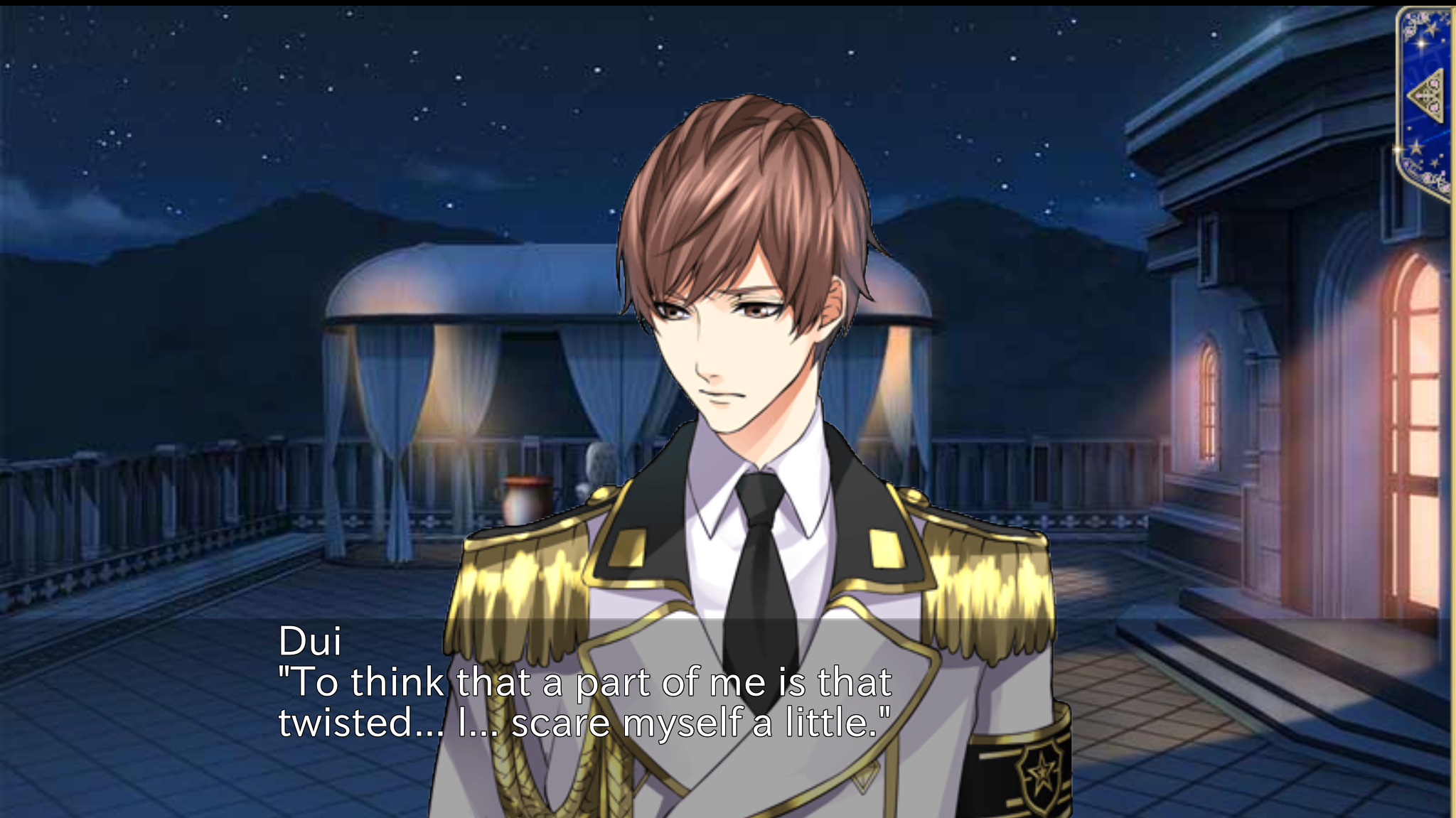 In reality, Shadow Dui is severely misunderstood by everyone, including Dui himself… Both personalities are two sides of the same Dui, so no matter how cruel Shadow Dui’s actions may seem, he’s still Dui and Shadow Dui always has Dui’s best interests at heart. The struggle for dominance between Dui and Shadow Dui is what fuels most of the conflict in this route, but unlike the other routes, this isn’t an external conflict that can be resolved easily. Shadow Dui isn’t an enemy that can be overcome with brute force, like in the other routes, this is a personal issue that Dui has to solve on his own (and with the help of the MC, of course) by coming to terms with his past and finally accepting the darkness within.

All of me loves all of you 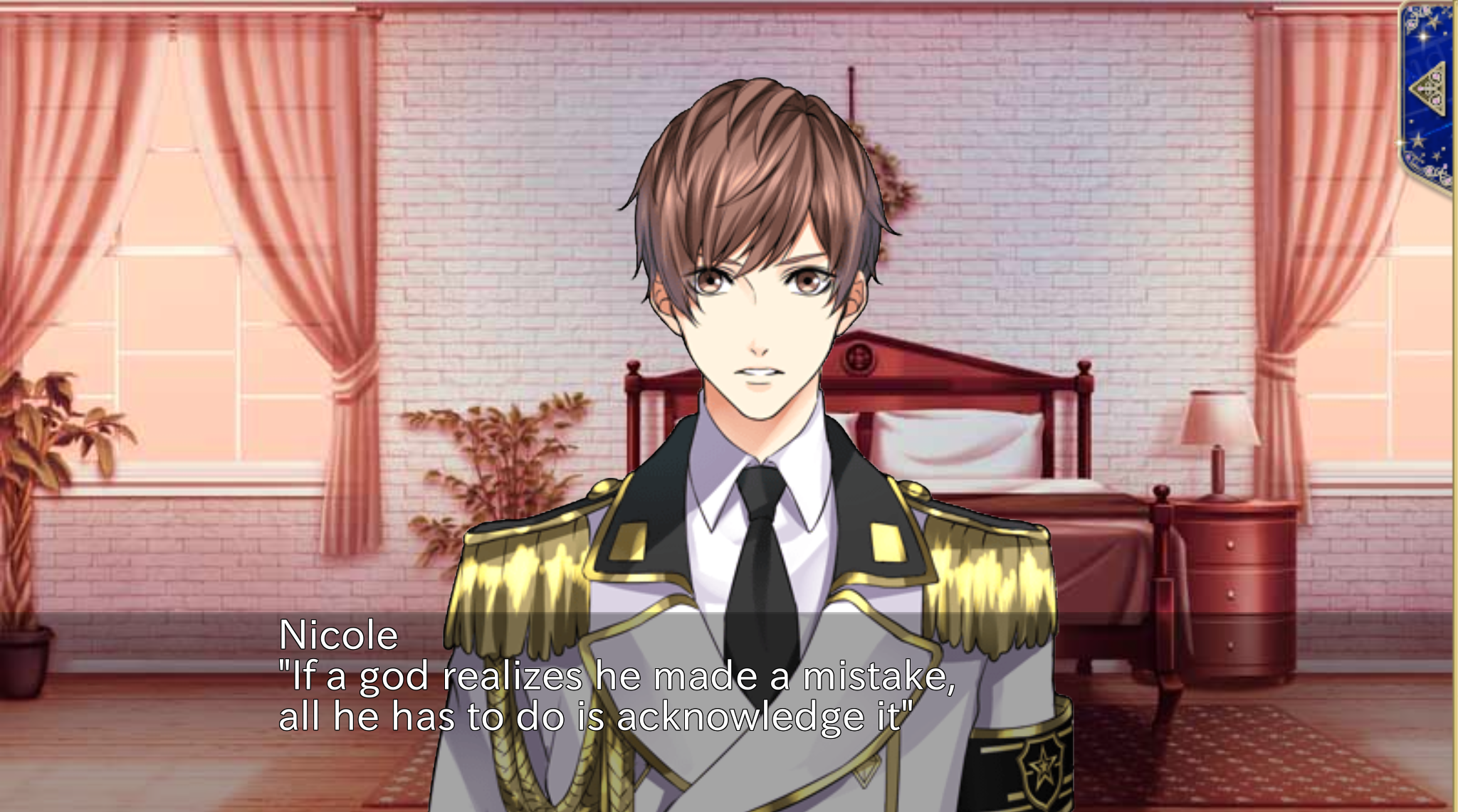 This time around the MC was much more reserved, taking on more of a supportive role in Dui’s overall character development. She is the first person to realize that there is much more to Shadow Dui than meets the eye and it is with her encouragement and support that Dui learns to accept both sides of his personality. While the other gods (Dui included), do their best to suppress the Shadow Dui personality, the MC is the only person that attempts to understand him even if it means putting herself in harms way. She accepts Shadow Dui as a part of Dui, and her love and acceptance is what ultimately leads to the positive outcome at the end of the route.

In terms of romance, this is the best routes in the game so far (mind you I still have yet to play Hue’s route). The writing was spot on and the pacing was great, the romance especially, seemed to develop naturally. The MC doesn’t just fall in love with sweet, compassionate Dui, she falls in love with all of him the good and the bad. It’s reminiscent of how real life relationships are and I found it added a level of believably to the relationship. Plus, Dui is an absolute dream, compassionate and kind, and oh so swoon worthy…

There are two endings in this route, the Blessed Ending and the Forbidden Ending… In the Blessed End, the MC convinces Dui to accept Shadow Dui and the two personalities merge. After everything settles down in the Heavens, Dui and the MC return back to Earth and share a sweet moment alone together. In the Forbidden End, after leaving the King’s throne room, Dui goes off to handle some business in the Department of Punishments. When he doesn’t return after his meeting, the MC decides to search for him. But, instead of finding Dui, the MC runs into a surprisingly gentle Shadow Dui…To be honest, it’s hard to choose which ending I like best; the Good Dui end or the Shadow Dui end… But, if I had to choose, I’d have to go with the Forbidden End, because it seems to be the most fitting conclusion for the story!

In the end, I definitely recommend giving this route a chance, Dui is a complex character and Voltage did an excellent job with his overall character development. Sorry Scorpio, but this is my new favorite route in Star Crossed Myth.

16 thoughts on “My Lover is a Conflicted God: Star Crossed Myth-Dui Review”