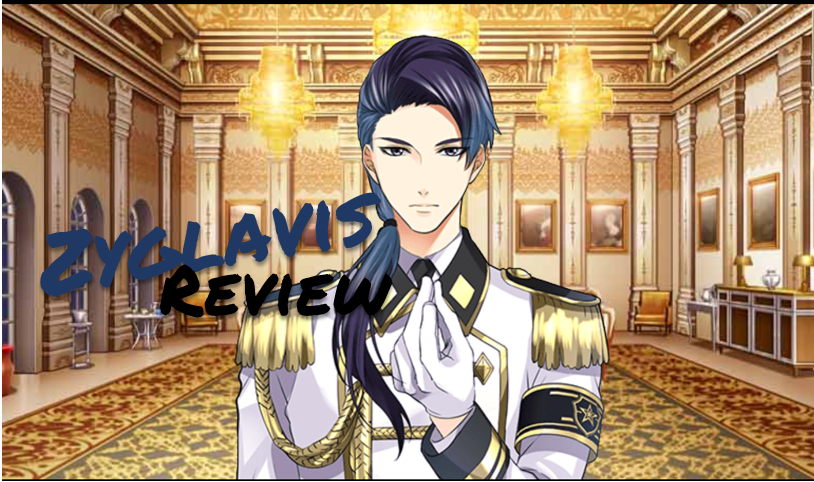 So here I am again binge playing a game on the first day of its release, but Zyglavis was just too good to pass up! I was pleantly surprised by this route, it is awesome! In the beginning Zyglavis is like a mix of Scorpio and Eisuke Ichinomiya, what with the constant spew of insults and the three second response time limit…But the more I played the more I enjoyed the route. This was a rare treat, and I am more than happy to give up a little sleep for this route! 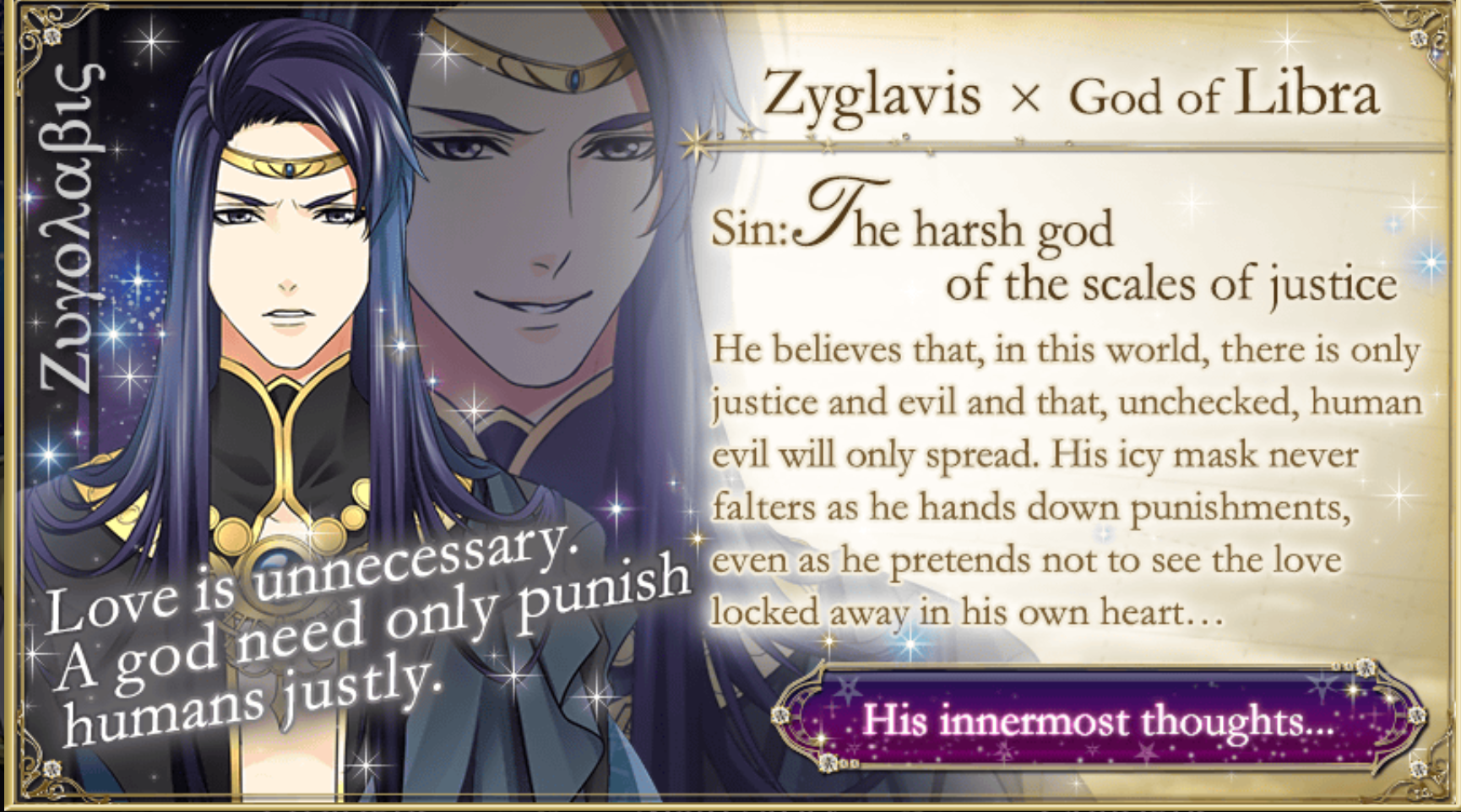 Despite his initial coldness, Zyglavis is secretly the most compassionate of all the gods. Plus he’s gorgeous, just look at him, that long flowing hair, those penetrating eyes…

*Disclaimer: I don’t own these images, they belong to Voltage…and this goes without saying, but there will be minor SPOILERS under the cut…*

Sometime after the first set of gods absolved their sins and returned to the heavens, we find the MC getting attacked by some hooded men. Zyglavis and Karno swoop in and save the MC from danger, and explain that the men are dark gods from the under realm…yeah I swear I’m not making this up…dark gods from the under realm….Well the king of the under realm wants to capture the MC and use her powers to take over the heavens and the Earth, so the king of the heavens orders a new set of god down to Earth for her protection. The old gods and the new start arguing over who gets to protect the MC, so it’s up to her to make a choice… 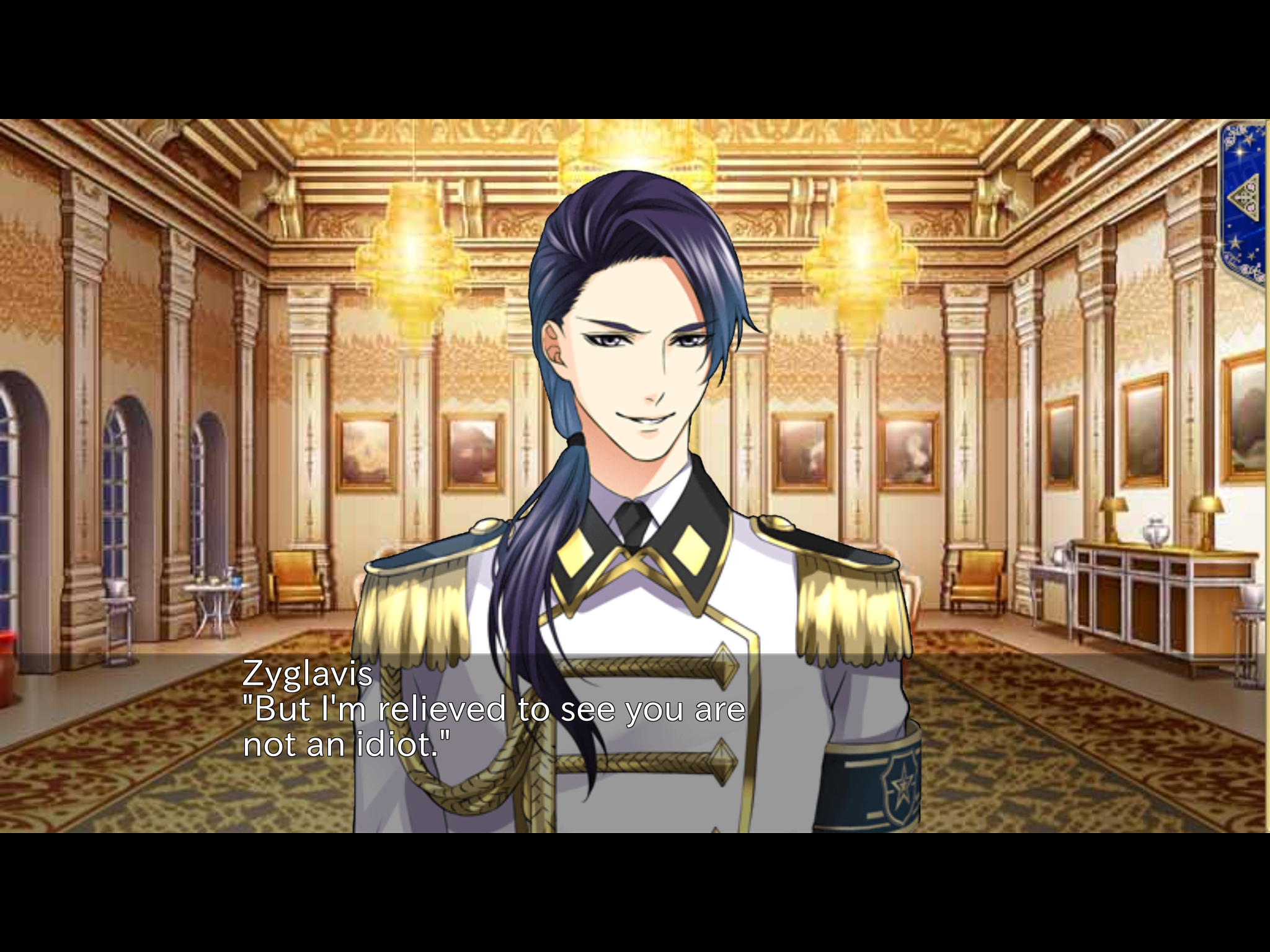 In the beginning, Zyglavis is Scorpio turned up to eleven! Zyglavis is the god of Libra and the Minister of the Department of Punishments. He possesses the power to manipulate shadows, which he uses often to watch over the MC throughout the route. It’s not as stalkerish as it sounds…it’s actually really sweet…but I’m getting ahead of myself. Zyglavis is cold and impassive, taking his job as Minister of the Department of Punishments seriously. He delivers punishment with an efficient iron fist, coldly punishing people without even batting an eyelash. To the MC his “righteous” justice is downright evil, but when she brings it up to him, he shuts her down. But in reality he is the most compassionate of all the gods. He punishes humans in hopes that they will see the error of their ways and repent. But time and time again, people let him down, turning towards evil. 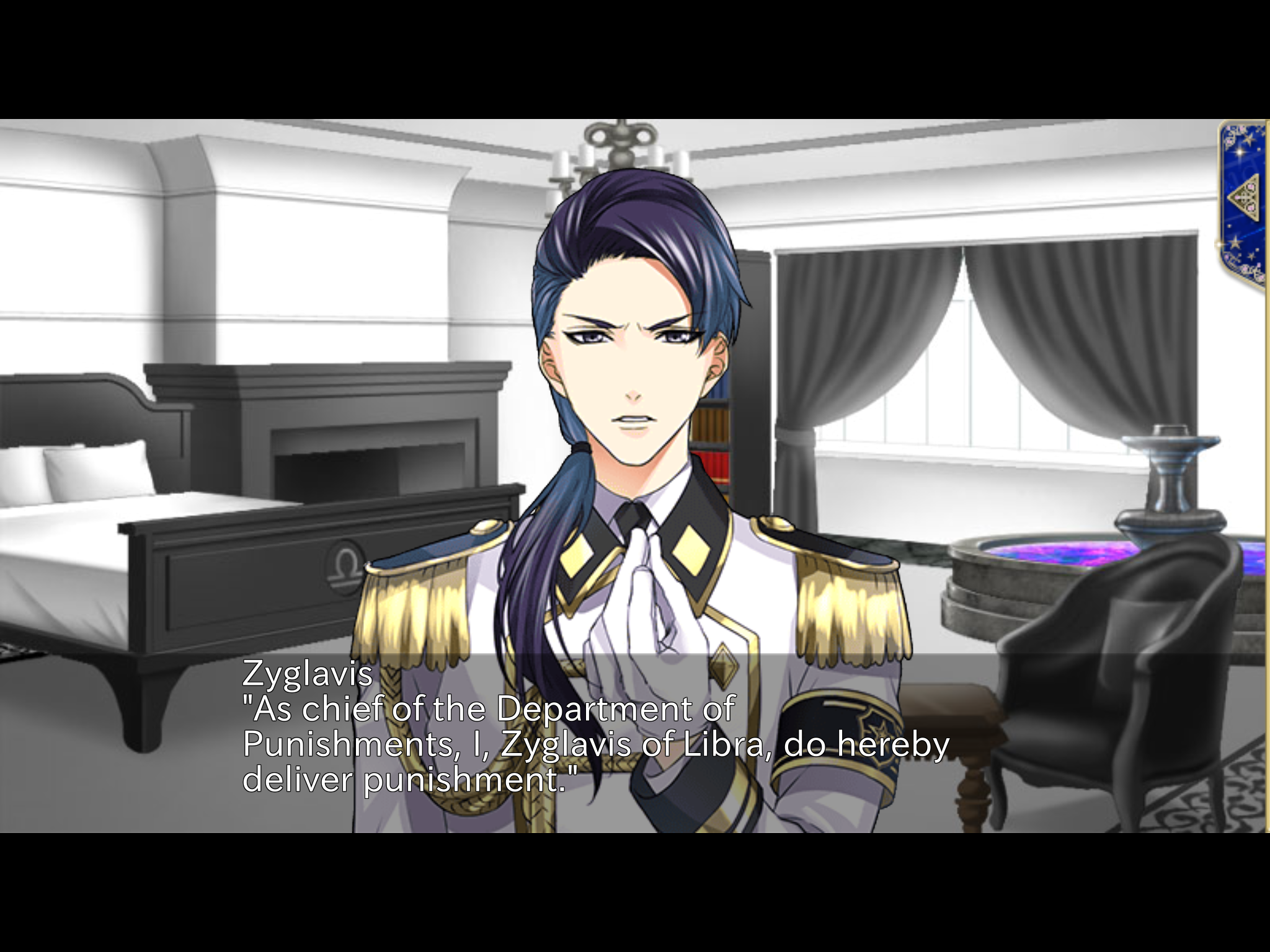 So over the years he has developed his current cold and detached personality in order to protect himself from getting hurt by others. Long ago he trusted that humanity could change for the better, but humans took his kindness for granted becoming consumed by evil, but Zyglavis never gave up on them. Every punishment he has ever doled out has been for the benefit of humanity. Zyglavis really surprised me, at first I thought he was a complete jerk, but the more I played the more I realized how sweet he really is. His relationship with the other gods, while one of respect, is filled with tension, especially when it comes to the gods from the Department of Wishes. He and Leon constantly go at it over little things, but I feel like it is Leon and to an extent Scorpio, that truly understand him best of all the gods. 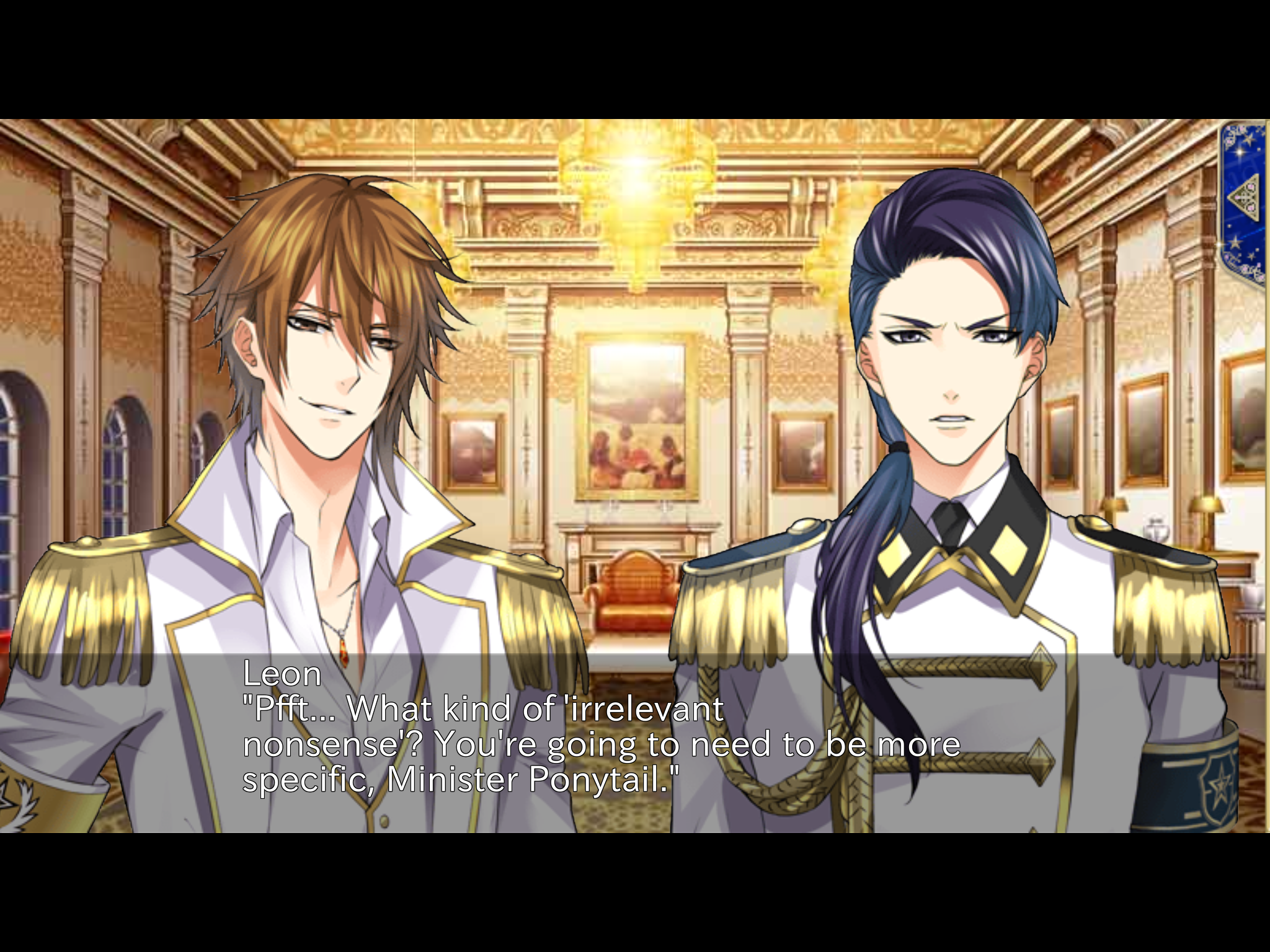 As a Department Minister, Zyglavis has a lot of responsibility, managing to complete his job efficiently, regardless of his personal thoughts and feelings. During this route I realized, excuse my language, just how much of a dick the King of the heavens is…That bastard put such a kind and compassionate god in charge of the Department of  Punishments, knowing full well how much he cares for humans. There were times when I could tell that the task of doling out punishments to humans was taking its toll on him. But in spite of that he never once complains or refuses to do his job. The central conflict of the route was not with the big bad, the Dark King, it was with Zyglavis regaining his trust in humanity. 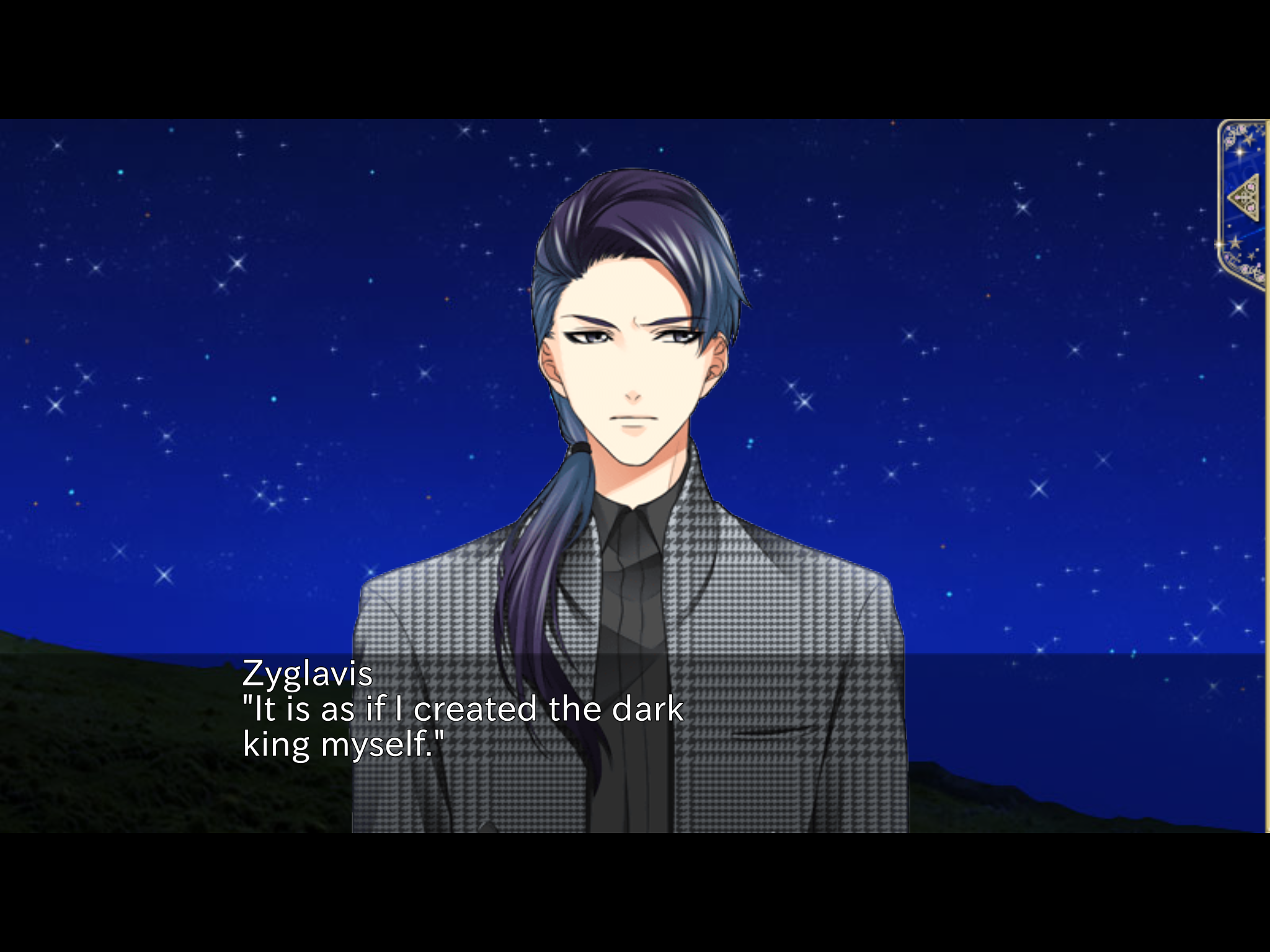 He and the MC try to reform shady CEO’s heart without using punishment. At first it seemed to work, but soon the man regressed back to his old ways. My heart broke for Zyglavis, poor guy just wanted to believe that people could be trusted to change, only to be let down time and time again. His time with the MC allowed him to open his heart, and as a result gain a power he’d never known. I enjoyed his growth over the course of the story, it never seemed rushed or forced. Everything happened in due course making the resolution that much more natural and believable. I especially love how his relationship with the MC developed! They went from constantly being at odds to light bickering, to understanding, and finally to love. His willingness to listen to the MC and his attempts to understand her despite her being a human really turned me on to Zyglavis. He is courteous and kind, a true gentleman and a commendable god.

Crying for Someone Else’s Sake 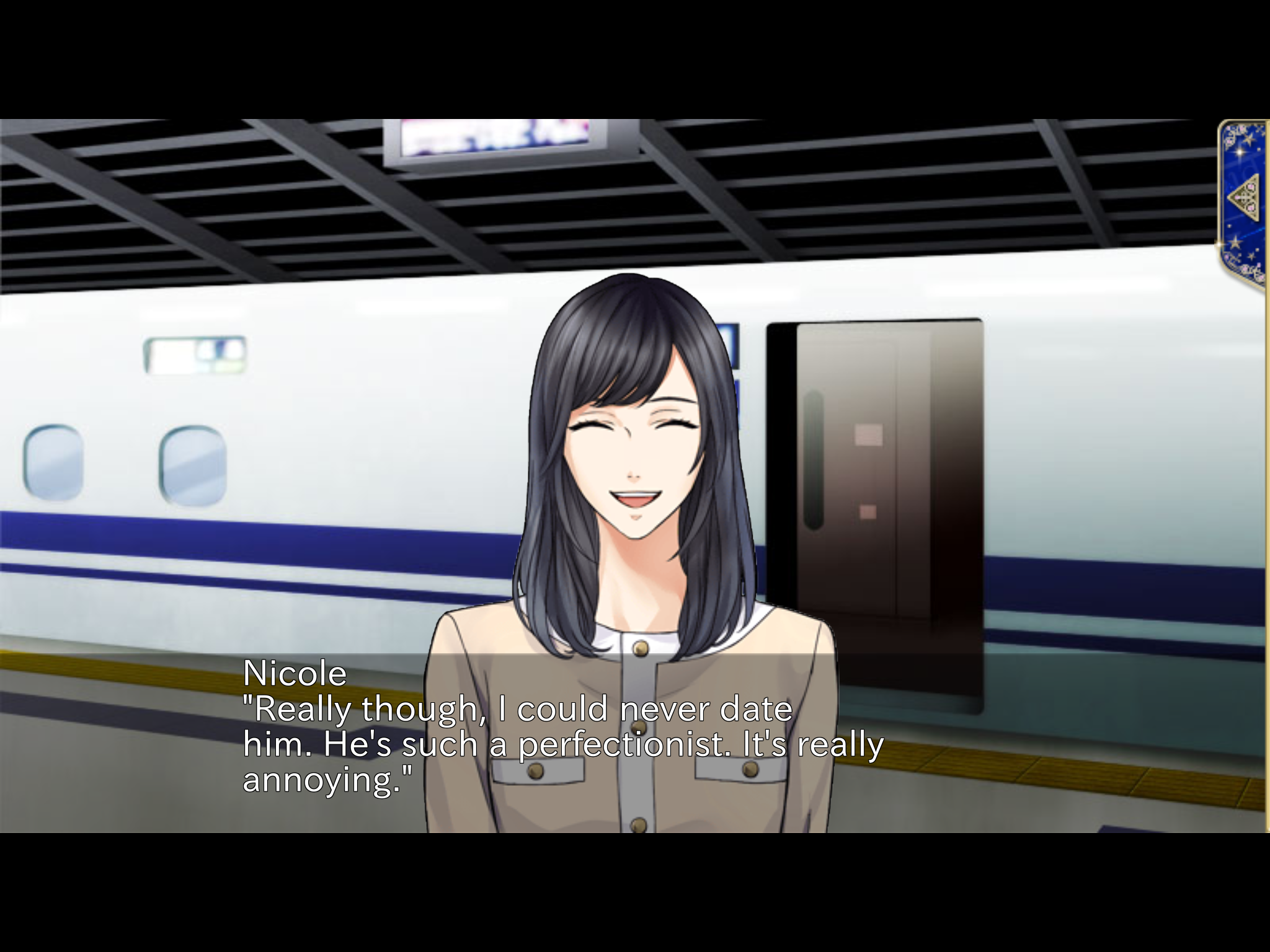 The MC in this route was great, she doesn’t take anything lying down. She is spunky and stubborn, and doesn’t easily back down from her convictions. She treats all of the gods like regular people, standing up to them when they do something that contradicts her morals. I can’t tell you how many times I laughed out loud at the MC’s boldness, it was too much at times. Even the gods themselves find her pluck endearing. She is constantly at odds with Zyglavis and does her best to deter him from punishing humans to harshly, to mixed results. 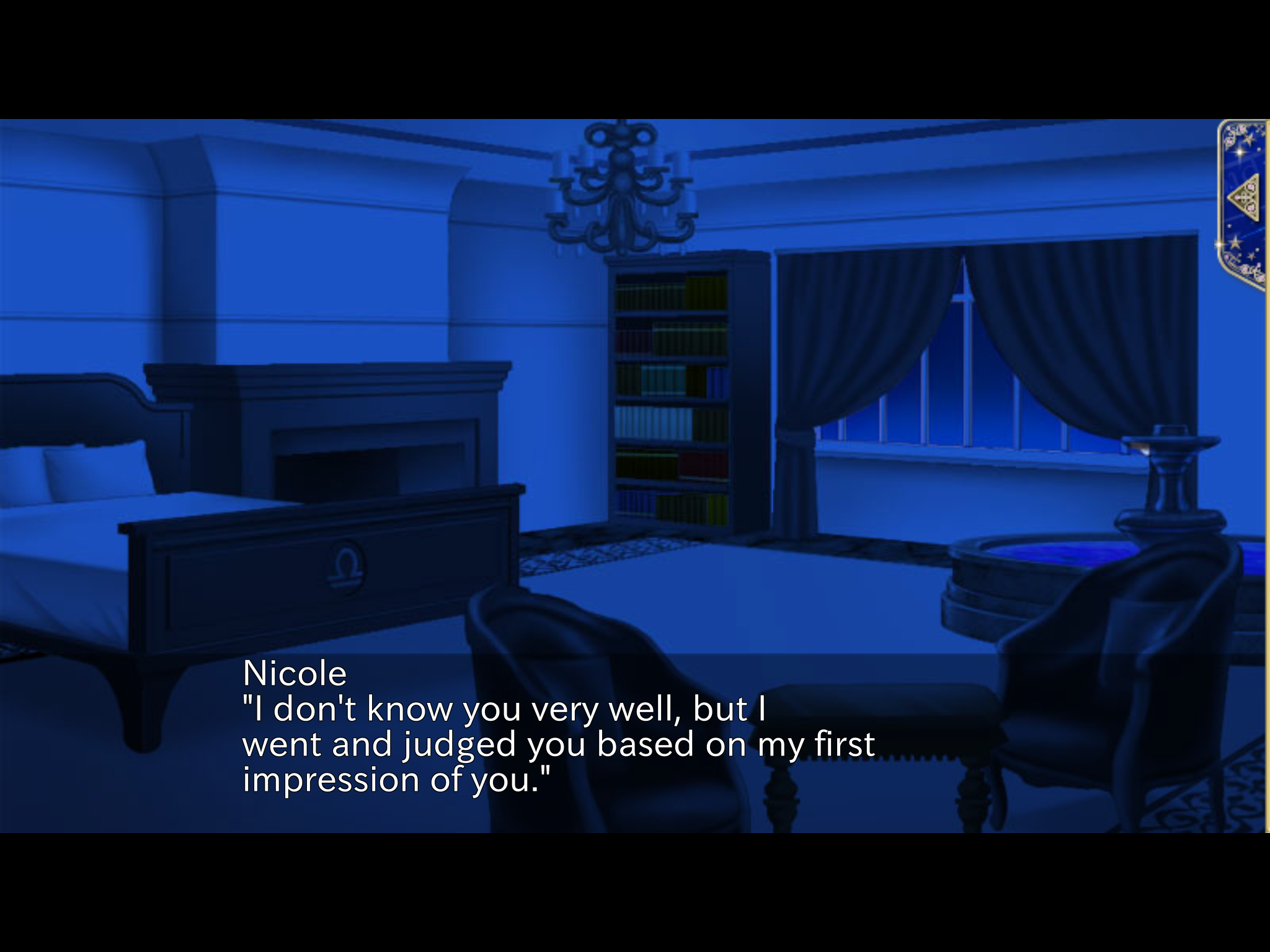 She initially sees him as a cold and heartless god, but the more she spends time with him, the more she realizes how sweet and compassionate he really is. She doesn’t immediately fall in love with him, their relationship takes time to build up. They both learn from each other, becoming better people in the process.Plus the MC has a special power all her own…her tears…Her tears actually cause the Dark King physical harm…and in the end, I believe it was her tears that melted Zyglavis’s closed heart.

I loved this route way more than I thought I would…I think Ziggy is gonna give Scorpio a run for his money as my favorite route of the game. Zyglavis is a sweet honey bun, his cold personality hides a truly compassionate soul. I actually have no complaints for this story…the pacing was great, there were no glaring inconsistencies with the plot or the writing, everything seemed to mesh well. Ziggy’s characterization was believable and never forced, he never had an out of character out burst and oddly enough he is consistent with his portrayals from the other guys’ routes as well.

I really found myself falling hard for this god, no this man! He was everything Voltage promised and more. If you haven’t played any of the routes in this game I suggest you give either this route or Scorpio’s routes a try, you won’t regret it! I highly recommend this route, it was definitely worth the wait!

Do you have any suggestions for posts? Any burning questions? Want me to review a specific game or character? Feel free to Comment on this post or Ask Me on my tumblr!  As always Thank You for reading!

9 thoughts on “My Lover is a Stern God: Star Crossed Myth-Zyglavis Review”