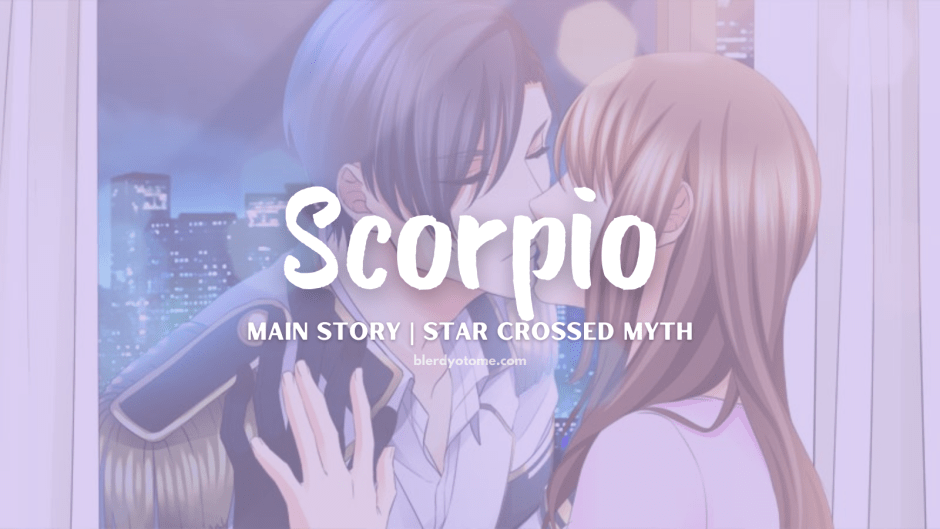 Scorpio isn’t just my favorite Star Crossed Myth character, but one of my favorite Voltage characters. I fell in love with this dark haired god almost from the beginning. Scorpio’s scowl and brooding expression just set my poor fangirl heart aflame. As I have said before I have a type: cool aloof, tsunderes, and snarky ice queens. Scorpio is all of that and so much more. Scorpio is a foul mouthed god, with a penchant for punishment. Which I will admit may be a little off putting at first. His jerk levels at times are on par with the likes of Keith from Be My Princess. But, once he falls in love Scorpio becomes a passionate, if not a tad bit possessive lover.

I absolutely love Scorpio as a character, he and Takuto Hirukawa from Love Letter from Thief X are shining examples of tsunderes done right! It’s a shame that he always comes second to Eisuke Ichinomiya in every poll and tournament.

So this was suggested by voltage-lover-headcanons over on Tumblr. Thanks for the suggestion. I wasn’t sure if I was going to do a review on Scorpio, but your message on Tumblr was so nice, I just couldn’t say no!

Thoughts on Scorpio: Get a Load of the Mouth on that Guy

One night a group of gods from the stars appear before the MC. They claim that she is the reincarnation of a disgraced goddess. Because of here former divinity, she is the only person who can help absolve them of their sins. Once they’re sin free they can return home to the heavens.

So during a star viewing event at her job, the MC end up falling off the roof. Desperate she calls out to Scorpio for help, she remarks that his words made the biggest impression on her. She quickly regrets this decision the moment Scorpio opens his mouth. Every word out of his mouth is an insult. He calls the MC filthy going so far as to wipe his hands after touching her. Scorpio then demands that the MC thank him properly for saving her. But, before he can demand anything concrete a crowd begins to form around you and the gods. In order to avoid the others, Scorpio grabs you and drags you to to the gods’ mansion. Once there the other gods explain that she chose Scorpio and must now help him erase his sin.

Scorpio is the Vice Minister of the Department of Punishments. He earned his mark of sin by using a forbidden power. In addition to his rank as Vice Minister, Scorpio also possesses the power to read people’s thoughts just by touch. In the beginning of the game he can only read the negative emotions of others. But, after falling in love he is able to read people’s positive emotions as well. While Scorpio is god like the others he wasn’t born a god. Instead, he was made one by the King of the Heavens.

Scorpio’s parents sold him to a child assassin group. As a child assassin he was privy to all of the evils of humanity. The King of the gods took pity on him turning him into a god. As a god, Scorpio retains his memories of being a human which only fuel his contempt for them. Scorpio takes special pleasure in punishing humans, going above and beyond what would be considered adequate punishment. It’s kind of funny that Scorpio hates humans so much, because he holds human technology in such high regard. Cold and a tad bit cruel, Scorpio initially wants absolutely nothing to do with humans.

While he works well with his fellow Punishment team members, he isn’t especially close to them. Scorpio has a habit of creating unflattering nicknames for the other gods when he gets annoyed. Though, most of his insults are directed towards the gods from the Department of Wishes, especially, Leon. In the heavens Scorpio has gained a reputation as an unapproachable, but capable leader. He even gains the respect of his supervisor, Zyglavis and the King of the gods. Due to his past as human, Scorpio works twice as hard as the other gods, to prove he is worthy of his position. In the beginning of the route Scorpio is constantly annoyed by the MC. He refuses to call her by name instead calling her “stupid woman” or just “woman” for a majority of the route.

Scorpio and the MC have an antagonistic relationship. His abrasive demeanor and foul mouth managing to keep the MC from getting too close. Despite his rude and downright cruel behavior towards the MC he still shows some degree of concern for her well being. There are several times during his route that he goes out of his way to protect the MC from harm. The more he and the MC spend time together, the more he comes to understand that not all humans are bad and the less mean he is towards her. When he does finally start to fall in love with the MC, he starts to exhibit tsundere tendencies, often blushing when the MC does something especially cute.

There is also a notable change in the way he speaks to the MC; he reduces the amount of swears he uses when speaking with her and he also starts calling her by her given name. Because he is unaccustomed to love and the array of emotions that come with it, Scorpio still manages to come off as insensitive. He is afraid of his love for the MC, attempting at several points in the story to distance himself from her, but he never manages to stick to it. The other gods tease him often about his affection for the MC, accusing him of being too possessive, much to his annoyance.

As a result of Scorpio opening his heart and embracing love, he gains the ability to read positive thoughts, which lead to a number of embarrassing moments between him and the MC.  Deep down Scorpio is an extremely passionate and caring lover, showing his affection (though reluctantly at times) for the MC. The relationship between the MC and Scorpio is gradual and happens alongside his character development, making the whole thing seem believable and more natural.

Scorpio really changes a lot over the course of the story, but it never seems forced, even after he falls in love he still manages to maintain a little of his rough personality. Now there are some aspects of the plot that were just unnecessary. The climax was hastily thrown together and seemed to only exist in order to add closure to Scorpio’s tragic childhood. It was really out of place and took away from the overall plot of the story.

Thoughts on the MC: The Girl with Stars in her Eyes

In the game the MC works in a planetarium and is the reincarnation of a goddess, who gave up her divinity in order to save humanity. The only remnants of the MCs divine past are the stars in her eyes. In this route the MC is awesome, she really renewed my hope in all future Voltage MCs. Not only did Voltage give her a back story, they also managed to give her a personality as well. From the very beginning she isn’t afraid to talk back to the gods, going toe to toe with both Leon and Scorpio on several occasions. She isn’t just a passive bystander to the events of the plot, she helps Scorpio (reluctantly at times) with his punishment jobs and even offers alternative punishments for some of the jobs.

She is integral to Scorpio’s character development, showing him that not all humans are terrible. Once she learns about his past she goes out of her way to understand him, she even pities him. After awhile that pity becomes respect and she does her best to help him in any way she can. Like the typical MC, she has a capacity for compassion easily seeing beyond Scorpio’s cold exterior. She really brings out the humanity Scorpio has tried desperately to hide, and her presence helps make him a better man.

Do I Recommend Scorpio’s Route?

Scorpio is by far one of my favorite Voltage characters! His brooding looks and tragic past instantly won me over, and I often found myself wondering just what kind of guy he really was underneath all of his mean words. Beneath all the thorns and ice, Scorpio is really a compassionate and caring man. His growth over the course of his route seems natural, there isn’t a drastic personality shift like I’ve seen in some stories.

I like that even as far into his story as the Sequel Scorpio still manages to retain some of his teasing, in turn allowing for his relationship with the MC to grow. There is definitely more to this abrasive man than meets the eye. Deep down he just wants to be loved like everyone else. But, because of his past trauma he doesn’t know how to reciprocate positive emotions like love. So it was nice to see him expressing himself more, as the game went on.

Now, while I like Scorpio as a character, I did have some issues with the way his Main story played out. The plot with the child assassins and terrorists at the end was really out of place, Voltage could have really come up with a better way to address his tragic childhood. This plotline is completely unnecessary and I’m so glad it doesn’t come up again in later stories. Scorpio’s Sequel is a big improvement on his main story, plot-wise.

There are two endings available in this game: the Blessed Ending and the Forbidden Ending. To be honest I prefer his Blessed Ending to his Forbidden Ending, it fits better with his overall progression as a character, and seems like the most natural outcome. The Forbidden Ending does have its merits, though, and you should definitely give it a try either way. Also, if you buy the ending set, you can listen to a voiced video at the end of his MS (I absolutely love his voice actor)!

So, despite the wonkiness with the ending of the MS, I highly recommend Scorpio’s route, he is a cold-hearted bastard with a heart of gold and I love him all the more for it. Definitely give him a try if you haven’t already, he’s definitely worth it!

22 thoughts on “Star Crossed Myth | Scorpio Review: My Lover is an Abrasive God”