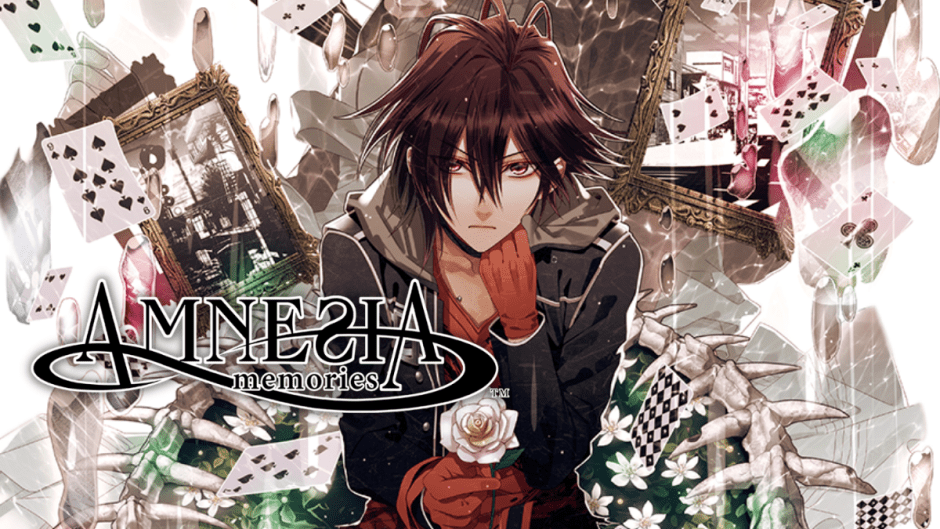 So I finally got around to finishing my first route in Amnesia: Memories! Yay! *throws confetti* As always, I’m a few months behind the rest of the otome community. But I can live with that. I took my time playing this one, and I’m kinda glad I did. There was a lot going on with this game. Don’t get me wrong I enjoyed the game, it was fun, but there were some things that I had problems with.

So you (name changeable) wake up one day in a strange room with absolutely none of your memories. But that isn’t the strangest thing, nope, in front of you is a weird looking boy with horns, named Orion, who claims to be the cause of your recent bout of amnesia. The conversation then takes a turn for the bizarre, when Orion explains that until you regain your memories, he will remain trapped inside of your head.

He vows to help you regain your memories so that he can escape your head and go back to doing whatever it is he was doing before he wound up in your head. After agreeing to help Orion you then get to choose one of four worlds to awaken in: Heart World, Spade World, Clover World, or Diamond World. In each world you will meet a man who claims to be your Boyfriend/Lover and you will have to piece together your memories while uncovering the secrets surrounding your “Lover” in each world.

So I mentioned earlier that I had some issues with the game, the main issue is the MC! I have seen some pretty weak MCs before, but this is ridiculous. She doesn’t talk at all not a word. So for a majority of the game the only dialogue we get from the MC comes via Orion. Most of the time it felt like the other characters were talking to themselves. We didn’t even get any of the MC’s thoughts to help fill in the gaps. NOTHING!

The art in the game was pretty and all of the CGs were beautiful, so no complaints there. Now I will say that the clothes the characters wear are kind of strange. I think I laughed when I first saw Shin’s pants and boots. Not that they aren’t pretty to look at, it just seems like everyone in the game is on their way to a cosplay convention. The sound/music was okay. There were a few times when I had to lower the BGM so I could hear the voices. But otherwise no complaints.

The Verdict: Is Amnesia Memories Worth Playing?

There are three types of endings in the game: GOOD, NORMAL, and BAD. When they’re good they’re good, and when their bad…you die…So keep that in mind when making your choices. During my first playthrough I got the Normal ending. Then I got one of the Bad endings, finally after three playthroughs I got the Good ending. The GOOD ending usually has the MC regain her memories and solve the mystery surrounding her lover/boyfriend, and ends with a sweet/romantic moment. The NORMAL ending has the MC regain part of her memories and/or solve some of the mystery surrounding her lover. While the BAD ending is usually a GAME OVER scenario.

Overall I enjoyed the game, and I am glad that game companies are starting to localize more and more games. Support the game by purchasing a copy from one of the following locations: STEAM, IOS, Google Play, or Buy the Hard Copy from Amazon or your local Game store.