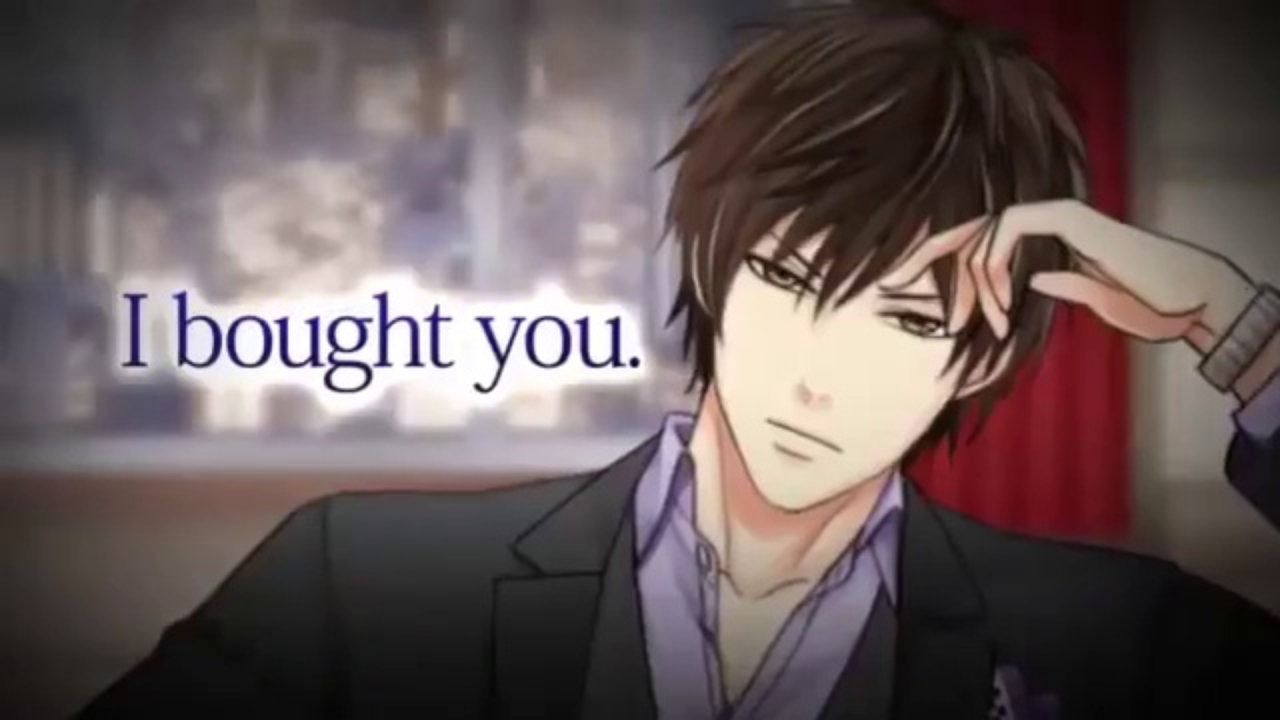 Out of all of the available guys in this game, Eisuke Ichinomiya is by far my absolute favorite! He is literally the ultimate otome man, with his handsome face and deep pockets, he’s the total package… But, that’s not all there is to him, when you look beyond his good looks and money, Eisuke is one of the sweetest most compassionate men I have ever had the pleasure of romancing in an otome game! 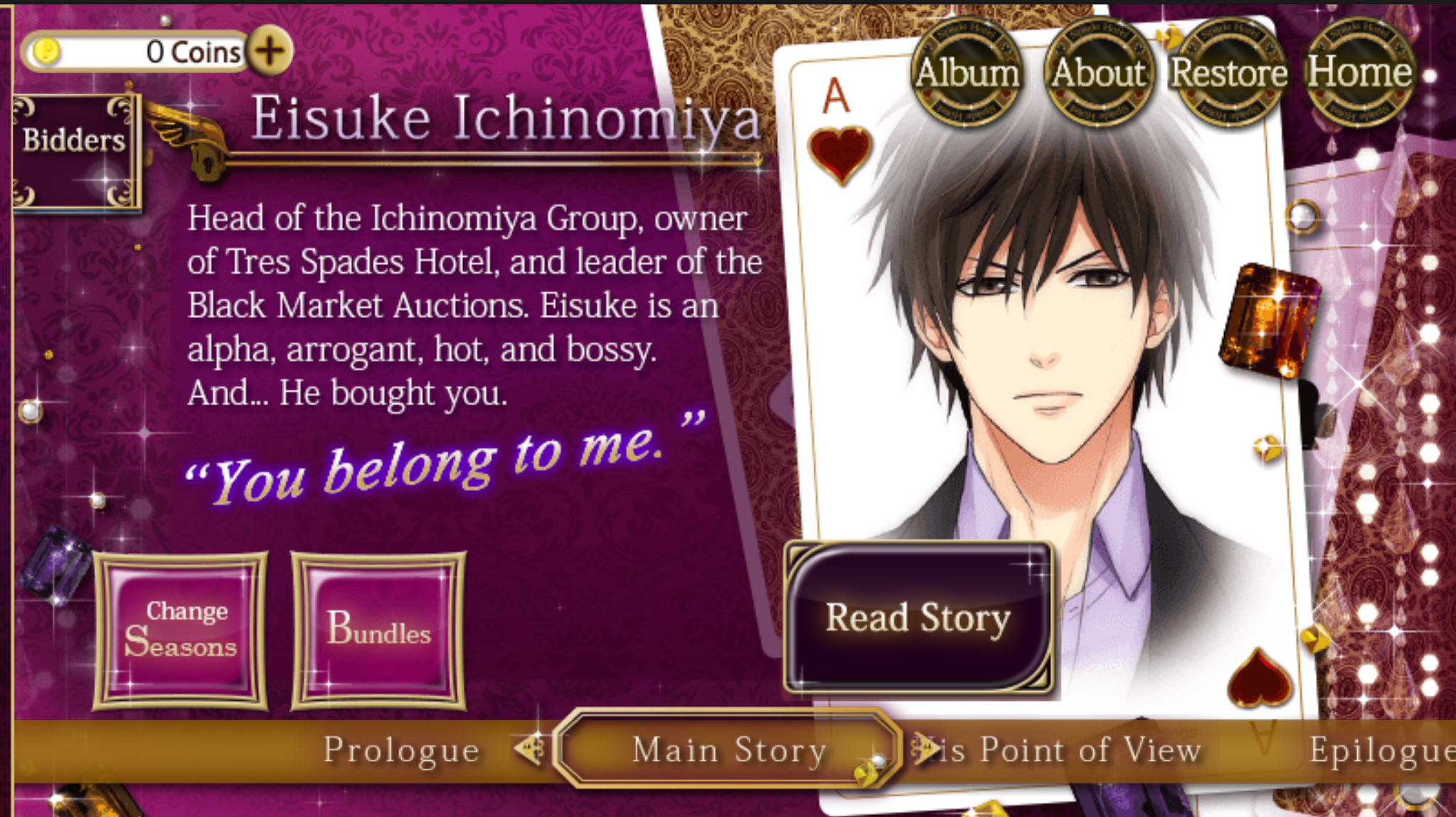 After the MC finds herself up for sale at a secret black market auction, she fears that she will become the plaything of some sick sadistic bastard… But, lo, Eisuke swoops in like an avenging angel to save her from a life of abject servitude and lavishes her with love and affection!

Eisuke Ichinomiya is the owner of one of Japan’s largest hotels, Tres Spades! Despite his young age, Eiksuke has made a name for himself among Japan’s elites, with his dashing good looks and unparalleled business sense, homeboy has it going on! Women flock to Tres Spades in hopes of merely basking in his presence, but Eisuke has no time for them, he’s more concerned with maintaining the integrity of his hotel and the charitable auctions he periodically hosts. Eisuke is a philanthropist at heart, and if anyone says otherwise they were simply mislead by Voltage’s unfair character bio. It’s tragic how bad of a rap this man gets he truly has a heart of gold, just take a look at the auction he hosts, he acquires rare and expensive items from all over the globe (legally mind you) and he auctions them off in order to help those in need! 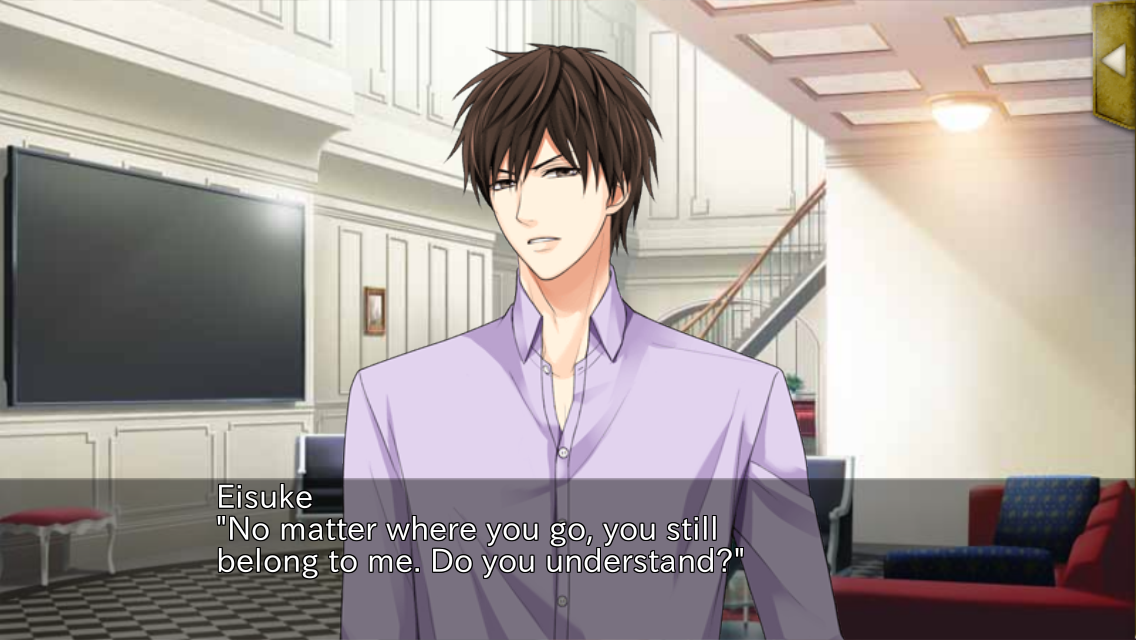 So when the MC showed up as one of the items for sale, Eisuke immediately put his foot down and rescued her! He didn’t bid on her like some savage, that sort of thing is beneath him,  he just marched up onto that stage and shut the entire auction down, it was truly a sight to behold! He then took the MC up to his penthouse suite until she recovered enough from the whole sordid ordeal to go back to work. He even offered to personally investigate the circumstances surrounding her being put up for auction. Of course the MC was so enamored with her savior that she offered her services as his personal in house maid, in order to pay him back for his kindness. Eisuke tried to refuse, but the MC was adamant about returning the favor, so he allowed her to take care of light housework around the suite, namely making his coffee.

Not once did Eisuke force the MC to do anything she was uncomfortable with, he was considerate of her needs, even giving her time off when she began to feel too overwhelmed by her duties. There were times when Eisuke would literally, I kid you not, put his life on the line to protect the MC from harm! Not to mention, he lavished her with expensive clothes and gifts, because his generosity knows no bounds… That Eisuke is a class act, a true one of a kind gentleman! Voltage just doesn’t write stories like this anymore! But, enough of my fangirling!

The romance in this route was some of the best I have ever read in an otome game! Eisuke’s courtship of the MC was simply beautiful, it was love at first sight for the wealthy hotel owner and the MC is lucky to have captured the heart of such a wonderful human being! I just don’t have the words to describe how simply fantastic Eisuke is, he made me feel such strong emotions! KYAAAAAAAA! Eisuke is a character that feels things on a deeper level than most people, making him one of the most endearing characters Voltage has written to date!

This is by far my favorite route in the game, Eisuke is a prince!! I only wish such a man was real so that I could have a chance to meet him and fall in love with him! The money and good looks are just icing on the cake, Eisuke is the perfect man, sweet, attentive, compassionate, patient, and did I mention a wonderful lover! He really knows how to make a woman feel special and he never once does anything to cause the MC emotional distress.

So, if you’re wondering, I highly recommend NOT playing this route at all! I absolutely loathe Eisuke, the spoiled, stuck up ass! I swear to God, this route made me sick to my stomach the first time I played it! Yeah, he gets better in his subsequent stories, but this twisted stockholm syndrome-esque relationship is unhealthy and horrifying! Happy April 1st everyone!!

19 thoughts on “The Guy I Like is Filthy Rich: Kissed By The Baddest Bidder- Eisuke Ichinomiya Review”