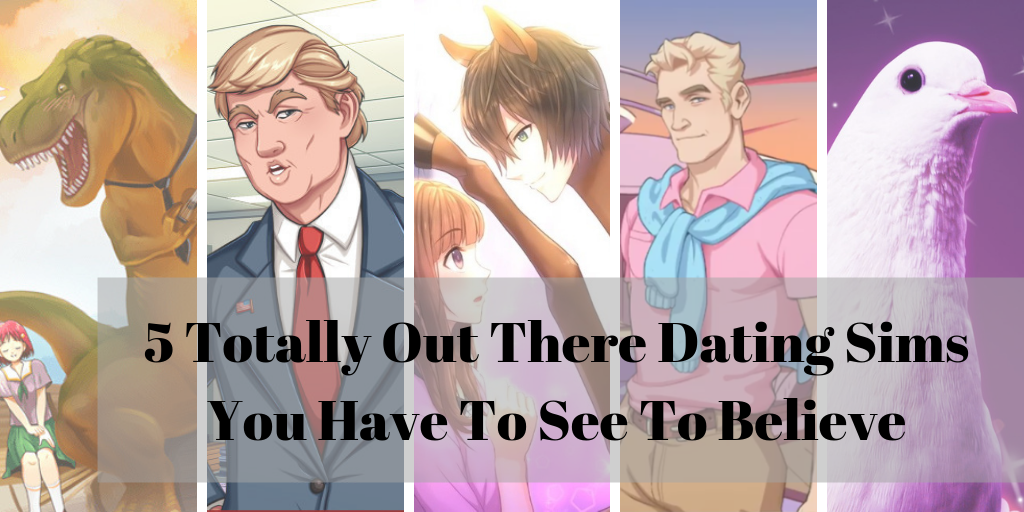 In the wake of KFC’s I Love You, Colonel Sanders! A Finger Lickin’ Good Dating Simulator announcement the internet is abuzz with delight at the prospect of dating the fast food chain’s chicken loving mascot. The concept is the brain child of UK based studio Psyop, and promises a unique gaming experience full of cooking battles, delicious finger lickin’ chicken recipes, and of course the chance to romance the Colonel himself.

While most of the internet is eagerly awaiting the latest parody dating sim, some in the otome community are worried the upcoming game will do more harm than good to an already niche genre. I’m always down for a good laugh, so I’ll probably check I Love You, Colonel Sanders! out when it’s released on September 24th on Steam.

However, this isn’t the first dating sim parody game (and it most likely won’t be the last). There are quite a few dating sims out there that are sure to have a few people scratching their heads, so of course I did what any sane person would do and compiled a few of them into a list… Your welcome.

My Horse Prince (Uma No Prince-Sama)

What better way to kick off this list than with My Horse Prince. Some folks are convinced that this was just a figment of our collective imaginations, but I assure you this human faced horse is very real. Saddle up for a romance between a normal woman and Yuuma a race horse with the face of a dashing prince… When Yuuma’s jockey gets injured you are tasked with making sure Yuuma is prepped for an upcoming race. Feed him, brush him, and help him train by performing a series of random activities… like cooking… playing in a rock band… and surfing? Yeah, totally normal horse stuff!

Can you believe it’s only been 2 years since YouTubers Game Grumps blessed us with their single dad dating sim, Dream Daddy? Create your own Dadsona and woo the 7 eligible DILFS living in your new neighborhood. Each dad has their own unique personality, so there is definitely a daddy for everyone. My personal favorites were Matt, with those sexy bedroom eyes and Craig, the athletic daddy… But, who could pass up preppy youth pastor Joseph or Goth daddy, Damien? Like everyone else, I bought the game for the LOLs and I was genuinely surprised to discover that this was actually a pretty fun game… that is if you’re okay with a LOT of bad Dad Jokes. So, who’s your Dream Daddy?

I could not in good consciences write this list without including the OG WTF dating sim, Hatoful Boyfriend, the game that made a bunch of birds sexy. I was skeptical, I mean really, how am I supposed to take a dating sim about a bunch of birds seriously? They’re birds for crying out loud! Trust me, this game is not  for the feint of heart, Hatoful Boyfriend is a surprisingly dark. Most of us showed up for the LOLs and got hit with the mother of all emotional gut punches. Who knew a game about dating birds could have so much depth? And murder… 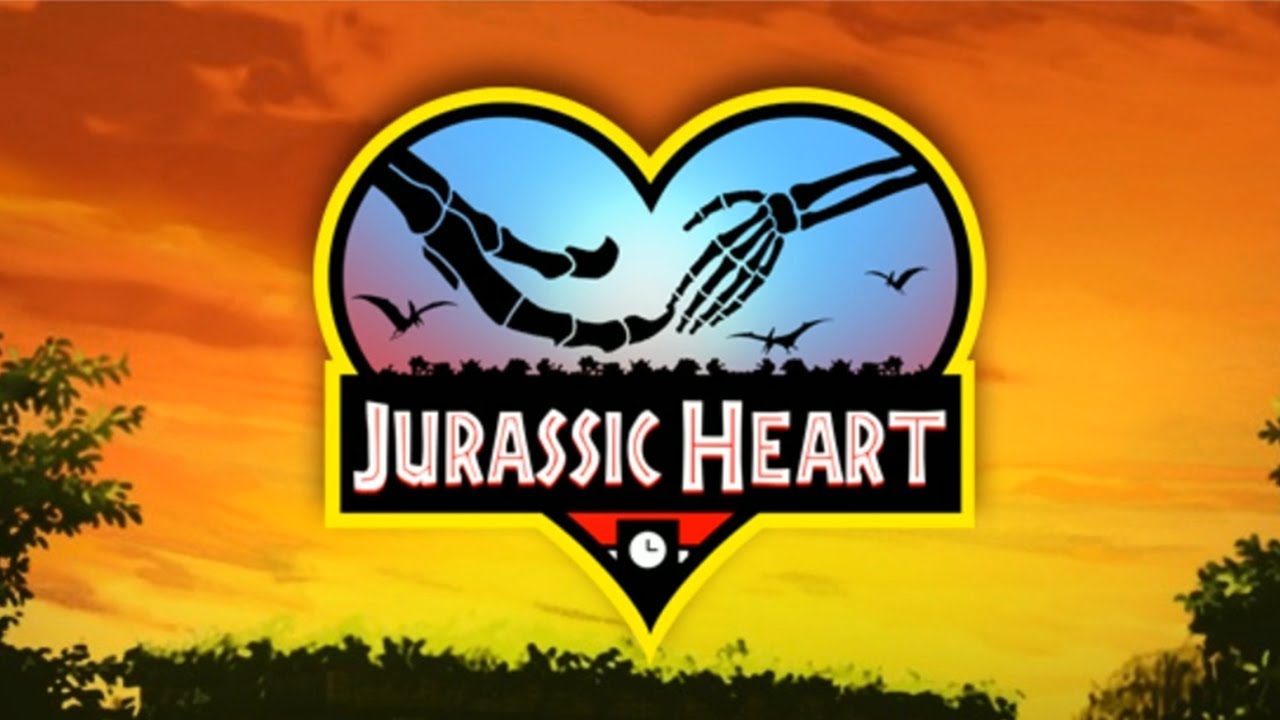 Alright, so if angsty birds and surfing horses aren’t your style, have you ever considered an ukulele playing T-rex? This short and sweet browser dating sim was created over the span of two days for the Heart-Pounding-Pulse Stopping Dating Sim Jam back in 2014. You take on the role of a young girl who finds herself slowly falling for Taira a shy, yet talented ukulele player, who just happens to be a big, hulking T-rex. I have played my fair share of dating sims, otome games, and visual novels, but never have I ever played one with such a bizarre premise that was just so earnest. Jurassic Heart, is definitely big on laughs, but there are some really sweet moments that you almost forget your love interest is a carnivorous dinosaur… 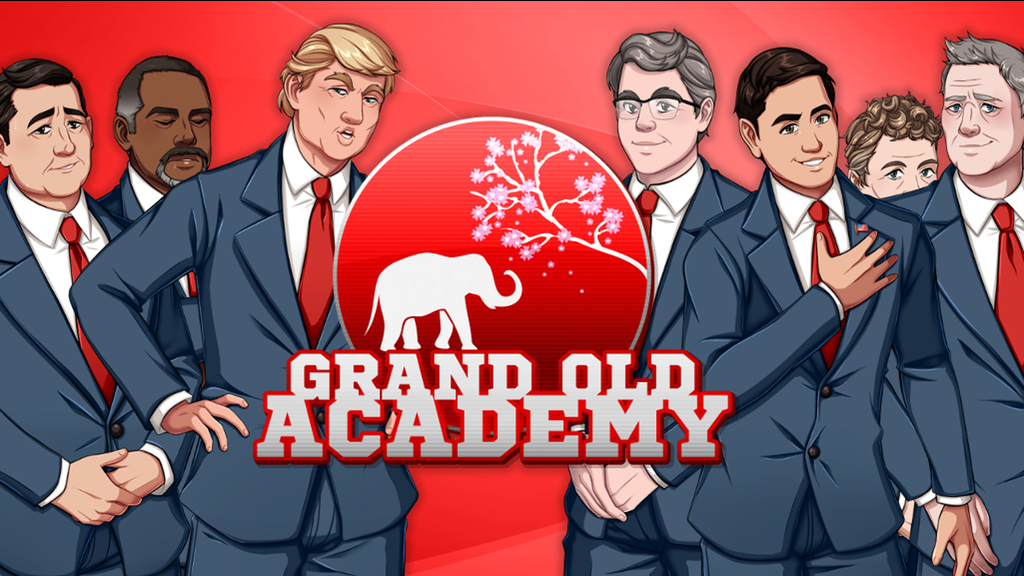 So, technically this one is just a demo, but with a premise like this I just had to add it to the list. Grand Old Academy is the dating sim no one really asked for, but exists anyway… Have you ever wanted to date the 2016 Republican Presidential Nominees? No? Well, in Grand Old Academy you have the chance to date the GOP nominees, instead of hot bishies, you can romance the likes of Ben Carson, Jeb Bush, and even, current President Donald Trump… the gangs all here in this oddly entertaining light hearted satirical demo. In the game you play as a Japanese transfer student that gets drawn into the riveting world of debating at the prestigious Grand Old Academy. Meet and fall in love with one of the seven debaters as you navigate the ups and downs of your new school.

Laugh It Up With These Parody Dating Sims

Whether you love parody visual novels or hate them, there is something to be said for these satirical narratives. I personally don’t mind them all that much, since I’m always down for a good laugh and these parody games are usually a nice reprieve from some of the heavier titles out there. Besides, with all the negativity floating around in the real world, sometimes you just need something that’ll make you laugh.

So, if you’re looking for something lighthearted to get you through the week, check out one of these parody visual novels! You might be surprised by what you discover.