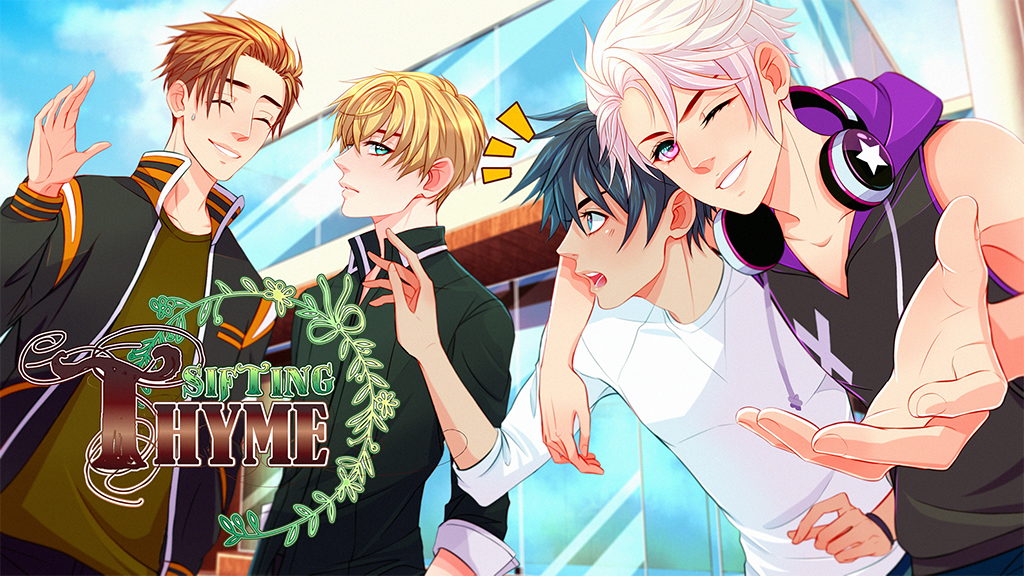 Sifting Thyme is a cooking themed mobile otome game developed by indie studio, Nochi Studios. In the game you play as the newest transfer student at a prestigious culinary academy. Immerse yourself in a world of food as you start out your culinary journey—learn about the food industry, while getting to know your talented classmates. The game was originally released episodically, with new chapters being released monthly. Earlier this month the final chapter was released, and I figured now was the perfect time to review the whole game!

Cute boys and good food… what’s not to love? If you’ve been following me for awhile, you know I’ve kind of shied away from mobile games in recent years—mobile games can take up a LOT of space on my phone. But, Sifting Thyme is such a sweet and chill game, it was totally worth the download.

You’re the newest transfer student at Lincoln Culinary Academy, a private culinary school and the perfect start to your path towards finding your culinary calling. Immerse yourself in the vibrant world of food, business, and innovation throughout your school adventures. But you’re definitely not alone in this journey, as four gorgeous guys with culinary skills of their own await you to make your experience at Lincoln worthwhile.

Together, you will explore the world of food to forge relationships, engage new challenges, and aspire to make each other’s gourmet dreams come true. 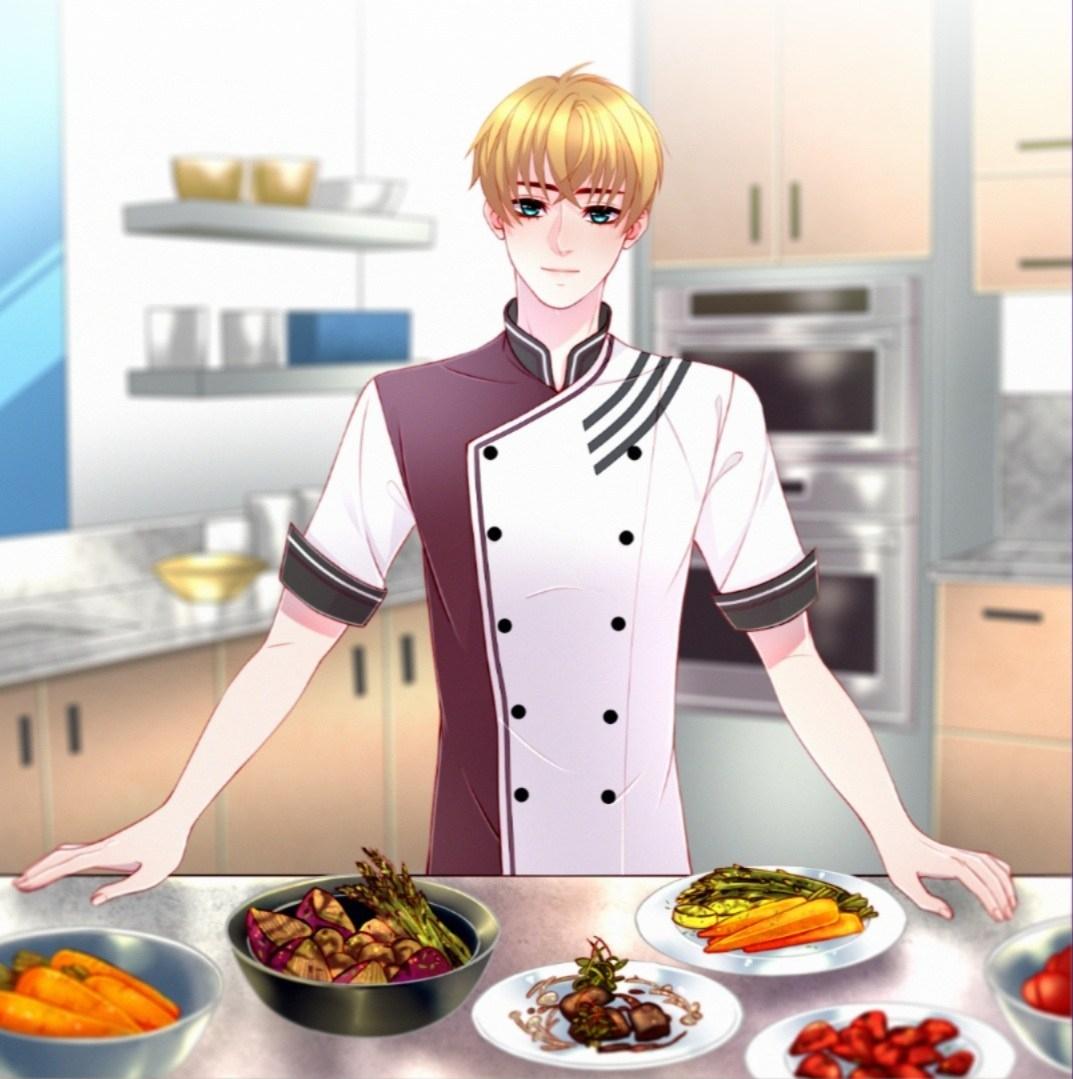 Leo is an upperclassman who comes from one of the most prestigious culinary families, because of this he is lauded as one of the best students at Lincoln Academy. His culinary pedigree has earned him quite a bit of attention among his classmates, but Leo doesn’t really like being in the limelight. He comes off pretty standoffish and overly critical of others and I will admit I didn’t really like Leo all that much in the beginning. But, once you get to know him, Leo really isn’t a bad guy, he just has a lot of pressure on him to live up to his family’s name. He takes a more straightforward approach with his cooking, planning out every detail in advance and executing his ideas with pinpoint precision. 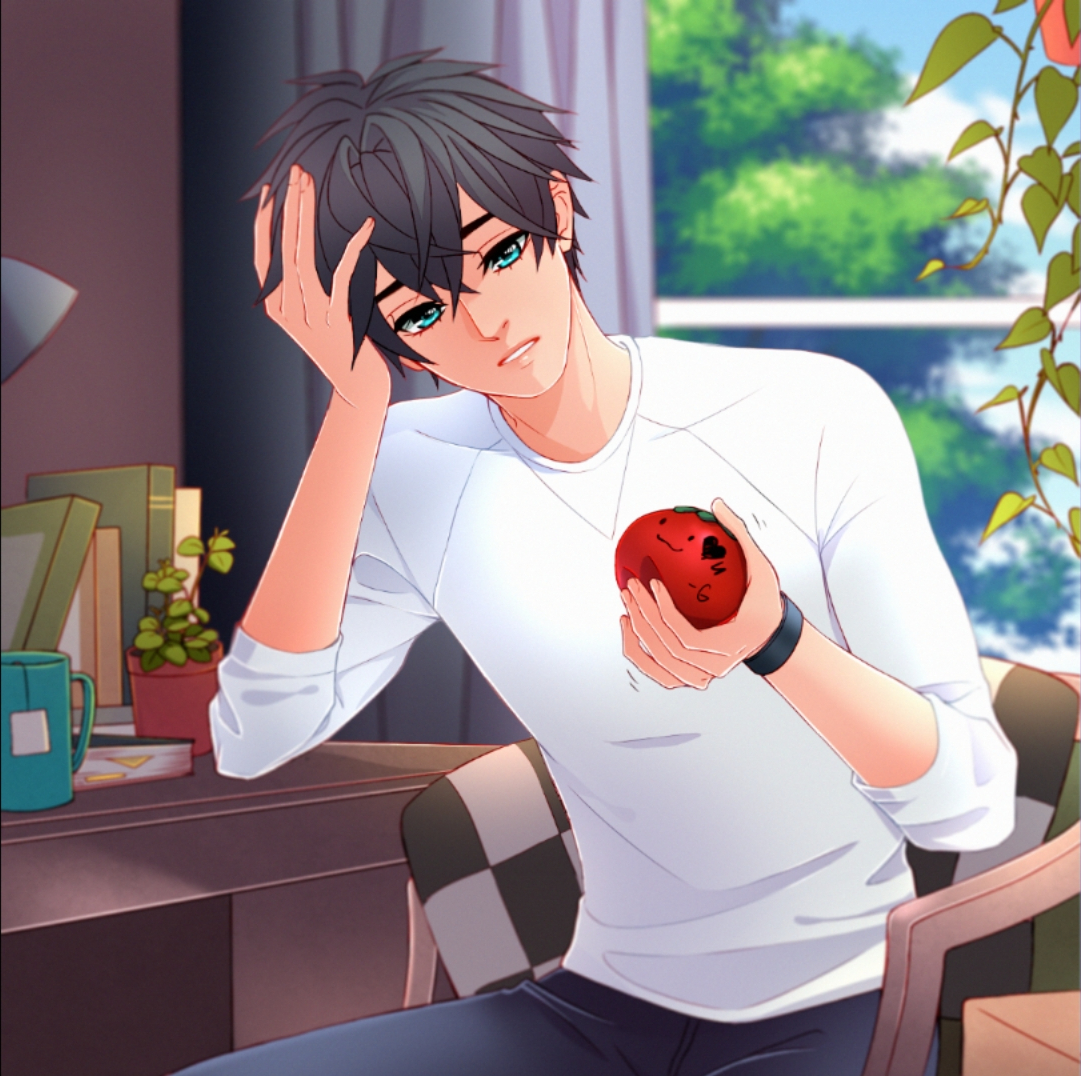 Jamie is Lincoln’s resident soft boy. He’s friendly, sweet, and very forward thinking. Jamie is always looking for ways to help others and make changes in the food industry that will benefit communities. He even volunteers at the school’s greenhouse and is especially fond of growing tomatoes. Jamie is always open to trying new and inventive ideas in the kitchen, but he often doubts himself and is prone to overthinking. Jamie grew up on a farm in the countryside and was invited to attend the Lincoln on a scholarship, so he works twice as hard as his classmates to prove that he is worthy of his place at the academy. He and Leo tend to pump heads a lot because of their different perspectives on cooking, but at the end of the day, they respect one another greatly. 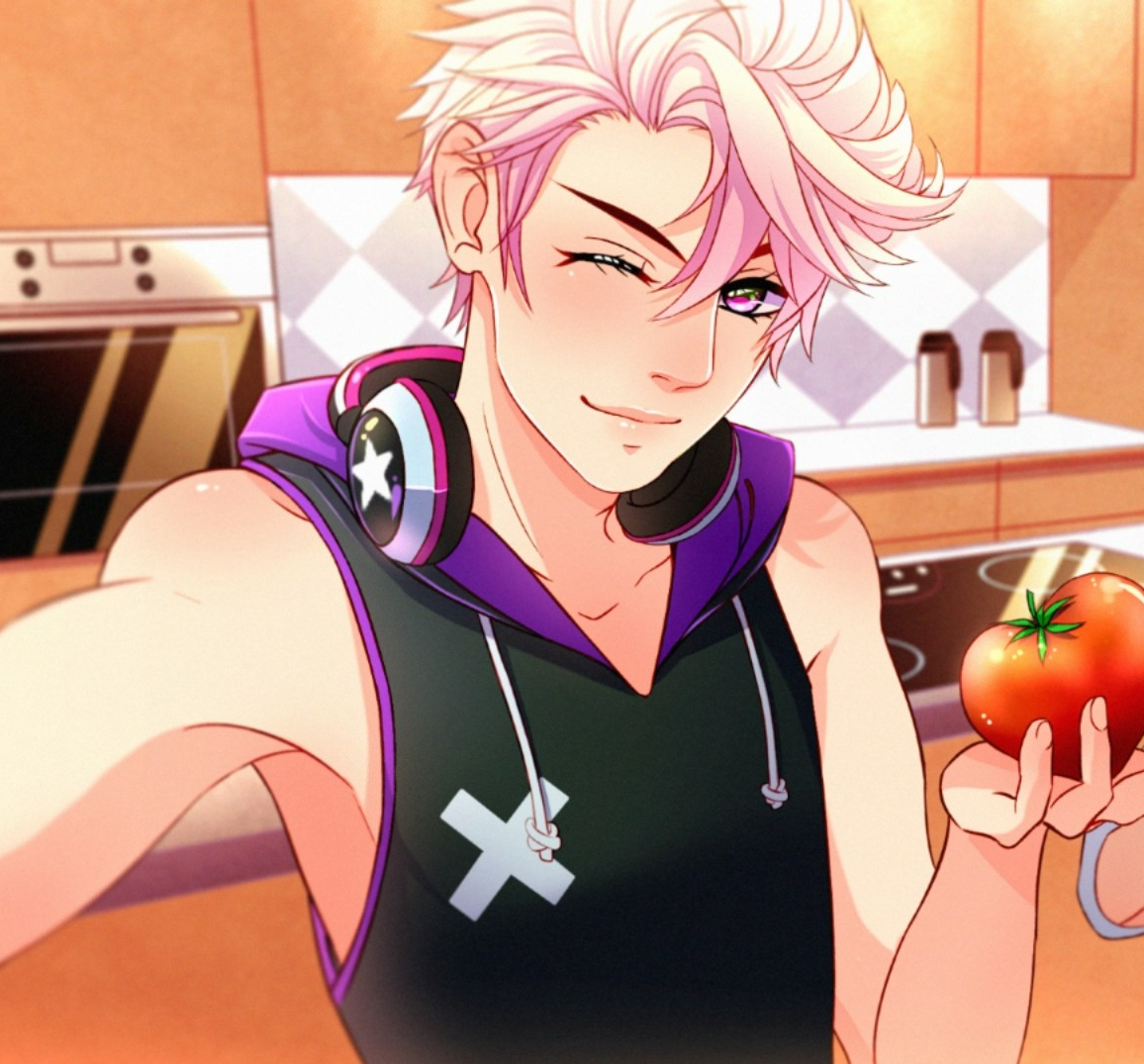 Geoffrey just kind of coasts through life, never really taking anything too seriously. When he actually attends class you can either find him sleeping or playing on his phone and instead of studying, Geoffrey would much rather stay up all night playing video games. If it weren’t for Jamie always pushing him to study and cleaning up after him he’d probably be failing all of his classes. The only time Geoffrey is enthusiastic about anything is when he’s flirting with girls or taking photos for his social media pages. While he can be a bit of a slacker, he is loyal to his friends and when pressed he will help out others in need. I was immediately drawn to Geoffrey for his appearance, but his ‘I don’t care” attitude had me wanting to shake him at times. 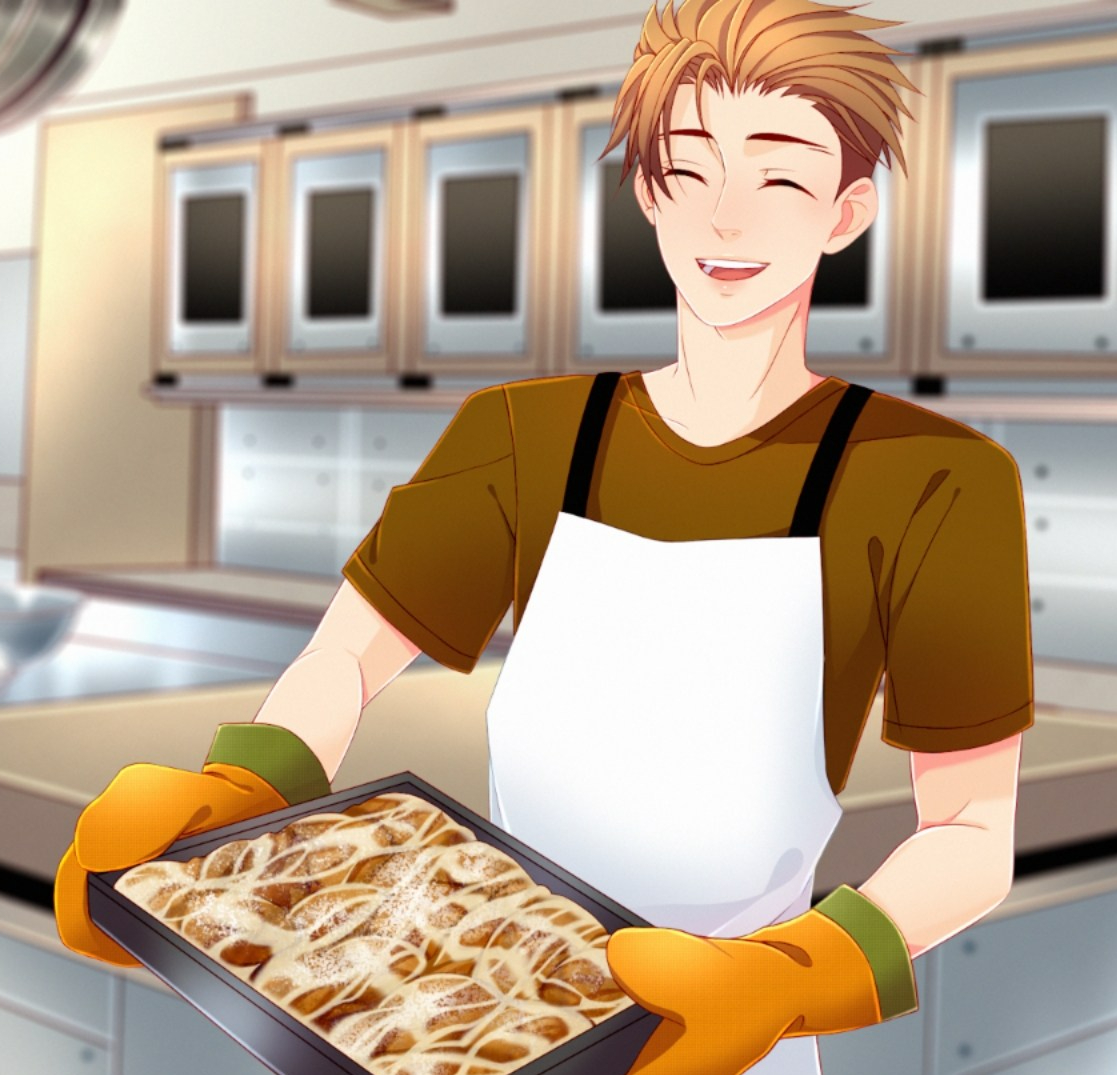 Tyler is the typical boy next door—fun, thoughtful, and kind. He has two younger brothers that he looks out for while his parents are busy taking care of their family’s restaurant. He and the MC have been friends and neighbors for years and Tyler is kind of protective of her—often sending her healthy snacks and video chatting with her when she leaves to attend Lincoln. Tyler is super sweet and not gonna lie, I am a sucker for wholesome childhood friend romances. He’s always there in the MC’s corner cheering her on and he even manages to come to some of the events at Lincoln just for a chance to see her. Since they’ve known each other for such a long time, they’re much more at ease with one another in a way you don’t see in the other routes. Geoffrey picks up on their closeness and is lowkey jealous of how much the MC cares for Tyler, though he doesn’t do anything about it.

So, Sifting Thyme kind of reminds me a bit of the Starry Sky series—you have a group of teens at a high school that has a very specialized academic program, except in this case we trade in Astronomy for Food Science. And the food stuff isn’t just a one and done gimmick, it’s literally baked into each and every chapter of the story. From fun food facts to cooking techniques to the business side of the food industry—this game really gives you an in depth look at the food industry. At one point the characters go on a field trip to a facility that specializes in cultured meat, where they get a crash course on the future of lab created meat, which I’m not gonna lie sounds really cool. And at one point the characters are given an assignment where they have to come up with a new business plan for a Korean BBQ restaurant during a pandemic—which is a bit on the nose, given we’re a little over a year into one ourselves. But, I really loved learning about all these innovations alongside the characters! The writers clearly did their homework, and it really makes for a much more immersive experience, heck there were times when I actually Googled some of the topics because I wanted to know more about what was being discussed.

Sifting Thyme has a fun mechanic that integrates social media into the gameplay, so you can interact with characters through text messages, Snapbuzz (Snapchat), and Clickagram (Instagram). The text message feature gets a lot of usage, especially when pursing Tyler, you can have whole conversations with the LIs and other characters that you befriend at Lincoln Academy or send quick messages between classes. Also, all of the CGs and images you get are pulled directly from texts and social media posts—it’s a super cool idea since you’d expect a bunch of high schoolers to be taking pictures of everything for their social media accounts.

The game was released episodically, with new chapters being released every month. I hate waiting, so I started the game after the thirteenth and final chapter of the main story was released so there weren’t any gaps in my gameplay. Each chapter is about 20-30 minutes long (depending on how fast you read) and and while there is a connective story between them, each chapter focuses on a new episode in the lives of you and the love interests. With an episodic game like this, I was worried that the story would feel disjointed between chapters, but there’s a nice flow to the story overall.  Most of the chapters give you a chance to interact with all the characters equally, so you can kind of play the field a bit until you settle on which guy you want to pursue. The romance routes lock in around chapter 9.

The romance… I’m 30 and I’m about as far removed from high school as I can get and I am not overly excited about revisiting my high school days in my otome games. Either the romance is too sugary sweet to be believable or it’s filled to the brim with unnecessary drama, but, thankfully, Sifting Thyme keeps things pretty chill. This isn’t a mature romance, so expect at most some hugging and soft kisses, and while some folks will want a bit more, I kind of like softer love stories every now and again. I liked all of the characters, there is some great chemistry among the main cast and I enjoyed how their different personalities played off each other. There was a lot of fun, lighthearted banter and Geoffrey trolling the heck out of everyone did get a bit of a laugh out of me every now and again. I also have to give props to the MC, she is a little behind everyone else since she’s starting a year late, but she works hard to catch up and even admits when she doesn’t know something. She isn’t a complete push over and there are times when she has some genuine moments of awesome.

The Verdict: Is Sifting Thyme Worth Playing?

Overall, I really enjoyed Sifting Thyme, it’s a cute game that is well worth playing especially if you want to know more about the culinary world! The food porn alone was enough to get me in the door, but I stayed for the fun characters and facts about the food industry. For their debut game, Nochi Studios has a clear winner and trust I am definitely looking forward to reading the epilogue when it’s released later this year (I need to know what happens between the MC and Tyler)! So, if you’ve been on the fence about giving this game a try I say, go ahead and stir up some romance with the cast of Sifting Thyme!

One thought on “Sifting Thyme Otome Review – Stir Up Some Romance”