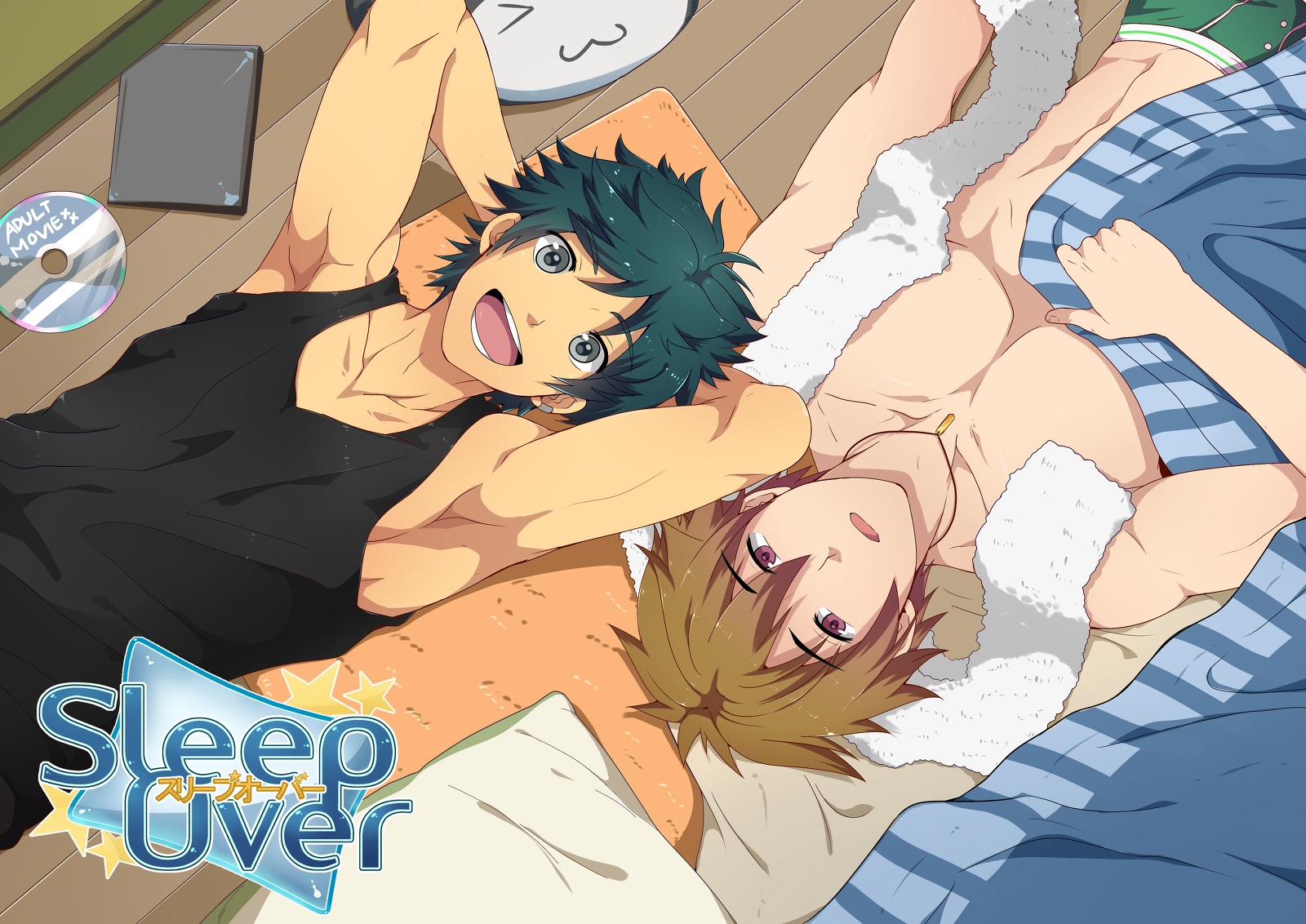 Sleepover is an 18+ PC BL visual novel from Black Monkey Pro an international BL artist circle. The game tells the story of Haruyuki Kano, a young man who has secretly been in love with his best friend, Sato Hideaki (Aki) since they were children. Not wanting to ruin their friendship, Kano has done his best to keep his feelings to himself. But when a freak rain storm forces Aki to spend the night at his house, Kano finds himself with a once in a lifetime opportunity. Will Kano finally tell Aki how he feels or will he be content being “just friends”? Whatever you choose, Aki and Kano’s relationship will never be the same again!

You asked for more BL, so here it is… The things I do for my fellow BL/yaoi fans out there… I kid, I actually bought this game a few months ago on a whim, but I never got around to playing it until now. There are two versions of the game: the Uncensored version which is $29.99 and the Censored version which is $14.99. . Black Monkey Pro disbanded, the game is no longer available for purchase!

*Disclaimer: I don’t own the images used in this review, all CGs and screenshots belong to Black Monkey. Since this game is NSFW there will be some NSFW images after this point. I tried my best to hide some of the naughty bits, but… *shrugs* you’ve been warned!

Edit: A few months ago Black Monkey Pro disbanded, so Sleepover and all of there other content is no longer available for purchase, but feel free to still give this review a read! For the truly adventurous folks out there, I’m sure you can find a copy of the game online somewhere…

Kano had been always in love with his best friend and senpai, Aki. However, his lack of courage and timidity hinders him to show his true feelings. This one rainy night, he’s given the chance to be alone with Aki. You have in your hands the fate of this young love. 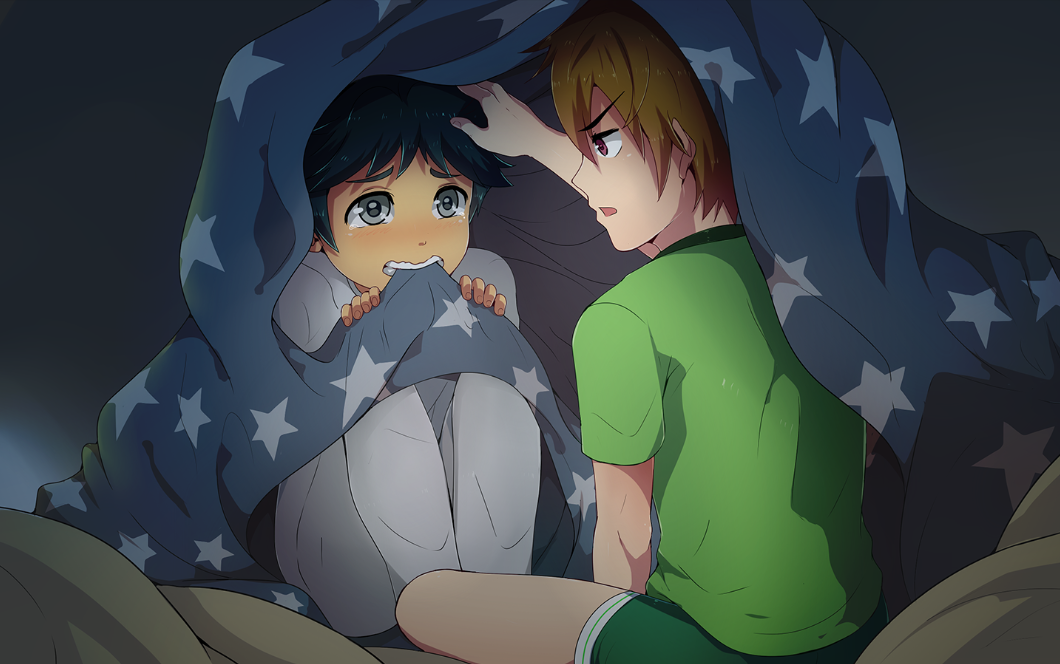 That is literally all there is to the story! I wish I was kidding, but the whole premise was one cliché after another, a guy in love with his best friend attempts to express his love for his friend through hot guy on guy sex. The writers attempted to add context to the relationship between Aki and Kano, by throwing in a short “blink and you’ll miss it” flashback. During the flashback, we see the pair as children experiencing their very first sleepover, but not much else is explained. Which is sad, because that was a really good opportunity for the writers to give some meaning to the relationship between the two male leads. Instead it just feels like something that was tacked on at the end to justify Kano jumping Aki’s bones every chance he gets.

Now, the characters… I feel like there was some miscommunication between the PR department and the game’s writers, because the character descriptions are completely off. Kano is far from timid, when he isn’t bouncing around like a hyperactive four year old he’s spewing some of the most thinly veiled come-ons ever constructed. It’s a wonder Aki hasn’t realized that his best friend was sweet on him sooner! Rather than finding Kano’s actions throughout the game endearing, I found them to be extremely creepy. When he isn’t peeking at Aki in the shower, he’s either forcing Aki to watch porn for hours on end or molesting the guy in his sleep… I wish I could post screenshots of all of the choices I had to make in this game, but they all seemed to follow the same basic progression: normal→ mildly suggestive→ full blown sex fiend… Mind you this is before they even have sex, it’s only after they sleep together that Kano becomes “timid”.

Then there’s Aki, where Kano was bursting at the seems with energy, Aki is the complete opposite. He’s described as being level headed and mature, but really he’s just bland. During my second play through I picked all of the overtly sexual choices just to get a rise out of him, and aside from a few light rebuffs or fierce blushing Aki didn’t react much. He pretty much took everything Kano did in stride which was downright disappointing. It’s almost as if Aki’s main purpose for being in the game was to serve as eye candy, there was little else remarkable about him as a character aside from his beautifully crafted abs. So imagine my surprise when it’s revealed that Aki is the seme in the relationship, a role that I feel is better suited to a character with a bit more… vigor.

But the cherry on top of this train wreck was most definitely the gratuitous amount of grammatical errors and typos. I can excuse a few mistakes here and there, but when there’s awkward phrases in every other line of dialogue, that’s grounds for hiring a new proof reader. And before you all start asking, no this was not a translation, this is an English language only release, so there is no excuse for the writing being so messy.

Overall, the writing in this game is thin and full of clichés and errors, which makes me wonder whether the developers just threw the writing in at the last minute to justify charging so much for a glorified CG set. But, despite my complaints about the characters, the plot, and the writing there was one silver-lining. The artwork in this game was simply gorgeous, it almost made all the other crap worth it! 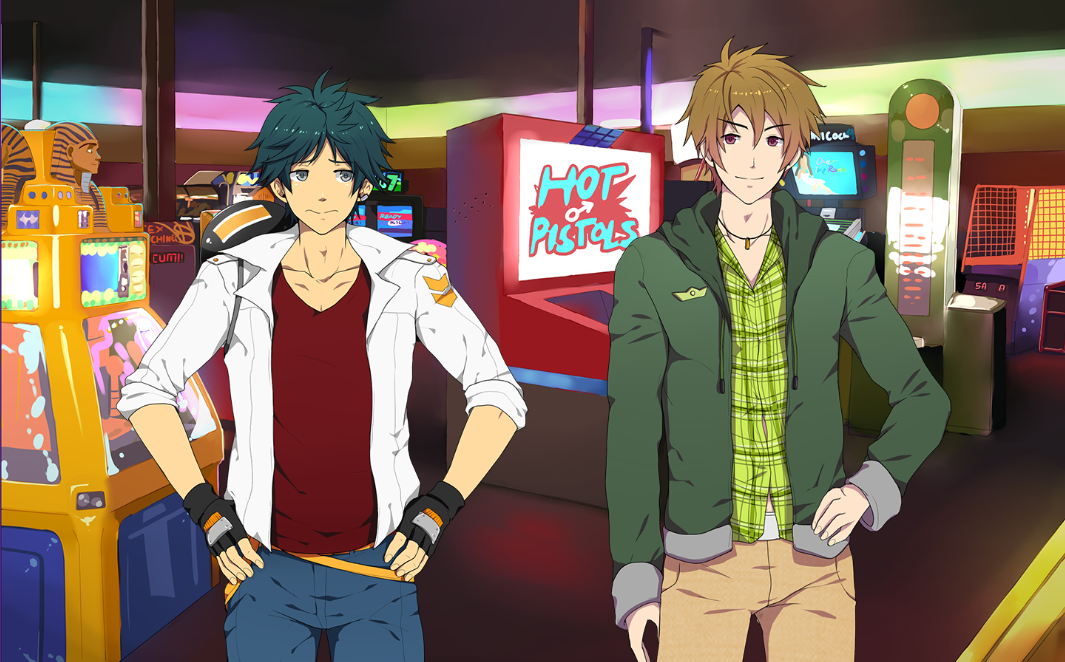 The backgrounds were vibrant and full of fun details, the background artist really took their job seriously and that extra effort really shows, most notably during the arcade scene. Even the character sprites were well done, each sprite came with various expressions which were unique to each character.  I only have one complaint about the sprites, each character had just one pose. But, I was especially blown away by the CGs, *fans self* talk about steamy. Since, Sleepover is an 18+ BL game, the majority of the plot is allotted to smut and boy does this game pull out all of the stops! The sex scene(s) take up the bulk of the game and the developers did a wonderful job on each of the 25 obtainable CGs. This is clearly where the developers spent most of their time and effort. When Aki and Kano finally consummate their relationship, the player is treated to some of the lewdest sex I have seen in a long time! The young lovers shift between a wide range of positions and poses, which will cause even the most hardcore BL fan to blush.

However, the gorgeously rendered smut scenes are bogged down by the dismal plot and writing. Unlike other games that can hide behind advanced graphics and mechanics to make up for substandard writing, visual novels rely solely on clean descriptive writing. So when the writing isn’t up to snuff the whole game suffers, in Sleepover the biggest casualty of the writing are the sex scenes! Not only did the developers fail to provide contextual justification for Aki and Kano’s progression from friends to lovers, the scenes themselves were devoid of descriptive details… my imagination should only have to work so hard. Sure I have the CGs to show me what’s going on, but I needed more than that, I needed the writers to tell me what’s going on as well! And don’t get me started on the choices… the choices during the sex scenes were so ambiguous, it was hard to work out which answers lead to the best endings. It wasn’t until the fifth time I landed the bad ending that I realized I had to get both guys to climax together in order to get the good ending. But, if you want the true ending I have no idea, I landed that one by sheer luck!

The Verdict – Is Sleepover Worth Playing?

In the end, Black Monkey Pro’s Sleepover is just one cliché after another, and not even the beautiful CGs are enough to justify anyone spending $29.99 for the uncensored version of the game.

The story was nonexistent and the characters were watered down caricatures that simply exist to fulfill the lewd fantasies of hardcore BL fans. So, if you are expecting a deep heartwarming tale of childhood friends who fall in love and become lovers, this is not the game for you (but I can point you in the direction of some yaoi manga that’ll fit the bill just fine).

Don’t get me wrong, I enjoy senseless smut as much as the next person, but for $29.99 I was expecting a little more story with my smut. Instead I got a whole lot of smut tied together by a paper thin plot, if I could even call it that. So, if you are looking for smut without a plot Sleepover is the game for you! If not, there are better BL games out there…