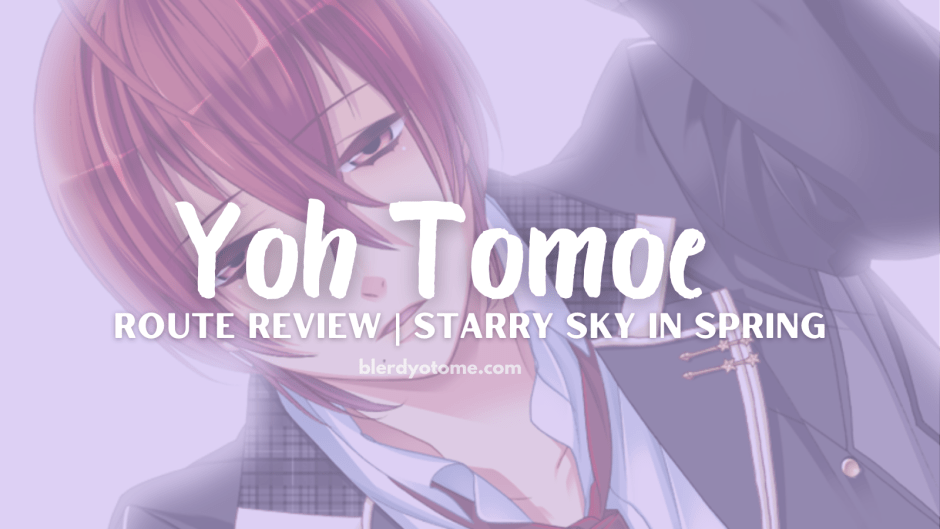 Like the first time I played Starry Sky in Spring, I chose Yoh Tomoe as the first love interest. I guess, he’s the character that left the biggest impression on me in the beginning. While I liked the game overall, I feel like the individual routes were predictable and full of fluff moments. I enjoyed Yoh’s characterization in the game, but there were a few moments when I found myself rolling my eyes at the “lets be friends forever” theme of Starry Sky in Spring.

A lot has changed since my first playthrough of Starry Sky in Spring back in 2013. Not only am I older, but my opinion of high school romance otome games has changed considerably. I’ve grown disillusioned with the cutesy, sugary sweet romance premise that tends to plague otome with high school settings. So, you can imagine that this was a slow go for me, a really slow go.

Yoh Tomoe is a half French transfer student, who enters Seigetsu Academy towards the end of the player’s first year. Yoh is the catalyst for change in the game as his appearance threatens everything Kanata, Suzuya, and Tsukiko have built up until this point. Unlike the other two boys, he immediately makes his intentions towards Tsukiko known. Which puts the others, especially Kanata on the offensive. Before this point, neither Kanata nor Suzuya were willing to step out of the friend zone and actually pursue Tsukiko.

So at the very least he gets the other guys to admit their feelings for her, so I guess its a good thing he showed up when he did. His appearance disrupts the happy friendship triangle that exists between the others creating a love square(?). While I’m usually not a fan of love rivals, somehow the concept works for Starry Sky, as it allows the characters to progress beyond their assigned roles into something more.

Yoh has spent most of his life abroad and is quite proficient in French which he uses throughout the game. Because he was raised abroad, he is naïve about common Japanese customs and traditions. I found it cute how excited he always seemed to get about everyday experiences. Yoh also possesses an inhumanly large appetite, he is especially fond of sweet foods.

He claims early on to be a childhood friend of Tsukiko, having met her when he was in Japan years ago visiting his grandmother. Yoh fell in love with her because she was the only person not to make fun of him for his half-French heritage. In order to see her again, he begged his father to allow him to transfer to Seigetsu Academy. Yoh can be extremely kind and compassionate, but because of past trauma, he is distrustful of others. Initially he is hostile towards his fellow classmates, going out of his way to ignore them. However, at Tsukiko’s insistence he warms to the other guys and learns the importance of friendship.

There are two endings in the PC version of the game, the Good ending which takes place 2 years after the end of the game and the Best ending, which takes place 5 years after the game. Both endings are good, but I definitely prefer the Best ending…It’s just more satisfying. In the Good ending, Tsukiko and the gang are preparing for graduation and reminiscing about their high school days by the front gate of the school, when Yoh shows up. He’s come back to Japan just in time for the graduation ceremony. He proposes to Tsukiko, and hilarity ensues courtesy of Kanata and Suzuya… In the Best ending, the story picks up during Yoh and Tsukiko’s wedding, with Kanata and Suzuya cheering the happy couple on from the sidelines.

Do I Recommend Yoh’s Route?

I don’t know how to feel about Yoh’s route in Starry Sky in Spring. It’s okay, but it didn’t really wow me. I enjoyed Yoh’s honesty and directness way more than Kanata and Suzuya’s passive approach. But, I couldn’t help but feel like it was too much too soon. I mean they are in high school, his feelings, while genuine, seemed to be too deep, it was kind of oppressive.  I guess they were going for the overly expressive foreigner trope, but with a heroine as oblivious as Tsukiko, it seemed like a lot of wasted effort.

Then there is Tsukiko, herself…I will admit that she had some strong moments throughout the route, but for the most part she was weak. She was so desperate to cling their friendship that she was holding everyone back. No one could move on until, she accepted her changing feelings towards the guys, especially Yoh. This girl takes denial to a new level and I could have done without it…So while, I enjoyed parts of this route, overall my opinion of it is pretty meh… If you like cute high school romances, this is the game for you! If not, maybe you should pass Starry Sky in Spring up for a more mature game.

7 thoughts on “Starry Sky in Spring | Yoh Review: The Guy I Like is a Capricorn”