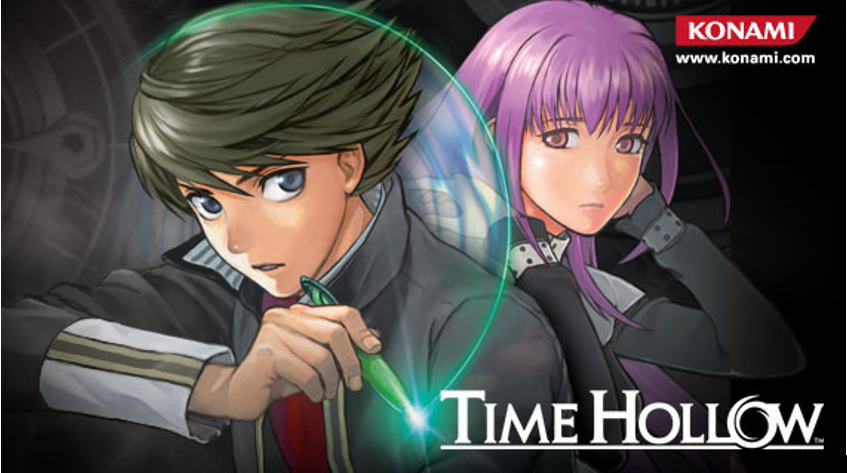 *So this is my first non-otoge review…let me know what you think of it!*

What if you had the power to change the past with just the flick of a pen? Would you use it? What about the consequences? Are they worth it?

These are the questions Ethan Kairos must answer, when he wakes up one morning to find a strange wormhole at the head of his bed. When he reaches inside he finds a strange green pen that allows him to open holes in time! 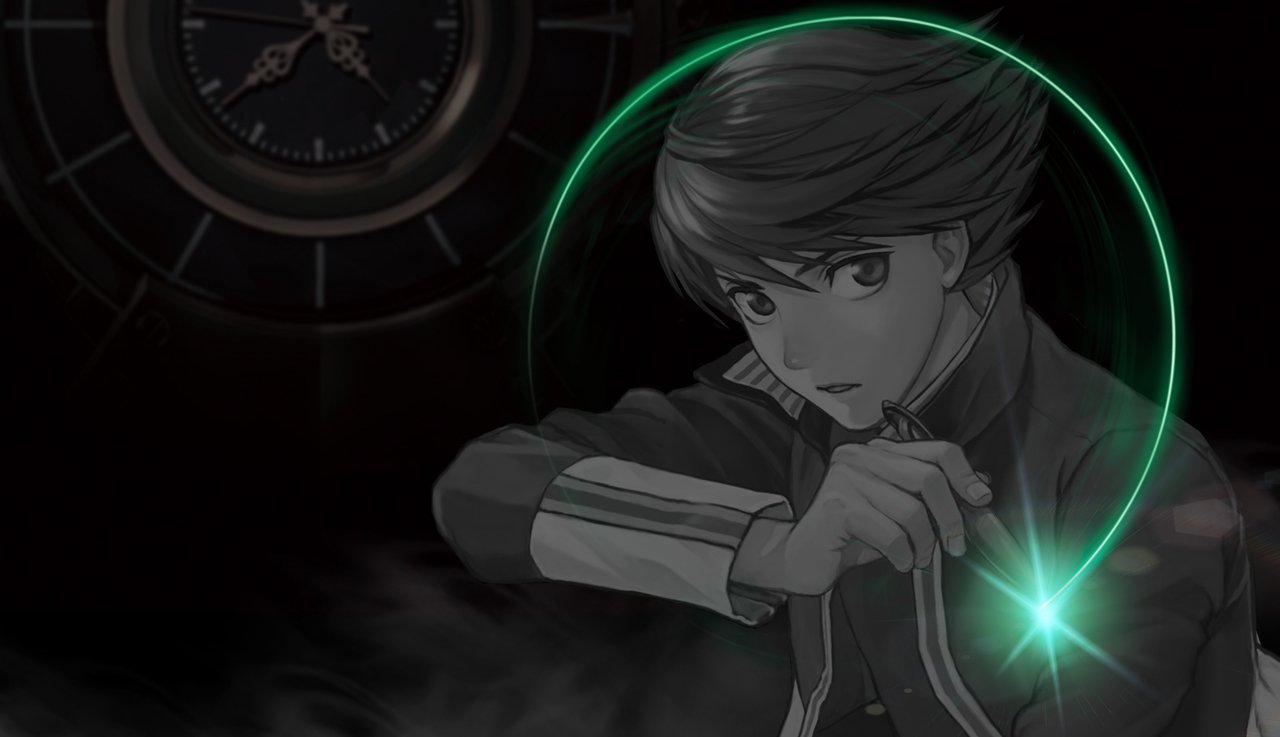 Time Hollow is a 2008 Nintendo DS single-player adventure visual novel. Written by Junko Kawano, it serves as the spiritual successor to the 2001 Playstation 2 game Shadows of Memories (which is also a really great game).

The game follows Ethan Kairos, a normal boy, whose life changes drastically when his parents disappear without a trace on the eve of his 17th birthday. He soon realizes that not only are his parents gone, but that everyone around him seems to believe that his parents actually disappeared twelve years ago. He soon finds the Hollow Pen, a strange green pen that allows him to open up portals in time. He also finds a note instructing him to use the pen at his school, there he finds a note from his father explaining how the pen works.

Ethan decides to use the pen to find his parents and correct any mishaps that occur in the process. By using the pen Ethan causes several parallel universes and timelines, but he seems to be the only person with any knowledge of them. Things only get more complicated when a mysterious new girl named Kori Twelves shows up in his class one day out of the blue. What’s more, everyone seems to think she’s been in their class all along, he befriends the girl and learns that she may know more about the Pen and the mixed up timelines than she lets on. She and Ethan work together to piece together fragmented flashbacks and events in order to uncover the mastermind behind all of the “wibbly wobbly time-y wimmy stuff” and set everything back to normal.

In both the English and the Japanese versions of the games, the last names of all of the characters are a reference to numbers/time. At times in the English version it can seem like it’s a bit of a stretch, though…The surnames of Ethan and his family all reference time, Kairos comes from the ancient Greek word for “decisive/opportune moment”.

Ethan Kairos is the protagonist of the game and wielder of the green Hollow Pen. At the start of the game he is a normal 17 year old high school student who loves clocks and watches. He’s smart, but has a habit of not thinking his actions through all the way which leads to occasional mishaps with the Pen.

Timothy Kairos is Ethan’s father, former user of the Hollow Pen. His use of the pen has caused him to prematurely age. He is a fair parent, if not a little strict. He has a younger brother with whom he isn’t on good terms with. He mysteriously disappeared 12 years ago.

Pamela Kairos Ethan’s mother, like her husband, she disappeared mysteriously 12 years ago. She is a kind woman, but her cooking tends to be on the bland side. It is unknown whether she knows about the Hollow Pen or not.

Derek Kairos is the uncle of Ethan and the younger brother of Timothy. He is a down on his luck freelance writer on the trail of a mysterious incident from long ago. He can be harsh with his words, but deep down he’s not a bad guy. He becomes Ethan’s guardian when Timothy and Pamela disappear.

Irving Onegin is the main antagonist of the game and wielder of the second Hollow Pen. He poses as a local shop keeper in order to keep an eye on Ethan and his family. He like Derek, is trying to uncover the truth behind a mysterious incident from long ago.

Jack Twombly is a teacher at Ethan’s school. He likes to quiz Ethan with riddles about time. He is a kind teacher with years of teaching under his belt. He was once the teacher of Derek Kairos and Timothy Kairos. He is only encountered in the school building.

Vin Threet is Ethan’s childhood friend and his next door neighbor. He used to play basketball, but an injury ended his career prematurely. He is easy going most of the time, but can get serious when his friends are in need. He has a younger sister.

Ashley Threet is the younger sister of  Vin, she and her friend Emily Niner have a crush on Ethan. She is often the victim of the negative timeline shifts. She is the typical little sister, she and Vin argue and tease each other alot, but in the end she loves her brother.

Ben Fourier is another of Ethan’s childhood friends. He is smaller and weaker than his friends, Ethan refers to him as a “bit of a wuss”. He has a huge crush on Olivia Eights a waitress at Chronos cafe, where he spends most of his time. He also dislikes dogs due to an incident from his childhood.

Morris Fivet is another of Ethan’s childhood friends. He is a serious academic, spending most of his time studying at school or in the library. He is constantly stressed about his grades and can come off cold. He has an affinity for animals, especially dogs.

Kori Twelves is a mysterious girl who shows up in Ethan’s class one day, who knows about the Hollow Pen. She works closely with Ethan to fix the time shifts and their consequences. She seems to be at the center of all of the strange occurrences. She may also have some connection to a mysterious incident from the past.

Sox is the Kairos family  cat, but he is especially close to Ethan. He used to belong to Timothy and his brother Derek, but it is hinted that he has been with the family for much longer than that. He shows up throughout the story to offer Ethan assistance.

The gameplay is typical of a visual novel, the player controls Ethan Kairos as he moves around town searching for clues and interacting with other characters. From time to time the player will need to open a Time Hollow using the Hollow Pen. In order to do that the player utilizes the DS stylus to draw circles on the lower touch screen in the appropriate location. Time on the other side of the Time Hollow is frozen and the player must interact with an item or object on the other side by tapping it in order to manipulate it. Once the objective is done the player must close the Hollow. Each time a Hollow is opened a little of the player’s HP will be depleted, HP can be regained by collecting Chrons from Sox. If HP is not recovered by the end of the day, the total HP will decrease. After each time alteration, Ethan will gain flashbacks to help him acclimate to the new timeline. Ethan must collect information from around town to piece together unresolved flashbacks. The game features partial voice acting and animated cut scenes.

I absolutely love this game! Time Hollow has enough mystery and suspense to keep you playing until the very end just to see how it all ends! The plot is engaging, the sub plots and side quests add to the overall story rather than taking away from it. While the course of the story is for the most part set in stone, there are some fun extras thrown in here and there to give the player some sense of control over the story. For example, during some of the Hollow Pen expeditions you can change things unrelated to the objective at hand and do things that have no bearings on the plot. For example, you can steal a character’s glasses or grope a female character which in turn triggers a rather funny dialogue.

The characters are unique and I especially like Ethan. He is a likable protagonist not because he’s perfect, but because he is not perfect. Despite always having the best intentions when using the Hollow Pen, more times than not, his tinkering with time causes more harm than good. For many of the events in the story Ethan is judge, jury, and executioner, and he has to make the best decision even before having all of the details necessary to make an informed decision. Yet he manages to do a pretty good job at it, especially for 17 year old high school student.

Of all the character interactions in the game, I think I enjoyed the relationship between Kori and Ethan the most. It was refreshing to see a male/female pair that didn’t ultimately devolve into a romantic relationship. It was refreshing to see them play off of one another and I especially like that they each make up for each other’s strengths and weaknesses. I will admit that there are romantic under tones to their relationship and while they are apparent, they largely remain unspoken and never evolve into more than simple crushes.

The artwork is well done, and the cut scenes are anime quality. They are not drawn out or over used and they do a great job of moving the story along. I also like that the choices during the gameplay are not negated by a single final choice at the end of the game. Some aspects from each of the parallel timelines is incorporated into the final “permanent” timeline. Like most visual novels Time Hollow is plagued by a rather linear plot and a rather restrictive gameplay. The player makes very few plot altering choices, but all of that is saved by an engaging and unique plot. All in all Time Hollow is an amazing game and well worth a playthrough, so my overall rating is…