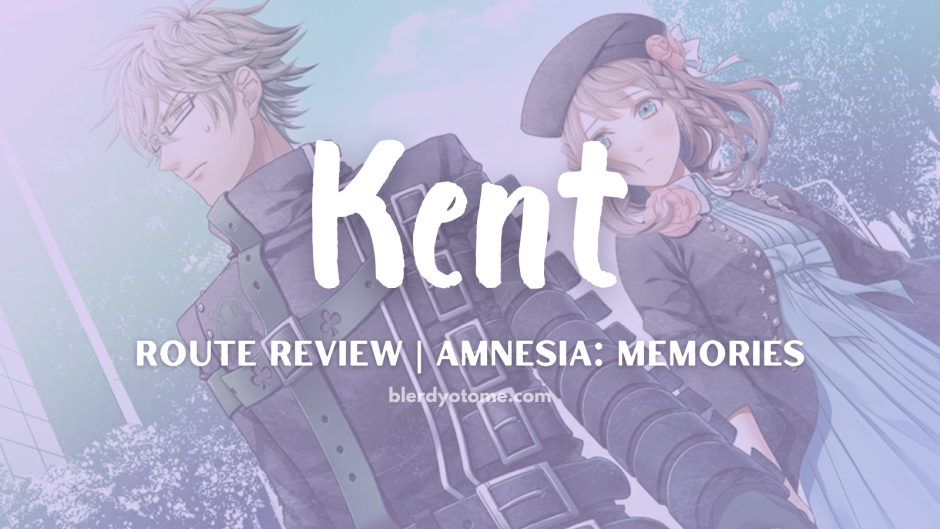 Over Spring Break, I mangaged to finish, Kent’s route in Amnesia: Memories. Let me tell you, I am so glad I didn’t play him first. He would have spoiled the rest of the game for me. I LOVE Kent, he is by far the best route of the game! I was so surprised by how much I liked this adorkable math whiz! There wasn’t really a “mystery” in this route. Instead a good deal of the focus is put on the relationship between Kent and the MC. There was no over the top drama or conflict in Kent’s route. Which is refreshing given the plotlines in some of the other routes. I got the Normal Ending on the first try.

Well This is Awkward

After choosing the Clover World the story follows the same scenario as Ikki’s route. The MC wakes up alone with no memories. She and Orion search the room and check her phone. I don’t know if the MC is a complete idiot in this route or just well prepared. Because she has 1250 contacts in her phone ranging from the dentist and school to actual friends. After closer inspection they find that she doesn’t have nearly as many texts. So she and Orion start there, but those are also useless,. Each message reads ‘Good morning’ and ‘Good night’ and they’re all from the same person, Kent.

Orion thinks this is weird, but the MC speculates that the sender must not be good at sending messages. Orion then comes to the  conclusion that Kent is your boyfriend. Like clockwork she receives a text from Kent asking to meet at Meido no Hitsuji. Orion remarks that he thinks he wants to break up with the MC. So she and Orion head over to the café. Unfortunately, she has no idea what Kent looks like. So she sits down at a random table to wait. Thankfully, Kent sees her and walks over to her table. He takes her actions as a sign that she’s still pissed about their argument the day before.

When a Rational Man Falls in Love

Kent is a Mathematics graduate student and the most stubborn logical person I have ever had the pleasure of romancing in a otome. He acts purely on logic (and numbers) and everything outside of that might as well not exist. He has a logical explanation for everything, including love, which he views as completely irrational. Blunt and extremely analytical, the MC and Kent have a really turbulent relationship in the beginning of the game.

Kent believes that a couple has to follow a logical progression of activities before love can occur. Spending time together and holding hands before moving to kissing. It’s actually really cute, but because he is such a stubborn butt, he doesn’t execute romantic gestures well. Prior to the story, the MC comments that she’d like him to text more. So he starts sending her literal ‘good morning’ and ‘good night’ texts. When she asks for romantic walks, he literally just takes her on silent walks. So, there is a lot of unintended comedy in Kent’s route. Because he’s a novice with love, he gets a lot of his relationship advice from Ikki, and surprisingly it’s all good advice.

The central “conflict” of the route is that Kent is preparing for a presentation for a research convention. So there’s a big chance that he may have to study abroad in London. So for most of his time in the Math lab at the university where he and the MC met. Kent was initially her math tutor. She was so impressed by his amazing math skills that she developed a crush on him. Lucky for her, Kent also uses the same route she uses for her morning walk with her dog, Kuro.

Before she could confess her feelings to him, she overhears her friend Mine asking Kent out. But Kent rejected Mine, claiming that he doesn’t believe in love. Discouraged, she complains about her one-sided love to Kent. Being the dense nerd that he is, Kent thinks the MC has a crush on someone else and gets jealous. Not wanting to miss the opportunity, he asks the MC to be his girlfriend. But, he does it in the most insensitive way imaginable. He proposes that his ‘feelings’ for the MC are an irrational anomaly that he must further research by dating her. The MC is rightfully offended, but reluctantly accepts his challenge. Because they are both stubborn butts, they do nothing but argue.

Kent is such a Sweetheart

From that point on their relationship grew and Kent became a lot sweeter towards her. Kent has been in love with the MC from the beginning. He just doesn’t know how to go about expressing his feelings. Once the MC starts warming up to him he does everything in his power to keep the good relationship between them going.

For the first half of the route Kent handles the MC with kiddie gloves. He’s extremely guarded and always on edge, with her. But, when it becomes apparent that the MC has changed. He becomes more honest with his feelings, becoming a flustered, awkward mess. He even gets jealous when his friend Ikki openly flirts with the MC. I love how Kent acts when he’s in love. Logic goes out the window and he becomes a big old softie.

At one point Kent buys her a Half Month Anniversary cake as an apology for being a bad boyfriend. When he forgets he’s supposed to meet up with the MC for a date, he drops everything and runs from his house to a train station an hour away just to keep his promise. After the MC finally reveals her amnesia to him, he doesn’t want her to regain her memories for fear that she will remember why she hates him. But, that doesn’t stop him from setting meetings between her and her friends to help her regain her memories when he gets too busy with work. Kent truly loves the MC putting her well-being first. He is willing to throw caution to the wind for her sake.

Do I Recommend Kent’s Route?

I could not settle on one gif for this one, so I used two. This route is a breath of fresh air after Ikki’s route and a welcome shift from the drama of Shin’s route. I loved this route and I absolutely love Kent. The more romance driven aspect of this route, is perfect for a character like Kent. Because he isn’t as in your face as the other LIs in Amnesia: Memories. You get to really focus on Kent and the MC’s character development without having to muddle through the convoluted plotlines that plagued the other guys’ routes. But, what surprised me about this route was that Ikki is super supportive in Kent’s route.

Now the endings. I actually liked the Normal Ending more than the Good Ending. Not that the Good ending was bad. The Normal ending just seems to fit better with Kent’s overall character growth. In both endings the MC gets hit by a car and is taken to the hospital.

In the Normal ending, Kent goes through with his presentation before rushing off to the hospital to see the MC. She regains all of her memories and forgives Kent for being an insensitive prick about her dog. A few weeks later, after Kent is accepted into the study abroad program, they share a tearful goodbye at the airport. The MC promises to wait for his return. Months or weeks later, the MC receives a text from Kent, which she assumes is his regular ‘good morning’ text…instead she is surprised to see a heartfelt (for Kent) text: “I want to see you.” I was giggling like a school girl when I read that text…it was just so sweet and so Kent.

In the Good ending Kent does not go to his presentation…instead he rushes to the side of his injured girlfriend, thus forfeiting his chance at getting to study abroad. The MC regains her memories and a repentant Kent apologizes for being and insensitive dick when her dog died. When the MC’s all healed up, Kent takes her to a park they passed by on their walks and proposes to her.

Afterwards they go to the classroom where they first met and Kent admits that he pretty much fell in love with her at first sight. He then tells her that he plans on going out for the study abroad program in the following year and that he wants to take the MC with him. In the epilogue they share a snowy kiss in London! The bad endings are shitty and should be avoided unless you’re a glutton for punishment…It broke my heart to hurt Kent for those endings…

If you play any route in this game, it should be this one! No seriously, go play it right now! Kent made this game for me…I wouldn’t be wrong in saying that Kent actually saved Amnesia! There was so much right with this route. Kent is an adorable cinnamon bun, who just wants to know love like everyone else…I have absolutely no complaints about this route, it even made the silent MC and Ikki bearable.

21 thoughts on “Amnesia: Memories | Kent Review: My Lover is an Awkward Genius”