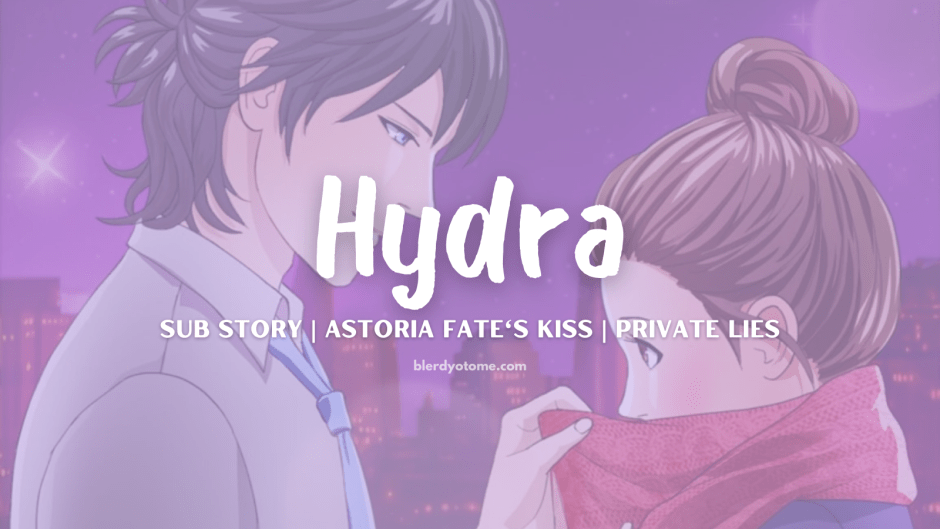 So this is a special post just for you guys, before I dive into Hydra’s Season 2 stories! So, instead of a full blown review, I’m going to cover Hydra’s first sub story, Private Lies. This story takes place shortly after the events of Hydra’s season 1 main stories and essentially takes the place of a typical epilogue. The story is three chapters long and comes with it’s own special image.

After the events of season 1, the MC has been promoted from desk monkey to full-fledged Field Agent. But, so far it hasn’t been as glamorous as she would have hoped, that is until Cyprin assigns her to her first ever case! Since the Hercules incident, H.E.R.A. has been keeping a close eye on each and every godly monster by putting them under protective custody. While a few were reluctant to comply with the new orders, many welcomed the added protection.

But, when a godly monster with ties to the Gorgon gang, misses his regular check-in, H.E.R.A. begins to fear the worst. So, it’s up to our snarky MC to locate this elusive monster. With her usual combination of pluck and grace, our lovely MC charges head first into her task, even eliciting the help of her icy boyfriend, Hydra. But, when she lets him in on the details of her case, Hydra not so subtly redirects her attention. What’s he hiding behind his cool poker-face? Is he somehow involved with her missing persons case? Will our poor MC be forced to put her own boyfriend back behind bars?

Since facing off against Olympus, Hydra and the MC have settled into a comfortable route, and their relationship couldn’t be better. Hydra is still the king of shade as usual, but when he and the MC are alone, he becomes a force to be reckoned with when he unleashes his passionate side. His suave charm easily manages to sweep the MC right off her feet as their days pass in rose colored bliss. However, it’s not long before everything comes to a screeching halt.

After learning about the nature of her case, Hydra becomes noticeably tight lipped and begins throwing himself into his work. Leading the MC to wonder if he knows more about her case than he is letting on. It soon becomes apparent that he is indeed involved with her case, but instead of sharing what he knows with the MC he takes to lying about it. Even after falling for the MC, Hydra is still reluctant to share his secrets with her, finding it difficult to fully open up to her about himself and his work. This infuriates the MC, leading her to doubt the sincerity of his feelings for her.

Overall the story contains many of the same personal conflicts the MC and Hydra dealt with the season 1 main stories. Hydra, while more affectionate towards the MC, is still reluctant to accept her assistance. He’s still the lone wolf, preferring to deal with his problems alone, unwilling to allow the MC to be pulled into his dangerous lifestyle. However, his secretive activities only irritate the MC, who sees his reluctance as a lack of trust in both her and their relationship. In the end the conflict is resolved, after the MC confronts him about it, causing him to reflect on his actions.

I could really relate to the MC in this story, her anger and frustration was understandable, and I could completely relate to her actions on an almost spiritual level. She did exactly what I would have (and have) done when confronted with the same situation. I was impressed by this story and it’s portrayal of both Hydra and the MC, as they felt more like real people than fictional characters. Their actions were natural and that added an organic layer to the overall plot progress. I highly recommend this story, it does an excellent job of continuing the story started in season 1 and it is an excellent lead in to Hydra’s season 2 stories.