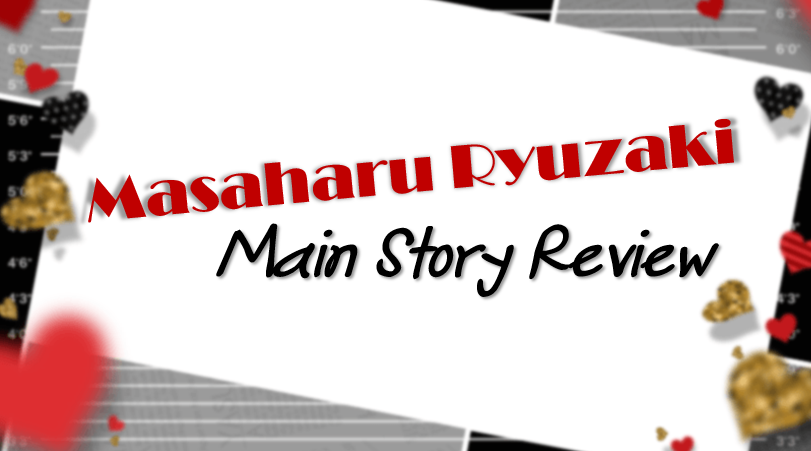 First I should probably say that I don’t usually go for the arrogant types that Voltage seems to be hellbent on shoving down our throats all the time. In fact I tend to avoid them all together. Full blown jerks tend to rub me the wrong way, but somehow I found myself playing Masaharu’s route anyway… 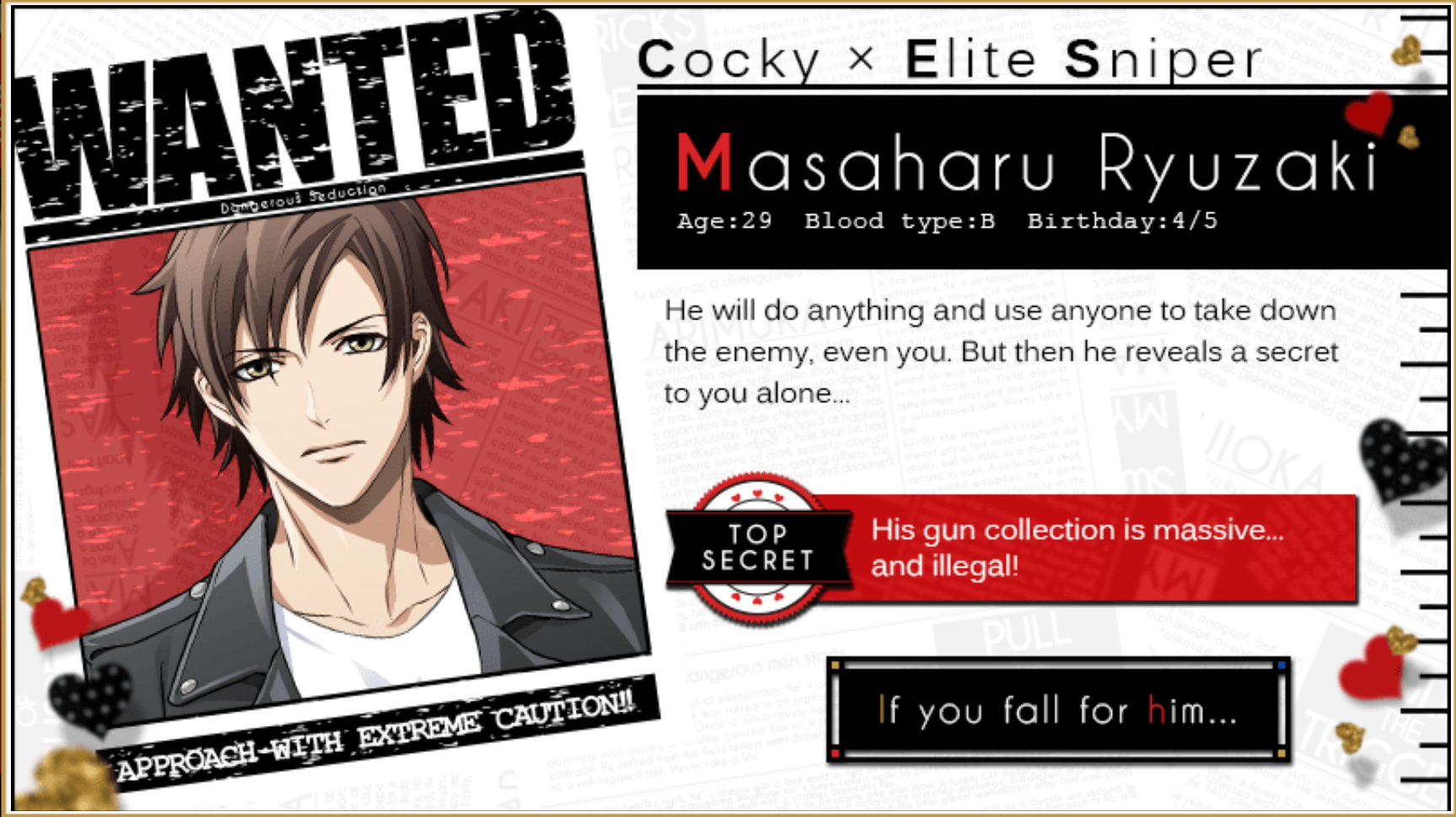 I’m going to try and be fair with this review, but like I said… I’m not a fan of guys like Masaharu. This route took me a lot longer to play than I originally intended and that’s because I spent most of my time shouting expletives at my poor innocent iPad…  If you want a general overview of Dangerous Seduction, click HERE, it’s covers the basic premise of the game and includes links to the other character reviews I wrote for the game.

You gotta be heartless to protect some things

So, prior to the start of the game, the MC’s father was in charge of protecting a special room which contains important secret information. In my head, I imagine the room is full of cancelled Voltage manuscripts for Metro PD: Close to You, A Knight’s Devotion, and Office Secrets, since we never get an explanation as to what is actually in the room I had to get creative. 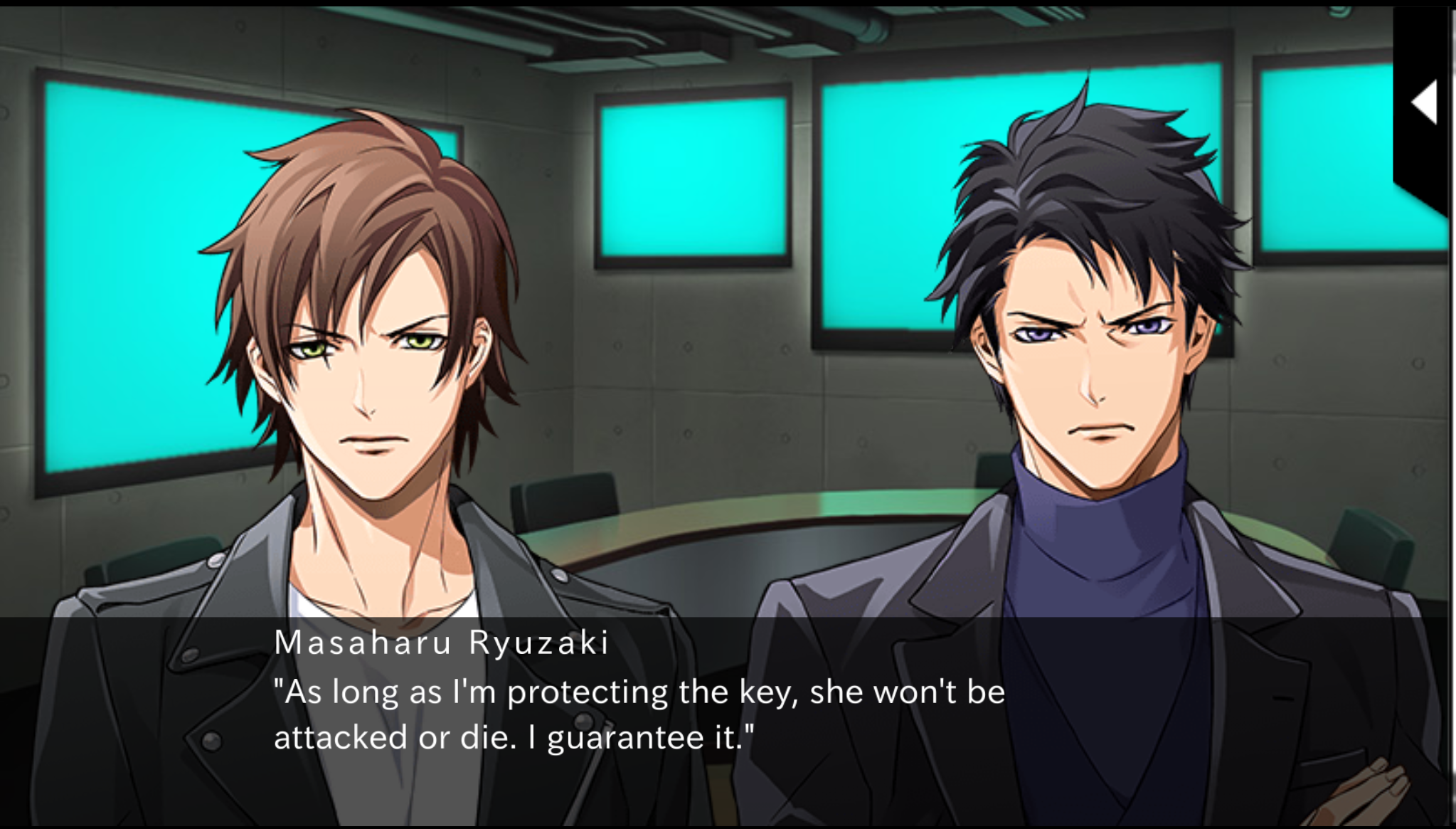 *ahem* So, an also unnamed enemy organization, figured out that the MC’s dad was the key to unlocking the the room and had him killed, but before his death he had the MC designated as  the new “key” and contracted the band of merry fugitives as her protectors. Yeah, I know, when you write it all out like that it sounds kind of stupid… So after explaining things to the MC, Inui asks the MC to choose one of the guys to be her personal bodyguard. But because she is still trying to process the massive info dump she just experienced, she is unable to properly choose a bodyguard, so Masaharu volunteers his services! 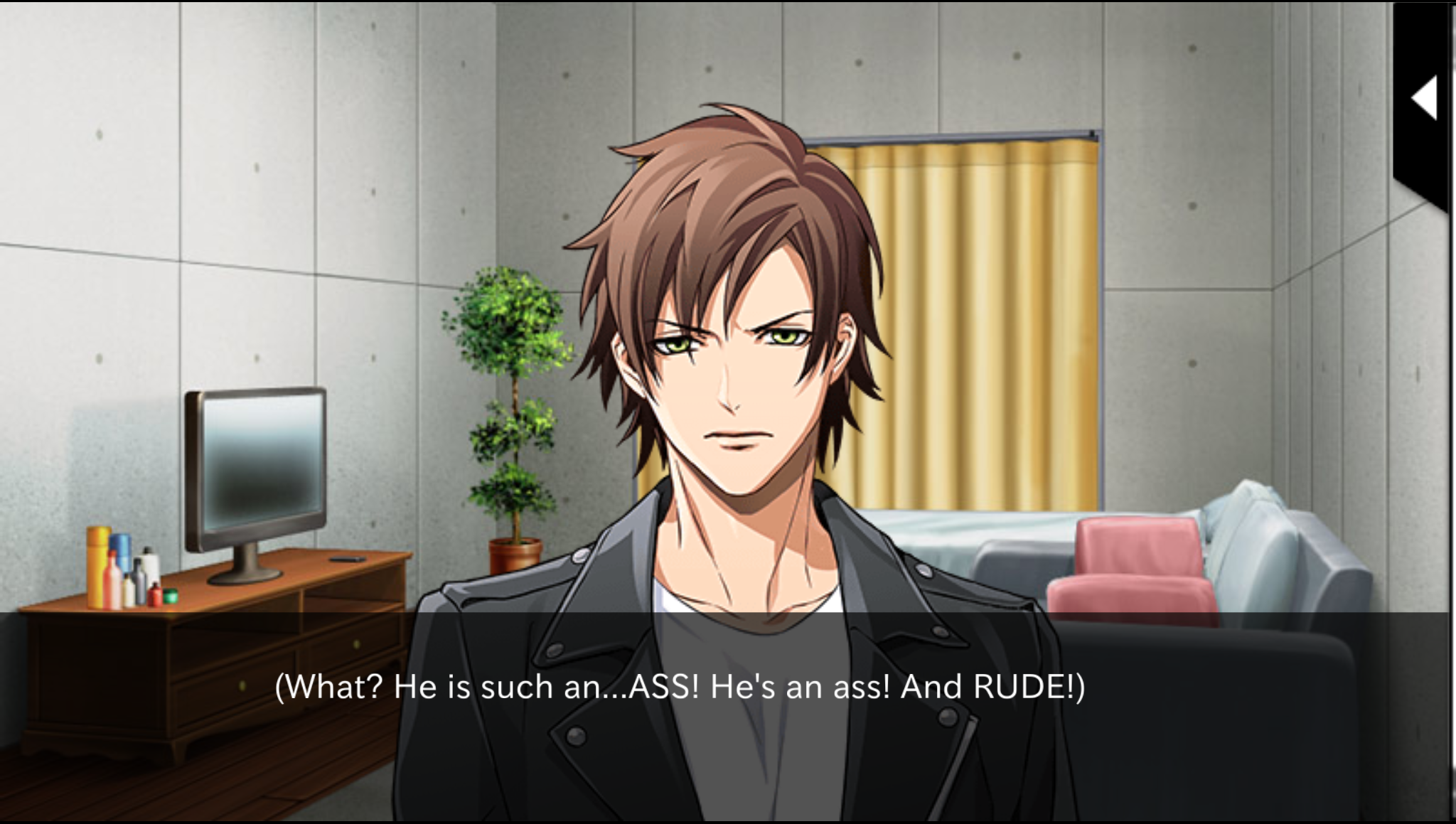 Masaharu Ryuzaki is a heartless, sniper and the token alpha male of the group. He literally wastes no time threatening the MC into compliance with the help of his trusty gun. Did I mention that I’m not a fan of the jerky confident alpha male types? I did? Good, because Masaharu Ryuzaki is all of that and a bag of chips. I literally spent 95% of his route telling him to go eff himself. He is rude, tactless and a straight up asshole to the MC for the majority of the route, to the point that I wanted to punch the guy in the face! I was seriously having flashbacks to when I first played Eisuke Ichinomiya’s main story in Kissed By the Baddest Bidder, and that is not a place I want to go back too… I get it, the guys in this game are all criminals, so their morals are generally grounded in that ambiguous grey area, but sweet Jesus, there are limits!

I don’t care if dude is a trained killer, there are just some things you just don’t say. For example, there’s a point in the route where the MC is justifiably, at least in this instance, complaining about the guys not telling her anything about the enemies targeting her and you know what Masaharu says? He tells her to complain to her dead dad… -_- Really? The shenanigans only get better from there with Masaharu giving the MC the unfortunate nickname of Hachiko… yes, he named her after a dog… What is it with Voltage guys always comparing the MC to food and animals?! It’s not endearing, it’s not sweet… it’s annoying and I for one would like it to stop! But, it would be one-sided of me to only point out Masaharu’s bad points without at least mentioning his good moments (though they are few and far between)… 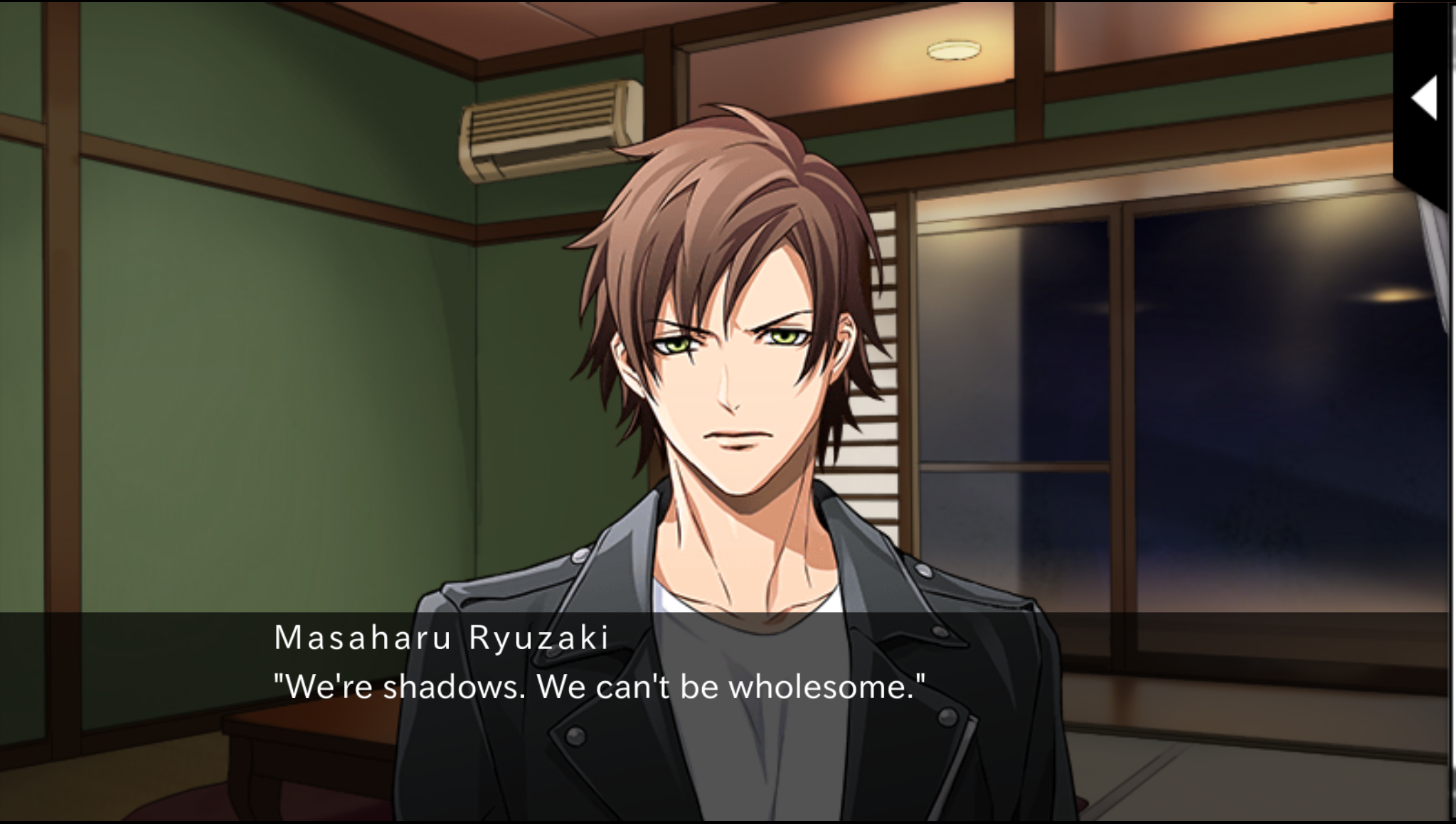 Like all alpha male characters in Voltage games, there is more to Masaharu than meets the eye. Due to the nature of his profession, Masaharu has had to live a rather cold and lonely existence prior to meeting the MC. When the whole world is your enemy the only person you can trust is yourself and your gun. But when a momentary lapse in judgement leads to the death of a close ally, Masaharu completely closes himself off to other people in order to avoid losing anyone else. So for all my complaining, beneath all of his swagger and pomp, Masa is really a genuinely kindhearted guy.

Now, that doesn’t mean I necessarily agree with his methods… I just understand where the guy is coming from. Being close to other people would cause him to empathize with them, which would in turn make him an ineffective sniper. 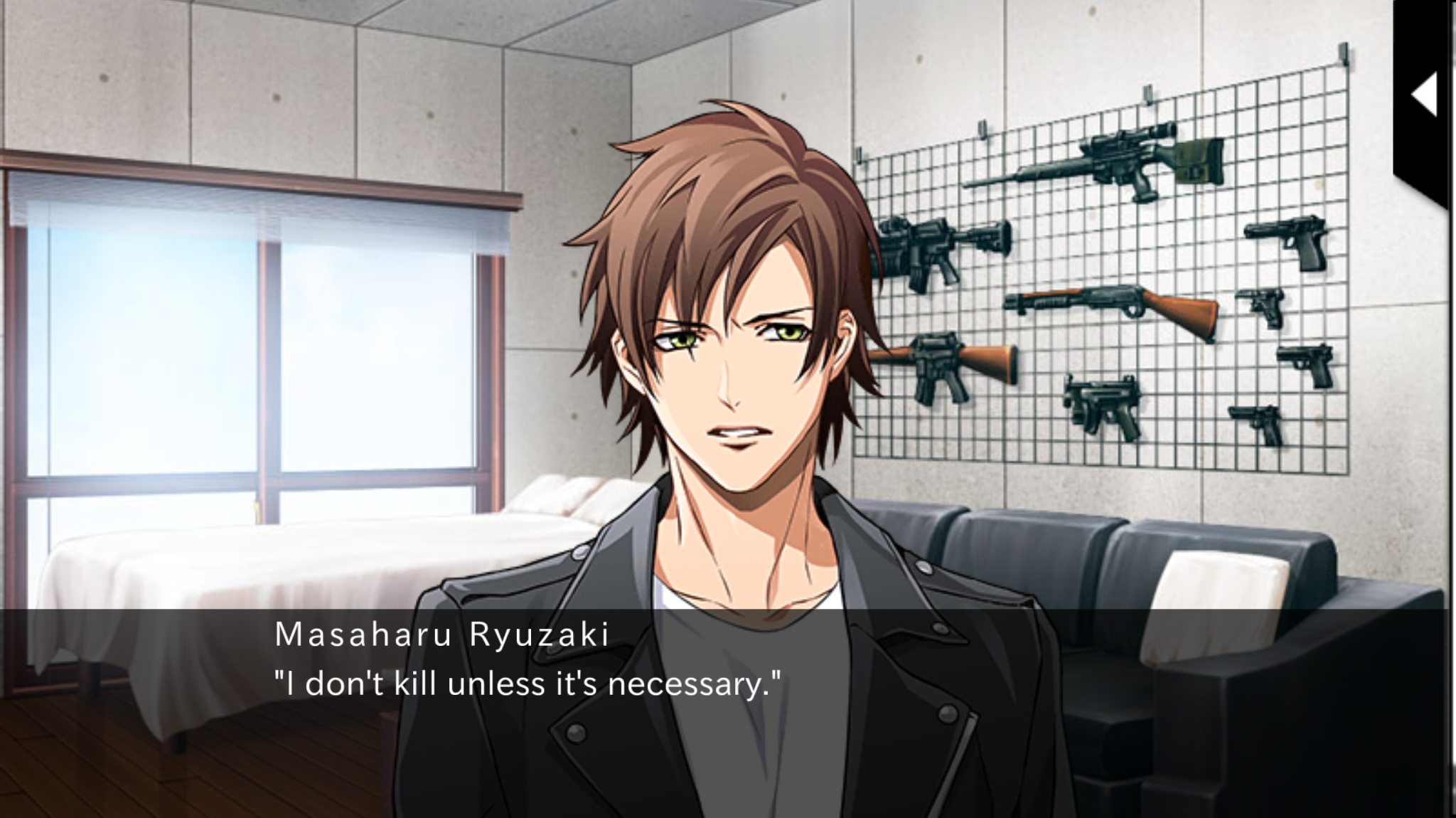 Hired guns aren’t supposed to feel, they’re supposed to follow orders and move on, which serves as the main source of conflict between Masa and the MC. At first he see’s her kindness for others as a weakness, pointing out how dangerous trust can be for someone in her current situation and time and time again his sentiments prove to be right. Every single time the MC trusts someone or interferes with Masa’s job, she winds up on the wrong end of a gun… But, because this is a romance game, her unyielding compassion sways the heartless sniper and he begins to become noticeably kinder towards her. Now, that doesn’t mean I enjoyed the romance in this route at all! If I’m being completely honest, the romance aspect of this route came completely out of left field for me, one minute the MC is calling Masa an asshole and cursing his name, the next she’s mooning over his perfectly chiseled pecs… We don’t really get any indication that the two even remotely like one another until around chapter 10… that’s chapter 10 of THIRTEEN! Uh, nah… three chapters is not enough time to tell a compelling love story, especially amidst all of the drama, action, and suspense…

I went into this route with a bias and I will fully admit to that, but damn it Voltage, there was absolutely nothing in this route that even remotely changed my opinion of Masaharu by the end of the game. Sure his backstory was tragic, and yeah, I feel for the guy, but all of the backstory was just too little too late! Voltage waited way too long to redeem Masaharu as a character and the fact that the cheerful and much more approachable Asuka Hino kept popping up throughout the route only made Masa’s negative qualities much more noticeable…

I’m getting tired of saying this, but this route would have been much better as a NON ROMANTIC STORY!!! I just needed more time to get to know Masa, ya know to get comfortable with him as a character… But, nope, all I got was Jerk-face McGee for 10 chapters, then 2 chapters of justification for his actions, and within those two chapters of justification, a hastily thrown together romance…. *sigh* Hell, Masaharu x Aphrodite (the cat) would have been a better romance story….

The only saving grace in this route was the MC! Finally, Voltage is listening to us!!! This MC gives me life… From the very first chapter she calls Masaharu on his BS, she isn’t like the meek MCs we’ve had in the past, this woman knows how to give just as much as she takes!

Overall, I was not thrilled with this route… Voltage spent too much time showcasing Masaharu’s negative qualities and not enough getting me to understand the reasons behind his actions… So, by the end, I really didn’t have a very high opinion of the guy. However, I will admit again that I generally dislike characters like Masaharu anyway….

What do you think about Masaharu? Do you like alpha male characters or do you find them frustrating? Which guy are you most looking forward to? Have you played any other Voltage games? Do you have a suggested route? Want me to review a specific game or character? Let me know what you think in the comments section. If you like what you see, like this post or follow Nice Job Breaking It, Hero! As always THANK YOU FOR READING!!