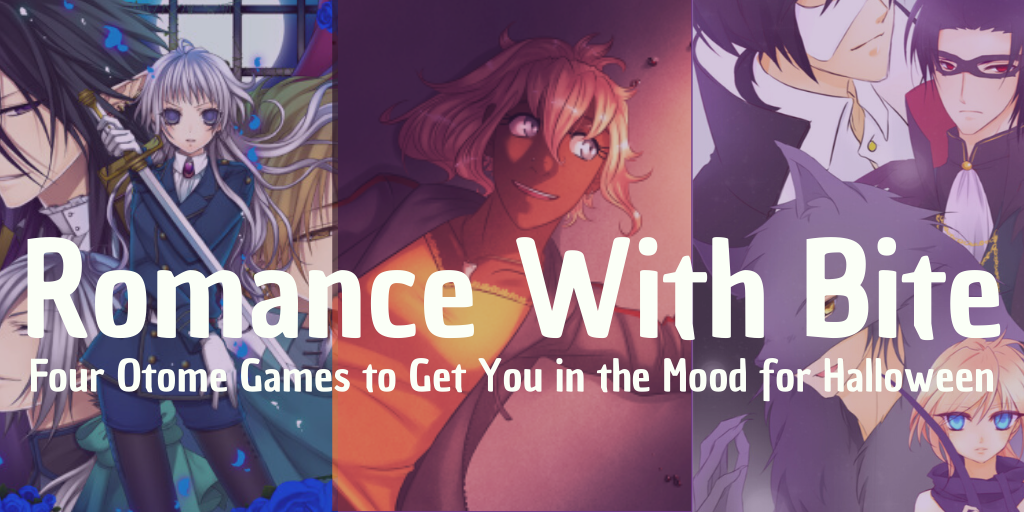 With Halloween less than a week away, I figured why not write a post about a few spooky fun otome games to get you all in the mood… Now, I will admit that not all of these are horror games, but each one has something Halloween-y about them. Maybe it’s a supernatural romance or maybe it takes place in a creepy fantasy realm or maybe the game takes place on Halloween, either way you’re in for a treat! 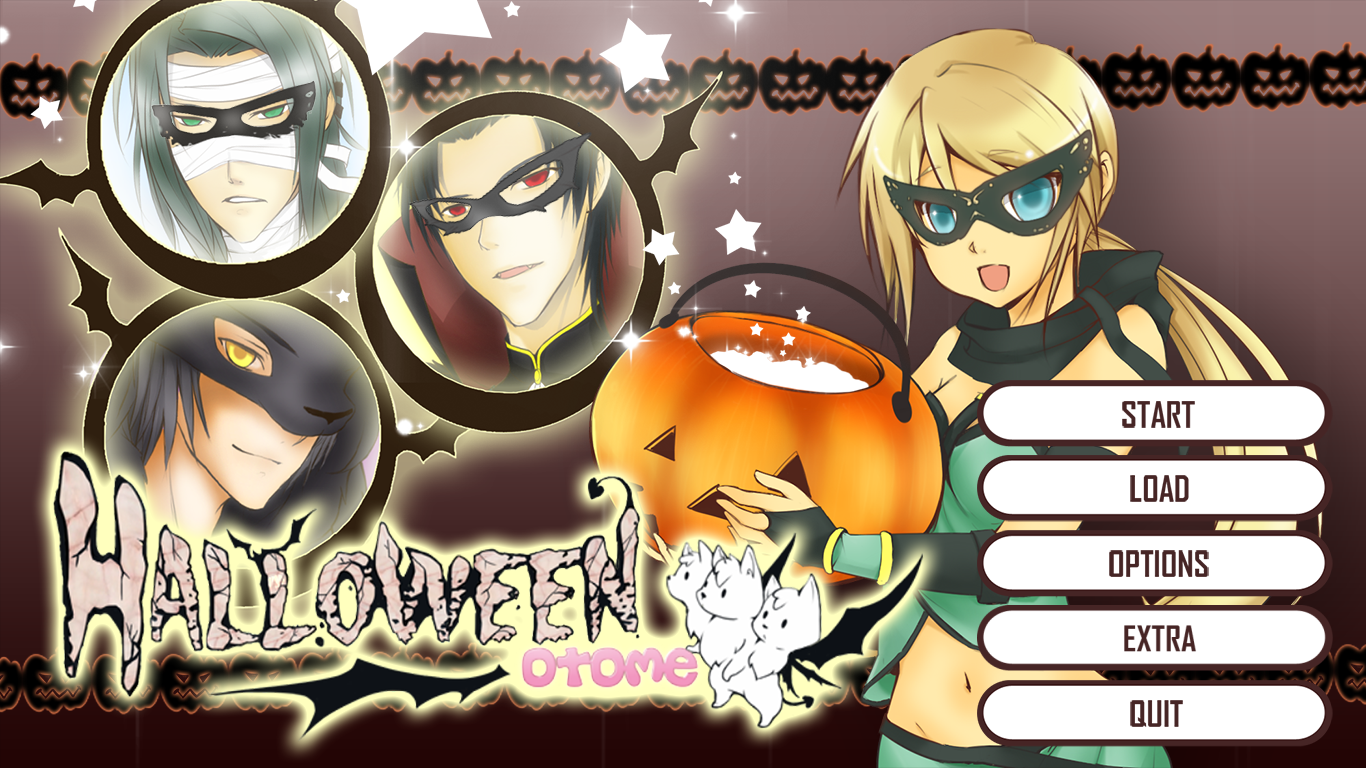 “You are cordially invited to the Annual Valdemar Halloween Extravaganza. Two weeks of luxury await you.

Let’s see if you can keep up the masquerade…”

Halloween Otome is an otome visual novel in which the protagonist, Emma Cee (name changeable) wins an invite to a most exclusive and sought out Halloween getaway. What she doesn’t realise is that it’s far from relaxing. The Halloween getaway turns out to be a annual game hosted for the rich and famous and every contestant is thrown into miscellaneous groups, challenged over the course of ~ 2 weeks.

What better game to start off a Halloween themed otome game top four list than, Synokoria’s  free to play PC visual novel, Halloween the Otome. I mean come on, it’s even got Halloween in the title, how much more festive can you get? Oh wait, how about I throw in a vibrant cast of costumed characters and a mysterious puzzle based competition and you have the makings of a wickedly fun game!

Each of the love interests added something special to the game, but my favorite by far is the Count! But, be warned he’s the canon love interest (his route contains a major spoiler), so I suggest playing his route last. However, I also really liked Mr. Bandages and The Werewolf, so definitely show those guys some love too!! <3 But, the real MVP was the protagonist, Emma Cee (get it MC…lol), she was a feisty, intelligent heroine who is much more than a proxy for the player and I just love her to bits! Plus she saves her teammates’s butts at several points during the game.

In addition to traditional otoge mechanics, Halloween has several mini games, each more challenging than the last. Of course you can opt out of completing the mini games and while it is possible to achieve the best romance ends with out them, I still recommend playing with them turned on during the first playthrough. Overall, I absolutely love every single thing about this game; the premise is fun, the characters are unique, and art is simply gorgeous… plus it’s free! 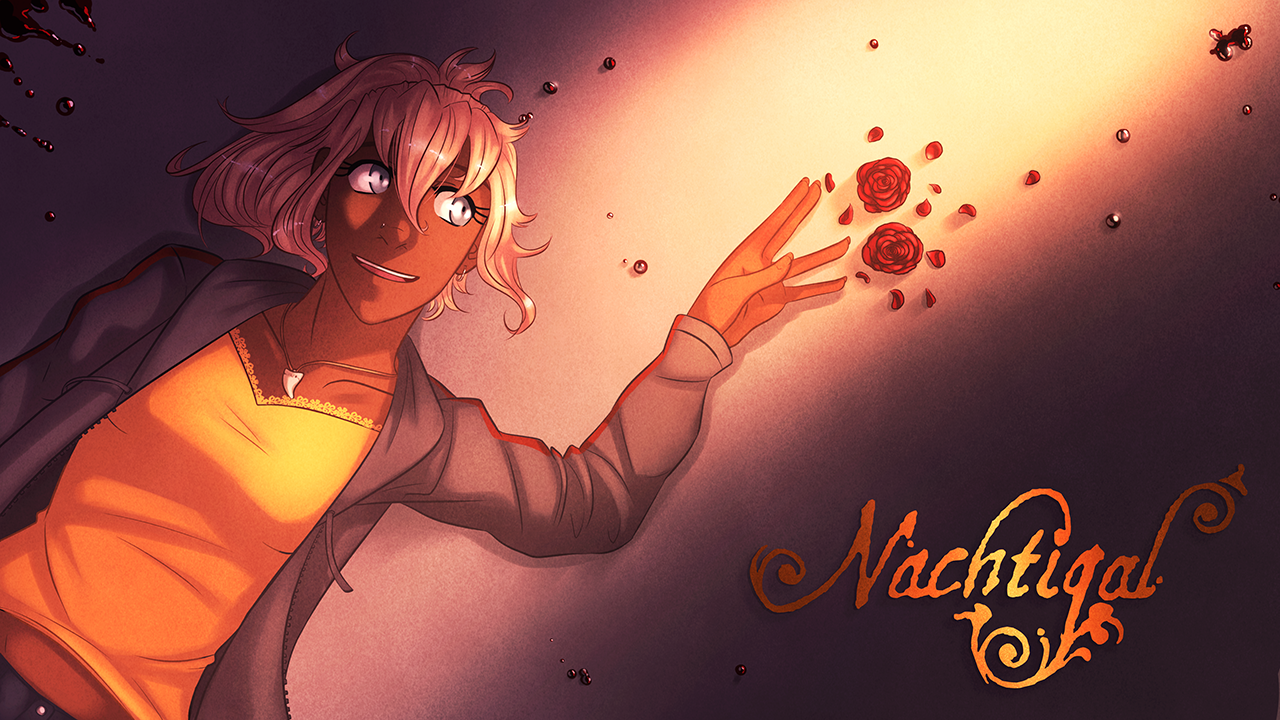 Nachtigal tells the story of Miranda Namatgira, a bright college student who travels to Belgium for a holiday. One evening, she loses track of time while sight-seeing and becomes lost in the woods. Just as she’s about to consider camping outdoors for the night, Miranda happens upon a hauntingly beautiful castle. She decides to venture inside, but nothing could have prepared her for the bloody sight she beholds there…or for the two vampires who capture her.

I stumbled across this game a few years ago when it was released and after a few lines of dialogue I was hooked! I am a sucker for vampire romance of any kind, hell, I read all of the Twilight books… don’t hold it against me. So, Cyanide Tea’s Natchigal was right up my alley, what’s more, the game offers not one but two vampire hotties!!

This game is the perfect example of wrong place, wrong time or is it curiosity killed the cat? Both work in this situation… long story short, the protagonist sees something she shouldn’t have, and gets captured in order to keep her from telling anyone about what she saw. But, since this is an otome game, instead of killing her, the vamps keep her locked up and eventually fall in love with her due to her strong moral fiber.

What sets Natchigal apart from the rest is that not everything is roses and sunshine… the bad ends are, bad, like trigger warning bad and the even the good ends have a bit of a bittersweetness to them. So this game isn’t for the faint of heart, but that depth makes this a very thought provoking game. 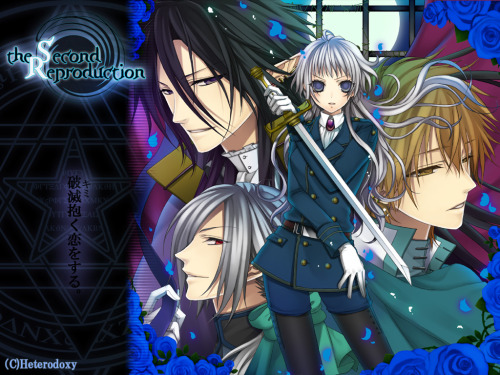 Christina was the third princess of Almenan, and born in the era of war against the Demons. Having the status of a “Champion”, Christina had countless battle victories upon her shoulders and was feared by the Demon race.

Being the most successful of her three sisters, her mother the queen sent her on a secret mission to assassinate the Demon Lord Gardis in return for his ruthless annihilation of the Kingdom of Crofts.

Obeying her mother’s orders for the sake of her kingdom, Christina set out alongside with her most loyal knight Lezette to take the Demon Lord’s head, and to bring peace to the land. But they soon discover the Demon Lord and his people are not as ruthless as they have been told all their life.

So this next game is a patched game so you’ll have to get a copy of the original Japanese version of the game to play it. However, the game is no longer available for purchase since the developer Heterodoxy went under a few years ago, but I’m sure with a bit of googling you guys can find a copy of the game somewhere… Also The Second Reproduction is a spiritual successor to another Heterodoxy game, Queen of Darkness. But, I should clarify that you don’t really have to play the first game to understand this one, however some of the characters from the first game are mentioned in passing in SR.

So, the main reason I like this game is because it doesn’t really read like a romance, instead it reads more like a supernatural adventure visual novel that just happens to have romance in it. At the start of the game the protagonist, Christina has zero interest in romance, her only goal in life is to serve her country by killing the Demon Lord, Gardis. She’s a cold blooded killer and trained battle tactician, so far removed from the typical otoge heroine and I for one welcomed the change. But, I will admit that her personality could rub some people the wrong way, but at least she gets better as the story progresses. 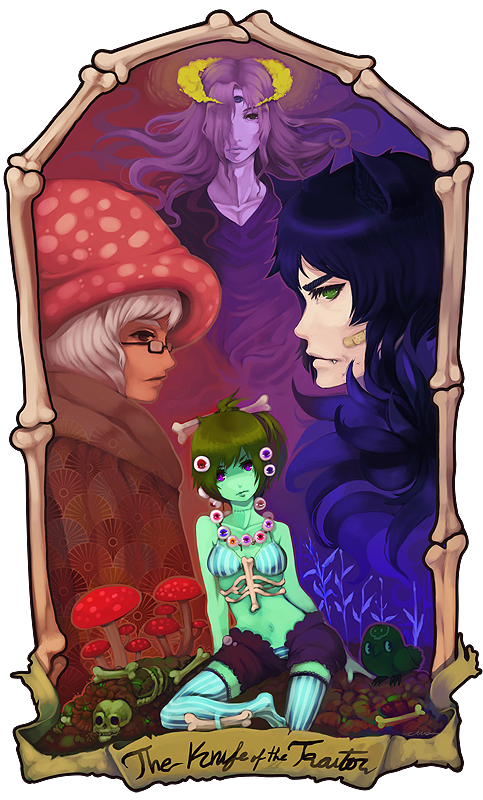 The Kingdom of Ulla was made of the bones and guts of their enemies.

The new successor to the throne was the bloodthirstiest of all the heirs.
But inside the kingdom was a traitor.

He brought down all.
Even the new successor.
And all traces of her vanished mysteriously…

At its core, The Knife of the Traitor is a mystery with romance thrown in for kicks and giggles. After the protagonist, Lady Os, is revived after a botched assassination attempt it is up to the Lady and her loyal servant, Corvus to find out which of the castle’s occupants is the culprit. Over the course of the game you piece together the mystery while gaining affection points with one of four potential love interests.

The most appealing aspect of the game is Clua’s vibrant art style, which lends itself nicely to the surreal fantasy world of the game. Whether it was Clua’s chibi CGs or her normal sprite designs, I just couldn’t get enough of how pretty this game was!! But, I must say that my favorite love interest is actually a special mystery character route… I won’t spoil it, but dayum homeboy was fine!!

So that’s my list, were there any games you thought should have been on the list that weren’t? Something on the list that you think shouldn’t be? Let me know what you think in the comments section. If you like what you see, like this post or follow Nice Job Breaking It, Hero! As always THANK YOU FOR READING!!

10 thoughts on “Romance with Bite: Four Otome Games to Get You in the Mood for Halloween”