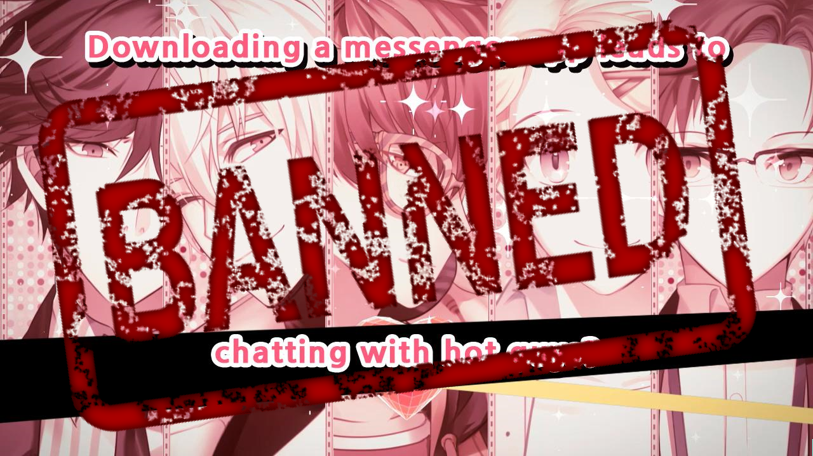 Edit (9/25): I have been receiving a large number of comments from players that are receiving bans for reasons other than turning back the time on their devices. If you feel that you have been wrongfully banned, contact Cheritz directly and submit an official report on the issue through: help@cheritz.com!

Edit 9/24: The petition was removed from Change.org due to negative backlash on twitter. The creator posted an explanation on Instagram, but it has since been removed.

I really thought that I was done writing about Mystic Messenger, but the recent update has many in the fandom up in arms and I think it’s time I gave opinion on the matter.

I do not stand behind that silly Petition, in fact, I think the whole thing is utterly ridiculous! For those who don’t know, Cheritz just released an update that changed some things about the Mystic Messenger experience:

First, I see absolutely nothing wrong with these updates. Cheritz is still a relatively small developer and they spent a lot of time and money to make this game a reality. So, it only makes sense that they would try to recoup some of their investments. Developing a game, especially a voiced game requires a considerable amount of money and time. And the fact that Cheritz decided to make the game a free to play app is very generous on their part! So when I saw that some angry fan went out and created petitions against Cheritz on Change.org, I was a little pissed off and here’s why…

*This post is my opinion and it’s cool if you don’t agree with it, I am open to hearing what everyone has to say, but I WILL NOT TOLERATE any personal attacks. Do not use my comments section to attack anyone, be sure to keep all discussions tame.

First, to all the folks butt hurt about being banned for turning back the times on their devices… Come on, you knew it wasn’t part of the intended gameplay when you did it, I mean why else was it not a part of any of the guides, FAQ pages, or official Cheritz releases? Because it wasn’t sanctioned by the developer and it constitutes as cheating. Accept your fate and move one… If you were a time turner and you managed to escape the bans, count your lucky stars and don’t kick up a fuss. Simple.

Unfortunately, some single minded individuals decided to unleash their rage at Cheritz by creating a petition on Change.org. Said petition calls for Cheritz to reverse their Permanent Bans and instead reduce them to Soft Bans… Ummm, no. How about you learn from your mistake and start a new account, only this time follow the rules?

“Mystic Messenger update the game and put a ban to anyone who abuse the game. We all know it is an amazing game but they should be aware that most of the players are students who couldn’t participate in the chatrooms due to school and we cannot stay up at 3 am just for the game either. “

But, what really pisses me off about the petition is the fact that the creator tried to justify their cheating by using the excuse that they are poor students. I know a ton of poor students that play video games and just a few months ago I was one of them. I know what it’s like to be a student; the papers, the assignments, the classes, the stress… believe me, I know the struggle. But, I still managed to find time and funds for my gaming hobby, through moderation and an air tight budget. Not, by complaining about it. So to see someone who claims to be a student using their educational woes as justification for their misdeeds is unacceptable!

“Cheritz needs to adjust the chatrooms time to make it convenient for everyone. Student friendly mode would be helpful for students who barely has time to play.”

Okay, was I the only person to actually read the Cheritz page? Because, I’m pretty sure they say somewhere on their site or in their promotional videos that the game is in REAL TIME! You knew what you were getting yourself into when you started the game. It should not have been a surprise that chat rooms occur at all hours of the day and night, that’s what real time means. And for those of you that insist that Cheritz didn’t tell us about it before hand, people have been talking about the game since it’s release in July… it’s September.

“Plus, hourglasses are really expensive and hard to obtain.”

Okay, like I said before, I was a student only a few months ago and even now that I’ve graduated my funds are still extremely tight. But, anyone that is complaining about the price of Hourglasses has lost their ever loving mind. The Hourglasses in Mystic Messenger are not that expensive, especially when compared with the cost of some pay by route mobile otome. In fact there is a detailed cost breakdown of the game over at It’s a Wonderful World, this blogger outlines the total number of Hourglasses and cash needed to complete the game in one go.

Now that “hard to obtain” bit at the end, are you serious? Cheritz gives us free Hourglasses every single time they update the app. Even this last “controversial” update shelled out a whopping 60 HOURGLASSES. Cheritz has been extremely generous to it’s fans and it is a shame that fans are willing to overlook this fact so easily. How disrespectful and selfish can you be?

I’m not sure if this is a recent edit or what, but the petition creator goes on at length about their love of Cheritz. But after the mini tirade against the Perma Bans, it’s too little too late. Not to mention, I’m disappointed that there are 1,500+ signatures in support of the petition. Really guys? Just count the account as a loss and move on, start a new account only this time, DON’T tamper with the time! It’s okay to miss chats, Mystic Messenger isn’t life or death. Besides that’s what hourglasses are for in the first place, use them to replay the chats you missed or purchase a days worth of chats in advance (that way you don’t have to worry about missing a chat).

Finally, as for the Permanent Ban of all time turner accounts, I agree with Cheritz’s decision. They were working on this game for quite some time before they released it in July and that took a lot of money. By cheating you are denying the staff of revenue that would otherwise be put towards paying staff AND for funding future Cheritz releases. So, how about we lay off the hate and take a little time to reflect.

This has been a great year for the otome community; we’ve had a ton of great upcoming announcements and we are finally getting some much needed notice from established game companies in the West. Let’s not let a few sour grapes ruin the momentum! Let’s learn from this experience and move on with all of the grace and poise I know you guys are capable of, kay.

So what do you think about the recent backlash? Do you agree with Cheritz’s decision or do you side with the upset fans? Do you think this will effect the future of otome games in the west? Let me know what you think in the comments section and as always THANK YOU FOR READING!! If you like what you see, like this post or follow Nice Job Breaking It, Hero!

65 thoughts on “Mystic Messenger Bans and the Petition”