If you guys remember, Isami Kondo was one of the routes I was most looking forward to in this game! My usual go to are tsunderes and megane intellectuals, but as I’ve gotten older, I’ve found myself drawn to the mature types more and more. Well, in Era of Samurai: Code of Love the good humored Shinsengumi leader, Isami Kondo definitely fits the bill!

Isami Kondo wasn’t a playable character in Hakuouki, so I didn’t quite know what to expect this time around. So, I was basing everything on his portrayal in the prologue and in each of the other routes in the game… and you know what, Kondo is pretty consistent across the board.

A smile as bright as the sun 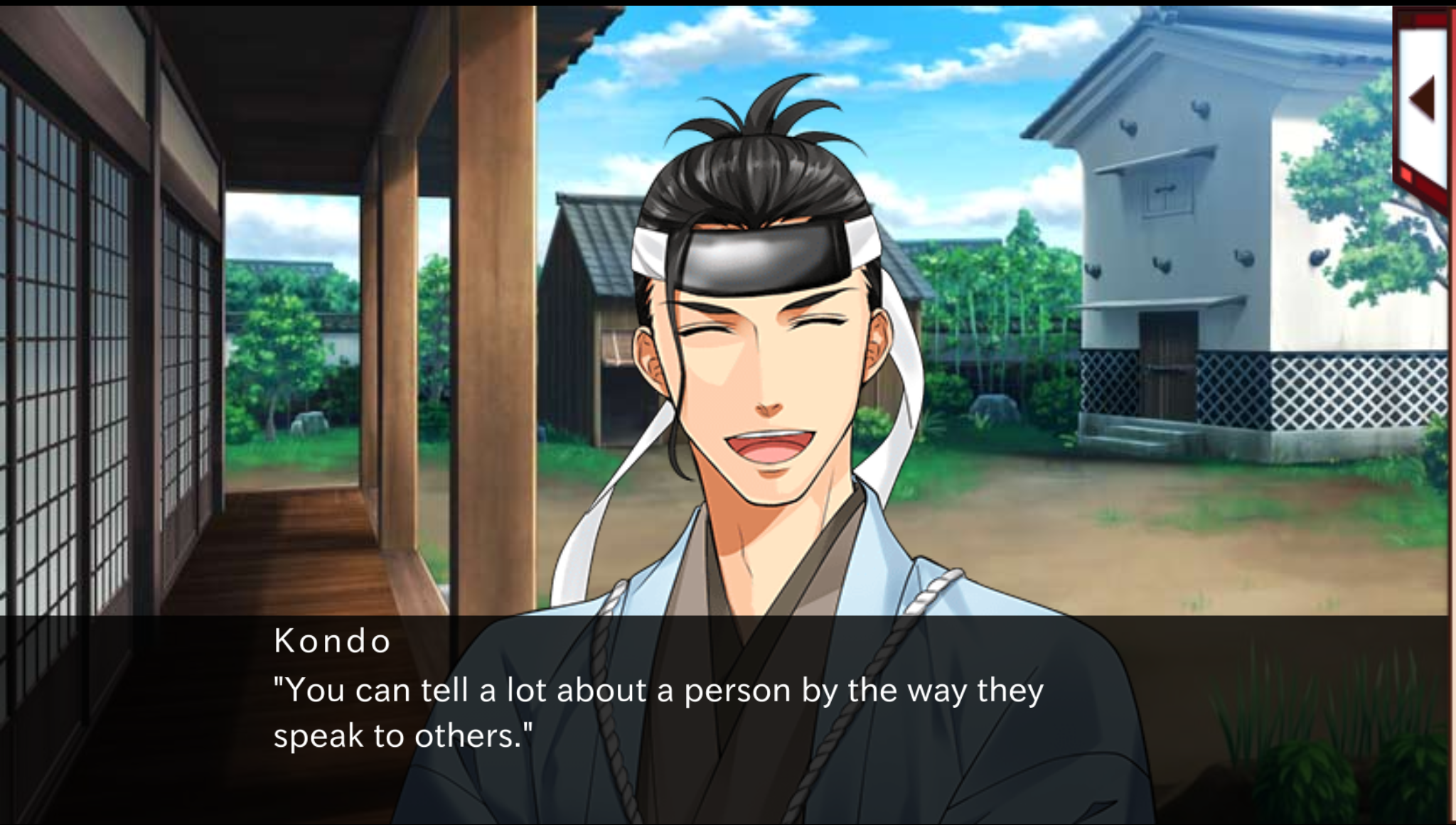 Despite his rather cheerful disposition Kondo is a capable warrior, whose skills as a general are second to none. But whenever he talks about his men, he’s like a completely different person. I guess you could liken Kondo to a proud papa, the way he talks about his men is heartwarming. He speaks about each one of his captains with a level of reverence and love, that just makes you melt and it’s hard to imagine the guy even holding a sword (let alone using one). Kondo proves that you don’t need to be a ruthless leader to command respect, all you really need is a selfless heart and clear aspirations. While his swordsmanship is impressive, it was his dream of a future free from bloodshed that convinced the demon faced Hijikata to join him with the Shinsengumi.  And it was his benevolence that drew wayward souls like Okita and Saito into his ranks. It’s not hard to understand why his men love him so much, his laughter is contagious and his smile is just so warm and inviting.

Like the other men and captains, Kondo was not a samurai prior to joining the Shinsengumi. In his younger days he was the son of a farmer in Edo, it was only after he was taken in by a local swords-master that he began to dream of greater aspirations. 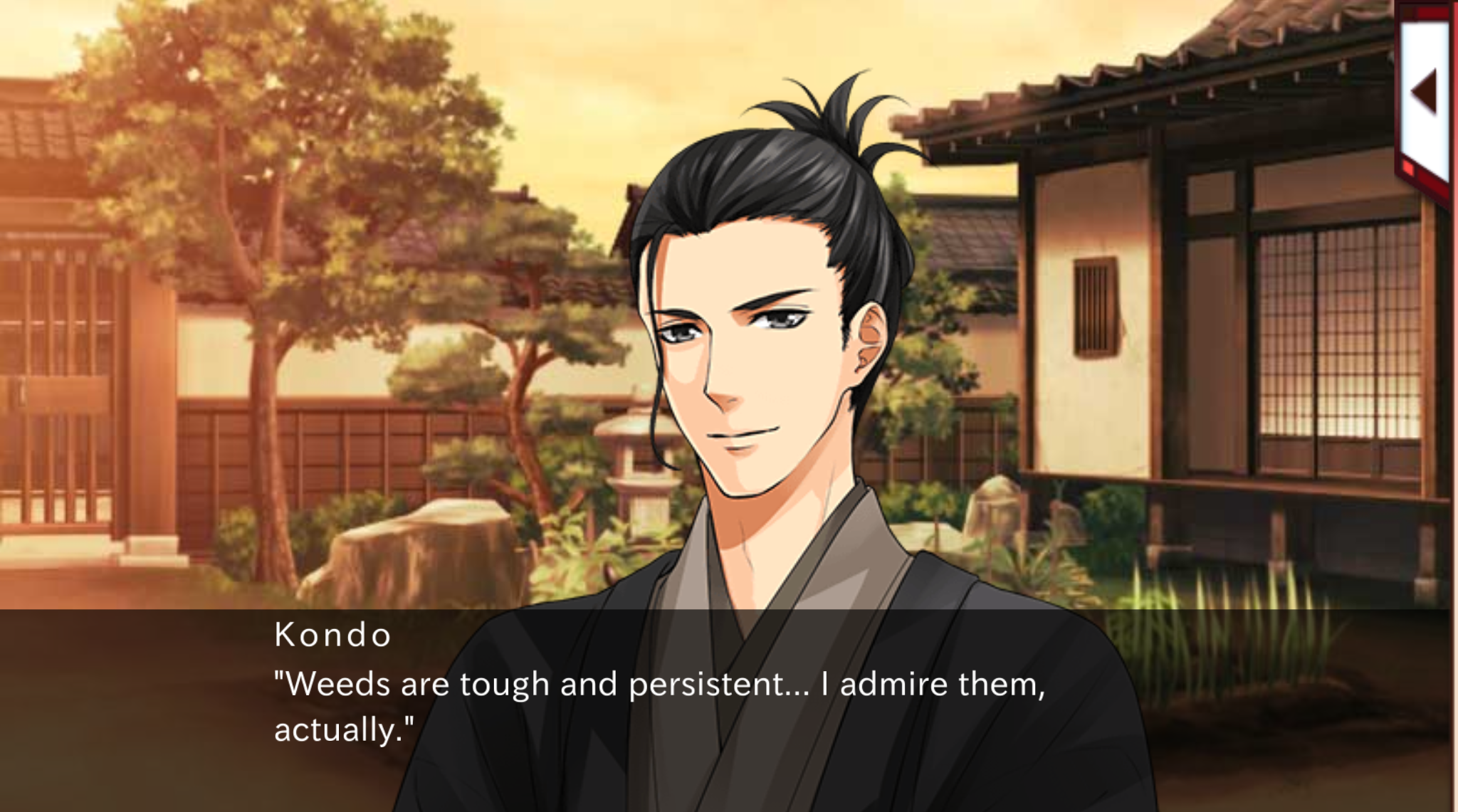 But, really Kondo is still a simple farmer at heart and a lot of that is reflected in his leadership tactics and the way he treats his men. He keeps a small garden at the Shinsengumi base so that the men have access to proper nutrition. On top of that he believes that each man no matter their previous status, has something to offer. When Yamanami is seriously injured during battle, resulting in his inability to wield a sword, it is Kondo who gives him a new purpose by promoting him to battle tactician. Then, when the men feeling pressure from the Aizu’s new special police force, the Mimawarigumi, lash out at the MC, it’s Kondo who sticks up for her. 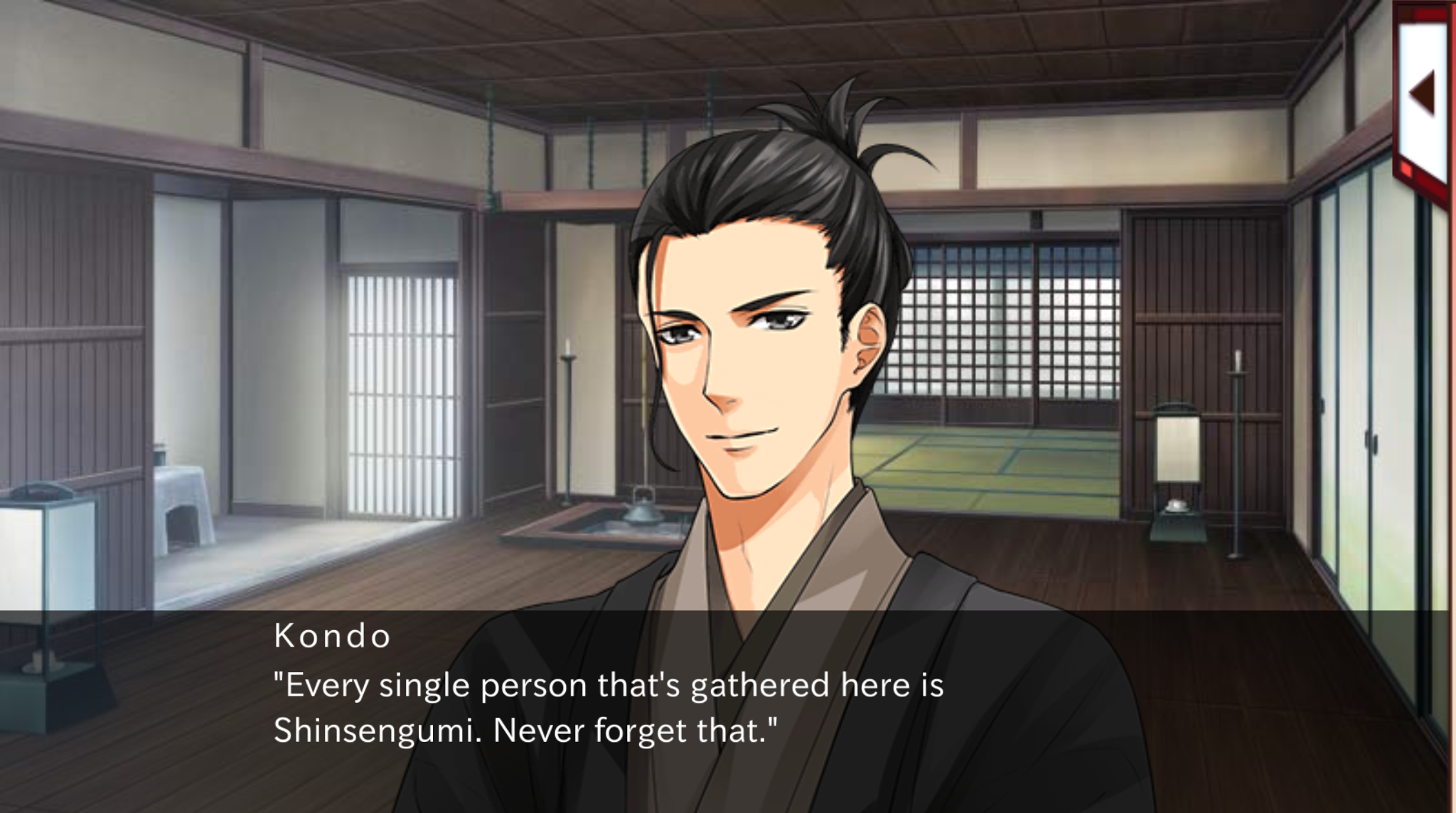 His unwavering respect for his men manages to inspire them, to achieve feats they would never be able to accomplish alone. But, even the great Kondo would be nothing without the support of his men, namely Keisuke Yamanami and Toshizo Hijikata. Both men work hand in hand with Kondo to keep everything on base running smoothly. Hijikata fulfills the role of the disciplinarian, while Yamanami serves as the brains. However, I couldn’t help but swoon over Yamanami every time he showed up in the route, Voltage needs to give that man a route of his own (hell, I’ll settle for a sub story)!

The central conflict of Kondo’s route focuses on the MC’s growing affections for the good-natured general. But, love is not easy for our love struck MC… For once, Voltage actually kept some historical facts intact, because Kondo is married. Yes, you all read that right, Kondo is still married at the start of the route, so the MC falls in love with a married man. 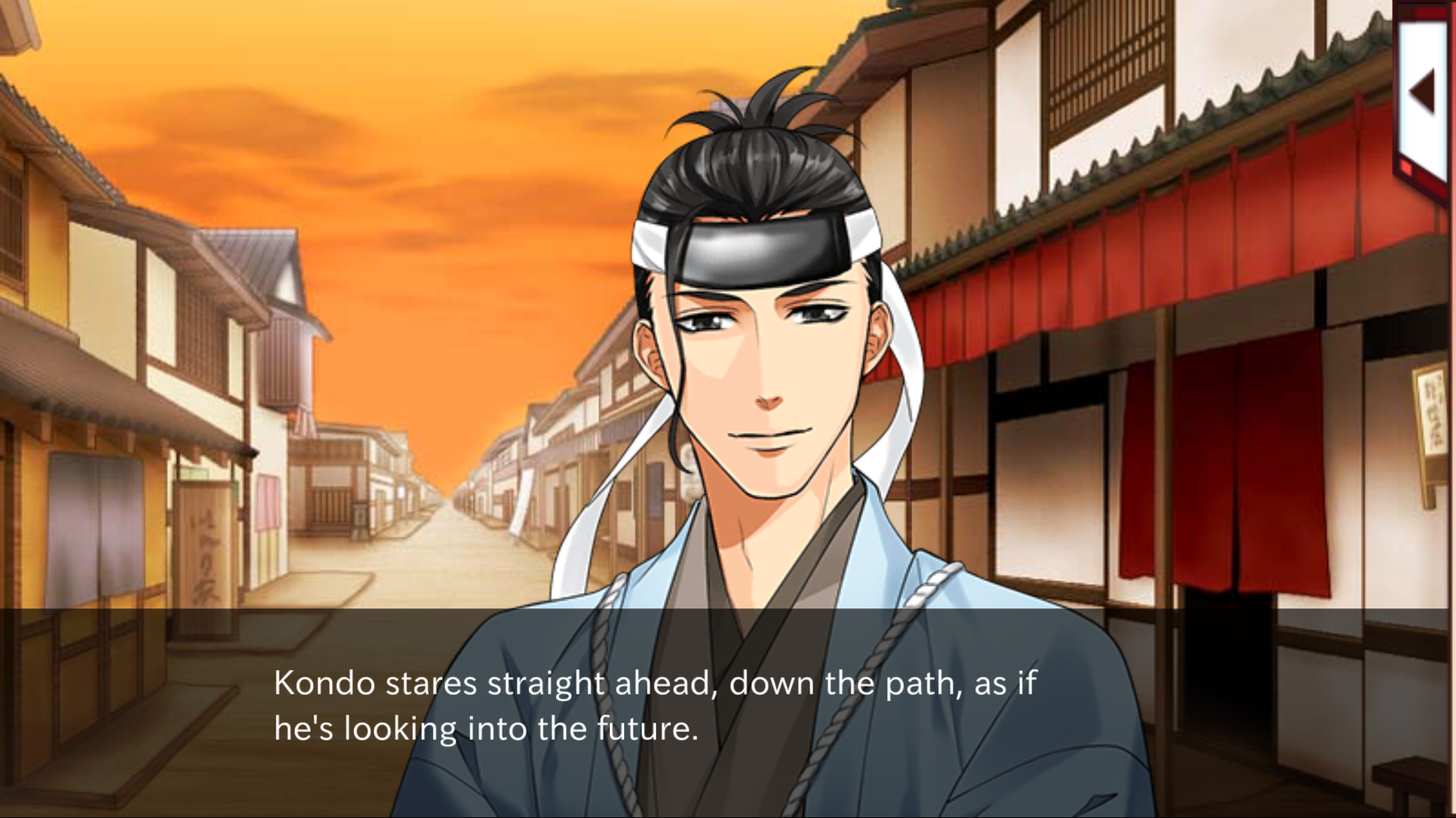 So for the majority of the route, the romance is purely one-sided, and Kondo’s gentlemanly demeanor only makes the MC fall even more hopelessly in love with him. I even fell for the guy, so when the MC declares that she is in love with Kondo at the end of chapter 3, I completely understood where she was coming from… Kondo is the perfect guy! His hopeful attitude isn’t just a facade, Kondo genuinely believes that the Shinsengumi are working to bring peace to Japan by protecting the capital. He is willing to do whatever it takes to see his dream realized, even if it means he has to make some sacrifices in his own life. Kondo is able to remain so positive when things are at their worst, because he’s fighting for something bigger than himself, he’s fighting for the future.

Praying for your happiness

I’m going to keep this short, because quite frankly, I was disappointed with the MC in this route. What happened Voltage? In the other routes the MC was a capable medic and an all around versatile character. However, in this route the MC spent most of her time mooning over Kondo (not that I blame her, he’s swoon worthy). But, I couldn’t help but want more from her, she really didn’t do anything noteworthy…

Okay, so I like Kondo as a character and his story was actually well written, but for some reason the whole thing just kind of fell flat for me. A route that should have taken a few hours to finish took me three days, and I can’t honestly figure out what was wrong with the route. I guess everything took a backseat in this route… The plot wasn’t completely Shinsengumi focused like Hijikata’s and there wasn’t a tragic past to deal with like there was with Okita and Saito… Kondo’s route was pretty bland in comparison. Even the fact that Kondo has a wife is downplayed so that it seems like little more than an afterthought.

As for the romance… meh, I’m not completely sold on it. For most of the route Kondo treats the MC like a daughter or a kid sister, not once did I feel like he viewed her as a potential lover. He even thinks it’s a joke when the MC confesses her love for him, talk about burn.

I feel the same way about this route as I did about Hijikata’s route, it would have been much better if the romance had been removed completely.  But, even so, I don’t hate the idea of the MC and Kondo pursuing  a romantic relationship, I just wish it had been executed better.

There are two endings available in Era of Samurai: Code of Love: Written by Fate and Written by Love. In the Written in Love Ending, the Choshu are defeated and Kondo isn’t injured during the siege. During the journey back to base, the townspeople even show up to congratulate them! After everything has settled down, the MC and Kondo share a passionate kiss under the morning sun. In the Written in Fate Ending, the Shinsengumi attack the Choshu base and Kondo is severely injured. The near death experience is enough to spur him to pursue a relationship with the MC.

While it isn’t my favorite Voltage route ever, it still did a fair job of introducing the reader to Isami Kondo. But I have some reservations in recommending it, the route is kind of bland, but I absolutely love Kondo as a character. I just feel like Voltage dropped the ball with this route.

17 thoughts on “My Lover is the Leader of the Shinsengumi-Era of Samurai: Code of Love- Isami Kondo”