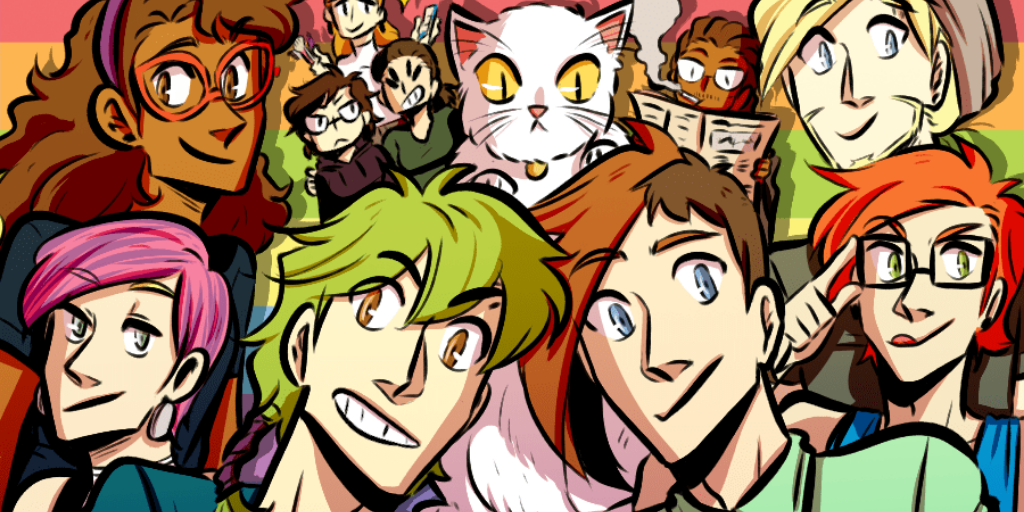 TGIF! Here we are again with another Fangirl Friday! This week I’m covering another webcomic! Rejoice! I have been following this comic for awhile now and it has only gotten better over time!! The comic I’m covering this week is Hazy London (formerly Technicolor London), a  BL slice-of-life, drama, comedy webcomic series by Scotty.

“Toby Landon’s love life is a bloody mess.  His on and off girlfriend has once again tossed him aside.  His mate Mark gives him some advice: Try something different. With a kiss, the lives of these two friends go from being black and white to being full of vivid color. But, all colors can get a little hazy…”

It’s no secret that I’m a fan of BL works, I’ve even highlighted a few in past Fangirl Moment posts. So, when it came time to write this week’s Fangirl post, I just knew I had to cover Hazy London… I started reading this around the time I started grad school, so it’s been about 2 years now and I have loved every single page! I’m actually surprised I didn’t write about this gem sooner, this is by far one of the best webcomics out there. I usually don’t keep up with ongoing series very well, but with Hazy London I just about broke my F5 key every week waiting for updates!

I was initially drawn to the series because of the steamy make out session in chapter one, but I stayed for the dynamic characters and the fantastic story. For some the relationship between Toby and Mark takes off rather quickly, one minute their talking about failed relationships the next they’re jumping each other’s bones. Even I thought, well that escalated quickly, but after delving further into the story and learning about Toby and Mark’s past… let’s just say that it’s a wonder they didn’t jump into a relationship before the first chapter 😉 .

Despite the faster than a kiss events of the first chapter, the author did a fantastic job of selling me on the relationship. Toby and Mark were friends first and even after they enter into a romantic relationship,  they never really lose that bond. If anything, a romantic relationship between the main pair seems like the natural next step in their relationship. But, like the official description says, even the most colorful and vibrant things can become a bit… hazy.

The story is rather upbeat but, it’s not without a healthy dose of drama and  angst, to keep the readers on their toes. Most of the conflict is caused by Toby and Mark’s personal hang ups and preexisting insecurities, but there are times when other characters shake things up. Hazy London features an expansive and vibrant cast of characters that all manage to add a little something to the overall narrative. I love the characters in this comic! While all of the side characters are connected to the main couple in some way, they are in no way just one off characters. They have lives, jobs, families, and stories and I couldn’t help but fall in love with each and every one of them! Every character has their own independent narrative within the comic and I was especially impressed with the level of detail the author put into every single story.

Like I said earlier, I have been following this comic for about two years now so I have watched this series evolve over time. The art is great, and I am impressed with how far the author has come artistically… just wow! The style fits well with the story and I just can’t get over the character designs, each character has their own style which is reflected through their constantly changing wardrobes and hairstyles. The story is fun, with just enough drama to keep you coming back for more! This is a masterfully woven narrative and I can’t wait to see what the future has in store for the characters!

The series is currently on-going, with updates on Mondays, Wednesdays, Fridays (though there are short breaks every now and again). If you haven’t already, give this webcomic a read!! Hazy London is a fun BL webcomic with a lot of heart that is sure to add a bit of color to your life!! Definitely worth the read!