No matter which adaption of the Shinsengumi story you play, Hijikata is always the same, so I kind of knew what to expect from Hijikata before I even started this route. Well Voltage did not disappoint, he turned out exactly as I would imaging the Vice-commander of the Shinsengumi to be.

Toshizo Hijikata is the terrifying right hand man and friend of Shinsengumi leader Isami Kondo. His cold stare and commanding battle prowess have earned him the nickname Demon Deputy among the Shinsengumi men. He is a man of honor an dignity, willing to do whatever it takes for the Shinsengumi, even if it means sacrificing something he holds dear. But is that all there is to the Demon Deputy? What does Hijikata the man want?

The moon on a cold winter’s night 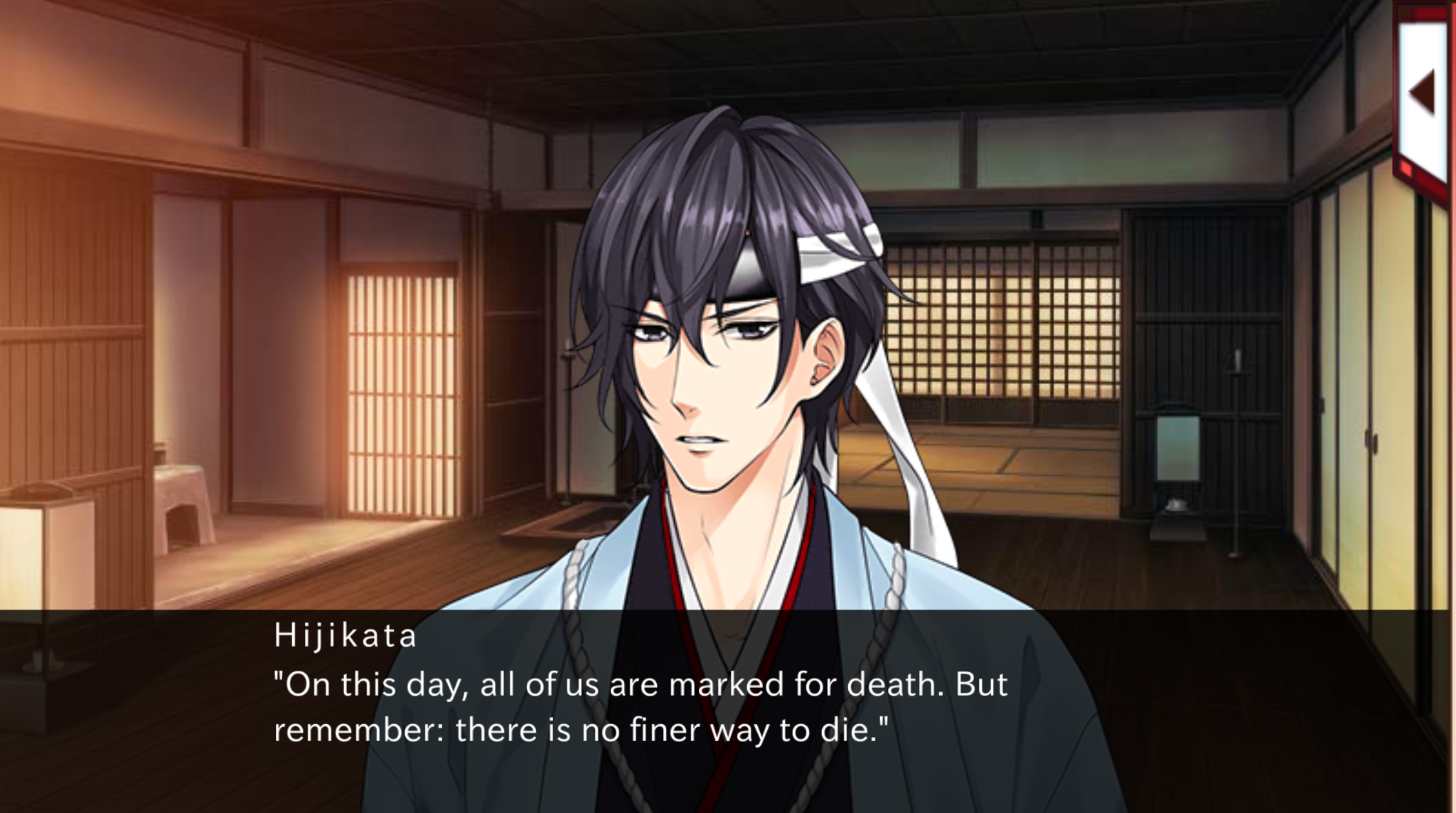 Hijikata is a warrior first and a man second, so I wasn’t expecting sweet words and flowers from him, in fact I would have been extremely disappointed by those things. This route was more about showcasing the Shinsengumi and their ideals than it was a cohesive romance story. As the vice-commander of the Shinsengumi, Hijikata is revered by his men and allies for his formidable fighting skills and tactical prowess. He lives for the Shinsengumi, devoting everything to their cause. In fact one could say that Hijikata is married to his job, his ideals, hopes and dreams are so entwined with that of the Shinsengumi that there is little else to Hijikata in the beginning of the route.  He feels that to give ones life in the service of the Shinsengumi is the highest honor a man can achieve. 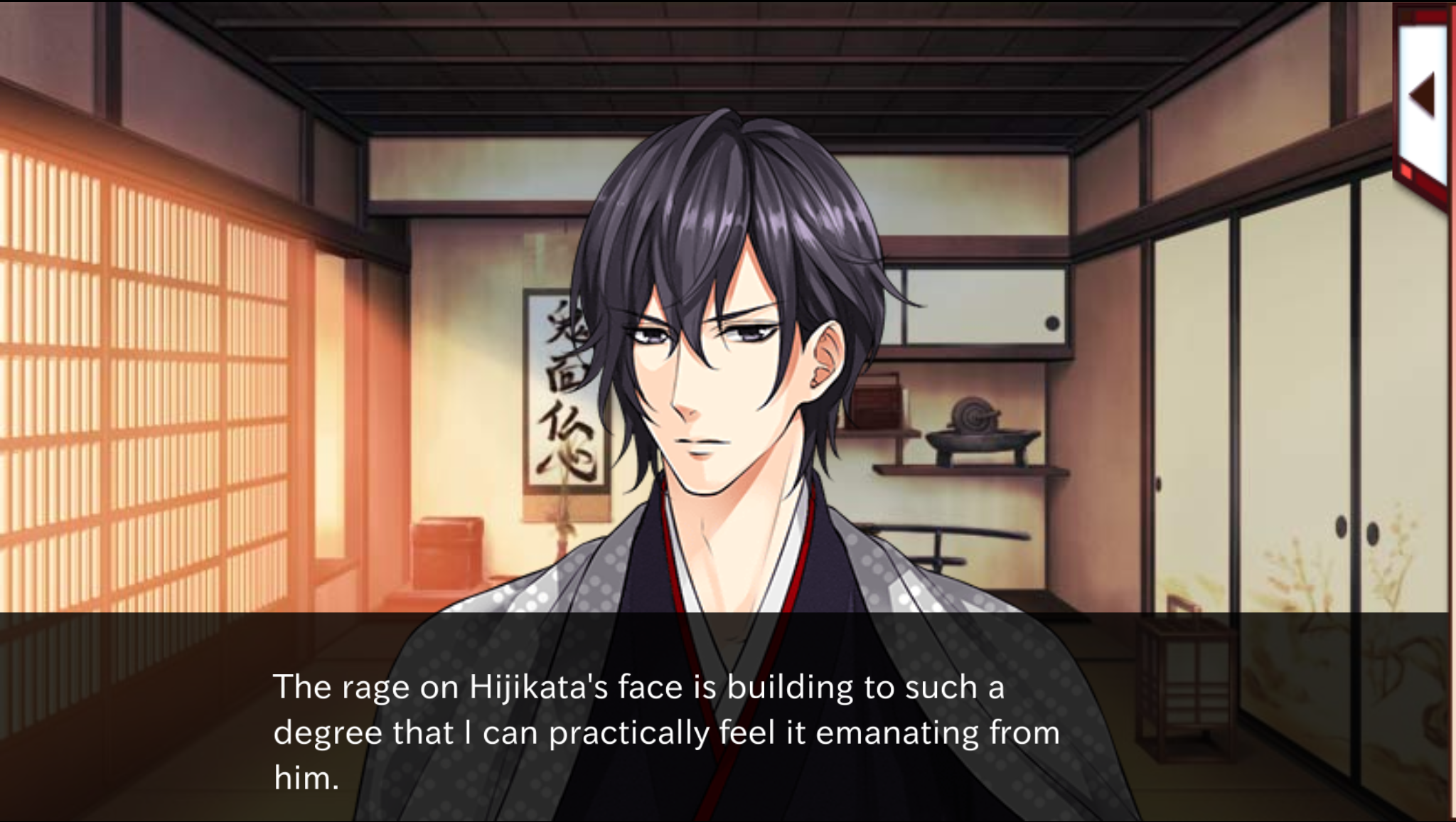 Hijikata has dedicated his life to the Shinsengumi and the attainment of peace, showing little interest in anything else. His single-minded devotion has lead the others to call him a Demon. Initially, Hijikata is just that, with his harsh manner of speech and his penetrating gaze, his very presence commands fear an obedience even among the other commanders. The only Shinsengumi members that seem to be immune to his imposing presence are Soji Okita and Isami Kondo. Both seem to have a intimate knowledge of Hijikata’s past, offering their support to the MC at multiple times throughout the route. Especially, Okita, who seems to have an almost brotherly relationship with the Demon Deputy. 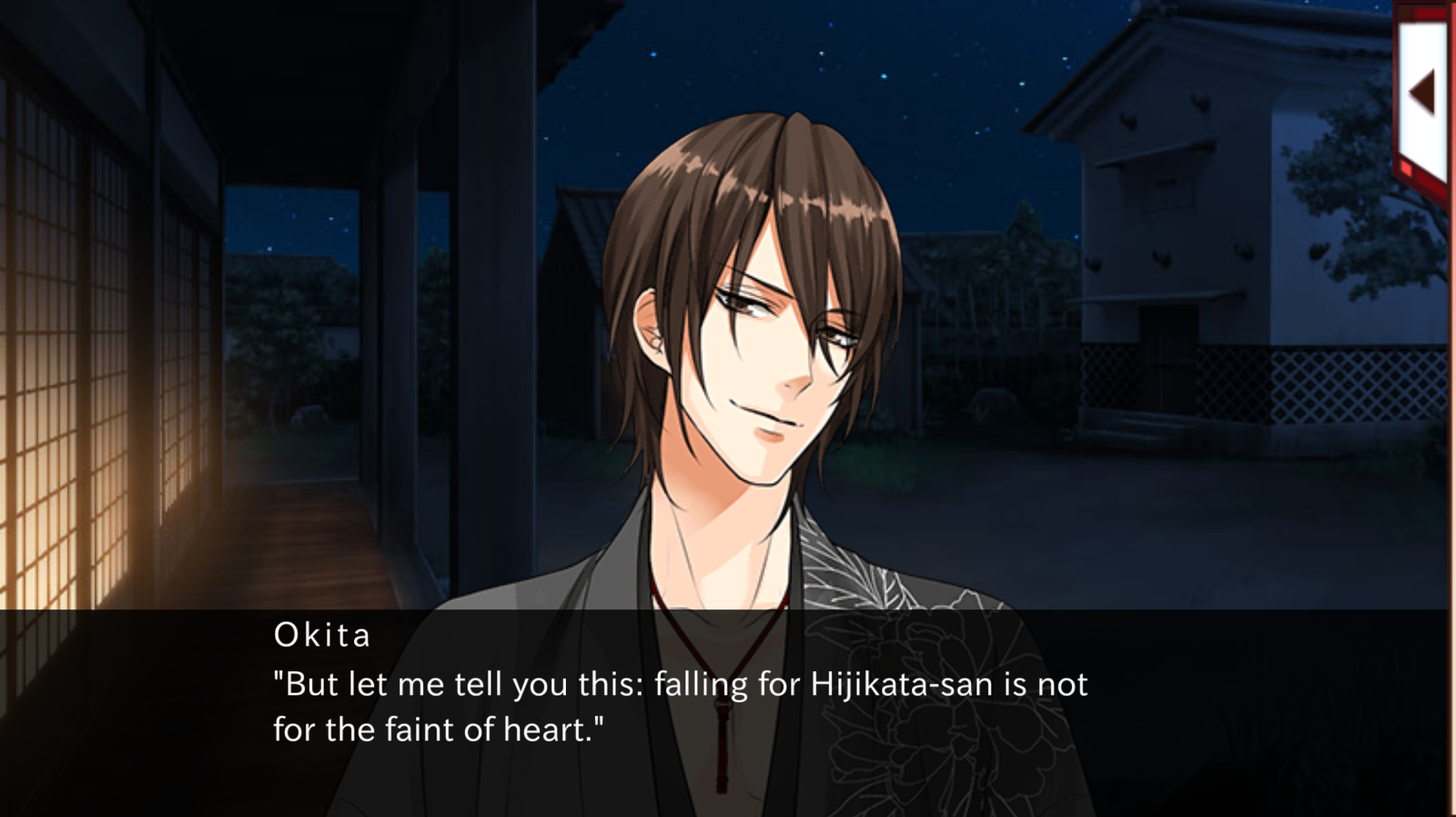 While Kondo’s jovial disposition, serves as a foil to Hijikata’s icy personality. If it weren’t for those two, I think I might have actually given up on finishing Hijikata’s route at all. Since, for the first five or so chapters Hijikata barely even makes an appearance and when he does it’s only to bark orders at the MC or one of his men. I can honestly say I kind of hated Hijikata in the beginning, he is…cold doesn’t accurately describe it…he’s a monster. When he’s not shouting orders or demanding things, he’s making everyone within five feet of him piss their pants in fear. Because of his personality Hijikata doesn’t like to have his time wasted so he can be extremely difficult to approach, so I completely understood the MC’s need to give him a wide berth. But, he isn’t a cruel man, Hijikata is a man out of time, like the rest of the Shinsengumi, he is clinging to a set of ideals that no longer matter in this new age. It is both admirable and extremely sad, to see Hijikata cling to the old samurai ways as the rest of the world comes tumbling down around him. His convictions are iron clad, so he has no tolerance for weak, wishy-washy people. He sees himself as the foundation on which the Shinsengumi name is built on, bearing the weight of his duty like a badge of honor. Sure he’s strict with his men, but the person Hijikata is the most strict with is himself, he refuses to allow himself to look weak in front of anyone. 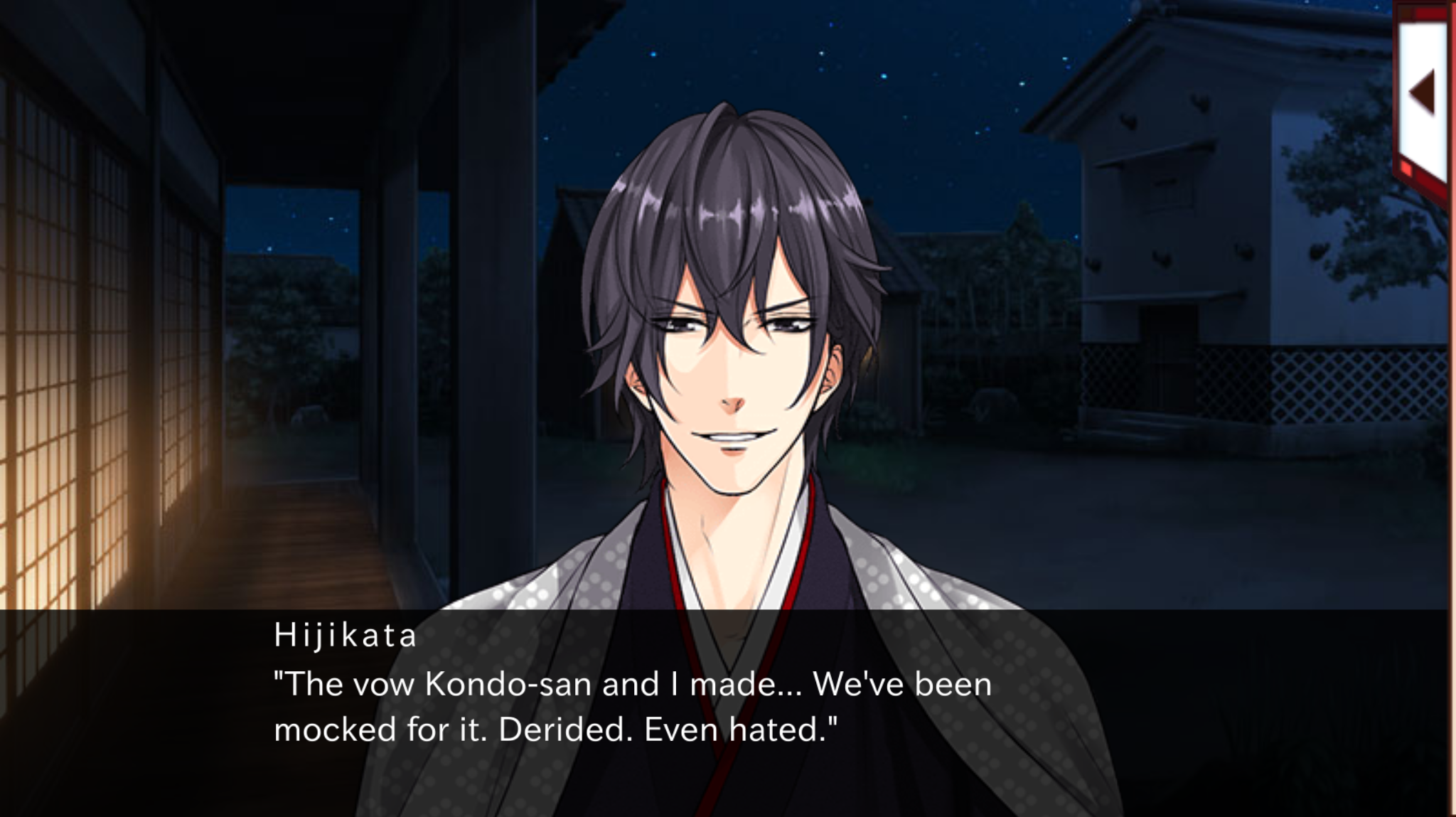 When he is injured in battle he hides his injuries instead opting to treat himself or indulge in his family’s special cure-all medicine. He understands that he is the standard that his men strive for and he works hard to protect that image at all cost.  He is a very proud man, but, he is not one to let hard work go unnoticed, like when he has Soji give the MC an expensive sweet as a reward for completing her recon mission. Or the way he complements her for standing up to him, feat that required a rather large set of gonads on her part, I might add. He is not altogether cruel, displaying some genuine moments of kindness throughout the course of the story. He is just a man with some very strong convictions and he refuses to let anything get in the way of his dreams. When Hijikata does open up, he reveals a much softer, vulnerable side. He has not lived an easy life and I appreciated the fact that he felt comfortable enough with the MC to reveal his past to her. As a warrior he walks a difficult and dangerous path, but with the support of the MC and his men, he is able to brave any storm with his head held high.

A fondness for strong-hearted women 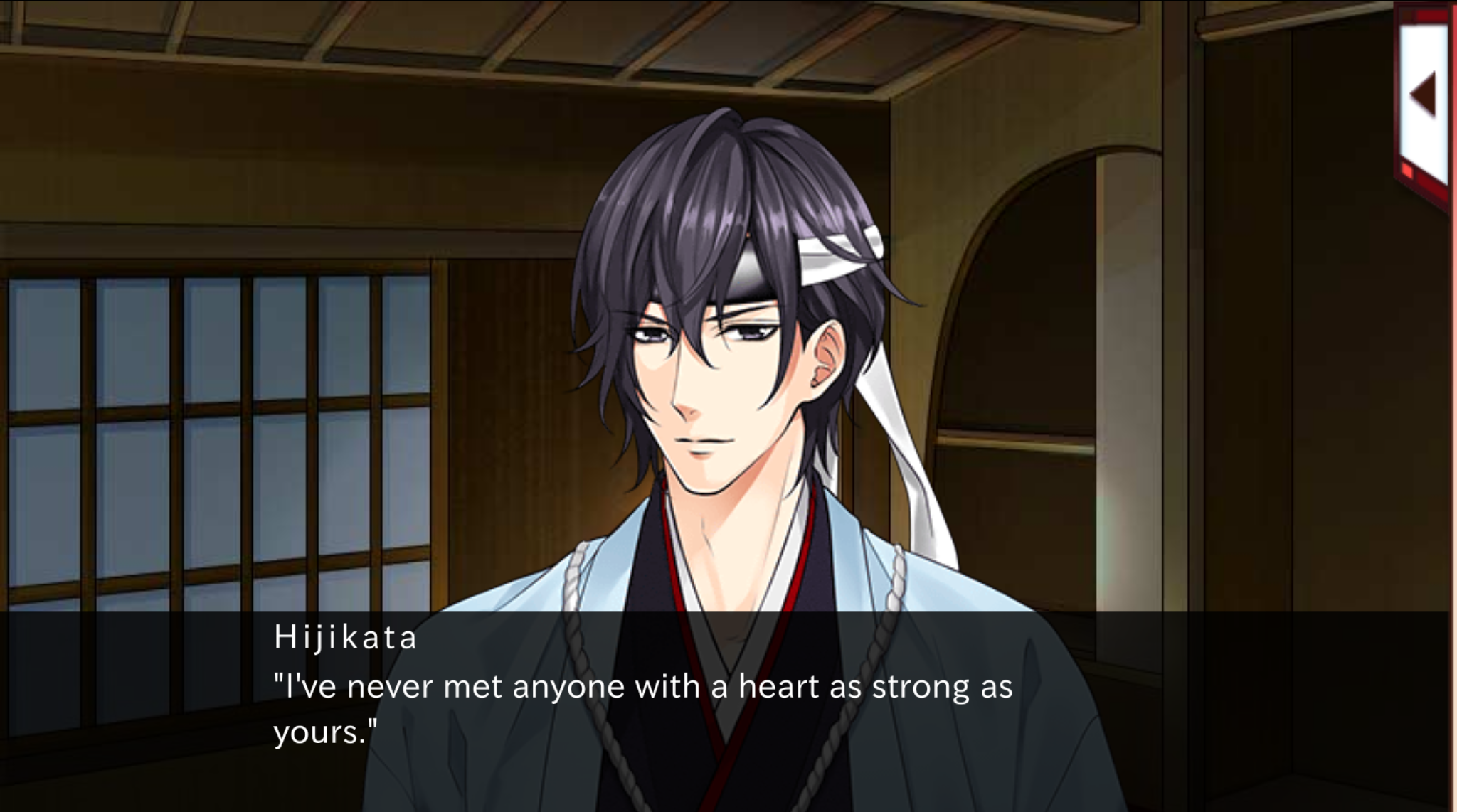 First I want to commend Voltage for giving us an MC that has a skill other than cooking and eating! The MC in this game is the daughter of a local physician, but that’s not all, she’s even trained to practice medicine as well! At the start of the story, her father has since passed on, and instead of becoming destitute or trying to marry a man for protection, she takes over her father’s practice and continues treating patients in his stead. I can’t tell you how happy this makes me to have an MC that can take care of herself on her own, it really does my heart good! 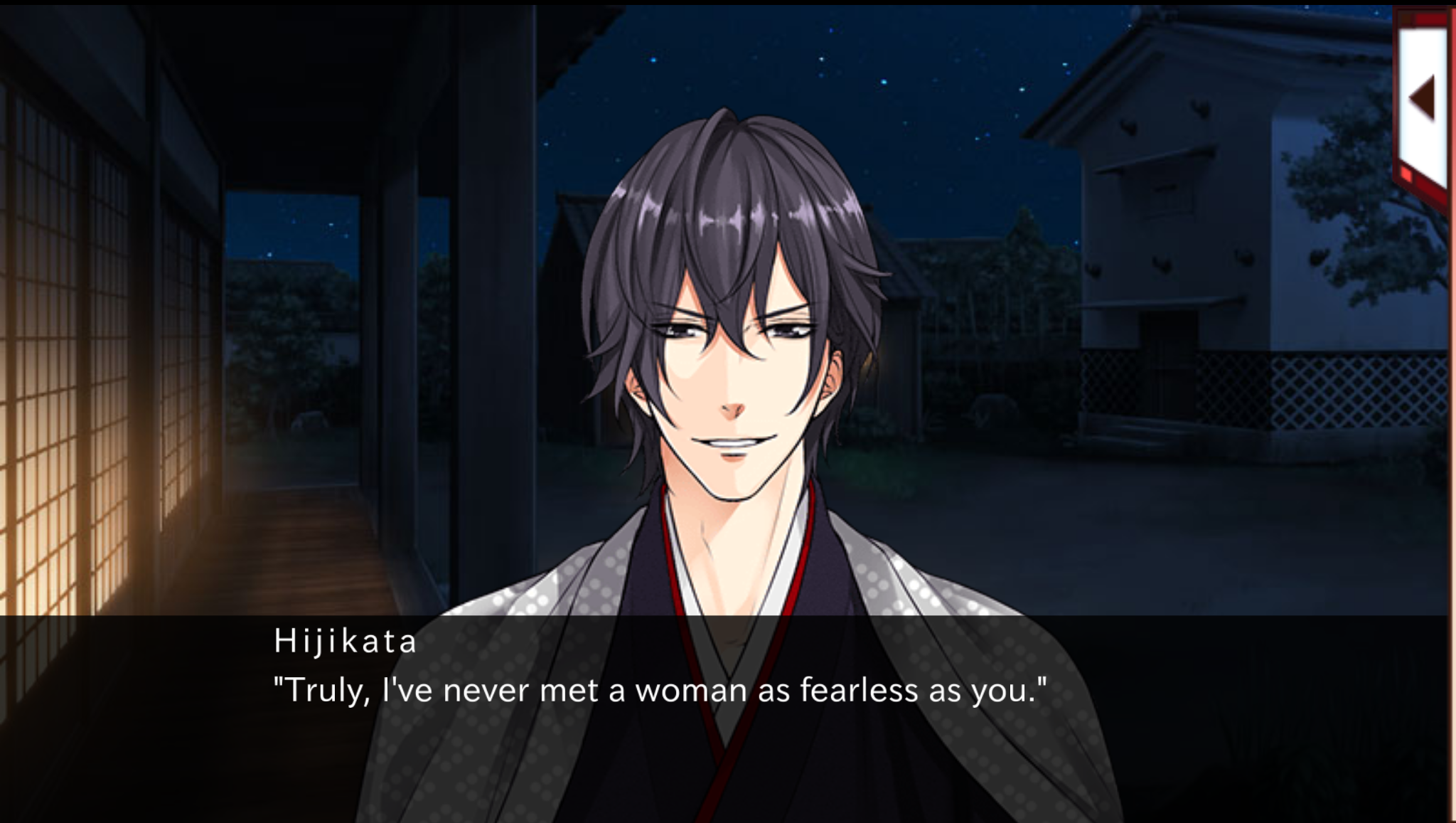 Then on top of that, despite living among the Shinsengumi and fearing for her life, she manages to stand her ground against Hijikata, one of the organizations most feared commanders! Sure she has moments of weakness, but who could blame her? The poor girl is held hostage by ronin, watches her house and everything she owns burn to the ground, and then gets whisked off by a band of ruthless samurai all within the span of a few hours… I think she is allowed to have some moments of fear and despair, it’s a human response. The one thing I did not like was how quickly she fell for Shin, I get it when your only other option is a demon commander, you kind of want to latch on the first hot guy to show you kindness. I’m just upset that the silly girl immediately assumes she’s in love with the guy, at the very least it wasn’t more than a crush…Aside from that I was impressed by the way she handled herself, she was even willing to die for the Shinsengumi cause which I loved! This MC was a total badass!

Yes…and no…This isn’t really a romance… I know that sounds weird given this is a romance game, but hear me out… This route is more of an ode to the Shinsengumi; their convictions, their struggles, and their devotion to a single cause: peace. If anything, this route would have been just as good without any romance. This story was more about falling in love with the Shinsengumi and by extension Hijikata himself, because in my mind Hijikata and Shinsengumi are synonymous with one another. They are so tightly coiled that it is difficult to imagine one without the other… The romance aspect of the route seemed forced, I just had a hard time imagining Hijikata in love with anything other than the Shinsengumi…

So, if you’re looking for flowers and rainbows, Hijikata is not for you, in fact he’s a cold-hearted bastard for the majority of the route. Hell, he’s barely even in the damn route for the first half of the game, I found that I spent more time with Kondo and Soji than I did with Hijikata. I was starting to have flashbacks to Shin’s route from Amnesia: Memories but, I stuck with it. The progression of the route was a little frustrating, Hijikata is not a man that expresses love in over the top gestures, he is very subtle, at time his version of loving someone seems an awful lot like plain old respect. I just didn’t feel the love between Hijikata and the MC. Maybe if Voltage had done something similar to what they did in Her Love in the Force and created two separate main stories, one for getting to know Hijikata and the other for romancing Hijikata, then maybe the romance would have gone over better for me. I just needed more time…

There are two endings available in Era of Samurai: Code of Love: Written by Fate and Written by Love. In the Written in Love Ending, the ronin are defeated (Ikedaya Incident) and the town’s opinion of the Shinsengumi becomes more positive. After resting in town for the night the Shinsengumi return to the compound for some much needed celebration. Slipping away from the festivities, Hijikata and the MC share a passionate moment alone bathed in moonlight. In the Written in Fate Ending the townspeople turn on the Shinsengumi. Now that the ronin are dead, Hijikata tries to send the MC away, but she stubbornly insists on staying by his side. The game ends with an emotionally charged and bittersweet romantic moment between the MC and Hijikata. I prefer the Written in Love ending hands down, moonlight vows and a haiku for the win!!

In the end, this was a very solid route, a great start to Era of Samurai: Code of Love. While it isn’t my favorite Voltage route ever, it still did an excellent job of introducing us to the world of the Shinsengumi while taking some interesting liberties with the story. But I have some reservations in recommending it… without the forced romance this would have been a perfect route, but with it…with it Hijikata’s route is just kind of meh…

10 thoughts on “My Lover is the Demon Deputy of the Shinsengumi- Era of Samurai: Code of Love- Toshizo Hijikata”