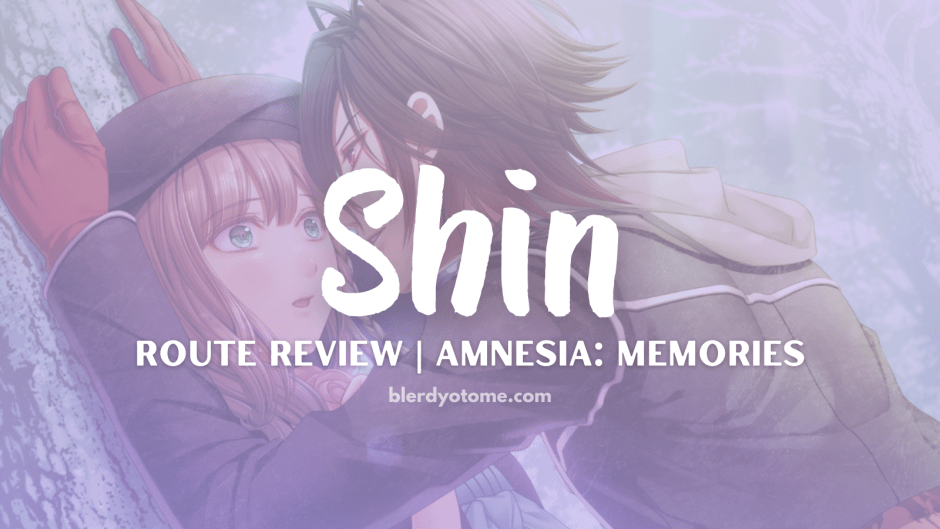 I usually don’t go for the childhood friend characters. But I really liked Shin’s character design. From the piercings to the jacket, everything about him seemed to scream bad boy. Plus he’s a bit of a tsundere, which trumps everything. I actually really enjoyed Shin’s route. It had just enough mystery and suspense to keep me reading until the very end.

I will admit that in hindsight the reveal was obvious. But, at the time it took me a while to figure out what was really going on. I had a really hard time getting the good ending in this route. The first ending I got was one of the bad endings which was a lot darker than I anticipated. It was almost too random to be believable (especially when you haven’t played any other routes). Other than that the route was pretty good. Everything lined up nicely plot-wise and Shin didn’t have a single out of character moment. All in all a solid route.

The Heart World Has an Immersive Mystery

After choosing the Heart World, the MC wake up in the hospital to Shin being a complete creep. Thinking she’s unconscious he kisses her. She (Orion) freaks out and he backs off. He then tells her that he is her childhood friend, and current boyfriend. Shin explains that she was in an accident a few weeks prior. He is extremely vague about the details surrounding the accident. But, he does fill her in on some of the minor details of her life and takes her home.

Shin returns the next day, but becomes suspicious when the MC doesn’t remember how long they’ve been dating. He calls the MC out on her lies and she admits that she can’t remember anything from before she woke up in the hospital. Worried that he’ll send her back, she begs him not to tell anyone. He reluctantly agrees and does his best to help her regain your memories. So he takes her to familiar places and reintroduces her to her friends, including Toma. It was about this time that my “Love Triangle” senses started tingling.

Toma is obviously in love with the MC. Which causes some noticeable tension between him and Shin, that persists through the route. In fact, it leads to everything bad that happens in Shin’s route. Further reinforcing the idea that no good can come from love triangles. They are like an infection. They lead good men to evil. Toast falls jelly side down. Babies hit tables, etc. So Toma agrees to help Shin keep the MC’s memory loss a secret as well. He even lets it slip that the MC actually proposed to him when they were children. But we see how that turned out in his own route.

As days go by the MC slowly regains some of her memories surrounding the accident. But problems arise when she regains a memory that contradicts what Shin said happened the night of the accident. She recovers a memory of Shin finding her after the fall. But everyone else insists that Shin wasn’t the person to find her that day. Suspicious and unsure who to trust, the MC begins investigating the events surrounding the accident; enter Ikki, Ukyo, and Kent. They confirm that Shin stayed behind and was most definitely not the person who found her after the accident. Matters only get worse when the police find evidence that suggests foul play.

Shin Finds Himself Under Suspicion

They suspect that Shin may have caused her accident and drag him back to the police station for questioning. However, without her memories she is unable confirm whether Shin is really responsible for her accident or not. To be honest, I had a really hard time trusting Shin. He constantly lies or omits the truth in order to test/protect the MC. While his intentions are good his tactics just make him seem even more suspicious. Up until the end I actually thought he’d pushed the MC off that cliff. His personality doesn’t help much either, he is distant and keeps his thoughts and feelings to himself. He also has to contend with the negative stigma associated with his father’s crime. But, despite the mounting suspicions of their friends and the police. Shin manages to maintain a cool and level head through the entire route.

He never blames anyone, nor does he ever lash out at the MC, I really like how mature he is. At times it’s hard to forget that he is just a high school student.  Shin is very intelligent, possessing deductive skills on par with the likes of Kent. He manages to deduce that Toma is the person who hurt the MC. All while attending cram school and trying to clear his name. I was surprised at the level of planning he did throughout the route. Shin always manages to stay two steps ahead of everyone else.

The relationship between the MC and Shin is extremely cute. He is not one to sugar coat anything, especially with the MC. He is blunt, not afraid to hurt people’s feelings by telling them the truth. In fact he actually tells the MC that she sucks at singing, which motivates her to practice more. In time she gets better and her beautiful singing makes him fall head over heels in love. Motivated by love he attempts to learn bass, so he can join her band when he graduates. Shin then confesses unable to spend another day as just a childhood friend. He then spent three months building a romantic relationship with her, so a little thing like amnesia isn’t going to stand in the way of him getting his girl.

Shin is very patient with her. But, his frustration at her not remembering him and his intense feelings for her tend to drive him to act impulsively. He finally managed to become a victorious childhood friend, and there is no way he’s going back to just being a childhood friend again. He tries to be understanding of her condition, but his hormones have other plans. Despite his tsundere-ness he is very affectionate with the MC. So there are loads of surprise kisses and intimate moments. Deep down he is a very passionate guy, if only in front of the girl he likes. Even after the conflict is resolved Shin, stays the same, if not a little nicer to the MC.

Do I Recommend Shin’s Route?

There were definitely some good moments in this route, I loved Shin’s overall characterization. His cold and distant personality hides a very sweet compassionate soul. But don’t expect roses and chocolates, that’s just not his style. Though, he will protect you no matter what. The lengths that he goes to for those that he cares about is commendable. The fact that he forgives Toma even after all that he did says a lot about his character and his loyalty.

The mystery and the suspense aspects of the game were well done. The ongoing mystery was the main reason I kept reading. I just had to know whether or not the MC’s accident was really an accident. The characters were all interesting and engaging, so much so that I found my self empathizing with them. I was actually surprised by the conclusion of the story. But then again I tend to get so caught up in the story that I miss obvious details. I even felt sorry for Toma in this route. The poor guy watched as the girl he loved was snatched away by someone else not once, but twice. Not even amnesia could help him win the girl in the end. I mean that’s enough to drive anyone a little mad.

The MC, ugh, what a disappointment. I know that the MC is supposed to be a stand in for the reader. But, a completely silent MC sucks. Orion is cute and all, but it would have been nice to at least get some of the MC’s thoughts. A lot of the time I felt like Shin was talking to himself and that the MC was just a figment of his imagination.

Of the endings available, the Good and Normal Endings are the best. Both showcase the growth that both the MC and Shin have gone through over the course of the route. The bad ends are bad. By bad I mean the MC dies. Though the “May you dream forever” ending is more believable than the “I’m not the culprit” ending. Which came completely out of left field.

I know it seems like I had a lot of complaints. But I really did like this route. I recommend Shin, sure he’s a meanie sometimes, but not once did I ever doubt his devotion towards the MC.