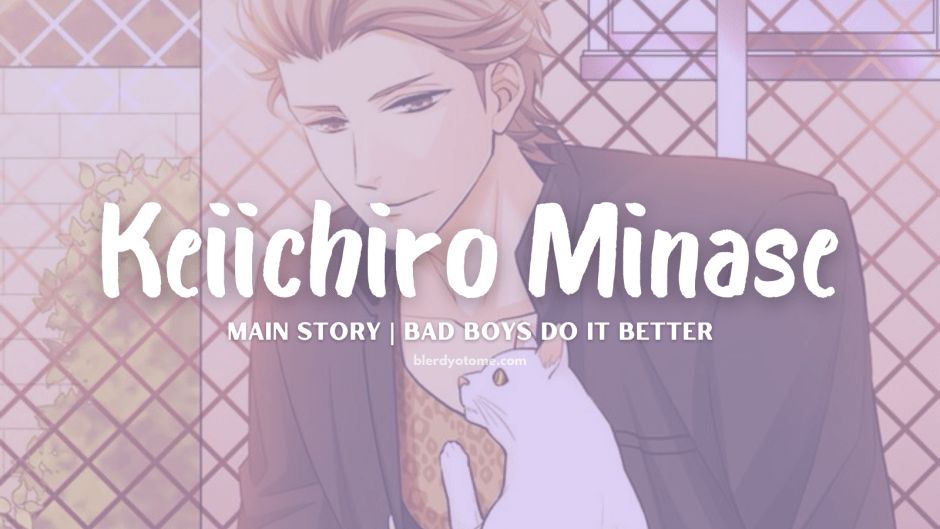 Bad Boys Do It Better‘s Keiichiro Minase is a man of few words. But somehow he still manages to exude a softness uncommon in someone so rough looking. Just like the other love interests, Kei is a bit of a fighter. But that doesn’t mean that he’s a bad guy. Behind his manly appearance is an adorably sweet guy. He uses his strength to protect those weaker than himself and he’s always quick to help a friend in need. Gentle giant, Kei more than met my expectations in this route and I’m sure that this silent delinquent will sweep you off of your feet.

Thoughts on Keiichiro: He’s not as scary as he looks

After the power is restored the MC realizes that Keiichiro has his arm draped over her shoulder. When she confronts him about it, he claims that he tripped in the dark and landed that way. Because he looks like such a dependable person, she believes him.

His scary appearance and quiet demeanor frighten the MC at first. But in time she learns that he is much kinder than his looks would suggest. When compared with the other boys from the dorm, Kei seems much more calm and reserved. And the MC, finds herself drawn to his masculine charm. But, the MC’s dream of a sweet high school romance are dashed when she learns that there is a girl Kei has a crush on. What’s a girl to do when the guy you like likes someone else?

Unlike the other routes where the romance takes time to blossom, the MC falls for Kei fairly quickly. While she doesn’t outright state that she loves him, she does make it pretty obvious. I mean what high school girl wouldn’t fall for Kei. In a sea of immature boys he’s the only thing close to a man. Not only is he perfect male specimen, with his broad shoulders and masculine face. But he also possesses a maturity the other guys could never dream of attaining.

Kei serves as a source of support for the MC as she adjusts to life at an all-boys school. It’s the little things he does, that makes her life easier. Like giving the MC a ride to school on his motorcycle, or encouraging her when she’s down.

He may be a bit on the quiet side, but the words he does say he means. He isn’t one to lie or do anything to intentionally hurt anyone. And the other guys look up to him as a bit of a role model. He is the voice of reason in the group, smoothing over most conflicts with a few carefully chosen words. When that doesn’t work he’s a more than capable fighter. Because of his fighting prowess, he attracts the attention of rival school thugs, who constantly drag him into fights and cause him to miss school.

Despite this, Kei manages to be the top student in his class. He even helps Rei keep up with his school work when he misses class (which is often). Kei is also a very sensitive guy, who loves cats and cries during sad movies. Voltage describes Kei as a guy that hates women. But that couldn’t be further from the truth. Kei doesn’t really hate women, it’s more like he doesn’t know how to deal with them. But for someone who doesn’t know how to act around women, he does a pretty good job at it.

I was so enamored with Kei and his development in this route, that I forgot that there was even a conflict in this route. The central conflict of the route revolves around the MC’s growing affections for Kei, despite knowing that he’s in love with another girl. I usually find misunderstandings like this extremely annoying. But with the way Kei is as a character, it makes sense.

The whole situation is something that could have easily have been cleared up by Kei. But, there wouldn’t have been much a story if he’d done that now would there? Kei’s the type of guy to take burdens on alone, quietly bearing with any obstacles that come his way. His refusal to rely on others leads to some tense situations during the route. But once he opens up to the MC, he learns that it’s okay to share his feelings with another person.

Thoughts on the MC: From the first time I saw her

Kei isn’t the most expressive guy. I feel like Kei would be put off by an overly pushy woman. I found her open and friendly personality refreshing and to be honest that’s all that I have to say about her. She doesn’t really do anything outstanding in this route other than provide support for Kei as he figures out what he wants to do with his life.

I’m sorry, but I think this is the first time I’ve ever been jealous of an MC. This girl hit the frickin’ jackpot! This route was one punch in the gut after another, and I loved every minute of it. This route was everything I could have hoped for and more. When Kei falls for the MC he becomes much more affectionate and open. His poker face softens revealing his true feelings. He also becomes much more bold and passionate than I could have ever dreamed he could be!

Do I Recommend Keiichiro’s Route?

The overall story did a great job of showcasing Kei’s development as a character. I love the way the Akane situation is handled. It’s resolved simply and there are no lasting hard feelings between Akane and the MC. Which probably made the whole “love triangle” thing go over so well for me. That and the fact that it wasn’t the main focus of the plot. Voltage presented some interesting plot points, but sadly most of them fell flat. I would have liked to have seen them developed a little more fully, but not every story is perfect.

I don’t know if this review can truly capture just how much I loved this route! Kei is such a complex and subtle character, which makes him really hard to write about. It was the little things about him that won me over. In the end I highly recommend this route. It may not be as dramatic as the other routes in the game. But it doesn’t have to be. The small subtleties of the route are enough to allow this big softie to stumble into your heart.

There are two endings for this route, the Teenage Dreams Ending and the After Class Romance Ending. In the After School Romance, after the Akane issue is handled, Kei takes the MC to a secluded riverbed to confess. A few days later they pay Toshirou a visit and share a tender moment alone together. In the Teenage Dreams Ending, Kei and the MC take a romantic trip to the ocean on his motorcycle, and Keishares his past with the MC. Hands down, the Teenage Dreams ending is the better of the two, that is an ending done right!

5 thoughts on “Bad Boys Do It Better | Keiichiro Minase Review: The Manly Delinquent Who Stole My Heart”