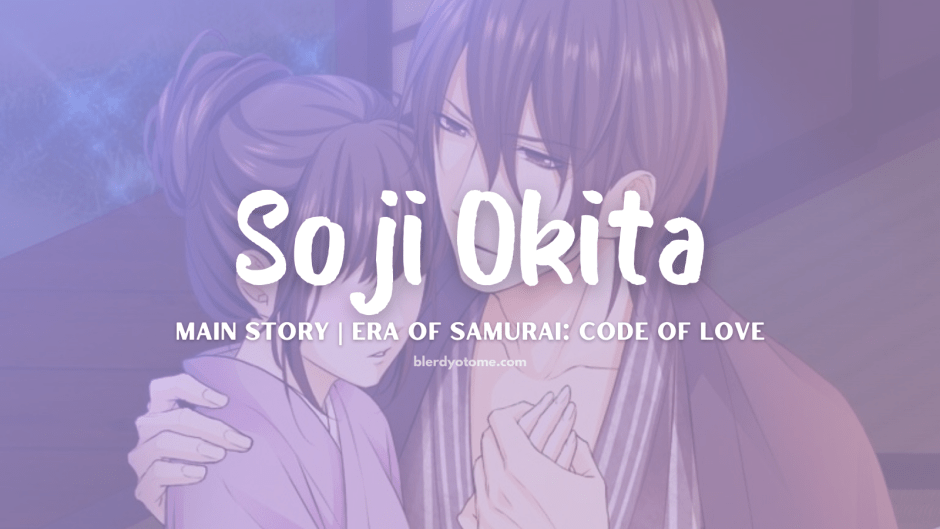 When I first saw Soji Okita in Era of Samurai: Code of Love, he scared me a bit. He just looks like someone who’d kills indiscriminately, but after playing Hijikata’s route my opinion changed. He seemed like a genuinely okay, if not a little too playful, guy. So, when Voltage released his story earlier than expected I decided to buy it.

I take it back, I take back all of the cruel things I said about this guy. Okita was a much better character than I originally anticipated. I loved Soji in Hakuoki so I was expecting Voltage’s version to pale in comparison. But, what I got was a heartbreakingly sweet portrayal of a very tragic character. There is definitely more to this cold swordsman than his reputation would have you believe.

Thoughts on Soji Okita: A blade heavy with life

As the infamous wolf of the Shinsengumi, Soji Okita’s mastery of the sword is second to none– making him a valuable asset to the Shinsengumi and their cause. But, his skill with the blade has earned him a reputation as a bloodthirsty and vicious man. His name synonymous with unrestrained brutality. In town rumors fly about his savagery with the sword and his lust for killing.

Even among the Shinsengumi, Okita’s reckless abandon in battle has earned him a reputation as a savage swordsman. He is even rumored to be behind a series of brutal murders happening in the capital. But despite his reputation, there is more to this Okita than meets the eye. Beneath his fearsome appearance is a man weighed down by the weight of the human lives cut down by his sword. Okita is a much more tragic character than I originally anticipated, and I found myself captivated by this wicked man.

As a child, Okita’s father was married by a wandering ronin, leaving his family destitute. In order to make a name for himself, he became a disciple of the Kondo family dojo. Over the years he showed an aptitude for the sword. So when Kondo went off to start the Shinsengumi, he brought Okita along with him. Okita’s skill proved to be an asset to the fledgling peacekeepers. Fighting and killing gave Okita’s life purpose. But word spread of the of his lack of restraint and people began to fear him.

Even the men of the Shinsengumi note that Okita is a different person when he wields a sword. But his skill as a warrior extends beyond the use of a sword. Okita is highly perceptive. He is able to sniff out deceitful people with 99% accuracy. At the start of the route, he even accuses the MC of being a spy. Even holding her at knife point in order to coax out a confession. On the surface Okita appears to have no reservations when taking a human life. But deep down he struggles to cope with the knowledge that he is responsible for so much death. In an effort to protect what’s important to him, Okita became the very thing he hated: a murderer.

Of all of the Shinsengumi commanders, Okita is the one with the greatest respect for life. Because he knows the true cost of killing having experienced loss at such a young age. He knows the pain that comes from losing someone and it is with a heavy heart that wields his sword. Each life taken by his hand is another father, brother, or son, that will never see his family again. With every swing of the sword he ensures that another child will grow up the way he did, and yet he manages to stick to his convictions.

But, when he isn’t wielding a sword, Okita reveals a much softer more approachable side, he is much sweeter than his reputation would suggest.  In reality, Okita is a very social person, earning him good rapport with the townspeople, especially the children. He is quick to laugh, and takes joy in teasing the MC and even the Demon Deputy himself, with whom he shares an almost brotherly relationship.

When Okita falls for the MC he becomes a lot softer. His threats don’t hold nearly as much bite as they once did, instead resembling something more akin to light teasing. He even gets jealous of the gifts the other men give her for helping out around base, so he takes her out on a date to town. I was surprised at how genuinely sweet and thoughtful Okita was while playing this route. With his messy room and pet fish, he seemed much more human and less like the merciless killer swordsman of the Shinsengumi people think he is. When he realizes the MC’s feelings for him he starts to push her away, in order to give her a chance at a normal life. Okita gave up on living a peaceful life long ago, so he doesn’t want to drag the MC into the darkness with him.

Thoughts on the MC: Let’s walk this path together

The MC in Soji’s route gave me a good chuckle. At first she is stiff and fearful of Okita. Which given his reputation is warranted. But once she gets to know him she dishes just as good as she gets. Her snarky quips and remarks had me rolling. And don’t get me started on her internal dialogue–pure gold. Like I mentioned in Hijikata’s review, the MC in this route handles everything surprisingly well for someone in her position.

She doesn’t spend her time crying or bemoaning her lot in life. Instead she keeps pushing forward with her head held high. The MC is rightfully terrified of the Shinsengumi. But that doesn’t stop her from doing her job as First Aid Officer. She pulls her weight, handling every task given to her, more than exceeding the expectations of each and every man at the compound. At one point in the story the Commanders of the Shinsengumi all lavish her with gifts in thanks for her service, showing her that she has more than earning her place among these elite warriors.

I will admit that at first the MC is as innocent and pure as a newborn lamb, which Okita takes to teasing her about. Unlike Okita and the other Shinsengumi, she lived a relatively normal and tragedy free life (excluding her house burning down) so to them her outlook on life is overly optimistic. She believes that all life is precious and that the taking of life for any reason is wrong, putting her at odds with practiced killer, Okita.

There are several times in the story where she tries to convince Okita to give up killing. But as the plot progresses she comes to realize that not everything is as black and white as she once believed. Sure she’s a little reckless, and sure she has some less than stellar moments, but by the end of the route the MC is more than willing to lay her life down for the Shinsengumi cause.

Do I Recommend Soji Okita’s Route

Now that’s what I’m talking about, that’s how you write a Shinsengumi romance story Voltage! This route was a vast improvement on what we got during Hijikata’s route. Soji’s route in Era of Samurai is much more character driven. By the end I really felt like I got an intimate look at Soji Okita the man. From a young age he experienced the worst the world had to offer, so he dealt with it the best way he knew how. Okita internalizes his trauma. Leading  him to become the very thing he hated. It’s only after he meets the MC that he learns what it means to truly live.

There are two endings available for Soji in Era of Samurai: Code of Love: Written by Fate and Written by Love. In the Written in Love Ending, unlike in Hijikata’s route, the MC experiences the carnage of the Ikedaya Incident first hand. After the fighting is done, Okita coughs. Most of you know what that means. My heart can’t, NO! In the Written in Fate Ending, after Okita and the Shinsengumi kill all of the ronin at Ikeda-ya, Soji and the MC slip away to a secluded hilltop and confess their feelings for one another. I prefer the Written in Fate ending hands down, because… it’s easier on my heart…

Voltage really outdid themselves with this route and for once I have no complaints! Because Voltage took the time to explain his past, I was better able to understand his present motivations and actions. Overall, this route was a roller coaster ride of emotions, one punch in the feels after another! I laughed, I raged, I felt those little butterflies in my gut, and this is only the beginning! I fell hard for this guy and you know what, I feel like Voltage is setting me up for the ultimate heartbreak in the future… I highly recommend this route! Go play Soji Okita’s route in Era of Samurai Code of Love, now.

7 thoughts on “Era of Samurai: Code of Love | Soji Okita Review – My Lover is the Master Swordsman of the Shinsengumi”