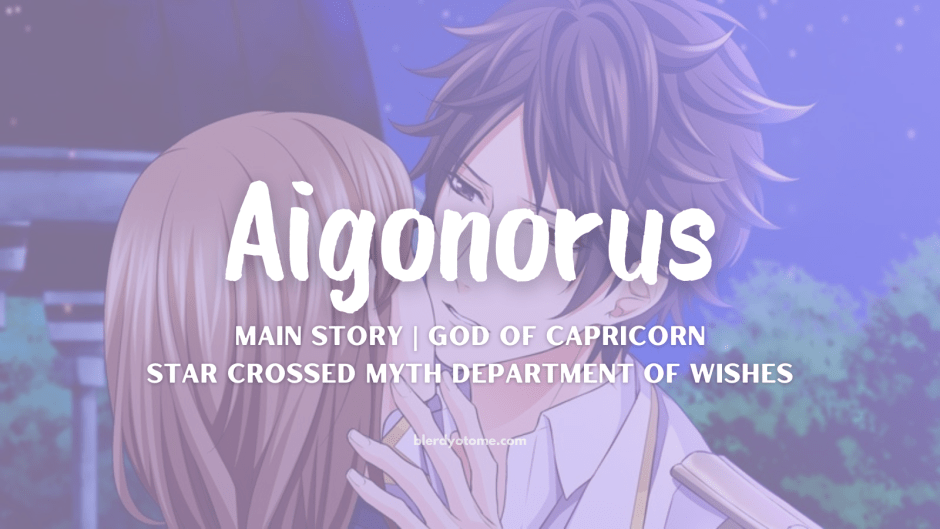 Thoughts on Aigonorus: I was so afraid of getting hurt

After the MC is attacked by the King of the Under Realm, the King of the Heavens sends six new gods to Earth for her protection. But, the MC has trouble deciding which god will be her personal bodyguard. So they all start vying for her attention. Overwhelmed by the attention, she goes with the only god not trying to seduce her, Aigonorus. Of course, the minute his name leaves her lips the other 11 gods question her sanity.

Aigonorus is extremely indifferent about everything, and I mean everything, especially his duties as a god. When he does grant wishes, he is very literal about it. At one point in the route he grants the wish of a woman overwhelmed by her one-sided love. Instead of taking the time to consider her feelings. He opts to remove her feelings of love completely, much to the disgust of the MC.

On the surface his actions seem cold and detached. But in reality he is more familiar with her situation than anyone knows. Prior to the story he too experienced a painful one-sided love. Burned by the experience, Aigonorus vowed to never leave himself open to that kind of pain again.

In addition to his normal divine abilities, Aigonorus possesses the ability to communicate with animals and control their minds. So when tasked with protecting the MC, he delegates his duties to his specially trained goat heralds. However, the heralds fail to protect her from the King of the Under Realm’s henchmen. It’s his callousness with her that leads the King of the Heavens to brand him with a mark of sin.

For his oversight, Aigonorus is punished by the King of the Heavens. If he moves more than 3 meters from the MC, he’ll receive a shock. The King also proclaims that until Aigonorus is willing to take his guard duties seriously, he and the MC must remain in the heavens. At first their forced closeness creates problems for the MC, who finds Aigonorus’s indifference frustrating. He seems unconcerned with having to spend every hour of the day with the MC. Thinking nothing of sleeping in the same bed as her or bathing together in the open communal bath.

In fact he doesn’t seem to see the MC as a woman at all. But the more they send time together, the more they begin to fall into a comfortable routine. I’d be lying if I said this route was without flaws. For the first half of the route, I was blindly clicking away at my iPad. This route is extremely slow, I mean ridiculously slow. It didn’t really pick up until chapter seven, when Aigonorus shares some insight into his past. He starts to let his guard sown around the MC. Revealing secrets, like his love of soft, fluffy things.

It isn’t until he shares his past with her that they make any real progress. Aigonorous becomes much more open with the MC, showing interest in her life on Earth. Even asking her about her life and offering to explore the city with her. Aigonorus becomes much more protective of the MC opting to keep her close to him at all times, even at the expense of his own life.

Thoughts on the MC: I want to protect you

So, the MC, had her work cut out for her this time. Aigonorus is not an easy man to fall in love with. I want to commend her for not being a sadist and using the 3 meter rule to constantly shock Aigonorus. His lazy way of doing everything would have driven me crazy. But the MC in this route never loses her cool. Like every other Voltage MC since the dawn of time, she is very patient and understanding of her damaged love interest.

Lesser MCs would have judged him for his indifference, but this MC chooses to try and understand him instead. In doing so she manages to get Aigonorus to lower his defenses and open up to her. It’s her accepting personality that attracts Aigonorus to her. When things get tough, she doesn’t back down facing challenges head on. When she is cursed by the King of the Under Realm, she pushes Aigonorus away for his protection. By the end of the route the MC’s patience and understanding help her unlock Aigonorus’s closed heart.

Aigonorus is a solid character with a well written backstory and overall plot. However, it took too long for anything substantial to happen between the MC and Aigonorus! Any danger in this route is kept to a minimum, since Aigonorus and the MC spend most of their time in the Heavens. So any danger from attack by the King of the Under Realm is rendered nonexistent. It’s not like he and his evil minions are going to storm the pearly gates of the heavens and snatch her right from under the King of the Heavens’s nose.

The romantic progression between Aigonorus and the MC is so gradual that it’s maddening. Sure the MC starts to see Aigonorus for the man that he really is. But there are almost no romantic revelations from his side. The only time Aigonorus even shows any interest in anything, is when he takes the MC to see his heralds. Before that, he’s a brick wall.

However, when he does start to open up to the MC, he’s adorable! Aigonorus’s true personality shines in the second half of the game. Before that, I was really on the fence about this route. So, if you’re willing to sit through a whole lot of nothing for the first 6 or so chapters, Aigonorus’s route is worth the play through. He’s a big old softy that’s just afraid of getting hurt!

12 thoughts on “Star Crossed Myth | Aigonorus Review: My Lover is an Apathetic God”