So now that the Fans’ Choice Awards are over, Voltage has started releasing stories again and first up is the one character I have been looking forward to the most: Hajime Saito! I have been patiently awaiting this silent swordsman since the day this game was announced… I love Hajime Saito. I’m going to say something that is going to piss off the Soji Okita fans…*inhales deeply* Hajime Saito is my favorite member of the Shinsengumi!

I went into this story expecting Voltage to bring me the moon on a string and I got that and more. I didn’t think anything could be more heartbreakingly tragic than Soji Okita’s route, but I was mistaken. Hajime Saito was definitely worth the wait!

A blade to cut through the past 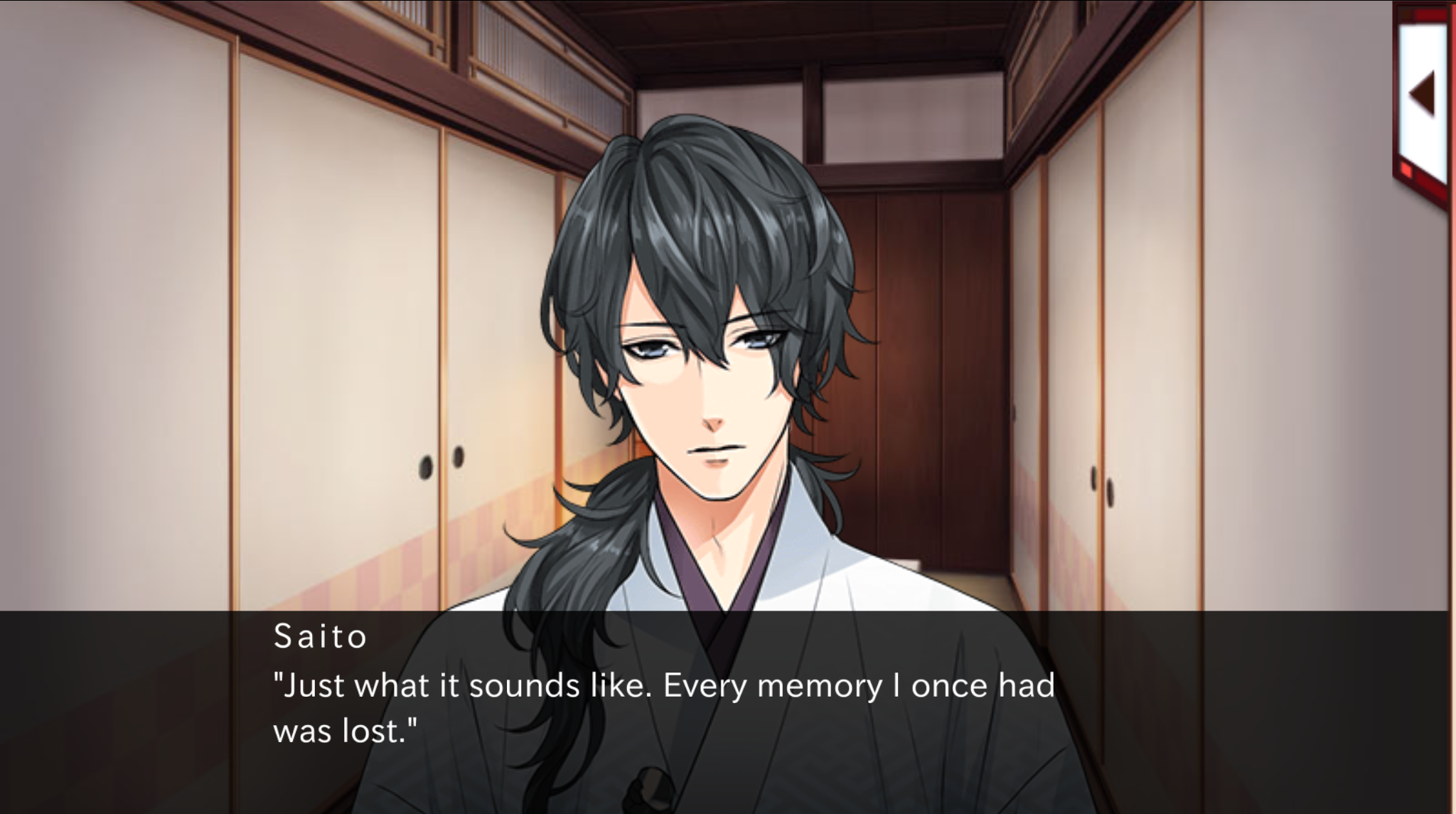 Hajime Saito is the reticent 3rd Unit Captain of the Shinsengumi. Despite his calm and reserved demeanor, Saito is a formidable fighter, whose skill with the sword is on par with the likes of Soji Okita. Unlike the other Shinsengumi officers, Saito is a relatively recent recruit. He didn’t join the Shinsengumi through the traditional channels, instead he just appeared at the Shinsengumi base one night covered in blood and wielding a sword. When questioned by the Shinsengumi, he revealed that he had amnesia and that all he could remember about himself was that his name was Hajime. So, the benevolent Kondo cleaned him up, gave him the last name of Saito, and offered him a place among the Shinsengumi and he has been with them ever since. 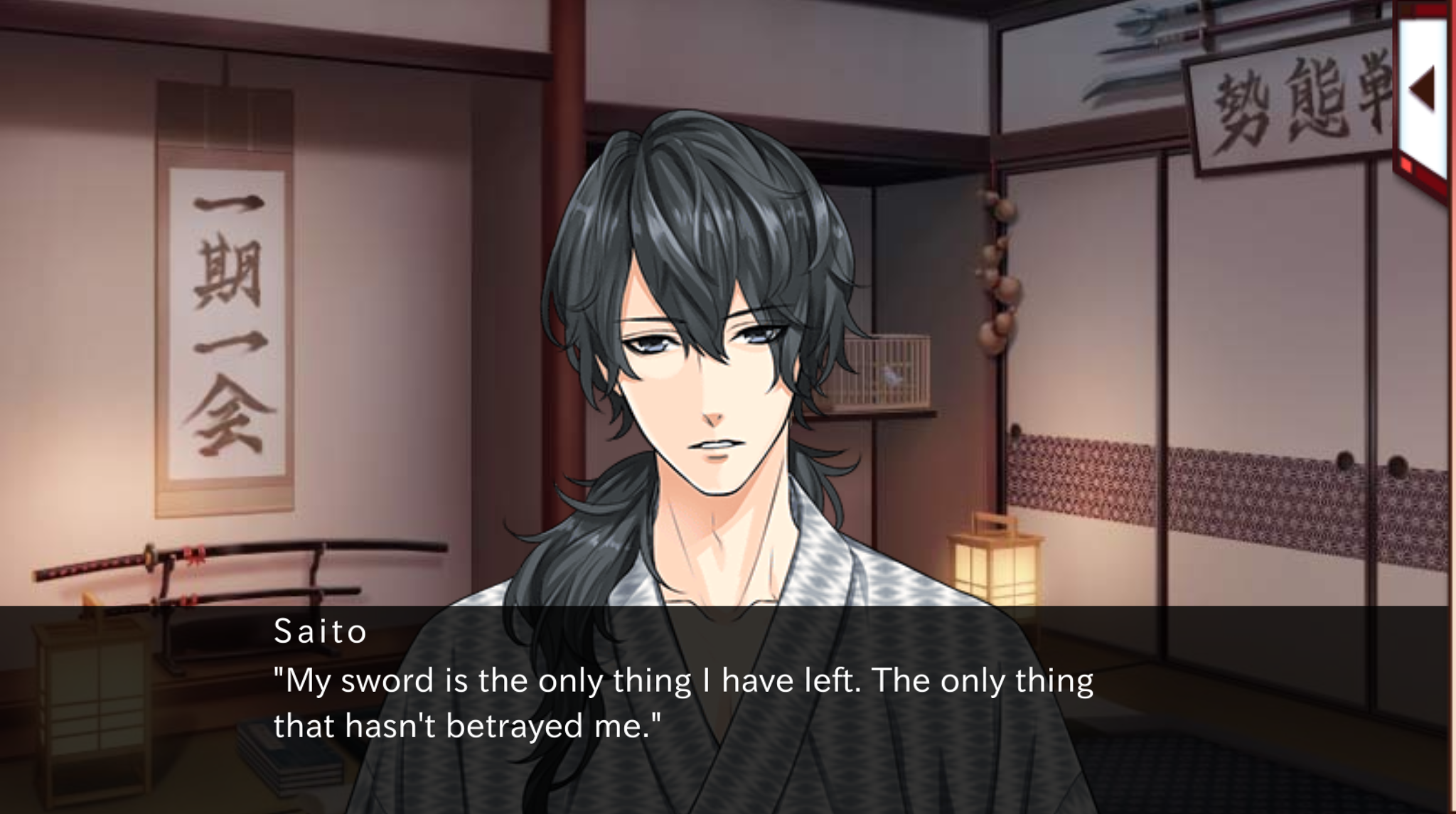 The reason behind his sudden memory loss is a mystery, but as the story progresses the MC and Saito uncover more and more of his tragic past. I thought Soji Okita’s past was tragic, but after playing this route I feel like Okita got off relatively easy… at least he had his memories. I can only imagine how confused Saito must have been wandering around with no memory of who he is or where he was from. The all consuming fear of being unable to tell friend from foe, and the only link to his past being a sword. For a man alone in a world full of enemies, a sword is a fitting companion. During that time his sword was the only thing that let him know that he was alive, it gave his life purpose. 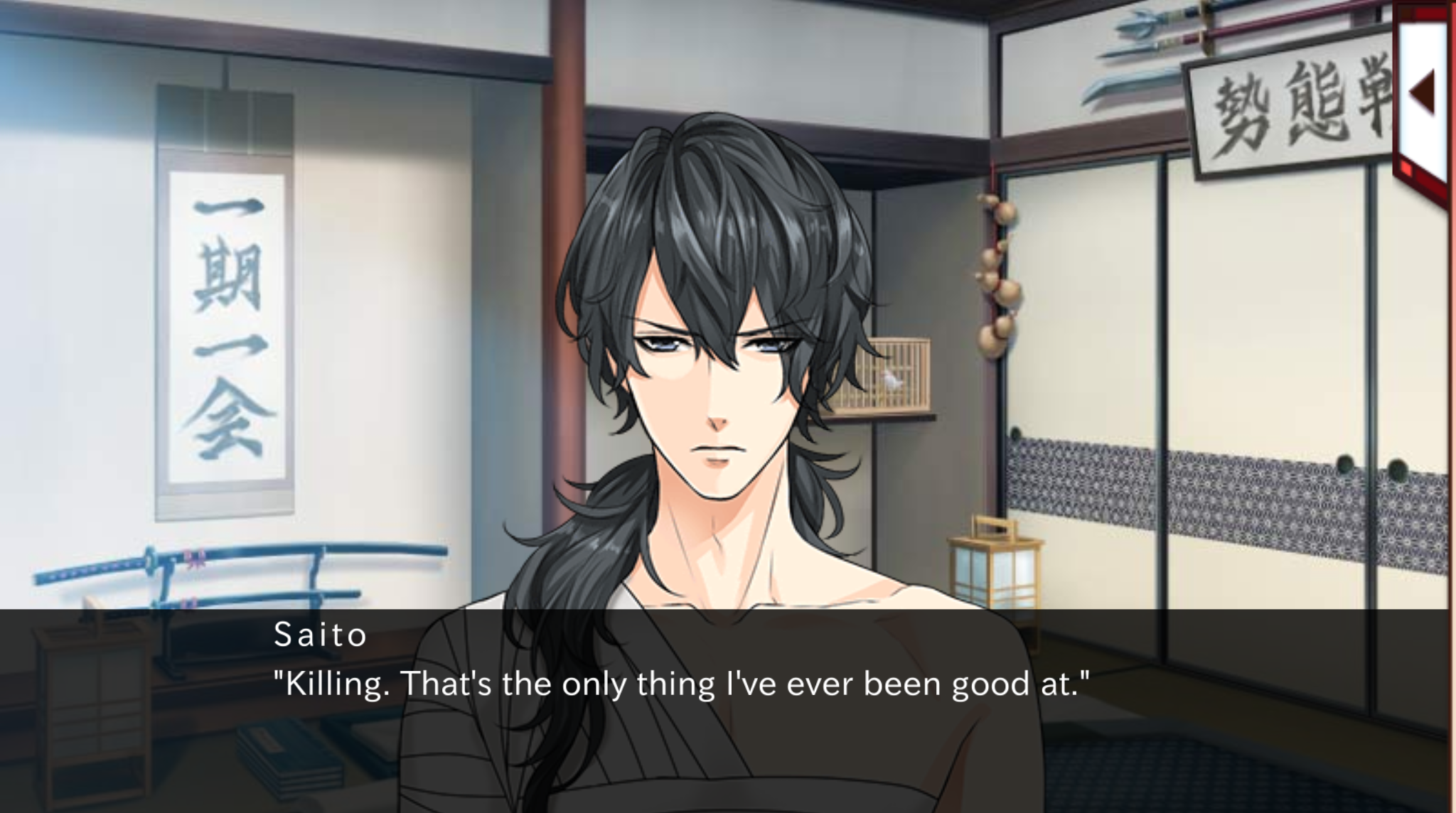 So it makes sense that he would dedicate his life to the Shinsengumi, a group of men prepared to live and die by the sword. But, Saito isn’t necessarily beholden to the same convictions as Kondo and Hijikata, his reasons for fighting alongside the Shinsengumi aren’t as noble as that. He fights so that he can live, and because he has nothing to lose he is able to fight without consequence, much the same as Okita does. But, when Saito takes a life he doesn’t feel anything, neither joy or regret, for him killing only serves to widen the gap between himself and others. Even among the Shinsengumi very few men can figure out what Saito is thinking behind his perfectly crafted poker face, save Harada and Okita. 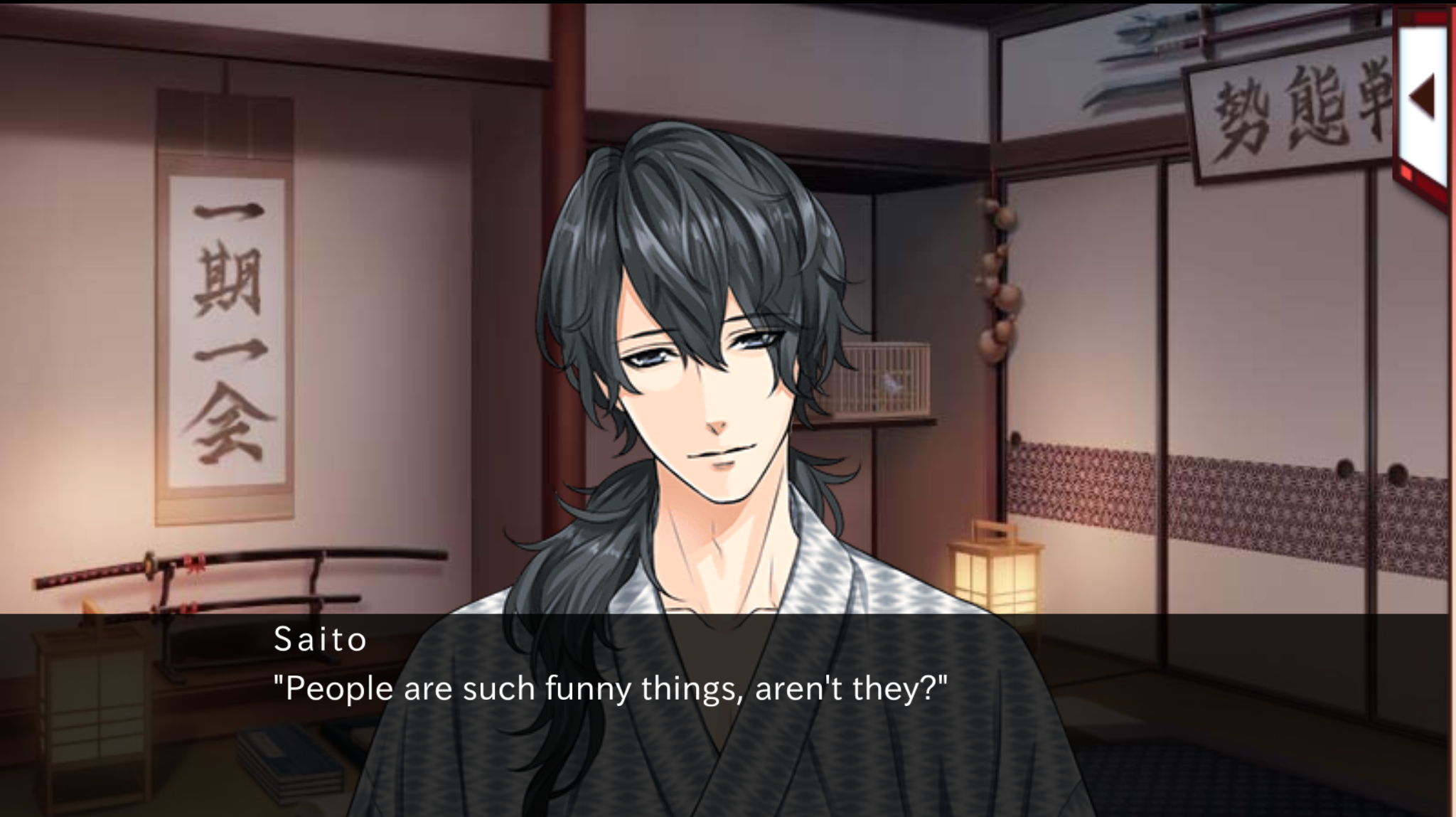 As for everyone else, Saito takes special care to keep them at a distance, but, all of that changes when Saito meets the MC. At first he is drawn to her because of their shared past losses, he can’t help but relate to her pain and in spite of himself he attempts to lessen her suffering. The more he spends time with her the more he loses his carefully constructed mask, you can almost see the weight being lifted off of his shoulders. Not only does he become more expressive and forthcoming with his feelings, but he also begins to develop a desire to live.  But, in order to live, Saito and the MC must kill the man Saito used to be.

Not all wounds are physical 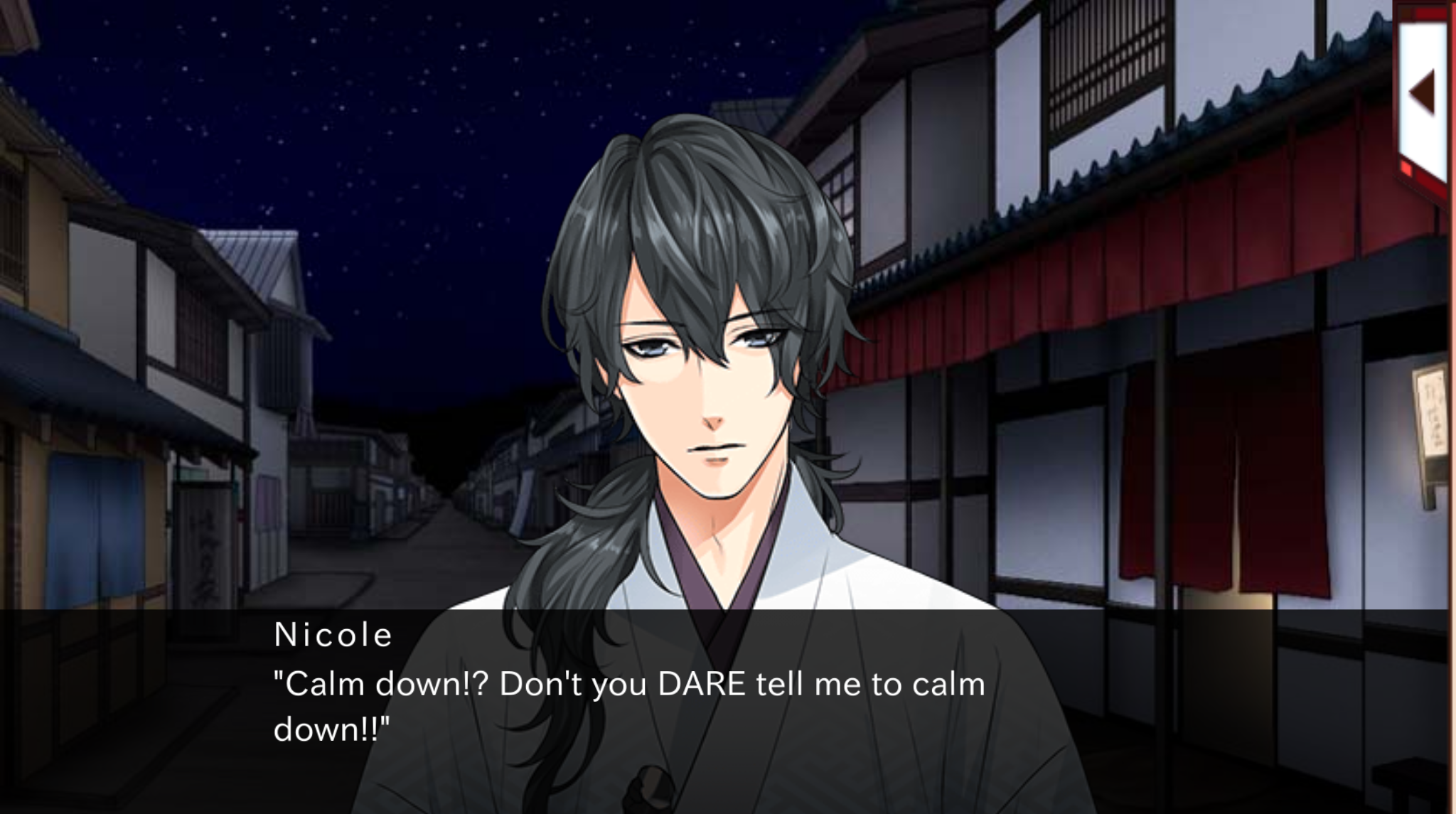 The MC in this route was much more realistic than her previous iterations, for the first time we get to experience the full scope of the MC’s loss. I know that her loss was only meant to act as a springboard for Saito’s character development, but for the first time we see the MC get upset about her own situation. And I don’t mean a few tears and we’re good, the MC in this route actually goes through something akin to depression and because she goes through it she is able to empathize with Saito rather than just sympathize. It also makes her eventual turn around that much more satisfying! 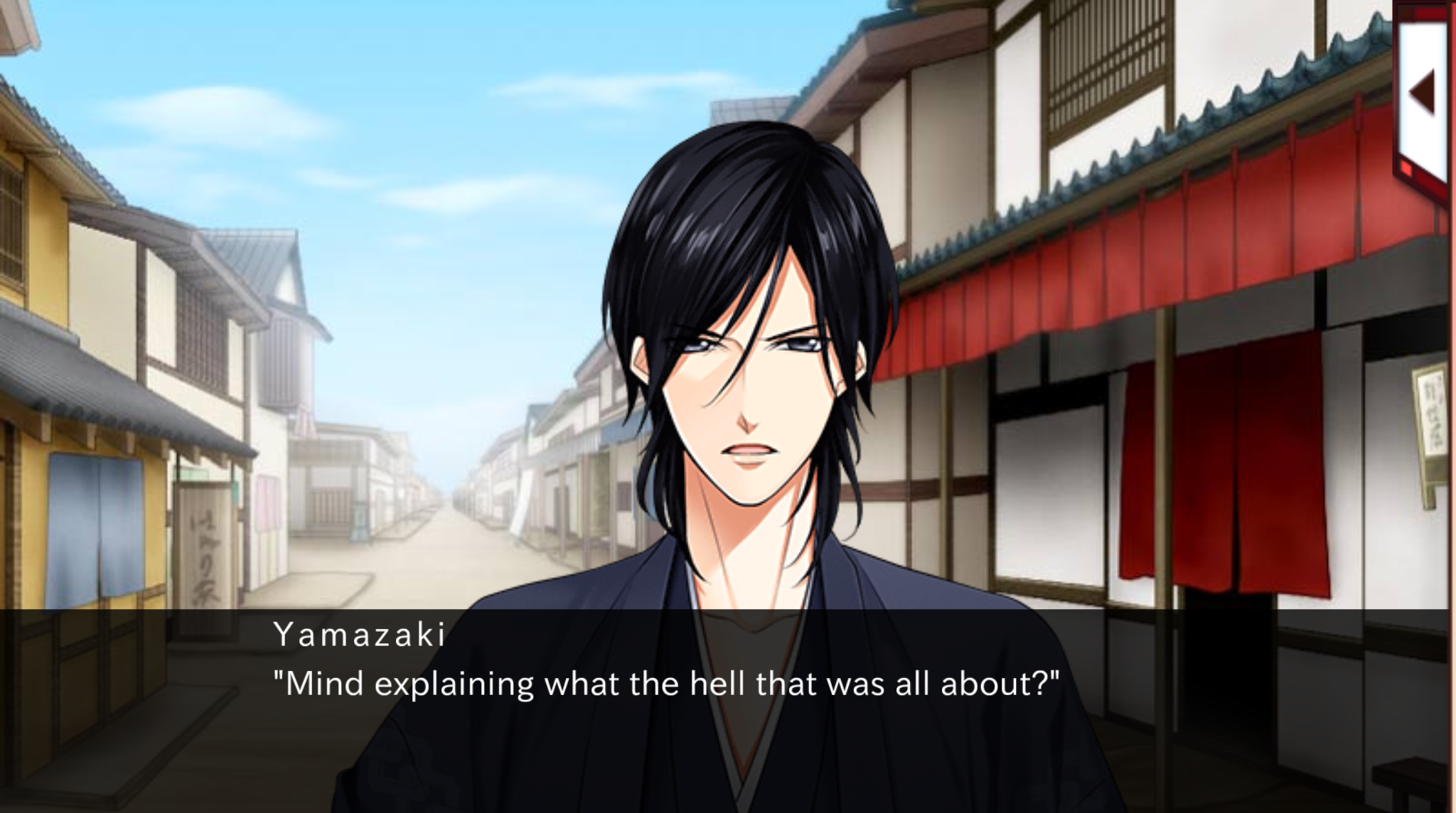 So, unlike the previous routes, Voltage decided to replace the MC’s female friend with a completely new character, a smokin’ hot doctor friend of the MC’s father. I for one welcome the change, and no it’s not just because he’s a Dr. McDreamy… not that that hurts, but because he offers a fresh outside perspective on the events of the story. The female friend, didn’t really serve a purpose other than to act as the embodiment of all the townspeople’s negative feelings towards the Shinsengumi. She’s never really given the chance to get to know the Shinsengumi the way we do, so her opinion of them doesn’t change at all. But, Dr. McSteamy does get the opportunity to live among the Shinsengumi, so his overall opinion of them does change, not by much, but it’s enough to make a difference.

I don’t know what’s going on with Voltage right now, but I hope they keep it up! The routes in this game are only getting better, I didn’t think anything could surpass Soji Okita’s route… but Hajime Saito’s route did just that! From start to finish, I loved everything about this story.

The story was well written and it did an excellent job of showing the growth of not just Saito, but of the MC as well. The situations presented were handled well and I really felt for the characters as the story began to take an bit of a dark turn towards the end. I will admit that I saw the “reveal” coming from a mile away, but it was done in such a way that it still managed to hit me right in the feels. The romance between Saito and the MC was well paced and it was nice to see the subtle changes in Saito’s personality as he began opening up to the MC. Plus his romantic scenes were just so emotionally charged and beautiful, I just couldn’t help but fall for Saito along with the MC!

There are two endings available in Era of Samurai: Code of Love: Written by Fate and Written by Love. In the Written in Fate Ending, after defeating Okada, Saito asks the MC to kill him and end his suffering… In the Written in Love Ending, after all of the fighting is done Saito and the MC steal away from the Shinsengumi base to the field with the fireflies. There they confess their feelings for one another and share a passionate kiss as fireworks light up the sky. To be completely honest with you guys, I can’t choose one ending over the other. Both endings were just so perfect!

I don’t usually suggest this, but I highly recommend purchasing Saito’s POV story in addition to Saito’s Main Story. It was nice to finally understand what was going on in Saito’s head during the events of the main story… So, for characters like Saito, who don’t really wear their hearts on their sleeves I always purchase POV stories! Now that that’s out of the way… Saito’s route is every bit as much a story of forgiveness as it is a story of redemption. Both the MC and Saito must come to terms with the events of the past in order to move forward and Voltage did a wonderful job of developing the overall story. This is my new favorite route in the game, Saito started out as my favorite character and this story just made me love him even more! So if you haven’t already figured it out, I highly recommend playing this route! Hajime Saito’s route is one of the best Voltage routes I have ever played!

9 thoughts on “My Lover is the Silent Swordsman of the Shinsengumi- Era of Samurai: Code of Love- Hajime Saito”