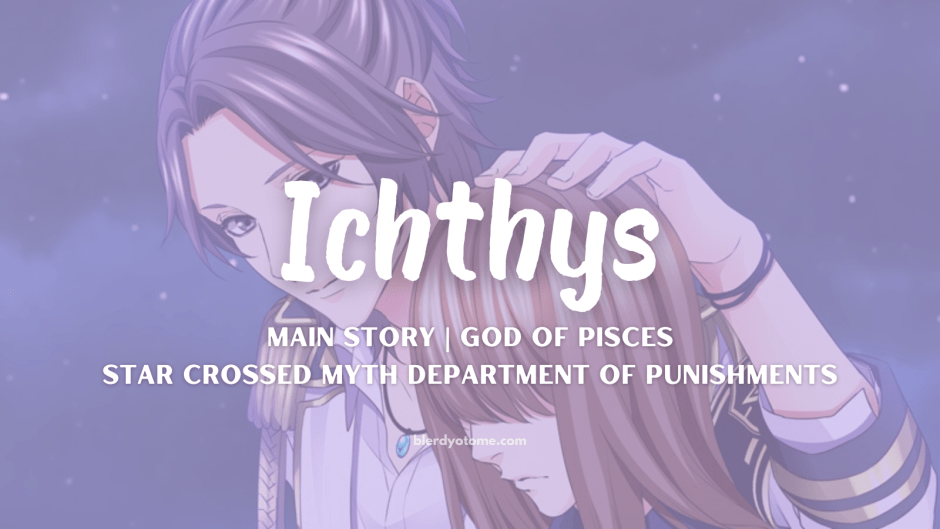 I have a confession to make, I was never interested in Ichthys’ route in Star Crossed Myth. Happy-go-lucky, prankster types aren’t my favorite characters. But, after playing through Ichthys’s Main Story, I’m glad I gave this silly guy a chance. Ichthys is the god of Pisces, and the god that just doesn’t know when to quit. Despite being harmless his jokes and pranks tend to incur the ire of those around him. But, there is more to his pranks than just having a good time. There’s something sad about this fun loving god.

Thoughts on Ichthys: Laugh to keep from crying

After the MC falls off of the roof of the planetarium during the star viewing event she calls out for Ichthys, because he seems to be the most approachable of the gods. Which is a fair assessment on her part, as Ichthys is by far the most easy-going and cheerful of the bunch. Unlike the other gods who treat the MC like a 12 year old trying to sit at the adult table during Thanksgiving dinner, Ichthys is more understanding towards her situation. However, his relaxed mannerisms and constant pranks makes him a very unreliable guy.

Even in the Heavens, his pranks went unappreciated by the other gods. When he first realizes that the MC is the source of their power on Earth he immediately uses her to cause mischief among the planetarium patrons. There are several times during the route where he is likened to a mischievous little boy. Even Scorpio refers to him as the ‘Problem Child’. On the surface, Ichthys is a non-stop hurricane of fun and excitement. But there’s more to his pranks than he lets on.

Unlike the other gods, Ichthys is not, immortal. Due to an event in his past, Ichthys’s lifespan is significantly diminished compared to the other gods. He tries to keep the full extent of his mortality a secret from others, because he doesn’t like when people treat him differently. Like most terminally ill otome characters, Ichthys tries to live in the moment. Instead of dealing with his condition head on Ichthys opts to hide behind his pranks. He puts everything he has into bringing joy to others.

However, his antics are often lost on the other gods who are unaware of the true intent behind them. Even his fellow Department of Punishment gods don’t know the full extent of his feelings about his condition. But they do their best to support him as best they can, especially Dui. Ironically enough, Ichthys’s special power is healing. However his ability significantly depletes his life force, despite knowing this Ichthys uses his ability anyway. Ichthys genuinely wants to bring happiness to others. Which at times seems contrary to his job in the Department of Punishments.

Instead of doling out punishments like Scorpio and the other Punishment gods, Ichthys takes a much different approach, instead opting to prank his victims. At first it just seems like he’s neglecting his duties as a god. He knows that his life is short, and instead of dwelling on missed opportunities, he makes the most of the time that he has left. However, when he meets the MC and falls in love, Ichthys begins to consider the shortcomings of his condition. As a result Ichthys becomes much more contemplative about his actions, even going so far as to open up about his fears about the future.

Thoughts on the MC: I’ll cry in your place

Like the other MCs in Star Crossed Myth, this one had her fair share of sass, even if most of it was internal dialogue. But, what really turned me on to this MC was how well she balanced Ichthys’s shenanigans. The MC definitely knows how to cut loose and have fun with the best of them. But she also knows when it’s time to get down to business. Unlike the others, she doesn’t judge Ichthys. Instead she praises him for his ability to make people happy with his pranks. She always manages to see the bright side of things, and it is that characteristic that ultimately wins Ichthys over. On top of that the MC immediately sees through his antics. She figures out early on that Ichthys uses his pranks to hide the fact that he is afraid of dying.

Do I Recommend Ichthy’s Route?

Typically, nice guys finish last, but not this time! Based on his description as a trickster I expected this route to be one big comedy routine… and believe me this route had it’s fair share of laughs. But, beneath all the laughter was a very emotional story, which goes to show that you can’t judge a book by its cover.  I was pleasantly surprised by how much I enjoyed this route and Ichthys himself.

Rather than having a big bad, this route focused on Ichthy’s illness and its effect on his overall character development. While he remains roughly the same by the end of the story, the way Ichthys deals with his condition is vastly different from start to finish. Instead of waiting for death to claim him, he actively attempts to fight his destiny, and in doing so he changes his fate.

The romance between the MC and Ichthys was well paced, everything seemed to naturally progress. Voltage did a great job of presenting the progression from acquaintances to friends, and ultimately to lovers. Because Ichthys is such an easy guy to get along with the changes in their relationship as the story progressed seemed natural, despite the relatively short time frame of the route.

There are two endings in this route, the Blessed Ending and the Forbidden Ending. In the Blessed End, after dealing with the King, Ichthys and the MC retire to his room. Once there Ichthys takes the MC on a swim in his fish tank and they share an underwater kiss. In the Forbidden End, once the MC and Ichthys return to Earth the other gods decide to throw him a surprise party. However, when Ichthys’s prank on Zyglavis goes to far, he and the MC flee. To be honest, I can’t choose which ending I like best…they both have their merits!

In the end, I definitely recommend giving this route a chance, Ichthys is a much more complex character than his character description would have you believe. While this isn’t my favorite route in the game, it does offer a nice change of pace from some of the more dramatic routes in Star Crossed Myth.

9 thoughts on “Star Crossed Myth | Ichthys Review: My Lover is a Mischievous God”