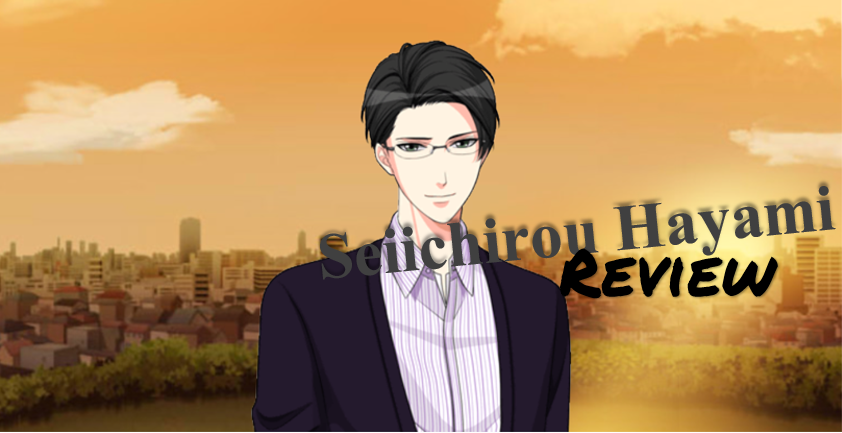 Sorry, it’s taken me awhile, but this character was chosen by you guys about four weeks ago during that week’s poll. Well I saw the votes and I’m not one to disappoint, so here’s my review of Seiichirou Hayami’s route in My Wedding and the 7 Rings!

I didn’t know what to expect from this route going in, because not much is known about Sei at this point in the game. In the other routes, he is merely the facilitator of the late CEOs will, and the man in charge of the Marriage Program. He mostly takes on an advisory role, assisting the MC as she completes the program, though he has been known to create minor obstacles for the MC and her chosen fiance as well. Despite his role in the marriage game, very little is known about Sei. At work he is one of the top executives of the Sanno Corporation, having worked under the former CEO, his skills are second to none. But, his emotionless disposition has lead to him being referred to as a cyborg among his peers.

The Man Pulling All the Strings 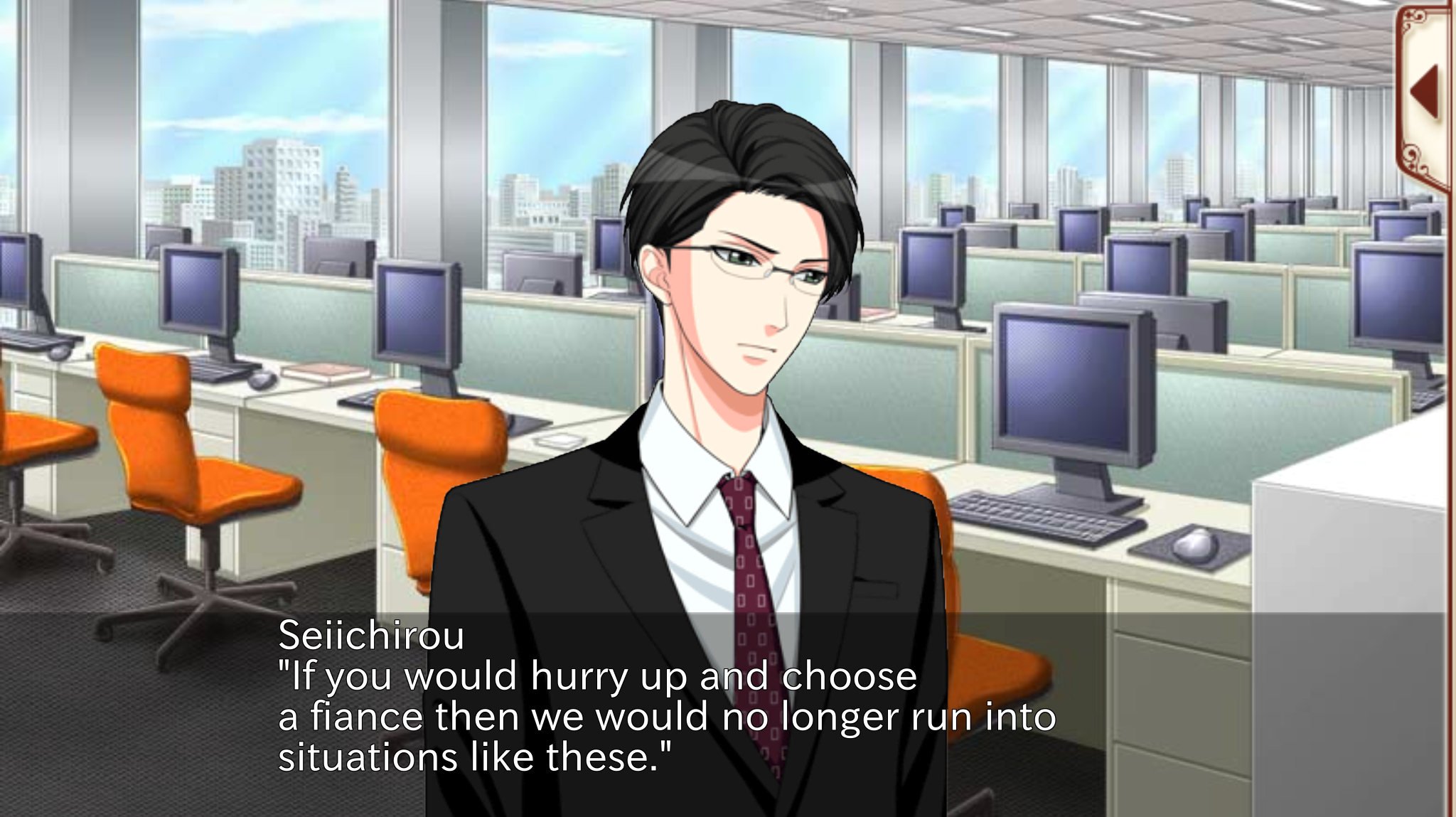 It has been three months and the MC still has yet to choose one of the Special Executives to complete the first stage of the Marriage Program. The Special Executives unleash their inner stalker, and begin relentlessly pursuing the MC at work and at home. It gets to the point that her neighbors and family members start to notice and she is forced to seek relief from the last person she’d ever expect to help her, Seiichirou. Sympathizing with her situation, Sei agrees to let her stay at his apartment temporarily, but in return she must choose one of the Special Executives by the end of the month. As the month wears on, the MC finds herself  falling in love with him as he reveals a side of himself that he keeps hidden from the others.

On the surface, Sei is a driven man, whose determination and hard work have placed among the top executives at Sanno Corporation, despite his young age. He is meticulous at his job, carrying out his duties with such flawless  precision that has earned a reputation as the resident cyborg of the company. After the CEO’s passing, Sei was promoted as acting chair of Sanno, a position he takes seriously. While Sei is a powerhouse in the office, his personal life is shrouded in mystery. He keeps his true intentions and feelings hidden, behind his cyborg persona. But, when he finally opens up, Sei can be a truly caring man, especially towards the MC. 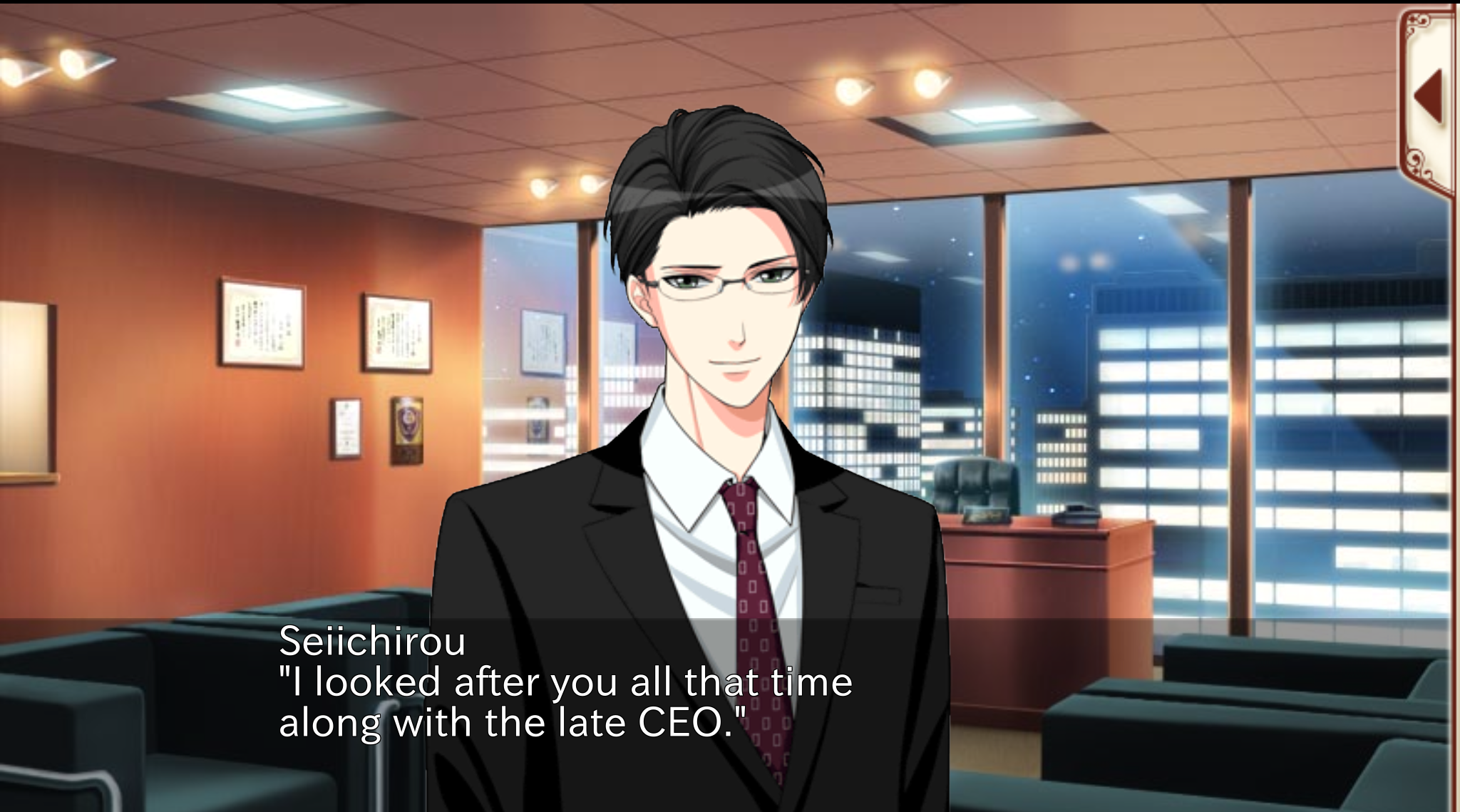 Prior to the game, Seiichirou served as the late CEO’s right hand man and closest confidant. He served his former boss with an unwavering loyalty, carrying out every task set to him without complaint. While the CEO was alive, Sei was instructed to gather information about the MC and to report it back to the CEO. Initially, Sei disliked keeping tabs on the MC, feeling that his time should be better spent serving the CEO, but the more he watched her, the more enjoyable it became. In time he became genuinely invested in making her happy. His feelings for her run much deeper than even he realized, he constantly allows her to postpone selecting a fiance even though the future of Sanno depends on her decision. He even goes to bat for her when the Board of Directors began pressuring him to expedite the Marriage Program. 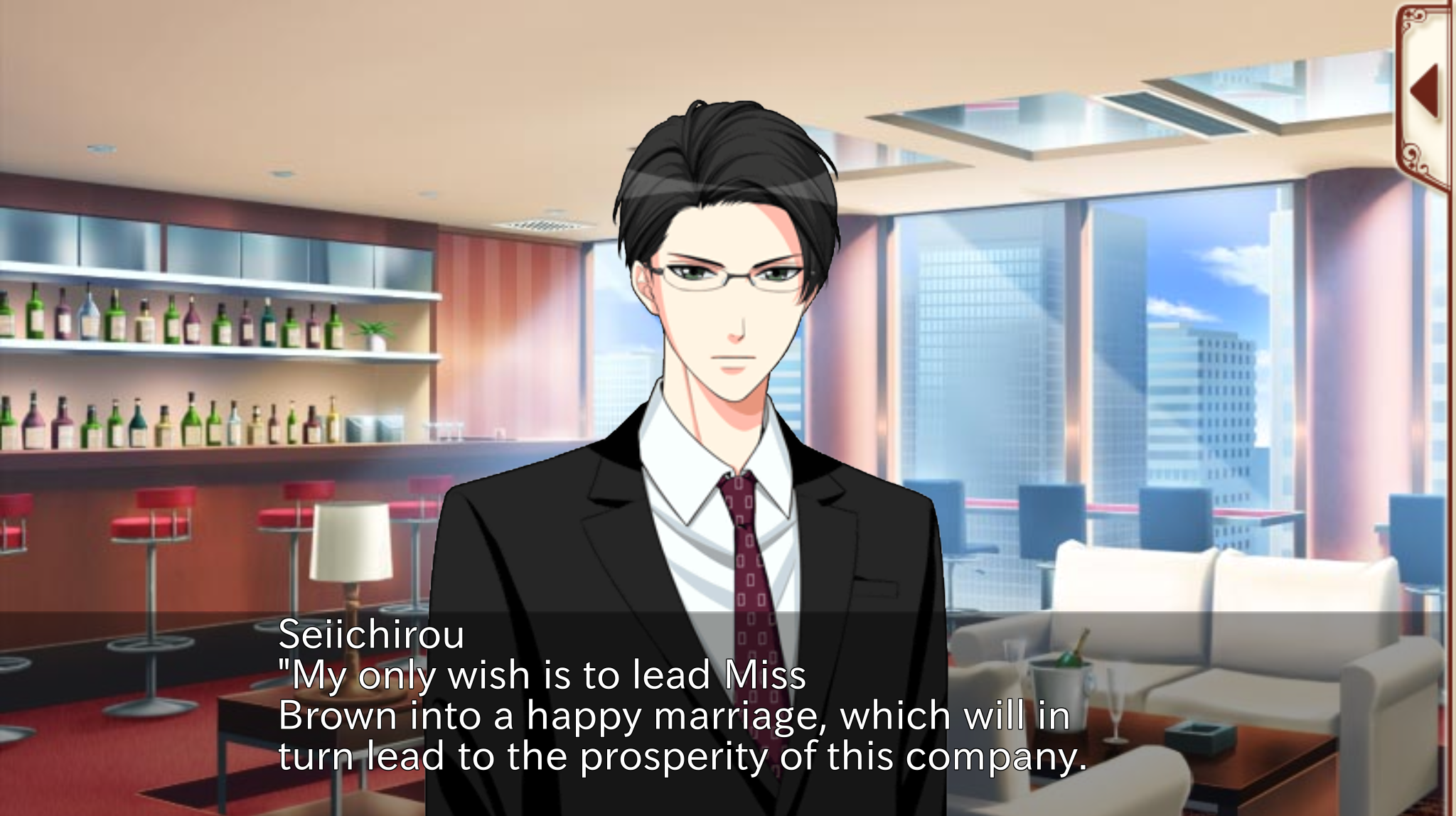 The relationship between the MC and Sei was a slow build, as Sei’s loyalty to the company and the former CEO kept him from acting on his feelings. It was heartbreaking to see him constantly pushing the MC towards the other Special Execs. Despite his manipulative and impassive actions, it’s apparent that he cares deeply for the MC, so much so that he is willing to give up his own happiness for hers. Whenever the MC would get too close to him, he would put up his business persona, in order to dissuade her affections for him. But, the thought of losing the MC to another man proves to be too much for him, and he eventually declares his love for her in one of the most dramatic and OOC ways possible.

I’ve Watched You for So Long 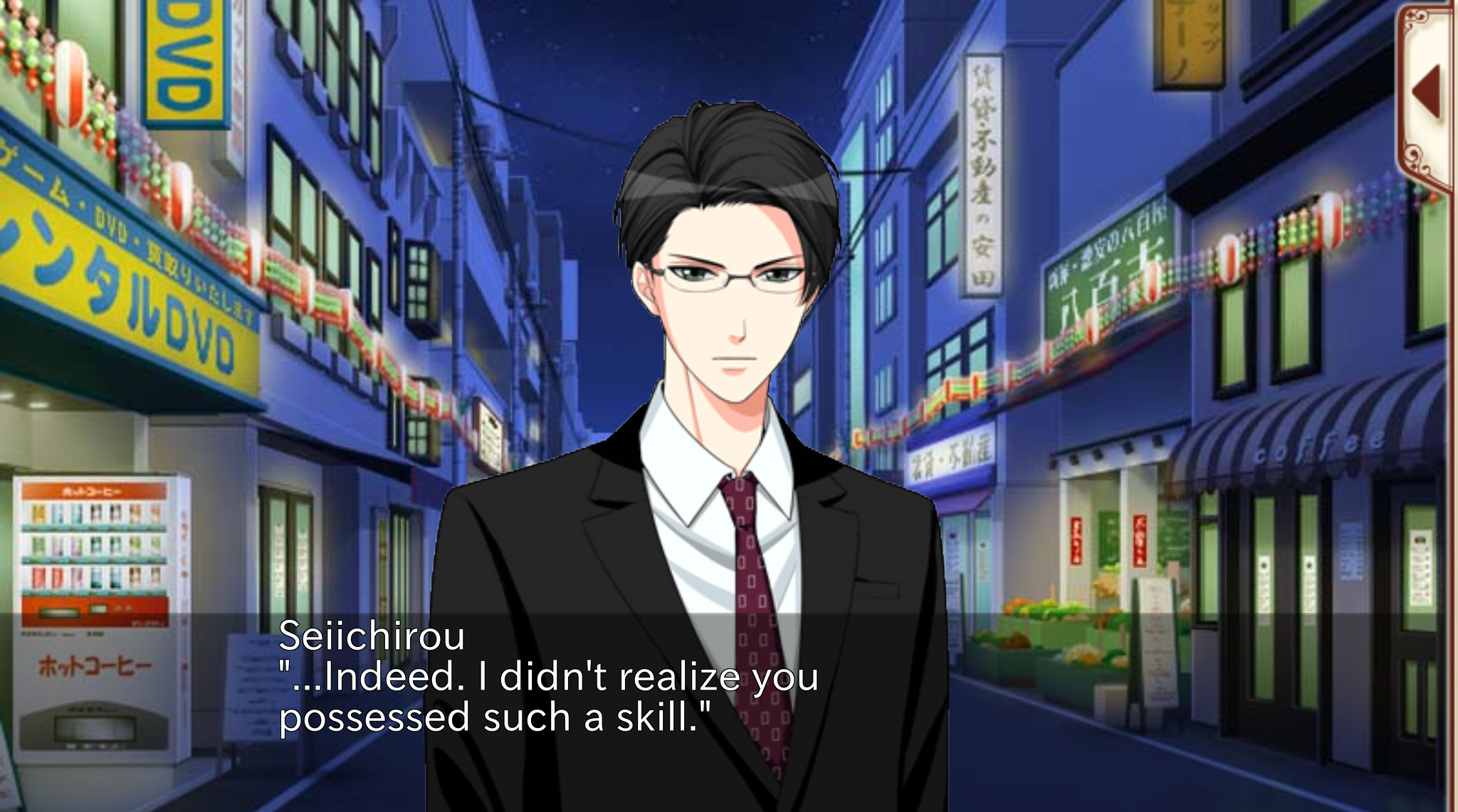 So it looks like the guys of the Department of Wishes have been listening to my poor otoge prayers, because this MC rocks! I found myself really relating to this MC so much more than I thought I would.  My Wedding and the 7 Rings has had some of the best Voltage MCs ever! Not only does this woman have a backbone, she’s even capable at her job.  She realizes early on that the ball is very much in her court with the whole Marriage Program thing and she uses that to her advantage. It’s her choice, not their’s, as to who will become the next CEO and boy does she keep it hanging over their heads. You can say her indecision isn’t intentional, but the fact remains that she literally kept six handsome, intelligent, and wealthy men under her thumb for three whole months. I don’t know about you, but that’s winning the game, if I ever saw it. 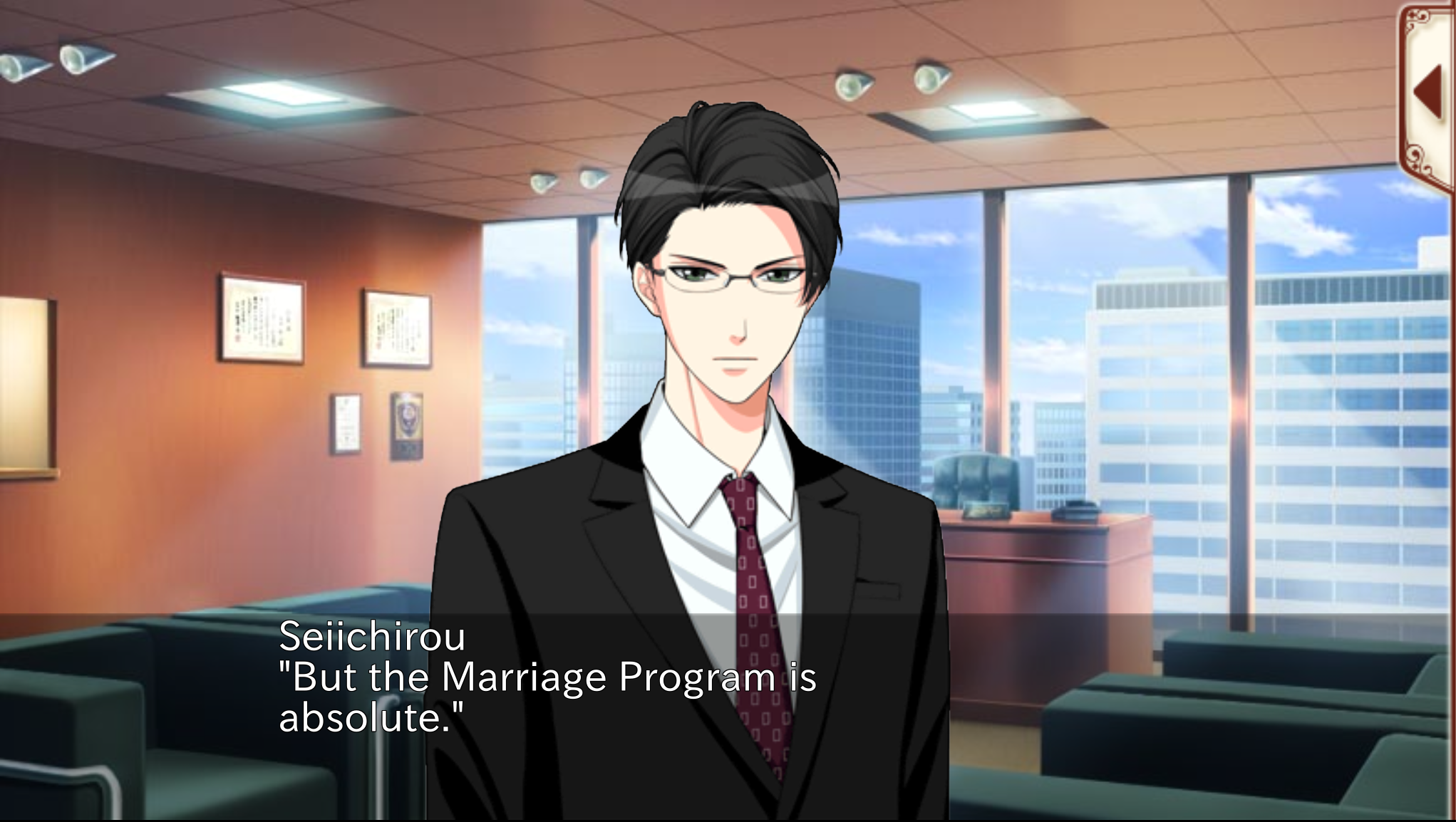 The relationship between the MC and Sei gets really bogged down by the Marriage Program. Both characters are held back by their obligations to the company and to honoring the CEO’s last wishes, so there are a lot of unspoken moments of affection between them. Sei is used to handling every burden on his own, so it was refreshing to see the MC step up and take charge when he was unable to do so. However, each step forward that they take as a couple is quickly shut down by Sei, who feels obligated to uphold the late CEO’s wishes. Her, stubbornness and determination is what ultimately wins Sei over in the end and it was interesting to see her bulldoze her way into his heart (not that it was that difficult). The MC definitely handled her circumstances well, as she was willing to put her own feelings to the side for the good of the company, which I found extremely commendable. She realizes her feelings for Sei towards the middle/end of the route, but she doesn’t put pressure on him to reciprocate. She doesn’t run away from her responsibilities, instead she faces them head on, despite her personal feelings.

While playing this route I couldn’t help but think back to the anime with a similar plot, Hanasakeru Seishonen. There are so many parallels that I could draw between this game and that show. Maybe someone watched the anime before writing the plot for this game or something, but this is the exact same plot (minus the political espionage) as Hanasakeru Seishonen! In both a man is tasked by the protagonist’s wealthy relative to oversee a marriage game of which both men are not participants. They then both fall in love with the protagonist (or have always been in love with her) causing them to struggle with the dilemma of following through with their assigned mission and their duty to their heart.The stories aren’t exact copies of each other but, they’re damn near close enough. So the concept of this route wasn’t necessarily fresh to me, but I still found myself enjoying it nonetheless.

The overall story was well done, and it did an excellent job exposing some of the negative aspects of the Marriage Program. This route primarily dealt with the conflict between the character’s personal feelings and their obligations to both the Program and the company. You really feel the  tension as both Sei and the MC, are forced to make a decision that will have serious implications not just in their own lives, but in the lives of those around them. Sei’s character development progressed well throughout the route, and I was very pleased to get an in depth view of the man so integral to the Marriage Program. There is so much more to him than what we see in the other Executives’s routes and I was very pleased with the way it played out.

While I enjoyed Sei immensely, there were two guys that really showed out in this route, Asahi and Chitose. These guys were the real MVPs. Chitose felt less like a potential love interest in this route and more like a fairy godmother of sorts to the MC. He was sweet and attentive, always willing to offer her advice about Sei. I found myself being swayed by his encouragement and genuinely sincere  approach. Then there’s Asahi. I was most surprised by how awesome he was to the MC. Don’t get me wrong, he was the same pushy jerk he is in the other routes, but somehow he came off a lot softer than usual. Way to tempt me Voltage.

There are two endings in this route: Happy End and the Super Happy End. In the Happy End, the MC goes public as the late CEO’s granddaughter during the Stockholder’s meeting. Sei then declares to the astonished crowd that he will marry you and become the next CEO. Afterwards the MC and the Execs celebrate at Oasis and Hayami reveals what he’s like drunk. Hilarity ensues… In the Super Happy End, after clearing up the Stockholders meeting, Hayami and the MC leave work early. Before they can get far, Sei and the MC share a sweet passionate moment together. Both endings have their merits, but I like the Happy Ending best, a drunk Sei is hilarious!

I also want to note that if you pick the right choices throughout the route, you will unlock five Secret Stories (you can pay $2.99 up front to unlock them all). These are cute insights into Sei’s character at certain points in the story and I highly suggest trying to get them all.

Sei’s route was very well written, the character development was amazing and I was surprised by how dynamic the characters were. This was a solid addition to My Wedding and the 7 Rings and I highly recommend it, however, I couldn’t help but want more from the story, I just can’t put my finger on it, but something was missing.  Maybe I’ll feel more satisfied after playing the Sequel.

Have you played any other Voltage games? Do you have any game suggestions for my next review? Any specific characters I should try out? Will this be your first My Wedding and the 7 Rings route? Feel free to let me know in the Comments Section or Ask Me on my tumblr! As always Thank You for reading!

11 thoughts on “The Cyborg Executive Who Stole My Heart: My Wedding and the 7 Rings-Seiichirou Hayami”