So, because Voltage is putting out new games and stories faster than I can play them all, my backlog is extremely long right now. Every time I tackle a game, Voltage puts out another one, so finding the time to play them all has been hard to do. However, I did manage to find the time to play through a few games, this was one of those games. 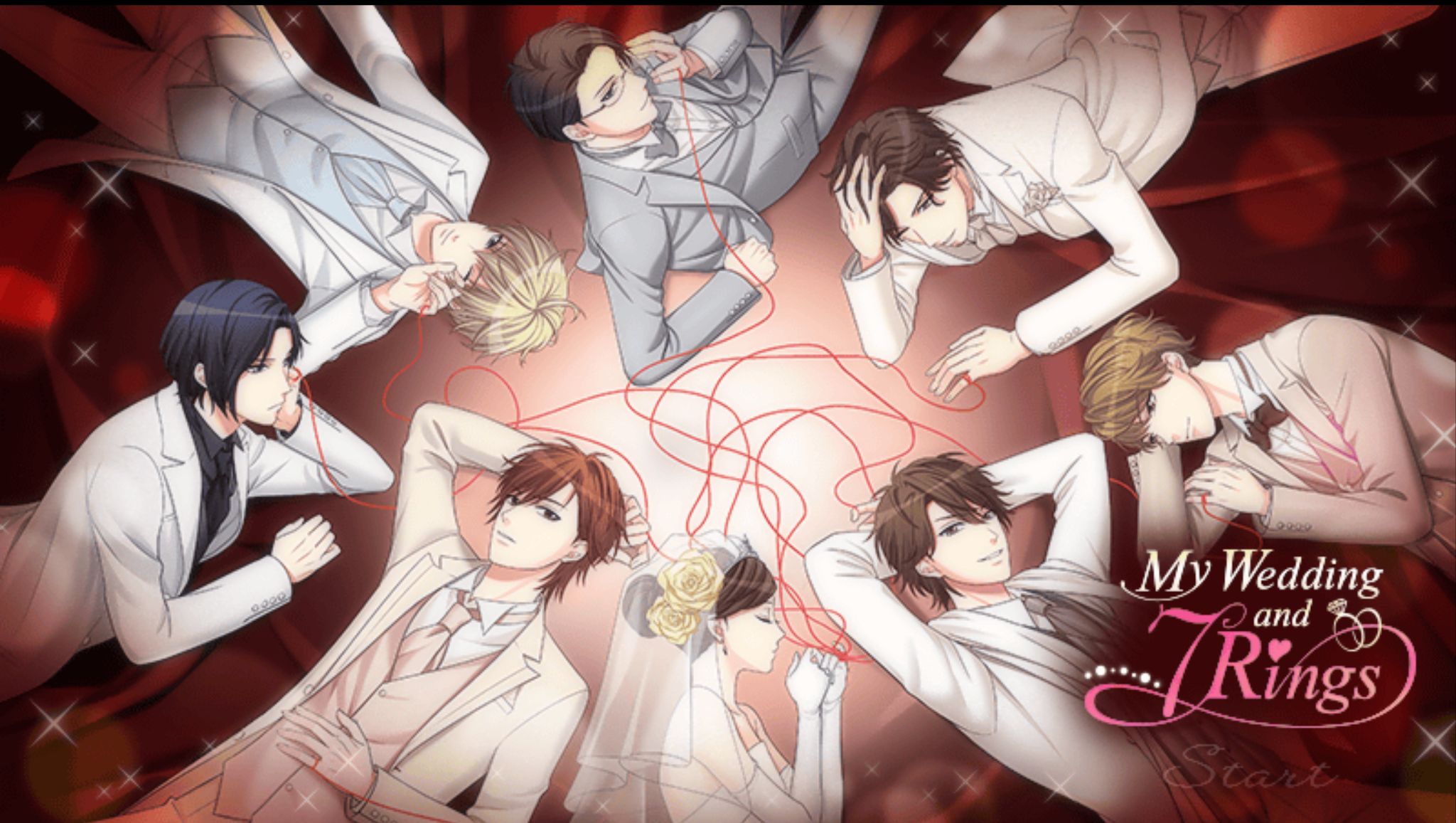 A little over a year ago, Voltage released the English language version of  My Wedding and the 7 Rings a spin-off of the extremely popular, My Forged Wedding (MFW). The new game takes place in the same universe as the MFW series, and even features two of the love interests from the previous game, with a slightly modified back story.

At the start of the game you (name changeable) are just a regular office lady at Sanno Corporation, a huge Japanese conglomerate company. That is until the CEO of the company passes away suddenly, causing a succession crisis. An assembly is held that day and seven of the company’s top executives are called to the stage and given new titles within the company as Special Executives. To your surprise, you are called to the stage as well and given an award, which comes with a cash reward, recognizing your hard work within the company. You are immediately asked to sign some forms in order to receive to receive the cash reward. The assembly ends with Seiichirou, the former CEO’s right hand man, announcing that he will be acting as temporary CEO of the company.

Later that day you are called to the CEO’s office under the guise of receiving your cash prize. However, when you get there Seiichirou reveals that you are the granddaughter of the late CEO and new owner of the company. But in order to claim her inheritance she must marry one of the Special Executives. Seiichirou then demands that you pick a partner from the gathered men.

So I have a favorite and it’s Kai. I guess I have a thing for the cold, detached types, especially when they have a change of heart and become more passionate and sweet. His story definitely left a big impression on me, and I highly recommend it!

Overall, the game is a solid addition to the Voltage line up. The characters are interesting, and I like how Voltage carried over the fake marriage concept from MFW, while still managing to put a unique spin on it. Now, I will say that I was a little disappointed with Yamato and Ren (the two characters brought over from MFW). Aside from a few minor changes to their backstories, there wasn’t much in the way of character upgrades from the parent game. I’m not saying that they were all bad, they definitely had their good points in the game, I guess I was expecting more than what I got.Of the two, Ren got the better end of the deal in MWA7R.  But, if you were a fan of both Ren and Yamato in MFW, you will be happy with their characterization in MWA7R.

The music is nice and blends well with the mood of the game. Some of the soundtracks from My Forged Wedding make an appearance in this new game, and it blends well with the new track that were added. The game play is similar to the other Voltage games. Like many of their newer games, there is a meter that lets the player know which ending they are headed towards: Super Happy Ending and Happy Ending. The Super Happy Ending is the best ending and is typically the most romantic of the two. In addition to the endings, the player can also unlock five secret stories, in the main story by answering certain choice correctly. These secret stories allow you to see a different side of the chosen love interest.

I really like this game, and I strongly encourage fans of Voltage to give it a shot play it, if they haven’t already.

9 thoughts on “Mini Review: My Wedding and the 7 Rings”