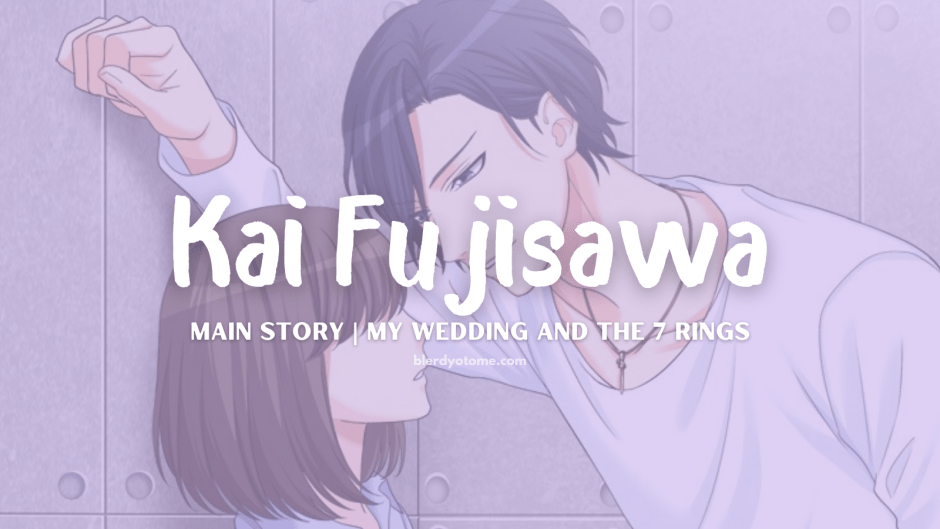 My Wedding and the 7 Rings did not pique my interest, at first. My Forged Wedding was one of my favorite games. And the fake marriage premise was a bit played out for me. But, that was before I saw Kai Fujisawa. The minute I saw Kai’s character design, I started singing a completely different tune. Kai is the calculating aloof type, both in his personal and in his professional life. Which makes him the perfect fit as Sanno Corporation’s Special Executive of IT Solutions. Kai is ruthless and will do anything to get what he wants. Even if that means having a loveless marriage.

Thoughts on Kai Fujisawa: He Never Factored Love into the Equation

When asked to pick one of the gathered Special Executives, the MC chooses Kai Fujisawa. From her perspective he looks like the man who is least interested in her romantically. Seiichirou then explains that Phase one of the Marriage Program is underway. Starting immediately the MC and Kai will be living under the same roof. After breaking down some house rules, namely, that the MC can use anything in the house, except his stupidly obnoxious three monitor computer system.

The MC agrees and the two of them settle into an awkward cohabitation. They barely interact with one another and when they do, Kai keeps the MC at a distance. For him, marrying the MC is just a means to securing the CEO position. So he treats their arrangement like he would any other business transaction. There early interactions are full of petty arguments. Which only escalates when Kai blackmails the MC into signing a marriage license. But, despite all Kai’s efforts to seem like a happy couple, the other guys notice that there is no love lost between the pair. So, Kai responds by manipulating the MC into acting lovey dovey when the other Special Execs are around. He also very subtly reminds her of their agreement every chance he gets, keeping the MC on a tight leash.

And it seems that Kai’s efforts are finally paying off, because the other Execs back off. Except Sei (bless him), who is still a little suspicious. While the MC goes along with the ruse in front of the others. Behind the scenes she comes up with a plan to get one over on Kai. Unbeknownst to the MC, Kai is starting to catch feelings, becoming noticeably kinder to her. Which in turn gives the MC the push to learn more about Kai and his past.

Initially the MC sympathizes with Kai and agrees to help him with his plan. But, it isn’t until Kai explains everything to her that she really gets on board with helping him get revenge. However, as she uncovers the truth she realizes that revenge isn’t the right course of action. The MC urges Kai to give up on revenge and start really living his life. But, this has the opposite effect and he completely cuts the MC off again. Let me tell you it is heartbreaking to see him have a complete turn around after all his growth.

Thoughts on the MC: The Worst Kind of Virus

When Voltage released My Wedding and the 7 Rings a lot of folks were disappointed with the MC. I don’t know which route they were playing, because I love the MC in Kai Fujisawa’s route! She is definitely one of the better Voltage MCs. This MC is an intelligent, and hard working career woman. While she is a bit sheltered she does have common sense.

The MC and Kai are two very different people with very different upbringings. So it makes sense that they butt heads as much as they do in the beginning. The MC had a strong supportive group of people to help give her some sense of stability in her life. While Kai spent most of his life alone, without any real support from anyone. So, the MC has a much more optimistic outlook on life. But, please don’t mistake her optimism for weakness. This MC does not take anything in this story lying down. When Kai steps out of line, she is quick to put him in his place. But her biggest achievement is how she weaponizes kindness…kindness!

She takes the time to understand Kai and his situation, which goes a long way in helping him trust her. There is one particular moment in the route that I did not like. After receiving some bad news Kai and becomes a complete emotional wreck. Not knowing what to do for him the MC offers to sleep with Kai to comfort him. While it is a consensual encounter, the situation just didn’t sit well with me. Kai and the MC’s emotional vulnerable and the whole thing is very bittersweet. Kai at one point even attempts to shut the sex down, but the MC insists that she is okay with sleeping with him.

Do I Recommend Kai Fujisawa’s Route?

I loved Kai Fujisawa’s Main Story, it’s one of the better written routes in My Wedding and the 7 Rings. This is a very difficult and somewhat dark story, and Voltage did a great job with it. As characters, both Kai and the MC were fleshed! There weren’t too many convoluted plotlines and everything seemed to progress naturally.

The overall, the plot is pretty fast paced, but you never feel too overwhelmed by it. In fact, you get swept up in all of the suspense, curiosity driving you to see how the whole thing turns out! But, the real MVP in this story is Seiichiro! As a side character, he is super supportive of the MC as she navigates her budding relationship with Kai. He even offers her a listening ear for the MC when things with Kai get to be a bit too intense. Seeing his interactions with the MC in this route only got me more curious about how his own route.

Also if you pick the right choices during the route, you can unlock five Secret Stories. You can also pay $2.99 up front to unlock them all. These are cute POV stories that give insight into Kai’s thoughts and feelings in the game. I highly suggest trying to get them all.

Some folks are a smidge disappointed at how anticlimactic the confession scene is in this route. For once I wholeheartedly agree, it was so abrupt. But it was definitely an in character moment for Kai, so it works. All in all, I loved Kai Fujisawa and I absolutely loved this route. He‘s a very complex character and I think Voltage did a great job of fleshing that out in the story. I absolutely recommend this route, it is one of the best Voltage stories I have ever read!

3 thoughts on “My Wedding and the 7 Rings | Kai Fujisawa Review: The Cold IT Executive Who Stole My Heart”