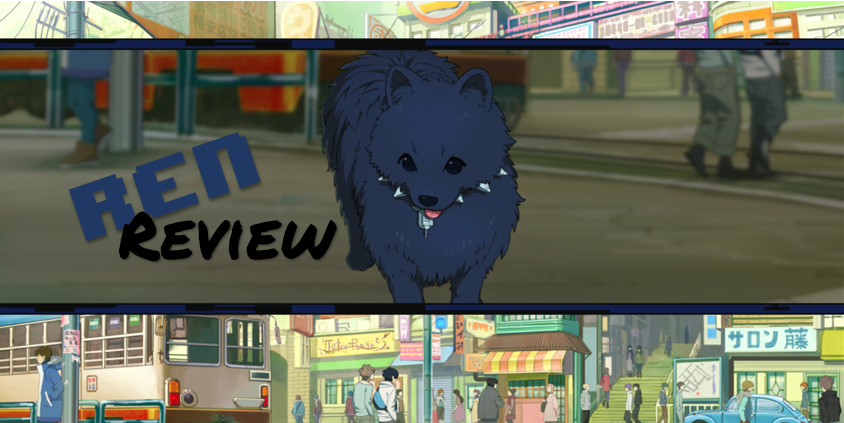 First, I can’t believe that I’m finally done with this game! DRAMAtical Murder was the first game I reviewed on this blog and it has taken me nine whole months to get through it all. This is a huge achievement for me, I usually play one route and never touch the game again. I have game commitment issues lol…. So, unlike the other reviews I plan on keeping this as short as possible, so I can fit in my overall final thoughts on the game at the end, besides I pretty much got all my ranting out in the Tumblr live blog. I will try to keep the spoilers to a minimum, but this is the True canon route of the game, so that might be easier said than done. So without further ado, the last DMMd route, here’s Ren! 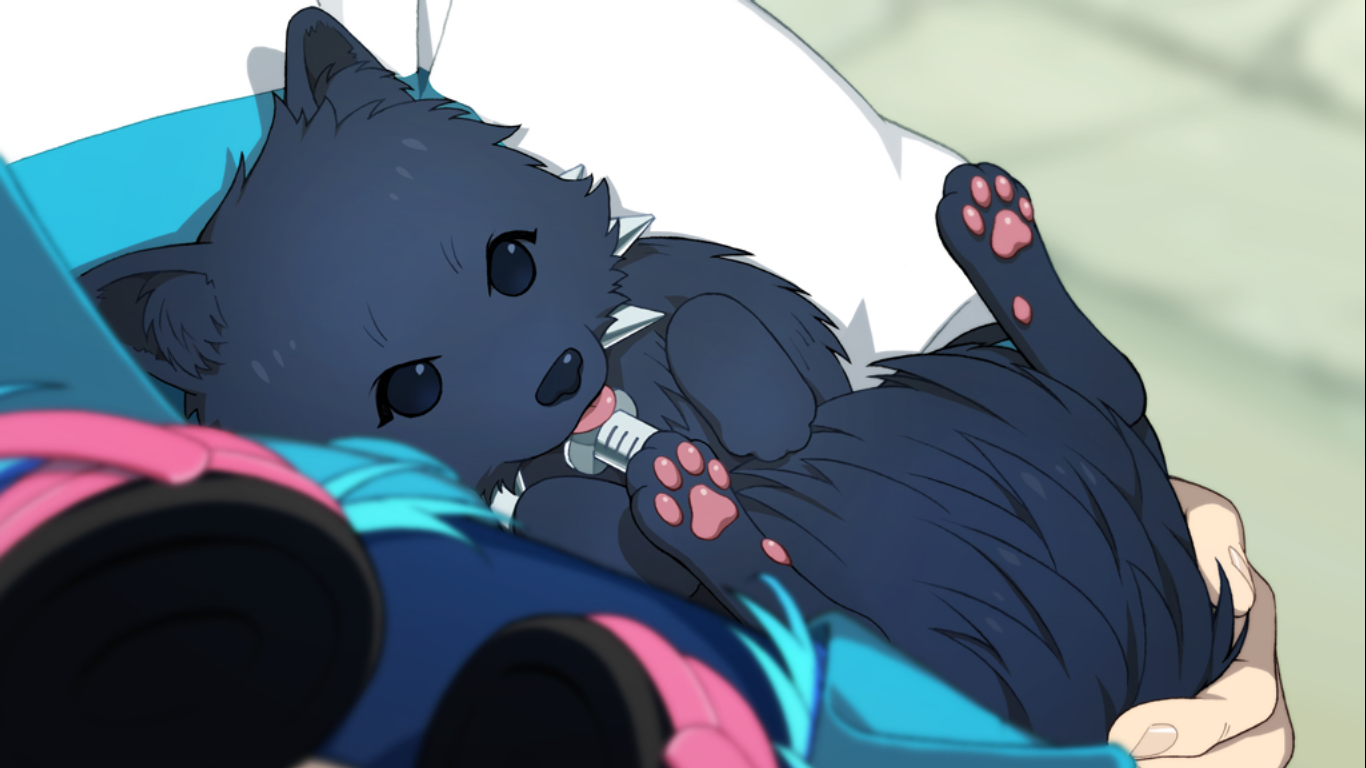 Believe in the You that Believes in Me 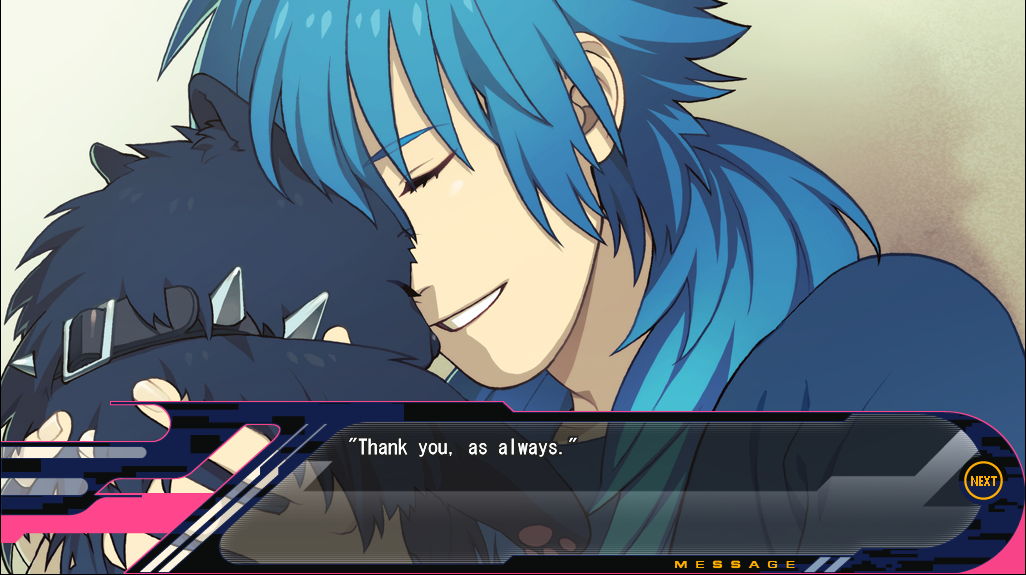 Ren is Aoba’s allmate companion, his default appearance is that of a small dark blue Japanese Spitz. While in Rhyme, Ren takes on the appearance of a muscular man, with dark blue hair.  He is an older allmate model, so Aoba usually has to perform regular maintenance on him to keep him in tip top shape. He and Aoba share a close bond that extends far beyond that of normal allmate/human relations. Several characters, namely Mink and Noiz, remark that Aoba has an unhealthy attachment to Ren. 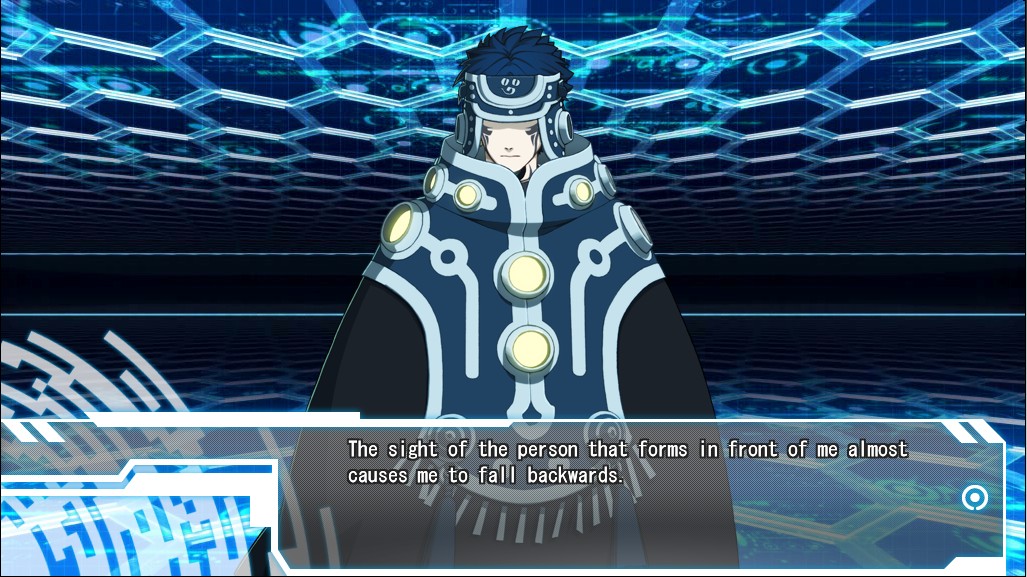 Aoba see’s Ren as more than a partner, regarding him as a sibling. Despite being a  a robo-dog, Ren is very mature, serving as the voice of reason/conscience for Aoba throughout all of the routes of the game. However, he has a hard time understanding some informal sayings because he has a tendency to take things literally, which leads to some cute misunderstandings. While he maintains a calm demeanor throughout the game, Ren has been known to become emotionally expressive when Aoba is in trouble. Beneath his calm exterior, Ren harbors some very deep and conflicting emotions towards Aoba. His feelings for Aoba run much deeper than what is typically expected of allmates, this is especially evident when he is infected by  an allmate programming bug. During that time, Ren begins to doubt the bond he and Aoba share, becoming noticeably more moody and aloof.

For a majority of the story, Ren stays in his cute fwuffy doggie form, which was a bit of a drag. I was really looking forward some sexy bishie Ren sprites, but having Ren stay in his doggie form was an unexpected boon for the overall plot. It allowed for Aoba to fully develop as a character. In this route he really steps up and becomes a badass, I would have never guessed Aoba was such a capable individual, based on his characterization in the rest of the game. 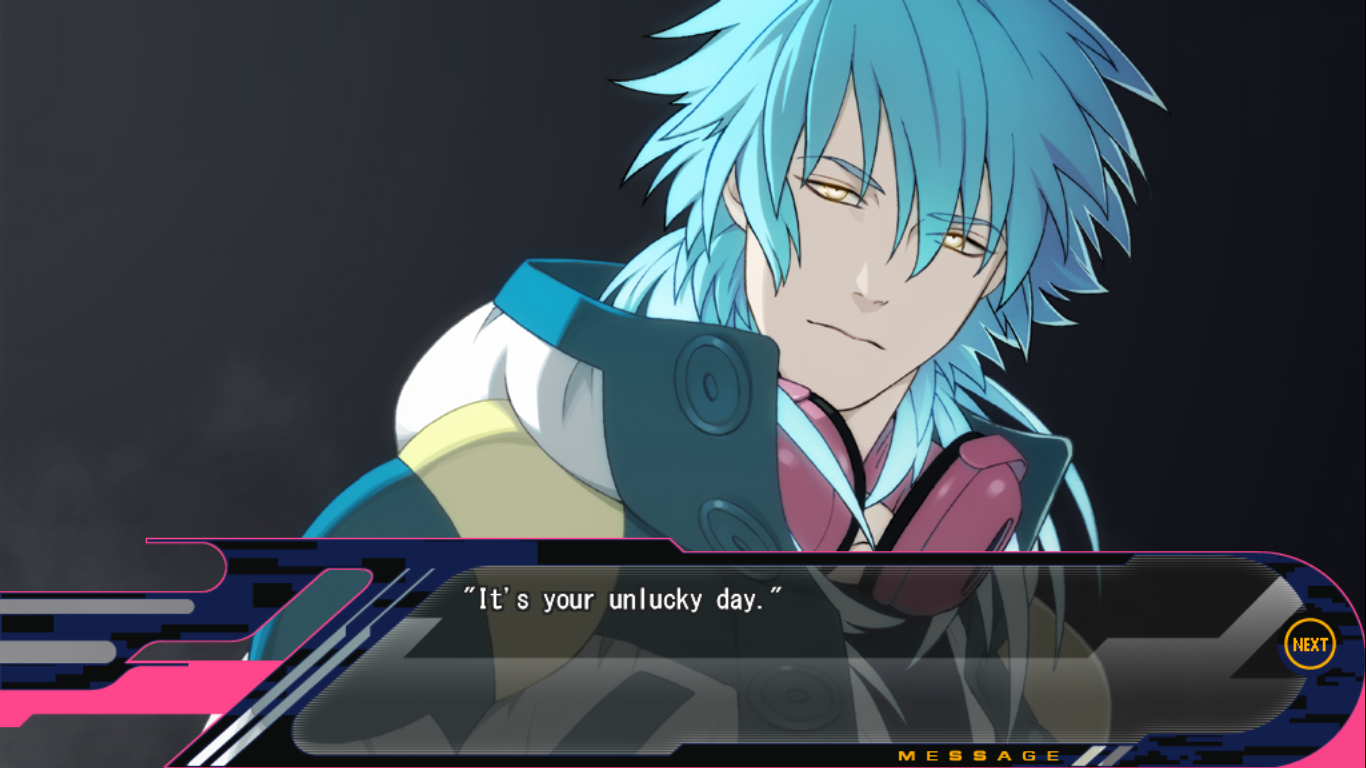 Because he doesn’t have someone to latch on to like in the other routes, the writers were able to showcase his abilities much more prominently. He does more in this route than he’s done in any of the other routes of the game, even Haga’s taser gets its time to shine too. I was very impressed with the writing for Aoba this time around, it was refreshing! Uke unchained Aoba, more than made up for all the weak, wishy washy behavior from his previous iterations throughout the game. However, I do want to make note of Aoba’s temper. He is one repressed uke, I was extremely surprised at how emotionally unstable he is, both normally and as a result of his Scrap personality. I never knew he had that much anger in him. 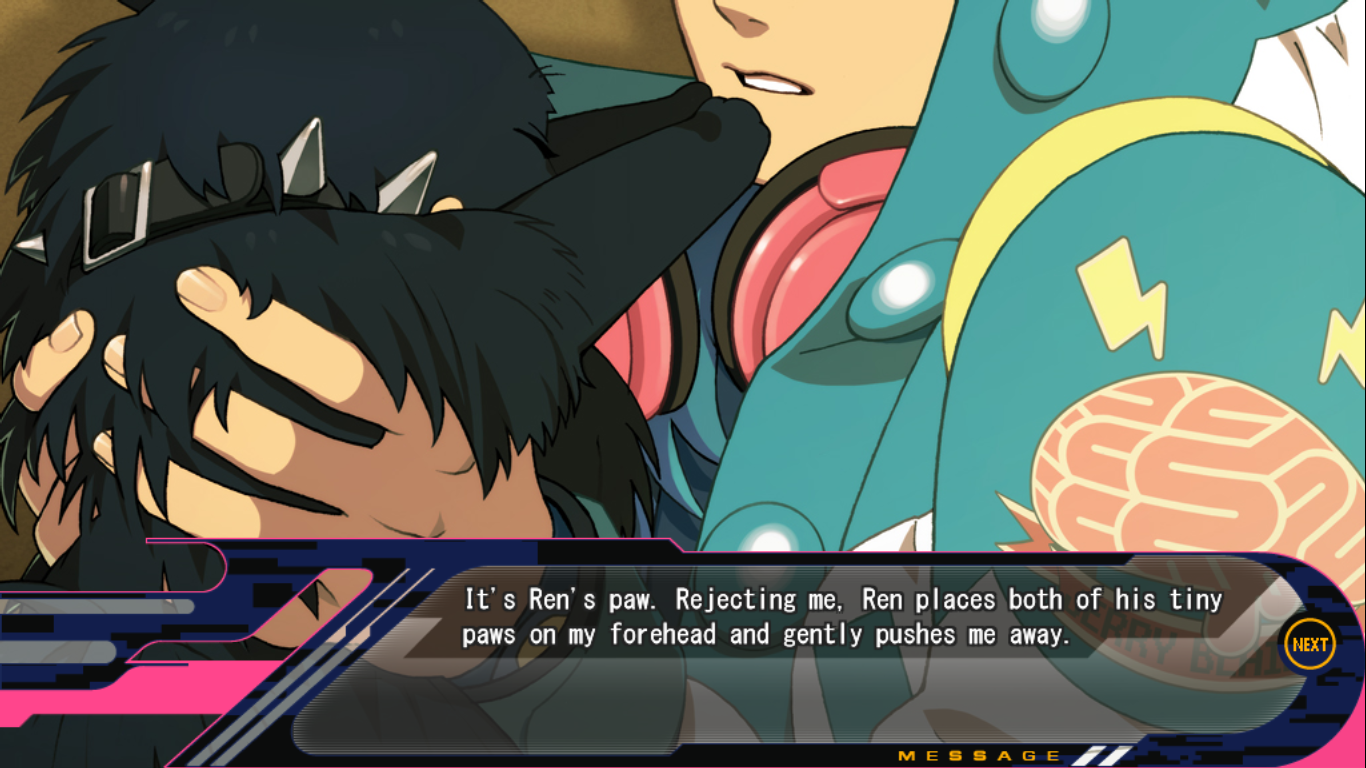 There where two central conflicts in Ren’s route; the first being the changing relationship between Aoba and Ren, and the second being Toue’s mind control scheme. Both issues were given equal representation during the course of the route, but the romance/relationship conflict felt a little forced. I had a really hard time believing that Aoba would honestly develop feelings for his former pet. Then there was  that whole business with the allmate malfunction. That was a really poor way to introduce Ren’s erratic behavior. I would have liked to have seen Toue directly target Ren, rather than some arbitrary mass allmate attack. Don’t get me wrong when Ren began to malfunction, I developed some strong feels about the situation. It was so sad to see him push Aoba away, especially when there was no real explanation for his personality shift. But, I couldn’t help likening the change to that of an adolescent going through puberty.  This could have just as easily have been written as an alone ending, where Aoba only deals with Toue. But, alas it wasn’t. 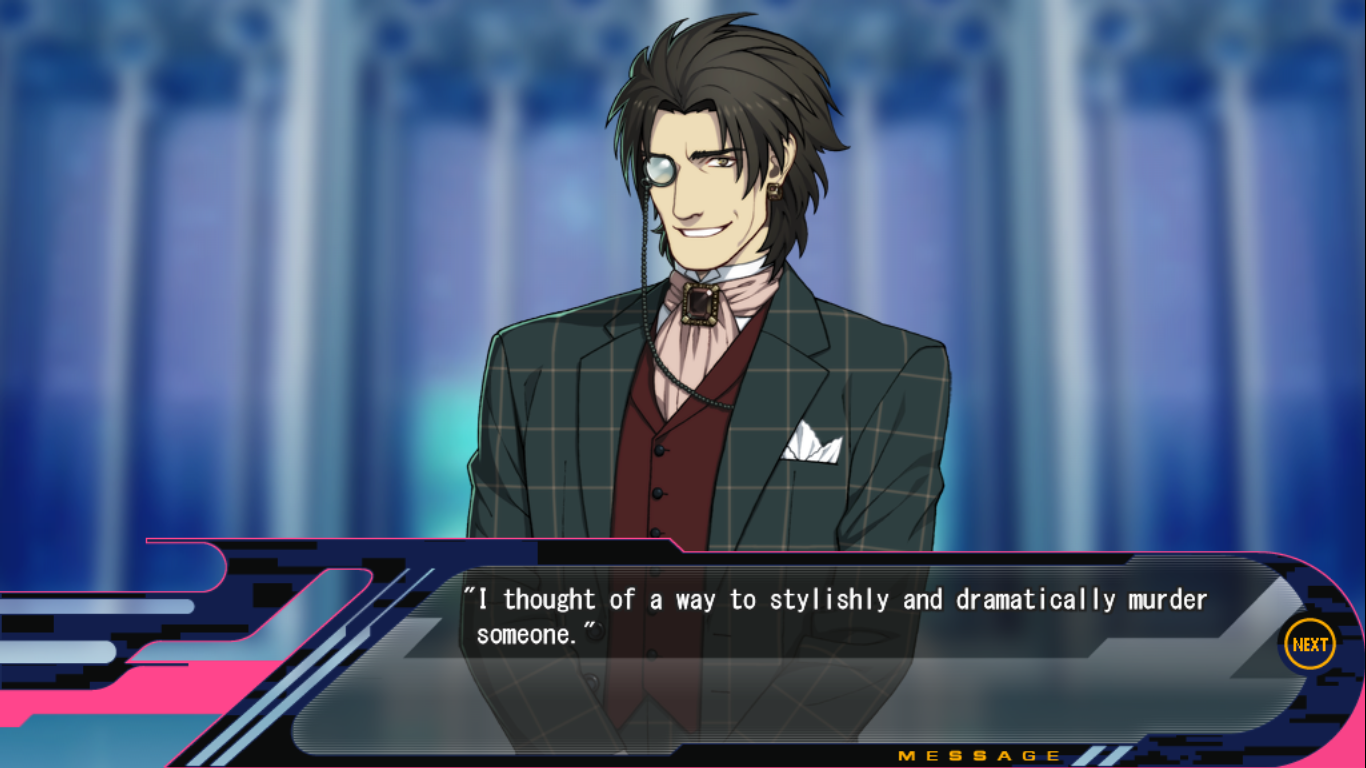 The Toue plot on the other hand was very well developed, especially with all the hints and context clues pieced together from the previous routes. Everything just fell into place, the writers did an excellent job of stringing all of the past plot points into one cohesive narrative. Toue’s overall objective, while a little Pinky and the Brain-esque in practice, was well planned and executed. The implications of Toue’s plot are simply terrifying, because their cult like undertones are not the baseless ideals of a madman. They have strong philosophical ties, and they are completely believable. Add Aoba’s orgins and Toue’s experimentation to the mix, and you have a cesspool of ethical dilemmas and human rights violations.  But, what made it all the more shudder inducing, was the fact that there were no malicious intentions behind his actions. He simply did things because he could, this apathy towards humanity is reminiscent of a child blindly stepping on an ant hill simply because it exists.

Bad End 1: Aoba becomes the sex slave of Virus and Trip…and there’s DP with some bestiality mixed in for extra measure….

Bad End 2: Aoba decides to use Scrap on himself. The inside of his head looks like something out of the Matrix, with all of his memories displayed on screens. Ren in human form appears and attacks Aoba, after a while questions about Ren appear on the screen. If the player answers too many questions wrong, Scrap will fail and Ren will eat Aoba.

Good End: Everything is explained…Every loose end, every plot twist… Everything! This game leaves no stone un-turned! 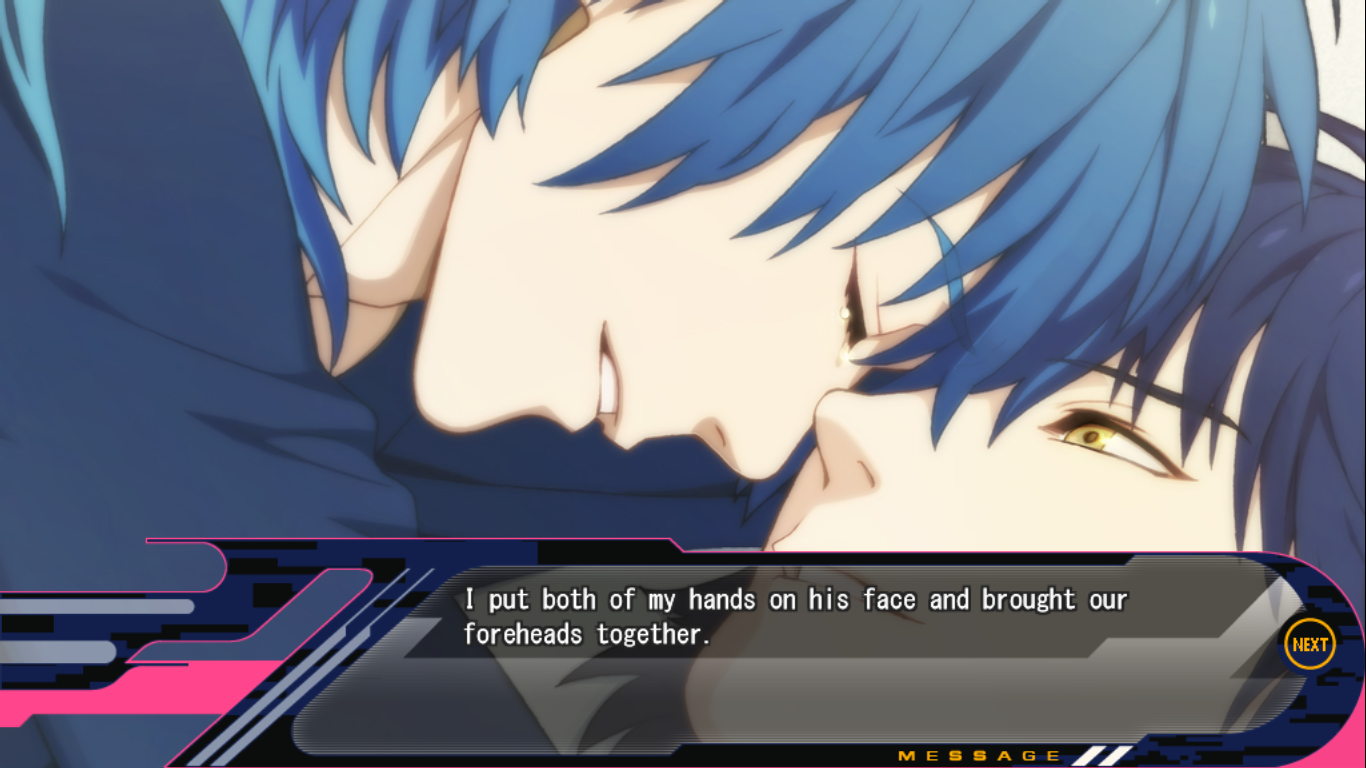 There is so much that didn’t make it into this post, I wanted this to be as spoiler free as possible. But, if you want more substance I highly suggest going over to my Tumblr by clicking HERE, and checking out my live blogging posts. This was by far the most interesting route in the game, and the most revealing. All of the puzzle pieces started to fall into place the longer I played. Aoba’s past is fully explained as well as Toue’s true intentions. This route explains everything…EVERYTHING, remember all those loose ends and unanswered questions from the other route? Well this is where everything gets cleared up.

I enjoyed this route, but I felt that the romance between Aoba and Ren was clunky and unnecessary. The plot could have been improved greatly by eliminating romance from the plot altogether! Everything about it gave me pause, but the sex scene takes the cake. I mean, think about it, for the past 10 years or so, Ren has been Aoba’s pet dog. So, even after he gains human form, I had a hard time not thinking about him as a DOG. Which means that by initiating a relationship with Ren, Aoba is in effect fucking his dog. There is way more to this, but as I said in the beginning, I wanted to keep this spoiler free. But, let’s just say Aoba and Ren take mindfuck a little too literally.

In the end, I still have mixed feelings about the romance aspect of the route, but as a whole Ren’s route provided a fitting conclusion to the DRAMAtical Murder saga. . At points this route just felt like one extremely long stretch of exposition, but that’s what happens when you play the True End…So, in the end despite some minor complaints and concerns, I still recommend this route. DMMd is not complete without playing this route.

So since this is the final route of DMMd, and since I’m too lazy to make this a separate post, I wanted to take the time to air out my final thoughts on the game here.

I can’t believe that I’m finally done playing DRAMAtical Murder, this was my first ever BL game and the first game I ever reviewed here on Nice Job Breaking It, Hero. When I first played Koujaku’s route all those months ago, I never imagined I’d get so attached to these characters and their respective routes. Each character is unique with their own quirks and nuances, which in most cases were showcased very well in the individual routes. I will admit that some characters were not as well presented as others in their respective routes, but I was pleased with the overall progression nonetheless. Of the available stories my ranking (best to worst) is as follows:

Overall I highly recommend this game, the art is gorgeous. The backgrounds, CGs, and sprites are well designed and beautifully rendered. The music with its edgy style is a perfect fit for the overall mood of the game and the individual tracks for the bad endings are simply divine. My favorite tracks are Ai Catch and Only there is a free end, but they are all really great. I love the DMMd boys, and I can’t wait to see more of them in Re:connect and other Nitro+ media. This is an outstanding game, I definitely give it my seal of approval!