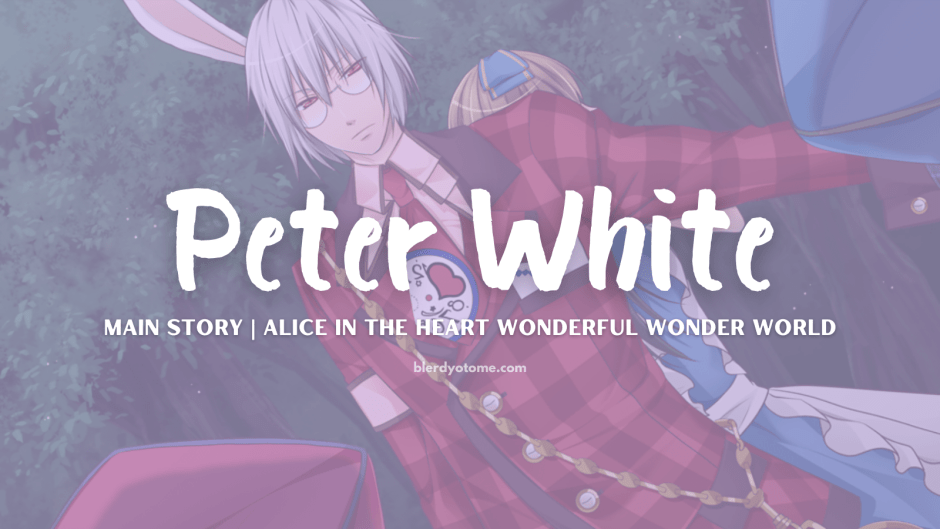 The localization of Alice in the Heart has not been received favorably by many fans. I’ve read several reviews and rants about its many shortcomings. Many have called the game half-assed, drawing attention the poor translation quality, hastily edited CGs, and lackluster writing. For me this is my first ever Quin Rose game (I’m a Quin Rose virgin 😉). So I may be a bit more forgiving of shortcomings in the game. I’m not going to go into a lot of detail about the gameplay as a whole. For that check out my earlier post about the game HERE, where I give my first thoughts about the game, the review covers the prologue. For my first playthrough I decided to go with Peter White.

Edit: On September 25, 2015 QuinRose’s parent company Artmove ceased distribution of ALL QuinRose games. The game has been removed from all mobile app stores! Despite this I hope you enjoy this review!

Thoughts on Peter White: The White Rabbit has a Black Heart

In the beginning, Peter is the ultimate stalker with a crush, who finally decides that he can’t and won’t live another day without the object of his obsession. So he does what any normal person in love does, and kidnaps and drugs his lady love. I, in no way condone kidnapping or drugging people just for the heck of it. But Peter is a complicated character.

While he may be all smiles and sunshine for Alice, he is cruel to everyone else. In fact, he hates everyone and everything but Alice. He doesn’t hesitate when pulling out his gun on maids, soldiers, and just about anyone that pisses him off. At one point he’s having a conversation with Alice in the gardens of the Castle. When a soldier informs him that the Queen wants to see him, Peter stops mid-sentence and shoots him in cold blood without even batting an eyelash.

He then turns back to Alice all smiles, like he didn’t just shoot a man a few seconds earlier. This isn’t the first time, nor is it the last time Peter actually kills or threatens to kill someone. The maids are terrified of him and go out of their way to avoid him when they can. But this becomes increasingly difficult when Alice starts working with them. There are a couple of times when Alice wonders if he isn’t a black rabbit, because of his cold attitude towards everyone.

Oh, and don’t call him a Black Rabbit to his face. It’ll be the last thing you say. On top of everything else, Peter doesn’t even get along with his fellow role holders within Heart Castle. He constantly undermines and snipes at the Vivaldi, the Queen of Hearts. To the point that some within the castle believe that he is secretly plotting a hostile takeover. He is especially cold towards Ace, the Knight of Hearts, with whom he argues with whenever they are in the same room together. If I could sum Peter up, it would be with the following quote:

“I’ve been playing MMOs a long time, and if there’s one thing I’ve learned, it’s that lions do not concern themselves with the opinions of sheep. Just take that little voice in your head that chose to be tactful and understanding, and shoot it. Shoot it in the god damn face.”

Despite his cold disposition, Peter’s good looks have garnered him a number of admirers both inside and outside of the castle. But, Peter doesn’t care much for the opinions of others, rarely even associating with people. The only person he generally enjoys being around is Alice, and to a large extent, she is the only one to curb his bloodthirsty whims. He takes a 180, from hardhearted killer to obsessive, mildly yandere Alice-sexual. He gets downright stalker-ish at some points. Wherever Alice is, he’s there too, waiting to profess his love to her. He says it so much, that it starts to lose meaning. I even began doubting his sincerity, I mean, it was like a weird ritual, like if he said it enough Alice would return his feelings.

Then there was the way he’d switch between his two personalities at the drop of a dime, that had me trying to figure out which persona was the real Peter, it was surreal. So I didn’t blame Alice for trying to keep her distance. Hell, I’d run like hell if I ever met a man like Peter in real life. But, as I kept reading, I began seeing just how alone Peter really was, which made his love that much more unnerving. It wasn’t until I heard about the True End, that it all made sense. I won’t spoil it for you, but rest assured there is indeed a reason for his obsession.

Peter’s whole world seemed to revolve around Alice. No matter what she did to him or said, the sun would always rise and set on her butt. His love seems to exist without any rhyme or reason, she is his unicorn, his everything. And he’ll do everything in his power to keep her by his side, even if it means smothering her. Peter loves like a child, it’s a genuine, obsessive, all consuming love, but it’s all that he knows. Some people will view the romance between Alice and Peter as a captive falling for her captor. But for me it’s more about understanding that people have different ways of loving. Sometimes it’s passionate, sometimes it’s slow burning, and sometimes it’s an obsessive all consuming love. As long as its genuine and mutual love can find a way.

Thoughts on Alice: Alice is a Wolf in Sheep’s Clothing

Alice is a strong independent woman, who don’t need no man… She is a very self aware young lady, a true realist. She’s having none of Peter’s BS, and for most of the game she treats him like her personal punching bag. Alice is a complete jerk to Peter, frequently hitting him and even going out of her way to tell him off or downplay his genuine(?) feelings of love. In the beginning, I don’t blame her, because as far as she is concerned, he’s a dangerous stalker. Alice does her best not to let her guard down around him. But because of his position as Prime Minister of the Country of Heart, its a bit unrealistic. Armed with power and influence, there is no way Alice can completely avoid him.

Besides, Peter always seems to find out where she is at all times. Initially, Alice doesn’t believe Peter when he tells her he loves her. She compares his affection to that of a child’s. Noting that Peter, like herself can’t truly love anyone, because he has never known love. News flash sweetie, no one really knows what love is, I mean what did she expect, he is a white rabbit.

Through the Looking Glass

I have mixed feelings about Peter White, I want to like him, I really do, but he wasn’t the one for me. It makes me a little sad, I was more attracted to the stone cold killer Peter, maybe if I got to see that Peter a bit more often *swoon* this route would have been perfect. I know this doesn’t make sense, but he seemed less crazy when he was holding someone at gunpoint. Everything is clear when there is a gun in his hand, he has a purpose and I like a man on a mission. It’s like expecting the Hulk and getting Bruce Banner instead, don’t get me wrong, Banner is great, but Hulk gets the job done.

I have mixed feelings about Prime Minister Peter White…For one he’s a megane man, which may have influenced my decision to play him first, but Peter is the complete opposite of my type. He is madly in love with Alice from the jump, which at times can be a bit suffocating, his affection was a bit too pushy for me. I found that I liked cold, cruel Peter a bit more than I liked overly affectionate Peter…. While I did get Peter’s Best Ending on the first try, the translation made it a little hard to understand…so I had to play his route a second time for the sake of clarity.

Do I recommend Peter’s route?

Meh, if you’re into yandere types, then he is the man for you. For me there just seemed to be something missing both from the romance and the actual plot, which is why I suggest playing every ending. Otherwise you will be left with a couple of questions, namely why the heck Peter loves Alice so much. The Best Ending, doesn’t explain anything, there are some flashes and hints, but nothing substantial.  All in all, I like Peter, I appreciate a strong opinionated heroine, but he lets her get away with too much. There are no appropriate system of checks and balances in their relationship. In the end it seems like Alice bends under the weight of Peter’s affection, rather than a more natural romantic progression.

Feel free to comment, I love discussions and I’m open to other people’s opinions! But most importantly, Happy Playing!

2 thoughts on “Alice in the Heart | Peter Review: My Lover is a Deranged Rabbit”