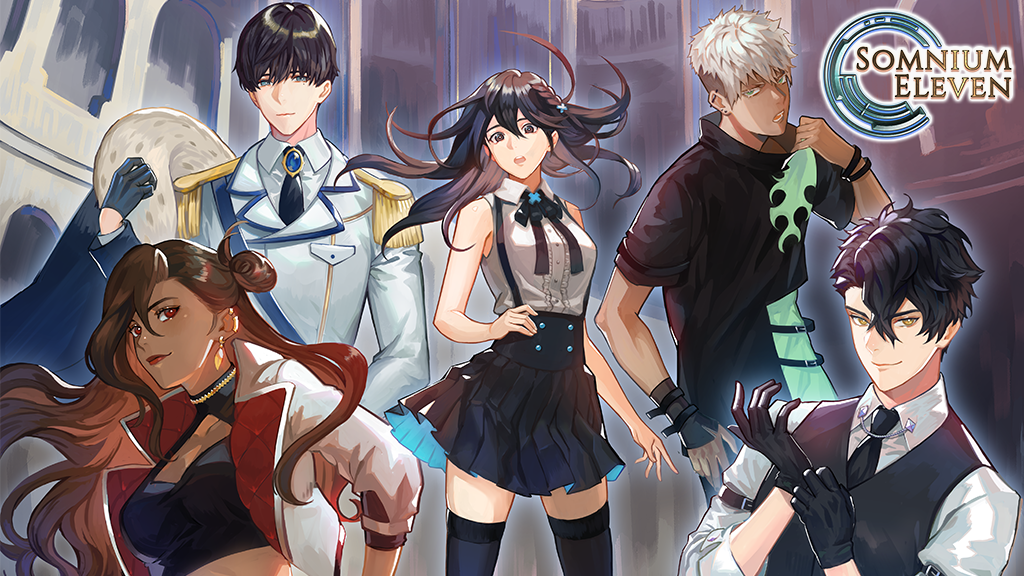 Somnium Eleven is a magitech, isekai visual novel adventure game developed by Nochi Studios, the folks behind the cooking visual novel Sifting Thyme. Follow Aria as she competes for a chance to win the title of Sun of the Empire, along the way learn about a rich magitech world and befriend/romance your fellow competitors. Thanks to the lovely folks at Nochi Studios I had the opportunity to play the game early during the early closed beta and y’all I am blown away by this game!!

In the middle of a school exam, jaded student Aria awakens to find herself in a mysterious colossal empire where magical technology thrives, and its citizens whisper legends of a patron god who watches over their world. To her surprise, she has already been selected as one of the candidates to compete to replace the imperial prince Soren, whose days are numbered as the result of an unfortunate magical accident.

As per the empire’s decree, the candidates must undergo three perilous trials to prove their wits and merits to ascend the throne should they survive. Competitors hail from all parts of the empire with aspirations of their own.

Faced with no other choice, Aria must now strive to train alongside other competitors, build her arsenal to gain support from the people, and use her wits to win the title as ruler for the only way to return home lies in the powers vested in the throne.

As far as heroine characters go, I really like Aria so far. Like most mobile games she doesn’t have an on screen avatar, but you can see her in CGs. While your choices guide her personality and actions, I had a lot of fun with the choices I could make, which ranged from sassy to playful to understanding and kind. Even without an established personality (at least where I am in the story) the in-game choices more than make up for it.

Explore the world and visit various locations through the interactive map! Each location has it’s own benefits and offers opportunities for random encounter other characters and love interests. Visit the Librarium to increase your knowledge, stop by the Forum and interact with fans and boost your social media standing with an impromptu meet-and-greet, or relax at the Aqua Vita spa!

The game has it’s own in world time—Morning, Afternoon, and Evening— during which you can visit three locations a day (so plan your day accordingly). Though there are special items that roll back the clock one turn to give you extra opportunities to visit more locations.

There are also missions and quests that you can complete during your gameplay. Completing them will earn you rewards that range from items to stats boosts. From what I’ve seen so far, you don’t have to complete all the missions or quests, but doing so does make making it through the trial easier. Missions reset on Sunday, while Quests reset every 15 days (in-game).

Similar to Nochi Studio’s previous game Sifting Thyme, there is an interactive in-game social media feature that players can use to interact with other characters via DMs or boost your status by making posts of your own. You can even visit the profiles of other characters to learn about their likes, dislikes, and frequented locations to help build up your friendships and even romance. Occasionally you’ll even unlock special CGs and images from the social media posts you see.

You can also give items to other characters to improve your relationship with them: give them items like their favorite flowers, books, snacks, etc. You can buy items from the Shop using in-game currency, so play around with items and see how your relationship develops!

There is a bit of stats-raising in Somnium Eleven, but thankfully it isn’t as intense as some of the other games I’ve played. Some of the in-game choices and actions are tied to one of four key stats: Knowledge, Proficiency, Stamina, and Charm. Maintaining your stats will help you take on the trials you will face in the competition to become the emperor. Visit Volturna Gymnasium to work out and improve your Stamina or you can even visit the Shop to purchase items to use on yourself: consuming special books and snacks will boost specific stats.

In Somnium Eleven you are attempting to become the next emperor, which is more or less the ruler appointed through a grand competition. Participants take on three dangerous tasks that will test their endurance, knowledge, and skills. The individual that makes it through all three trials win the right to rule. During the game you will need to actually participate in the trials in the form of a mini-game. This is where the stats come into play, since whether or not you have certain attributes will determine whether or not you will survive—yes, you read that right, survive.

The trial isn’t anything too complex, you encounter different scenarios (kind of like checkpoints) and if you meet certain stats goals you will make it through that scenario successfully. During one scenario I encountered a chest that was actually a monster, and because my Knowledge wasn’t high enough, Aria interacted with it and it attacked her. Trust me when I say, you want to make sure you keep an eye on the stats—I died during the first trial because I neglected my stats…

Follow Aria as she competes for a chance to win the title of Sun of the Empire, along the way learn about a Strata, from it’s rich lore and worldbuilding to the people who live there. Get to know your fellow competitors, and while romance is one of the main goals, you can also foster friendships with other characters too! All of the characters are great and I really enjoyed spending time getting to know everyone regardless of whether or not I could pursue them romantically—Roman especially is the himbo bae of my dreams. Also, I am here for the diversity! Somnium Eleven has lots of great fun character designs.

Unlike their first game, the characters in Somnium Eleven are a bit older and have their own unique personalities and motivations. As you get closer to them you get more insight into their reasons for participating in the competition. All of the love interests are great: Valentia is confident and self assured, Titus is the total package (gorgeous and a strong sense of duty), Aram is a a bit standoffish and spicy (but mama likes a challenge), Soren is the current leader and super wholesome and sweet (tragic cutie). Of the love interests, of course I have my favorites: Titus and Aram. Titus is dripping with sex appeal and Aram is like a feisty kitty—he just needs a little love.

It’s no secret that I’m on the fence about free to play mobile games because I have been burned in the past. Somnium Eleven is a freemium mobile game, so you have the option to make in-game purchases for coins which you can use to boost stats or gift to other characters. While Somnium Eleven does have in-game purchase options, Nochi Studios does make it fairly easy to earn coins with out spending money. If you visit the Temple you can either earn coins (anywhere from 5 to 30 coins) by watching ads. The ad-pulls are random, so you don’t know how many you’ll get until after the ad, but if you grind you can make bank (I didn’t see any limitations on ad-watching coins in my playthrough).

I’ve said before that I am not really big on mobile games, because I have a really hard time keeping up with them, BUT, I really enjoyed Somnium Eleven. I had the chance to play the game during the closed beta and I am really impressed with how far the team has come since their first game. While it is technically a visual novel, there are a lot of great interactive features that will make for a much more engaging experience. Visit the various locations around town, interact with characters, explore the in-game social media, and more—you won’t lack for things to do.

The Verdict: Is Somnium Eleven Worth Playing?

Despite my reservations about freemium otome games, I wholeheartedly recommend giving Somnium Eleven a try! I’m slowly making my way through it, but the gorgeous visuals, fun interactive features, and interesting worldbuilding make for an impressive second run for Nochi Studios and I can’t wait to uncover all there is to see in Strata! So, definitely give this game a play, you won’t be disappointed!

Get to Know Nochi Studios

Thank you to Nochi Studios for providing early access to Somnium Eleven for this review.