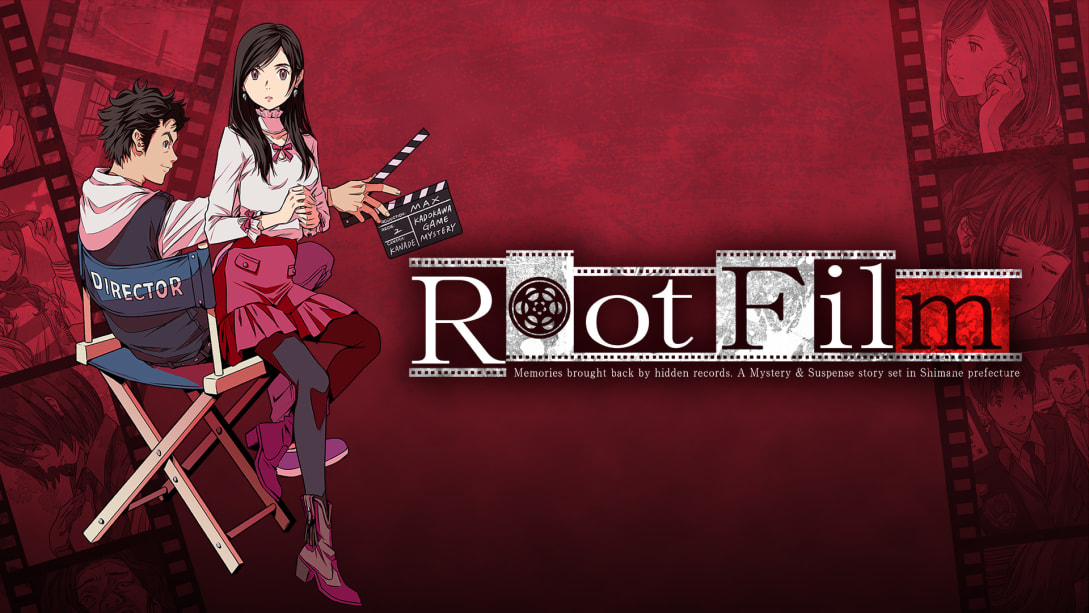 The story of Root Film is split between two perspectives—up and coming film director, Rintaro ‘Max” Yagumo and newbie actress, Riho. Each path offers their own unique mysteries to solve and a revolving door of characters (some of whom appear in both paths). Take on the role of an amateur detective and investigate each thrilling case—travel to various locations around Shimane prefecture and collect clues by chatting with a host of colorful characters. With the game’s Intuition feature collect key words and phrases that will be important during Max Mode, a fighting-game like sequence where you square off against suspects armed with the evidence you’ve gathered your playthroughs. 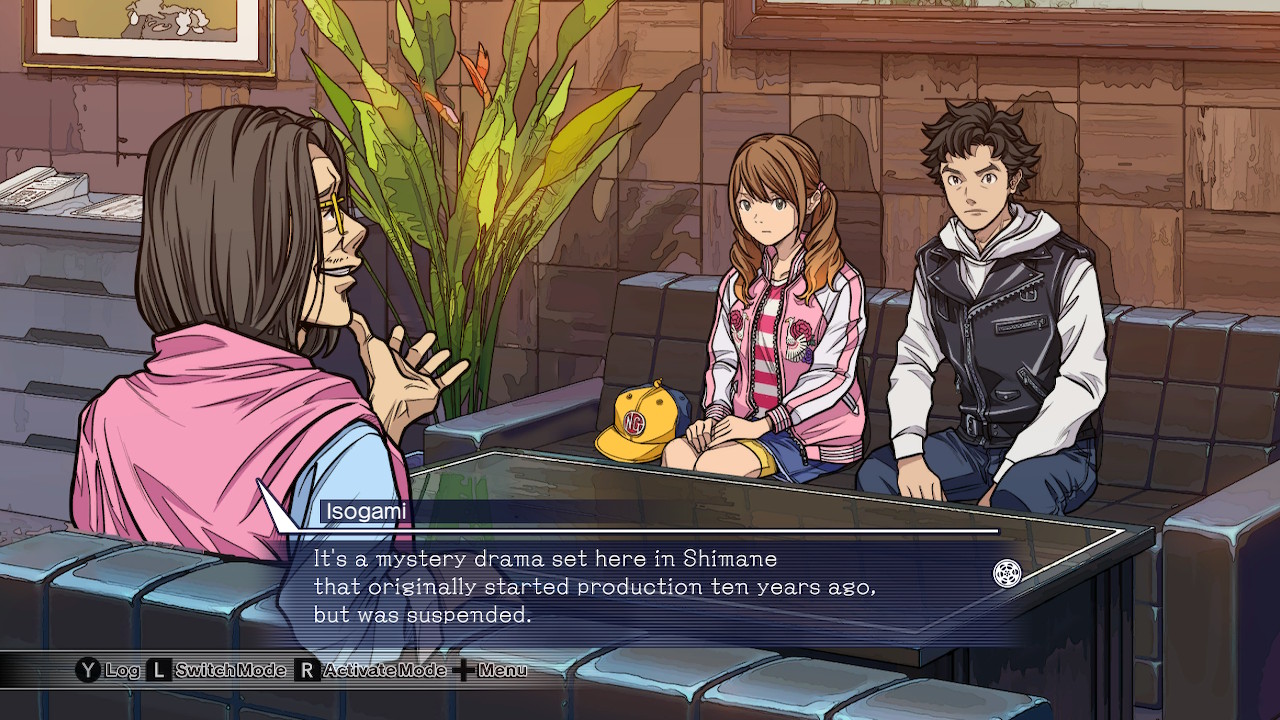 Rintaro Yagumo is an up and coming director and owner of the independent studio, Studio Yagumo. He operates under the pseudonym, Max Yagumo and makes a living cranking out low budget supernatural DVDs—he recently won prizes at the 6 Minute Film Festival and the Asian Film Convention, garnering some attention within the film industry. It seems like his star is on the rise, when he is selected to be the director for the rebooted “Shimane Mystery Drama Project”, a TV series which was cancelled for an unknown reason 10 years ago. His excitement for this amazing opportunity is quickly curbed when a horrible murder interrupts their location scouting process. Now, he and his crew—spunky assistant, Aine Magari, quiet cameraman, Kamane, and newbie idol, Hitoha Amakata—will need to look into Shimada’s past and uncover it’s secrets if they’re ever going to get to the bottom of this thrilling murder/mystery.

Riho is a popular upcoming actress and Max’s younger sister. Despite being a complete newbie, she has made quite the name for herself in the industry, due to her captivating looks and natural acting chops. She is invited to Shimane to play the leading role in the rebooted “Shimane Mystery Drama Project”. But, when she arrives she finds that she and her manager, Shoko Manabe become embroiled in a real life murder mystery and together they will need to keep their wits about them if they’re ever going to get to the bottom of it! 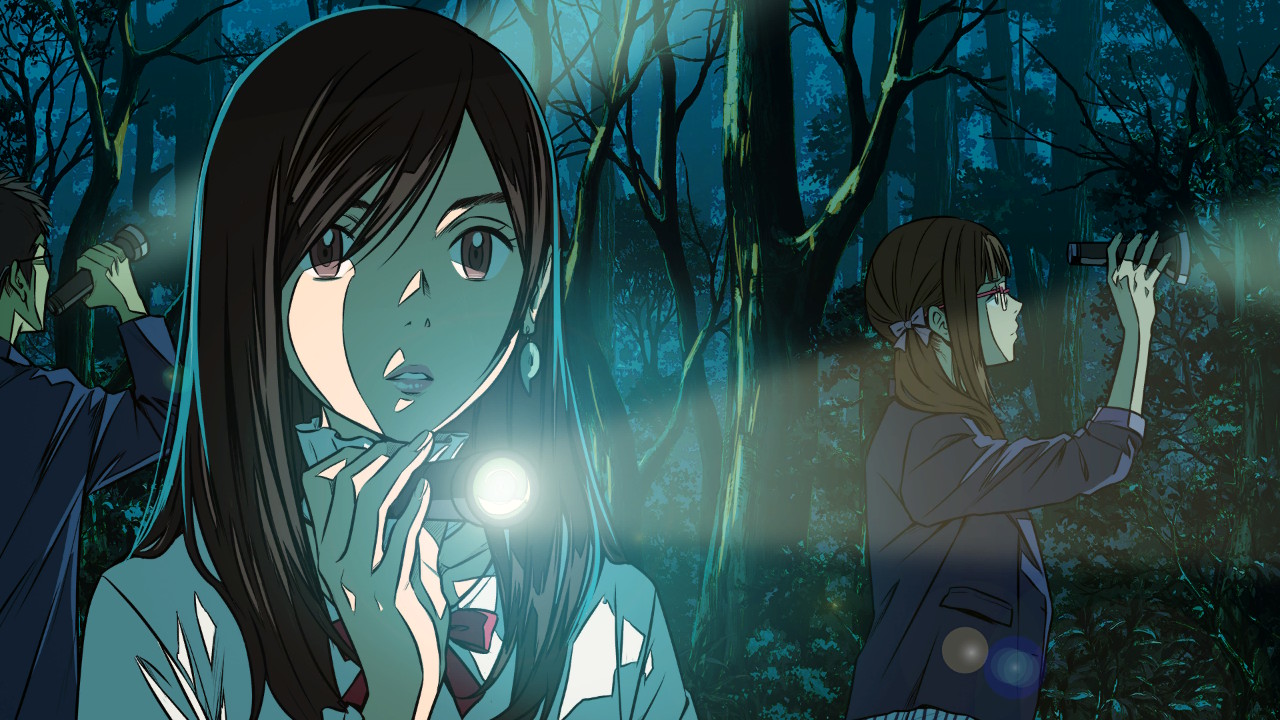 Root Film is more of a spiritual successor to Root Letter, as opposed to a direct sequel. You can play as either Max or his sister Riho and I like that each path offers its own unique casts of characters and mysteries to solve. The whole thing has a bit of an episodic anthology feel to it, with each new chapter focusing on a different self contained murder mystery, from the death of a man in a locked room to an apparent lover’s suicide, if the circumstances are suspicious, chances are it’s probably murder. As an avid fan of the Ace Attorney series and Hotel Dusk, I have to give it to the writers—they definitely came up with some pretty interesting murder scenarios. Each mystery drops bread crumbs that all lead up to a much bigger overarching mystery and I’ll be honest, it’s clear that a lot more effort went into Max’s stories when compared with Riho’s path. Not only does Max’s path have five mysteries to solve (Riho’s only has two), but there are plot points from the earlier chapters that become very important in his final chapter—and believe me when I say don’t overlook anything. Even an offhand comment between a character in chapter one is suddenly a huge revelation in the finale. There were moments where Root Film had me on the edge of my seat and trust me that ain’t easy to do.

Like Root Letter before it, Root Film takes place in Shimane prefecture and the game takes full advantage of the area’s rich historical locales recreating them as the backdrop of this thrilling mystery adventure. Local businesses, cultural landmarks like Matsue Castle and the Miho Shrine, along with regional festivals—the Heron Dance festival is the main attraction in Chapter 2 of Max’s path—and folklore are all lovingly recreated in Root Letter to make for a much more immersive gameplay experience. Most of us aren’t really traveling right now, but while ferreting around the Shimane prefecture in search of clues I really did feel like was right there alongside Max and Riho taking in the sights and sounds of the area. Many of the game’s backgrounds consist of rotoscoped images of Shimane prefecture locales and while I’d normally be opposed to this, the fact that Shimane is very much an integral part of the story, it only stands to reason that Kadokawa let the beauty and rustic charm of the area shine through on its own.

But, where Root Film really shines is with it’s dynamic cast of characters from the lowkey sleazy film exec; Hiroyuki Isogami; to the flashy and quirky mystery writer Kana Hatuse; to Aine Magari,  Max’s foul-mouthed tomboy assistant. Each character brings their own unique charm to the story and trust there are no bit parts among this ensemble cast. Every character no matter how small has a voiced role, though the vocal cast is nothing to sneeze at; Max’s VA, Komada Wataru has done extensive anime voice over roles and lends his voice to Nagusa in the otome game, Olympia Soiree. Aine’s VA, Yu Serizawa is a member of the idol group, i☆Ris along with voice work on a few notable anime series. And that just scratches the surface of Root Films stellar all star cast which along with the musical accompaniments makes for an immersive auditory experience.

There is one thing that I feel obligated to mention and that is the localization. I want to say this, the localization is good– there were some liberties that they took to make the dialogue feel more modern (“Showa-era boomer” being one of the more… interesting inclusions) and I definitely found myself laughing at the witty banter between Max and Aine. However, there were quite a few noticeable typos that really hurt an otherwise beautiful story—stuff like the names of places being botched; one of the restaurants is called both Restaurant Bear and Restaurant Pear  and I was left scratching my head (It’s totally Pear… at least I think it is…); and little things like “your” being used in place of “you”. Again, it’s not so bad that the game is unreadable (most of the time my brain auto corrected for typos), but it was enough that I felt like I need to say something about it (especially since PQube is going to be localizing Bustafellows and I know how otome fans get about translation).

Now, the gameplay, Root Film is a visual novel, so if you’re not one for a lot of reading this is probably not the game for you. Much of the gameplay involves traveling to various locales around Shimane Prefecture in search of clues or interrogating witnesses/suspects in whichever of the mysteries you’re attempting to solve at the time. It definitely has a very Ace Attorney vibe to it (Capcom, were is my new Ace Attorney Switch port?!), which I greatly enjoyed—there’s no better way to get to know your characters and setting than by sleuthing around town grilling defenseless civilians~ But, Root Film does have an interesting mechanic; while investigating key phrases can be remembered and stored by either Max and Riho, through an ability called “Synesthesia” (which is a very real condition where a person experiences one sense and a completely unrelated one is triggered at the same time). Here, though, it manifests as both Riho and Max seeing key phrases floating in the air, which they tuck away in their memory vaults for use during the climactic confrontation scenes later on in the chapter. Once all the clues have been gathered you can confront a suspect and use the phrase you’ve been collecting over the course of your investigation to poke holes in their story—and if you’ve played any of the Ace Attorney games, it’s very reminiscent of the courtroom brawls between Phoenix and Edgeworth.

While I loved investigating, I will readily admit that bouncing from place to place did get a bit repetitive at times and it’s not always clear where you’re supposed to go to unlock new clues.  There were times where I was just blindly revisiting all the locations I’d unlocked in hopes of getting back on track, but I wasn’t opposed to using the Skip feature either… Like Ace Attorney, I did like that the game doesn’t let you move onto the accusation scene unless you have collected all the clues you need to actually win it, so there are no worries about getting stuck. But, don’t let that fool you, each case has plenty of challenges to keep even the most seasoned mystery buff entertained!

The Verdict – Is Root Film Worth Playing?

So, the verdict; I absolutely loved Root Film! It’s been ages since I played a really good mystery game and Root Film definitely helped scratch that investigative itch—fans of Ace Attorney and Danganropa will love the immersive mystery adventure, while visual novel fans will love the rich historical locales and quirky characters!

Of course the game isn’t perfect, the typos were a bit of a bummer and there were some instances where I’d have liked a bit more guidance on where I need to go for clues; but that aside, the phenomenal storytelling and thrilling mysteries more than overshadow what in comparison are mild inconveniences. So, yeah, I totally recommend giving Root Film a play if you have the chance, it’s a whole hell of a lot of fun and even as a seasoned mystery buff, the adventures of Max and Riho always kept me on the edge of my seat!

Thank you to PQube for providing a copy of Root Film for this review.