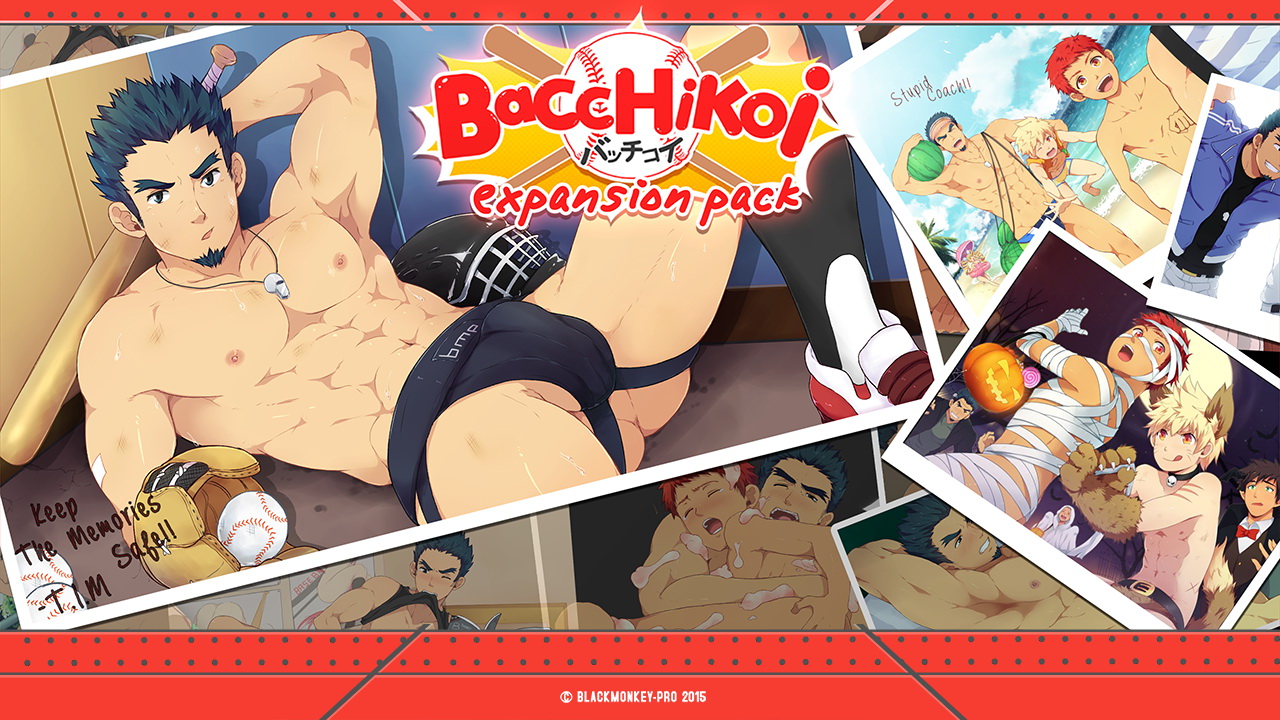 So, I know some of you are wondering how in the world am I going to review an expansion pack, since it’s not really a game. Well, to that I say, *ahem* the Bacchikoi Expansion Pack is really just an overpriced fandisk, so I had no problem eking out a review and for what I paid for it, you better believe I’m writing a review! This game cost about as much as some real games…

I must be a glutton for punishment, because here I am talking about yet another Black Monkey Pro title, at least this time, it’s an expansion pack and not a full game… thank God! I don’t think I could actually put up with another BMP game, I just can’t… If you don’t remember how I felt about the previous Black Monkey Pro games I highly suggest reading my reviews for Sleepover and Bacchikoi and relive all the magic and wonder that is Black Monkey Pro, but forewarning those are NSFW reviews!

*Disclaimer: I don’t own the images used in this review, all CGs and screenshots belong to Black Monkey. Since this game is NSFW there will be some NSFW images after this point. I tried my best to hide some of the naughty bits, but… *shrugs* you’ve been warned!

Edit: In October of 2016 Black Monkey Pro disbanded, so Bacchikoi and all of their other content is no longer available for purchase, but feel free to still give this review a read!

Coach Genji steps up to bat?!

Do you all remember when I said that both Sleepover and Bacchikoi were “smut without plot” and “glorified CG Set”? Well, while I stand by what I said 100%, I have to say that the Bacchikoi Expansion Pack, is on another level! Unlike the previous titles, there isn’t even a semblance of a plot nor are there any choices to make. The entire expansion pack is a series of short episodes and re-imaginings (11 total) of events that occurred during the main game, but this time the burly bara-esque coach, Genji gets a taste of the action.

First, I have to say this: I DO NOT condone grown ass men engaging in sexual acts with minors… *sigh* especially, when said adult is a big burly sports coach and two of the minors in question look like they should be in elementary school… it just ain’t right! Second, Genji’s sexual appetite is insatiable! I guess all that horny teen juju must have rubbed off on him because the guy will literally pork anything that stands still long enough and because Genji is a man, he can go at it multiple times in a row without getting tired… facts!

Each of the eleven episodes feature a steamy sexual encounter between Genji, Toshu, Ichiru, and Masaru. It’s like someone put all of their names into a random name generator and just wrote scenes for whoever was paired up, which for the most part worked out pretty well. Since Toshu isn’t the protagonist in the pack, the BMP team was able to explore every possible pairing option, and even I can admit that the Masaru x Ichiru pairing was kind of cute. However, I couldn’t help but feel especially dirty watching Genji pork either Toshu or Ichiru… they are just so small and childlike and Genji is this big hulking beast of a man, I felt like he was going to rip the poor kids in half with his giant member. At least when Genji was paired with Masaru it wasn’t as cring-y, since Masaru is much more sturdy, than either Toshu or Ichiru, since I more or less consider him a top (though when Genji is involved, everyone is a bottom).

Out of all the individual pairings, I feel like BMP really liked the Genji x Ichiru pairing the most, since all of their scenes together seem to be the most well thought out. When I played the main game, I noticed that there was a little something going on between Genji and Ichiru that went beyond a normal coach/player relationship, so to see them actually act on all that sexual tension in the expansion pack was interesting to say the least. Though the fact that Ichiru sees Genji as a father figure severely tainted any enjoyment I would have otherwise gotten from the consummation of their relationship. It’s one thing for Genji to pork his student, but another thing entirely for Genji to pork someone he thinks of as a son…. it’s not okay, it’s borderline incest!

Baseball is a TEAM sport!

Of course the smut scenes aren’t just reserved for one on one interactions, oh no! In the Bacchikoi Expansion Pack, everything is up for grabs and that includes GROUP SEX SCENES! Yes, y’all read that right, group sex scenes…. I don’t know how I was supposed to feel about the group scenes, on one hand they are kind of cool, but then the more rational side of me kicks in and I’m sitting there trying to figure out how the hell they are managing to pull off such complicated positions without hurting themselves… I know this is a game and all, but there is literally a human centipede like position used in the last episode and EVERYONE participates. And here I am watching the whole thing play out and all I can think is, “Damn, poor Toshu is getting crushed right now”… I mean see for yourself!

How the hell is that even possible?! Oh and I should also mention that they achieved this feat in stages until everyone was in position… so I got to watch this pyramid grow from just Toshu and Ichiru to the magnificent foursome you see above! But, wait there’s more! At some point after they all get into position, a baseball bat comes randomly flying out of nowhere only to plant itself squarely into Genji’s butt, as if this scene wasn’t already ridiculous enough as it is! I think I laughed for a solid 10 minutes at just how stupid this scene was, not that I was taking the expansion pack all that seriously before this point, but really…. a frickin’ baseball bat?! I thought I’d seen it all, but Bacchikoi actually surprised me and I’m not so sure if that is a good thing or not, I’m still not entirely sure this game wasn’t just a figment of my imagination…

The Verdict – Is the Bacchikoi Expansion Pack Worth Playing?

There are times in my life when I look back on all of my game purchases over the years and I seriously wonder what the hell was I on when I bought them. The Bacchikoi Expansion Pack is one of those games… In my defense I bought the pack before I’d even played Sleepover or read any of the reviews for any of the BMP games, so you can pretty much say it was a blind impulse buy… I had no idea the kinds of shenanigans that were in store for me and I can honestly say that if I knew then what I know now, I would have never bought any of them! I can pretty much sum up this and every other BMP game I’ve played with the the same three words:

And I know I have said this before in each of the previous reviews, I love smut as much as the next BL fan, but even I need something other than mindless sex, especially when I’m spending $70 bucks on a game and the damn expansion pack! Yes, both Bacchikoi and the expansion pack put me back a cool seventy bucks (I was an idiot)… Gaaah, just thinking about it gives me a headache… But, since I don’t want this to be a completely negative post, because despite my gripes, I actually enjoyed the expansion pack.

As usual Black Monkey Pro killed it in the art department, this is just a gorgeous looking game, from the CGs to the backgrounds to the individual character designs… everything is just stunning! I am always impressed with the small details BMP puts into each and every one of their scenes, so A++ there! The sex scenes while random as hell, were really well staged, all of the camera angles were perfect and the sheer number of positions, just wow! Those are the two things BMP gets right, art and smut, so I like with the other games I stand by my statement, that the Bacchikoi Expansion Pack would have been better as a CG set and not an actual game (well, kinetic novel). *Side Note: One of the artists from BMP is working on a new game Camp Buddy which I’ll keep my eye on…*

So, unfortunately this is the third strike for Black Monkey Pro (and thank God the last)! While I loved the art and the smut (when it wasn’t utterly ridiculous), it wasn’t enough to warrant me recommending this game, though given that BMP disbanded last year chances of anyone playing this pack are pretty slim… *sigh*