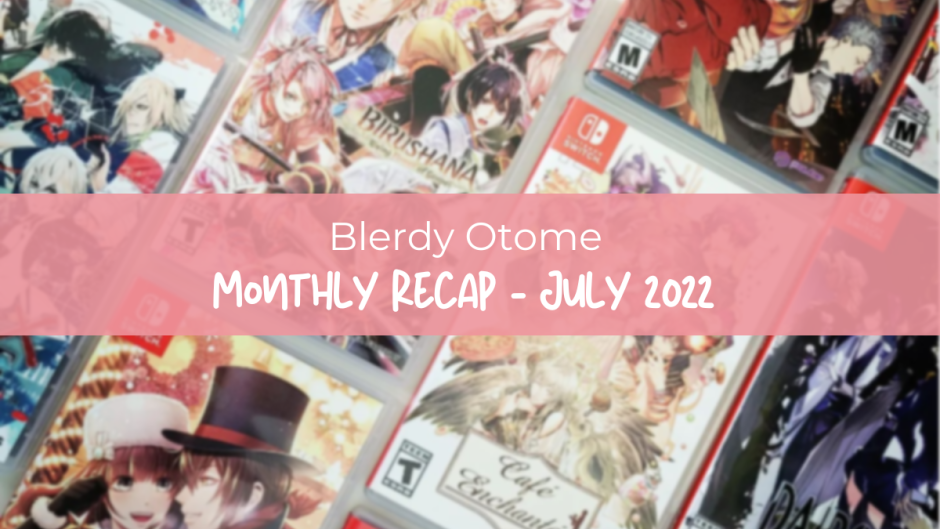 Hey Blerdy Tribe! It’s the end of yet another month, so it’s time for the Blerdy Otome Monthly Recap! I kinda skipped a few months, sorry, I’ve been juggling a lot recently so sadly the site has taken a bit of a backseat. But, I’m going to be better about that in the coming weeks and months. However, some exciting things did happen recently and I wanted to share:

So, there’s been a lot of things going on behind the scenes, so as always thank you all for your support! I can’t express how much your kind words, comments, and DMs mean to me! 💖

As always there’s a lot more on the horizon in August, but before we dive into the new month, let’s take a look back at the month of July here at Blerdy Otome!

UUUltraC is an 18+ BL visual novel developed by ADELTA and localized by MangaGamer for PC (and Steam). Heavily inspired by tokusatsu media, the game is set in 1970s Japan in a world where battles between heroes and kaiju are the norm. In the midst of all this three couples on different sides of the hero/kaiju conflict struggle to live normal lives.

UUUltraC BL Game Review – Do You Wanna F*ck a Kaiju?

Games Played on Stream in July

I’m now on Twitch! Over on my channel BlerdyOtomeGames I play a ton of different games each month. In case you missed my streams here are the games I played this month!

Reviews To Expect in August

I usually just go with the flow when it comes to content here on Blerdy Otome, so it’s kind of hard to pin down what to expect each month. I want to get better at sticking to a “schedule” so I thought it would be good practice to include a section with some of the reviews I plan to write during the upcoming month. Not only will this hold me accountable, but it will also give you all an idea of what to expect to see in the month ahead. Full disclosure, this is not a complete list and there’s a good chance things will change—this is more of a rough draft…

From Around the Reader

With the release of Taisho x Alice Heads & Tails upon us both Danda and Djinny of Ikemen and Chill share their thoughts on TaiAli Episodes 1-3 & the Epilogue! It’s a fun post that’ll serve as a great recap of the story before you head into Heads & Tails!

Like the title suggests, this is a fun post about the ups and downs of liking hot anime guys. From the positives to the negatives, Cheddar spotlights the many reasons these 2D hotties could make anyone a little jealous.

Thank You for Your Support!!

A lot of what I do here on Blerdy Otome is because of the support of all of you amazing readers–whether it’s your encouraging words on Twitter, liking a post or just sharing my posts with others, you guys are the real MVPs!

It’s no secret that buying games and manga for reviews puts a strain on my wallet and while I love what I do, a little extra help goes a long way! Here are the awesome people who gave their support this month!