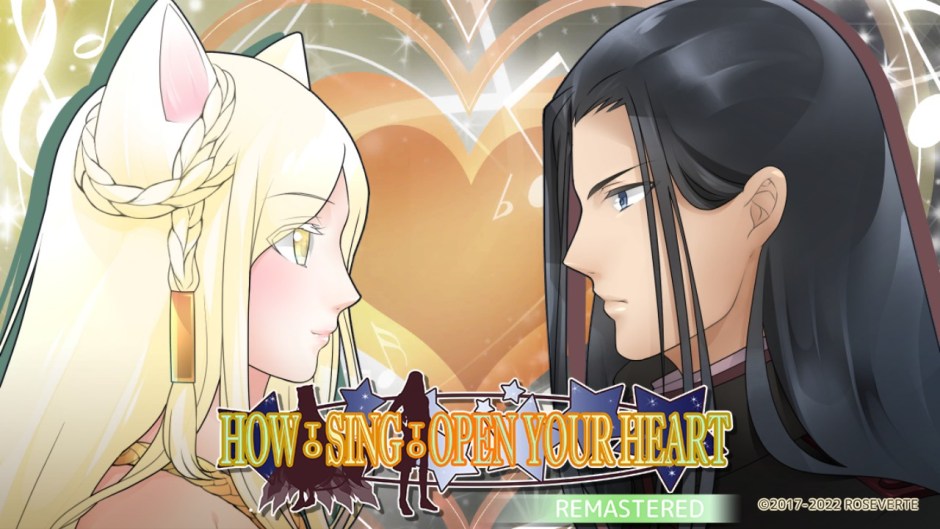 The third game in Roseverte Games’ the Story of Eroolia series, How to Sing Open Your Heart (HTSTOYH) has been is now available in a definitive remastered edition. HTSTOYH is a cute fantasy visual novel that follows cat-eared princess, Myana as she attempts to bridge the gap between her people (the luccretia) and the citizens of Eroolia with her song.

“Can the cat-eared princess’ song rescue her people and find true love?”

Princess Myana loves to sing, and believes she can make her people happy with her song.
This time, she visits the human’s country “Eroolia” as the leader of “Laarz”, the country of cat people.
Relations between humans and luccretias have never been good, and Princess Myana experiences it herself in Eroolia.
Will her song be able to unite the hearts between humans and luccretias?
Or as the imperial guard captain, Ludovic, argues, is it better to completely cut off ties between the two countries?

The princess of Laarz and also the current ruler of her country. She dislikes humans but her encounter with Regina and the others led her to reconsider her opinion.
Her meeting with Ludovic in Eroolia doesn’t stem from romantic reasons and while she has a bad impression of him, Myana cannot hide her continued interest in him.
She loves to sing, and believes that songs have the power to affect people’s emotions.

Captain of the Imperial Guards in Eroolia.
He has a frosty demeanor and doesn’t talk much, but actually loves cute things and is good at cooking. The more nervous he is, the more he will act cold and frightening. This makes him easily misunderstood by those around him.
Ludovic hates trouble and does things at his own pace, like guarding the king from afar.
Will Myana’s song be able to open his heart?

New Features in the Remastered Version

How to Sing to Open Your Heart Review

You May Want to Play the other games in the series

How to Sing to Open Your Heart is the third game in the Story of Eroolia series, following How to Take Off Your Mask (2015) and How to Fool a Liar King (2017). All three games are set within the the fantasy island nation of Eroolia, a place where humans and cat-eared people, named Luccretia coexist. Each game in the series delves into the complex and often tense relations between the Luccretia and humans.

While each title can be played as standalone stories, a lot of characters and plotlines carry over between games. Players of the other games in the series will be happy to see old favorites appearing in HTSTOYH as supporting cast members. So, for the best experience, I recommend playing the two previous Eroolia games before diving into How to Sing to Open Your Heart.

Work for your Happily ever after

In this new adventure, players follows Myana, princess of the Luccretia as she embarks on a diplomatic visit to the kingdom of Eroolia. For years there have been tensions between the Luccretia and humans on both sides. Although Myana is distrustful of humans, for her people she is willing to extend a hand in the name of peace.

Unfortunately things don’t go as planned and Myana finds herself experiencing the negative sentiments of the people of Eroolia first hand. Things become even worse when she meets the king’s cold Captain of the Guard, Ludovic—an anti-Luccretia sympathizer, who wants nothing more than to sever ties between the Luccretia and humans. Despite the worst possible first meeting, Myana finds that she can’t get the brooding (but handsome) Ludovic out of her thoughts.

Meanwhile, renewed anti-Luccretia sentiments in the city threaten their budding relationship. Soon, both Myana and Ludovic find themselves torn between their feelings for one another and their duty to their people. Roseverte loves their “dislike” to love storylines. We see it with Juli and Regina in How to Fool a Liar King and it’s here again with Myana and Ludovic. However, it works a bit better here because the couple’s initial dislike of each other isn’t arbitrarily included for the sake of drama. Rather, it’s directly related to a conflict that has been well established over the course of the series. Which in turn creates believable tension.

Myana and Ludo are the cutest couple

That said, How to Sing to Open Your Heart is a shorter game, about five or so hours of gameplay. So the romance does take off fairly quickly. Within a matter of hours Myana is already crushing hard on Ludovic (and I can’t blame her, he’s gorgeous). Ludo for his part takes a smidge more time to come around, mostly due to his bias against Luccretia. But once he does he is all in for princess Myana.

Their relationship is cute, and I love how despite their bickering, they do open up to each other in ways they don’t with others. For instance, Ludo has the cutest plushie obsession and Myana does become a bit of a tsundere when Ludo is involved. There’s also a bit of a role reversal within their dynamic, Myana is surprisingly more dominant, while Ludo isn’t afraid to get in touch with his more domestic, cutsey side. Myana asks Ludo to be her wife and I LOVE THAT FOR THEM!

In How to Sing to Open Your Heart there are two paths to choose from: Independent and Teamwork. Each offers their own resolution to the story and the relationship between Myana and Ludo. The independent path felt more the canon path. It offers a more impactful story and doing a better job fleshing out the relationship between the main pair. While the teamwork path felt somehow more rushed in comparison.

The Remastered Edition is the Definitive Eroolia Experience

This is the remastered version of the game, so there are a number of improvements that help make for a much more immersive experience. Roseverte has given How to Sing to Open Your Heart a bit of a tune up. Most of the changes are cosmetic like updates to the UI and art, while others like the addition of sprite and background animation breathe new life into the series and characters. How to Sing to Open Your Heart is fully voiced in Japanese, which is a welcome treat in a small game and definitely gives it an edge over other indie projects. The music is amazing, and the opening theme, “Kokouta” which we hear sung at several points in story is gorgeous.

Is How to Sing to Open Your Heart  Worth Playing?

As whole I really enjoyed How to Sing to Open Your Heart. It is a fun addition to the Eroolia series that expands on the story laid out in the previous games. Fans of the series will love to see the cameos from Juli, Regina, Ronan, and Lilia in this game (I especially love any opportunity to see my megane king, Juli again). And the chemistry between the leads, Myana and Ludo is absolutely adorable and I think folks will love following them in this new adventure.

While there were a handful of missed opportunities to update the story. I do think the new art assets and updates in the remastered version go a long way to improving overall enjoyment of the game. How to Sing to Open Your Heart is definitely worth giving a play if you’re looking for a short game to while away an afternoon or weekend with. The story is solid, the characters are fun, and the music is top tier.

Thank you to Roseverte Games for providing a copy of How to Sing to Open Your Heart for this review.