I absolutely love NaNoRenO because it gives up and coming developers the opportunity to make their debut in the game development world and bring their own unique ideas to life. These are usually smaller projects put together by a much smaller team, however, I’ve played quite a few NaNoRenO games in the past that are on par (if not better than) some bigger name commercial releases. You never quite know what you’re going to get with a NaNorenO title, but you can always be sure it will be a one of a kind experience.

So, when Yoshibb reached out to me about their NaNoRenO 2019 entry, My Only Sunshine I was more than happy to give the game a look since the premise was quite unlike anything I have ever seen before: A romance fantasy visual novel involving humanoid versions of the planets. I was intrigued. I’ve played otome games where you date representatives of astrological signs, gods and goddess, but never planets.

Once every millennium, Sun holds a huge gathering of the planetary spirits. While Sun has found herself down in the dumps recently — including a relationship with Terra (Earth) that is on the rocks and what she now considers a largely mundane, solitary existence — she hopes that the get together will brighten things up. However, after Terra ruins her event with his reckless behavior, Sun decides it’s time to play the field and chooses a new planetary partner.

My Only Sunshine is a short game with a lot of great potential. This is definitely one of the better NaNoRenO offerings I’ve played. It’s a bit rough around the edges (most likely due to the NaNoRenO time constraints), but nonetheless enjoyable. With it’s unique premise and well developed concept and characters, there is a lot to like about it. In the game you play as the Sun, a strong confident, and beautiful woman who serves as the life force for the entire universe. Generally good natured, she is admired by each of the planets under her care, though she can be a bit oblivious to their day to day struggles since she has been out of touch with most of the planetary spirits.

Once every millennium she throws a lavish party and invites all of the planetary spirits. At the start of the game, she is planning her newest gala, with the help of her current boyfriend Terra, the planetary spirit of the Earth. Things have been a bit rocky (no pun intended) with Terra for awhile now, but she hopes the party will help change that. Unfortunately this is not the case and Terra shows up drunk and completely wrecks the place. Disgusted with his behavior and fed up with his shenanigans, the Sun can either choose to work on her relationship with Terra or kick his ass to the curb and start fresh with one of the other planetary spirits. 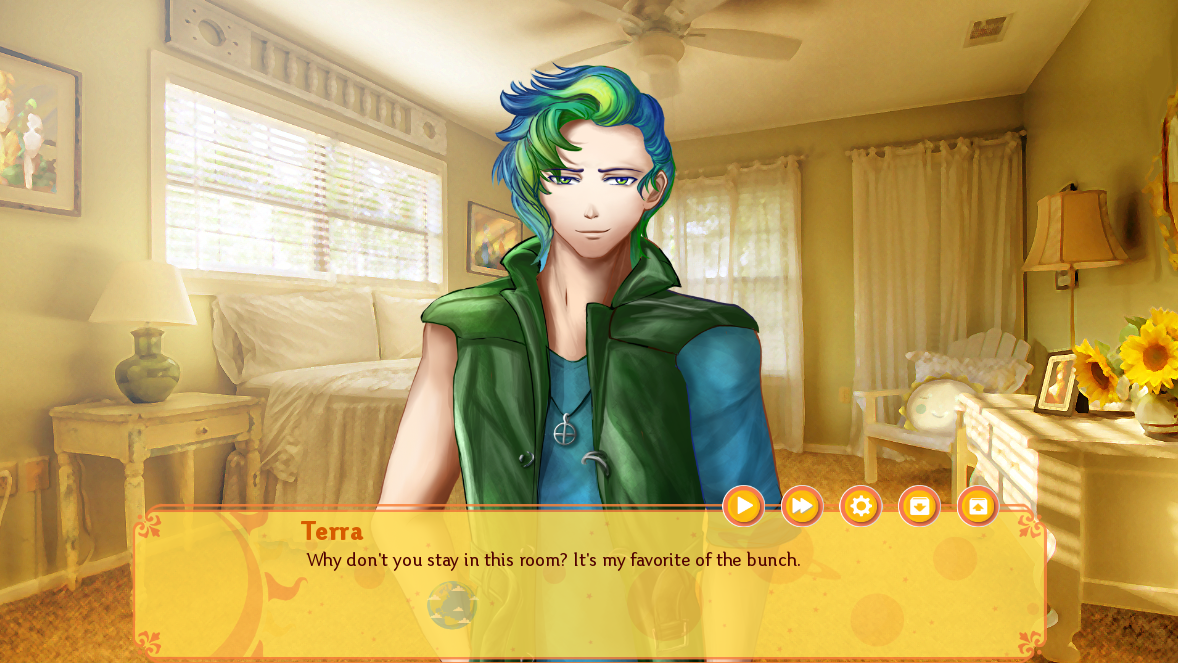 As of this review six of the nine planned love interests are available; Jupiter, Neptune,  Pluto, Saturn, Ur, and Terra are all romanceable. So far, there are two female love interests (Saturn and Neptune) and four male love interests (Jupiter, Pluto, Ur, and Terra). Each planetary spirit has their own unique personalities and storyline that focuses on a key conflict affecting their respective planets, but each route isn’t completely cut off from the other characters.  There are preexisting relationships between each of the spirits, so it’s not uncommon to see a few of them pop up as side characters in each other’s routes. In fact, Venus is Sun’s ex boyfriend so you can bet there is some tension between him and the other love interests (especially Terra) and depending on what you choose, Terra becomes Sun’s ex and lets just say he doesn’t always take being dumped gracefully. There’s a lot of great interplay between the characters that I quite enjoyed seeing since it added depth to the story and world building of the game.

I adore most of the characters, Terra isn’t exactly in my good graces after the stunt he pulled at the party at the start of the game, but even he redeems himself in his own route. The other characters are a nice mix of personalities and characteristics that are pretty fitting with the natures of their respective planets. Jupiter (or Juno as he’s called) is kind of a big brother to the other planets which works well since his planet is the largest in the solar system. Pluto is insecure about its place in the solar system, much like real life disputes over whether or not Pluto should be considered a planet. Mars is temperamental and tough much like her namesake… The moons of the various planets are even included, though they are more like animal companions which is a cute idea. I could go on, the attention to detail with the individual personality traits of the planetary spirits is one of the best parts of the game. What’s more, there is even an in game glossary with facts about the various planets and stars that I found to be very informative.

However, like most NaNoRenO games My Only Sunshine is not without a few shortcomings, though most of these can be attributed to the short game development time. Some of the routes feel a bit rushed or the endings seem a bit too abrupt, though these issues will most likely be addressed in future updates of the game. The art assets are a bit hit or miss for me, while I like the overall designs of all of the characters I did notice that there were a few backgrounds that were borrowed from stock images and others that appear to have been created by the developer. It’s not necessarily a bad thing, just something I noticed, but it was most likely due to time constraints during development. However, I would like to mention that the game is being updated, and many of the sprites have already been overhauled. They are also working on adding voice acting, and from the snippets I’ve heard on Patreon I like what I hear so far!

So, the final verdict: My Only Sunshine is a bit rough around the edges, but overall it is a pretty solid game. The unique premise is unlike anything I have seen before and given the strict NaNoRenO time constraints, the developers managed to pull together a well developed concept with great execution. There are some things that need ironing out, mostly with the pacing of some of the routes but as it stands, I would definitely recommend playing the game if you have the chance. I had a lot of fun with the different characters, though Jupiter is hands down my favorite… Everyone needs a Jupiter in their lives!

But, don’t just take my word for it! Check out the game over on itch.io or take a look at the game’s trailer below! Also consider supporting the team on Patreon, they are working on some super awesome updates!!

3 thoughts on “My Only Sunshine Review – A Romance VN That’s Out Of This World!”