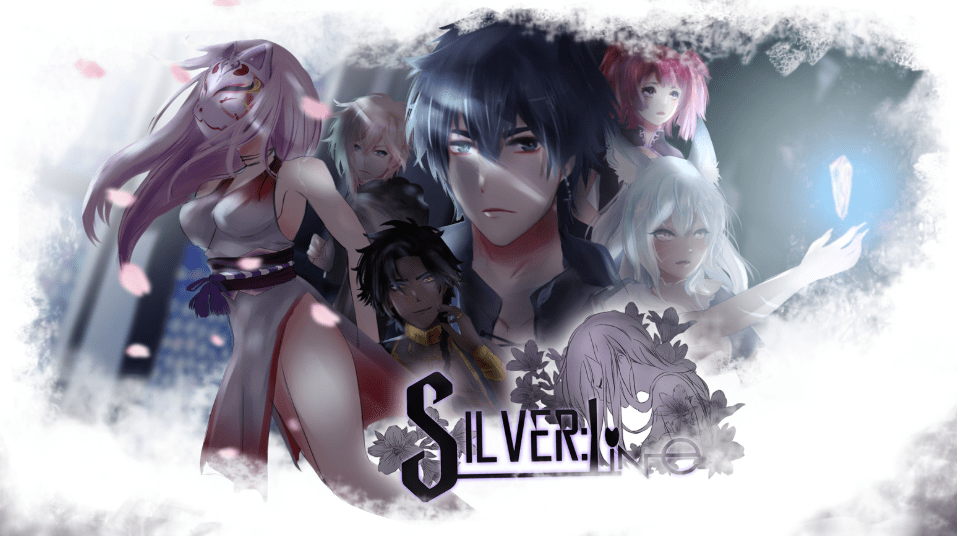 This time around, I’m covering an upcoming fantasy romance visual novel, Silver:Line! I played through the demo this weekend and I am hooked!! It has such an interesting premise and the art is gorgeous and don’t get me started on the characters!! Code V Productions is really giving it their all with Silver:Line and if the demo is any indication, you won’t want to miss out on supporting this amazing upcoming title now!

Silver:Line is an upcoming partially voiced fantasy romance visual novel that offers a absolutely stunning world building, unique characters, and story that will have you hooked!! Unlike most visual novels where you are the main hero or heroine in the overarching story, Silver:Line puts the player in more of a supporting role. It’s the other characters/love interests that take center stage in this richly inventive visual novel.

Silver:Line will be a commercial release, supporting the Kickstarter at the S$35($26 USD) level will get you a copy of the game upon its release.  The game will be available for Windows, Mac, and Linux.

Silver:Line offers over 10 hours of immersive gameplay! Your choices throughout will determine the course of the story and the path each of the characters follow as you delve into the unique histories of each of the main characters. Silver:Line offers an interesting twist on the usual player-centric narrative that you seriously won’t want to miss out on!

Unlike other visual novels and games where your gender is decided from the start, Silver:Line gives players the chance to choose between a male or female protagonist. Regardless of which protagonist you choose, all of the available love interests will be open to you (both male and female).

In an effort to bring the world of the game to life, all of the character sprites in Silver:Line are animated using Live2D. So rather than looking at static images each of the characters have minimal movements from blinking eyes and hair movement to shifting poses.

In addition to that, the vibrant and colorful artwork brings the fantasy setting and characters are absolutely stunning to look at!! From vibrant cities and towns to lush forests, the world of the game is filled with various locales. The character designs are each unique to the fantasy setting from knights with armor to half human characters and even a shinobi!

Further immerse yourself in the world of the game with partial English voice acting for all of the main cast and side characters. Currently the demo of Silver:Line is fully voiced and the devs would plan to have the final product fully voiced as well if the KS campaign reaches the S$35,500 stretch goal!!

Code V Productions has set their campaign at a S$23,00 funding goal ($16,998 USD) and they still have a ways to go before they meet it (the campaign will run until July 29th 2019). There are a number of perks for supporting the Kickstarter campaign and a wide range of pledge tiers for just about every price range! Below are some of the perks you can expect if you decide to lend your support!

Where to Find Code V Productions

If you still aren’t convinced to support this game, I highly recommend checking out the demo, which covers about 2 hours of gameplay. Like the final release, the demo is available for Windows, Mac, Linux and Steam!

You can also contact Code V Productions on Social Media through the following channels: