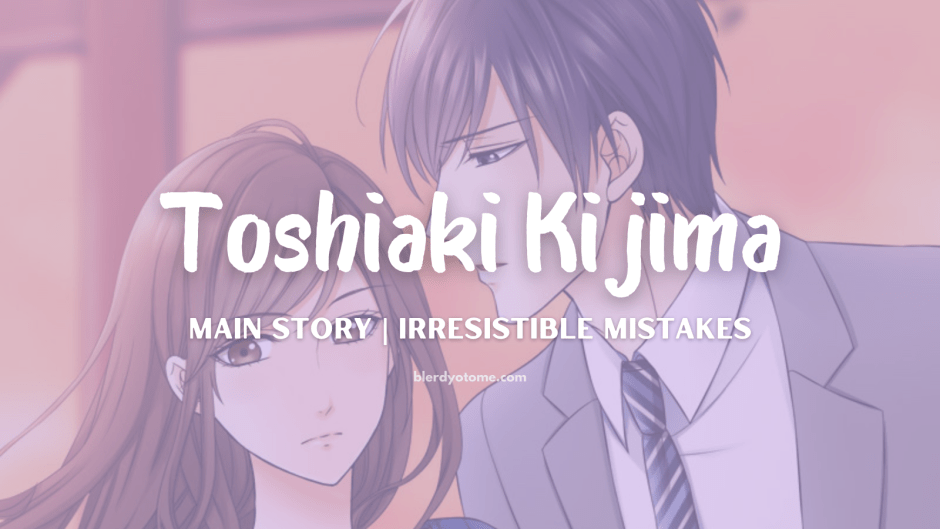 After a night of heavy drinking, the MC discovers that she slept with the Accounts Planning Executive, Toshiaki Kijima. Unable to reconcile the Demon Executive with the sweet, loving man she shared a night of passion with, the MC initially dismisses the notion that Toshiaki was the one she’d slept with. But, when he sends her a text asking to meet up at the same bar, she realizes the idea might not be as far-fetched as she originally thought! Is there really more to this cool businessman than meets the eye? Or was that night just a beautiful delusion?

This was the route I was most looking forward to and it did not disappoint. This route was very different from Tachibana’s but in a good way. I can’t see how any of the other routes in the game are going to top this one, it was just so… PERFECT! If you want a general overview of Irresistible Mistakes, click HERE, it’s covers the basic premise of the game and will include links to the other character reviews I will write for the game.

What to do when you sleep with your coworker?!

Voltage describes Toshiaki Kijima as a “cool and melancholy” executive who demands nothing less than perfection from his subordinates and peers alike. Due to his abrasive personality and cold demeanor, he’s known as the “Evil exec” and “Data Devil” around the office, but his tough love attitude does always manage to produce excellent results. His work is always impeccable, so it’s no wonder he’s on the up and up at Addison and Rhodes. But his attitude leaves much to be desired and Toshiaki is often left to shoulder everything on his own, there are several points in the story where the MC compares him to ice coffee and that’s actually a pretty fitting analogy.

Toshiaki is bitter and cold, but once you get over the first taste, there’s a subtle sweetness to him. But, looking at the way he acts at the start of the route, it’s hard to imagine him as anything other than a heartless jerk! But, even that is only half true, Toshiaki isn’t harsh for the sake of being cruel, he’s just very particular about how he wants things done, so his advice can seem a bit critical, but he means well…

Unlike in Tachibana’s route, where the MC and Tachibana came to a mutual agreement to put the whole one night stand business behind them and move forward, Toshiaki isn’t nearly as sensitive. When the MC admits that she can’t remember what happened between them he shuts down any further communications with her and remarks that if she can’t remember then they have nothing to discuss and leaves. He’s all, “my business is done here, good day, ma’am” and that’s it, which of course leaves the MC confused and rightfully pissed off. But, she figures that forgetting the one night stand is for the best and does her best to put the whole thing behind her, that is until she is assigned to work with Toshiaki on a high profile ad campaign for a coffee company.

Prior to their romp, the MC had never actually spoken with the guy, let alone worked with him, so everything she knows about Toshiaki is from second hand accounts. So she’s surprised to see just how approachable he is, mind you that doesn’t mean he’s not strict when it comes to work, but at the very least he isn’t the raging executive that everyone paints him out to be. He’s a man of few words, letting his actions speak for themselves, which is why he can come off a bit cold. But, if someone genuinely wants to learn from him he is more than willing to lend them a hand, though you shouldn’t expect him to spoon feed you anything. Toshiaki values hard work over everything else, so if someone isn’t willing to pull their own weight he will remove them from a project without any hesitation!

The morning after sleeping with your coworker…

Like most cool types, Toshiaki Kijima isn’t nearly as frigid as he seems, in fact, he’s really a nice guy once you get to know him. As I mentioned earlier, the MC really doesn’t know much about Toshiaki save for the the rumors she’s heard around the office, but it doesn’t take long for the MC to realize that Toshiaki isn’t as bad as everyone makes him out to be. It’s this disconnect between the rumors and Toshiaki’s actions that drives the MC to find out for herself exactly what type of man, Toshiaki really is.

While he may seem cold and unapproachable, Toshiaki is really quite passionate when it comes to his work. He holds himself to the same standards he hold everyone else, though one could argue that he holds himself to a higher standard. However, his strict personality at work alienates him from his fellow coworkers who openly talk about him behind his back. While he acts like the things people say about him don’t matter, he really is deeply affected by their words to the point that he will forgo office activities so as not to make the other employees uncomfortable.

Those closest to him (Shunichiro and Yukihisa) insist that Toshiaki is much sweeter than he lets on, and after playing this route I’d have to agree with them 100%. He’s much more vulnerable than even I imagined and I’ve played through quite a few routes with characters like this. There’s a hint of sadness behind his eyes that the MC first notices on the night of their one night stand, that only gets more pronounced the more time they spend together.

Forewarning, Toshiaki has a bit of a tragic past that effects his relationship with the MC. Usually, I find these types of stories frustrating since the love interest usually tries to break things off with the MC because their still hung up on the past *cough* Kaoru Kirishima *cough* but, here I found that it added another layer to an already complex character. Even when Toshiaki starts pushing the MC away, I couldn’t really blame the guy for being like that, since he was truly doing it for the MC’s sake, however that doesn’t mean I was over the moon about it either.

While Tachibana’s route was full of unrestrained sexual tension, Toshiaki’s route is much more bittersweet. Though they are few and far between (at least at first) there are times when he lets his guard down around the MC and she gets a glimpse of the man he really is. Toshiaki doesn’t do grand gestures, he’s awkward when it comes to his feelings, so he’s prone to small acts of kindness that folks would easily overlook, like when the MC is having trouble coming up with an ad pitch, he takes to a coffee shop in his hometown for inspiration.

Or the fact that he gives the MC the sweepstakes sticker from his coffee when he finds out she’s collecting them. It’s the subtle way he goes about showing the MC that he cares and not so much the acts themselves, that make them special.  But it was more than enough to make me fall head over heels for the guy.

Do I Recommend Toshiaki’s Route?

I LOVE THIS ROUTE!! It exceeded all of my expectations and even then I wasn’t expecting to fall for Toshiaki Kijima as hard as I did! When I first started Irresistible Mistakes I was afraid that all of the routes would play out the same, but this route couldn’t have been more different from Tachibana’s route and that’s a good thing. This story wasn’t nearly as sexual as Tachibana’s, but it didn’t need to be, because Toshiaki isn’t some confident virtuoso, he’s much more subtle with his feelings. Of course, he comes with his fair share of baggage, but I found the revelation about his past to be endearing and oh so heartbreaking… I just wanted to hug him and tell him how wonderful he was!!

This story was much more heartfelt and emotional for me, than Tachibana’s because the relationship between the MC and Toshiaki started from scratch. Unlike in Tachibana’s route the MC didn’t even like Toshiaki in the beginning, her feelings developed gradually as she spent more time with him at work. She began to see a different side to the cool executive and that made for a much more organic experience.

Overall, I really enjoyed this route! Toshiaki Kijima is like a cup of coffee, the first sip is bitter and a bit off putting, but the more you drink it the more you notice the subtle complexities of it. There is a depth to Toshiaki that most of Voltage Inc.’s cool types don’t possess, which I found refreshing. Some folks will be put off by his cold demeanor early on, but trust me, he is worth it in the end!

15 thoughts on “Irresistible Mistakes | Toshiaki Kijima Main Story Review: I Slept With an Executive from Work?!”