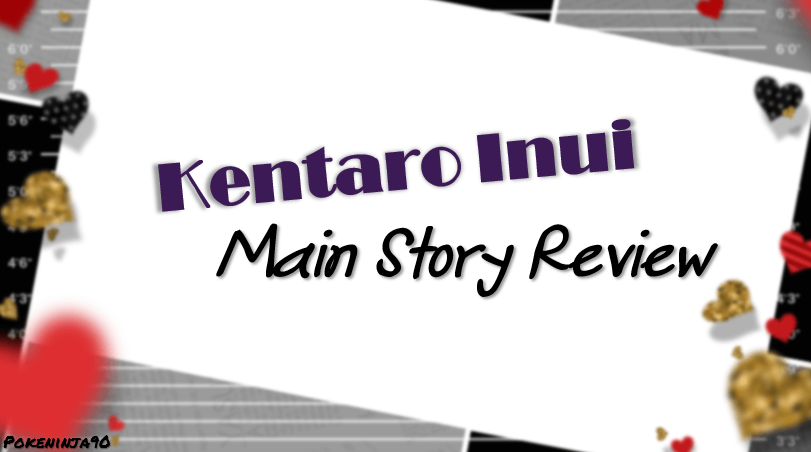 So while I was away at Katsucon, Voltage Inc released the final route in their newest (at least for the English market) app, Dangerous Seduction. I’m not gonna lie, but I am not a huge fan of the mature romance options like Kentaro Inui, so I went into this route not really expecting much… 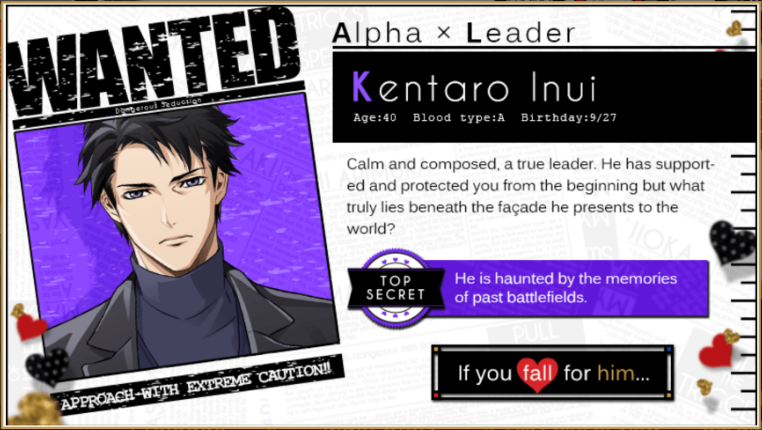 Boy was I wrong! This fills in the gaps left by the other routes and we finally, FINALLY get to see the face behind the organization after the MC! We also get to learn a bit more about the MC’s father and his connection to the team… especially, their enigmatic leader, Kentaro Inui. If you want a general overview of Dangerous Seduction, click HERE, it’s covers the basic premise of the game and includes links to the other character reviews I wrote for the game. 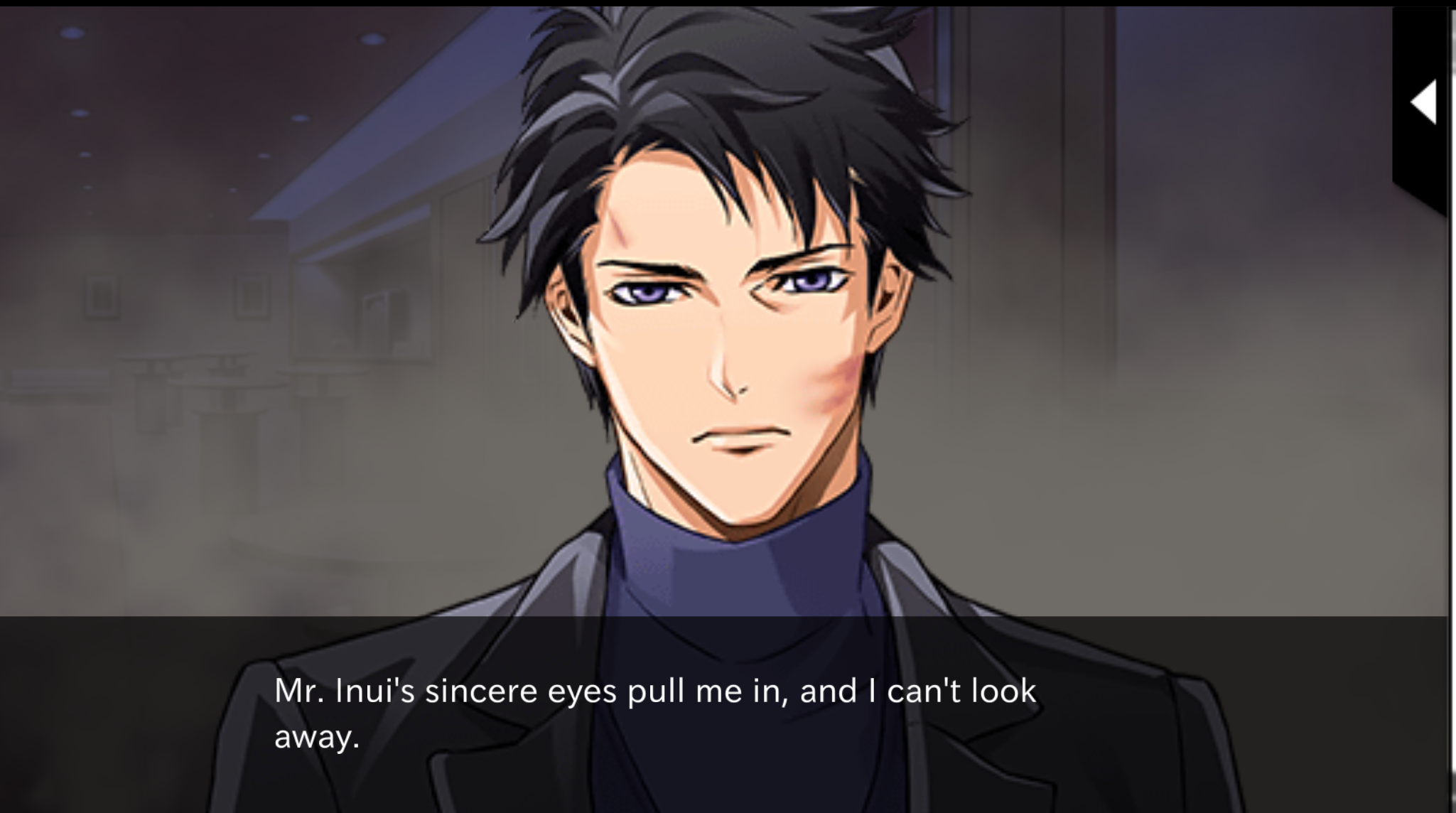 Not much is known about the team’s leader, Kentaro Inui. Sure there have been a few hints here and there in the other routes about his true nature, namely Masaharu’s route, but, ultimately the guy is a brick wall. In the other routes he’s always in the background, supporting the team on their various missions or providing the MC with key insight into her chosen love interest…so I really had no idea what to expect from Inui. He’s the glue that holds the Bishie Bodyguard Brigade together, and the team’s unofficial dad… In fact the MC chooses him as her personal protector, because despite his gruff visage, he seems to be the most reliable member of the Ikemen Initiative, and he proves that time and time again. 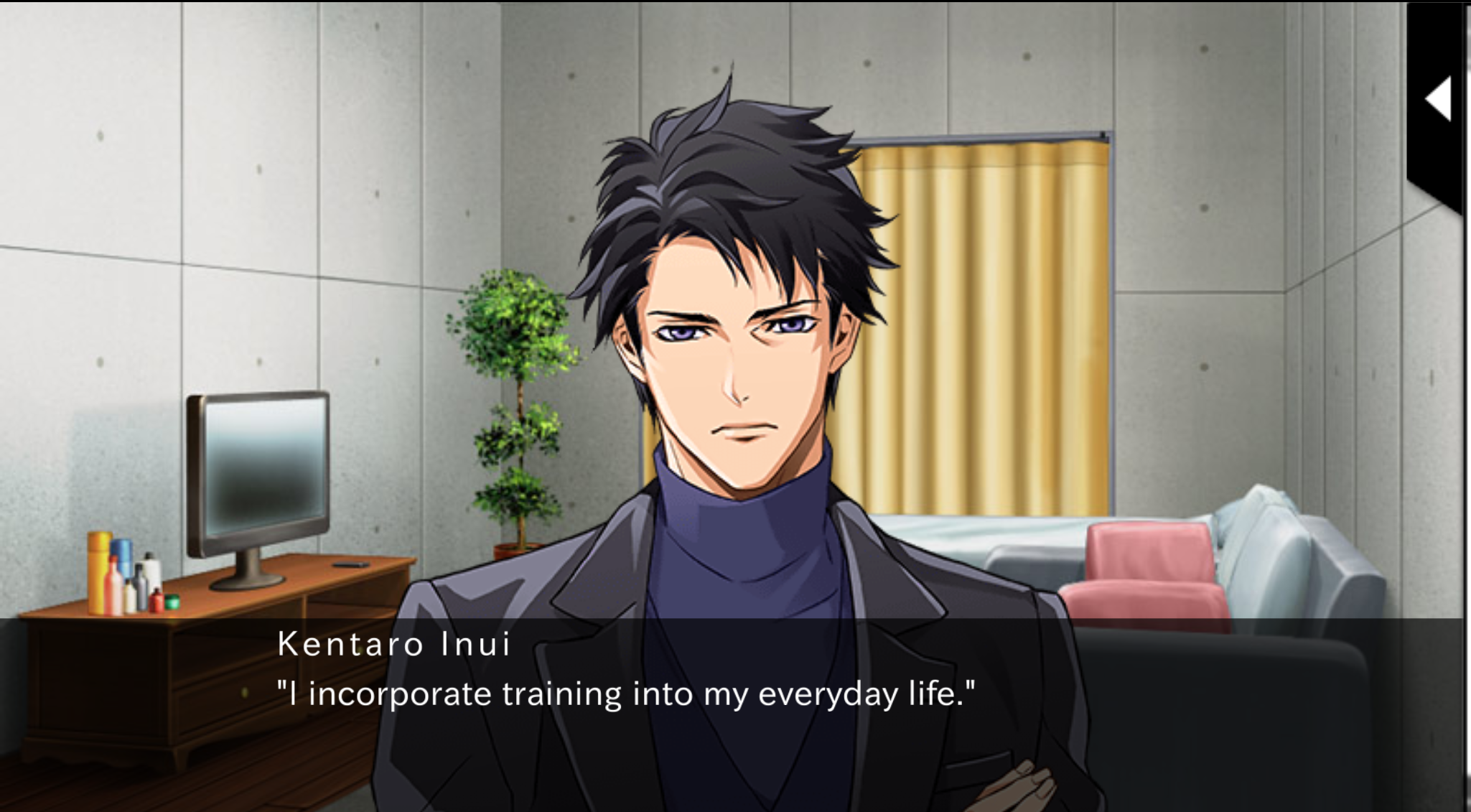 Inui isn’t as energetic as the other guys on the team, he’s a man’s man! The guy drinks whiskey like its water and he is always looking for ways to train his body and his mind. Dude has weights attached to his chopsticks so that he can even train while he eats… talk about badass! He makes the other love interests look like a bunch of rowdy teenagers. Inui doesn’t flaunt his prowess, nor does he command respect, the others follow him because he does what a man does, he protects his team. He doesn’t jump into things half cocked, Inui carefully considers all of the facts before he does anything, he knows when to fight and when to retreat! 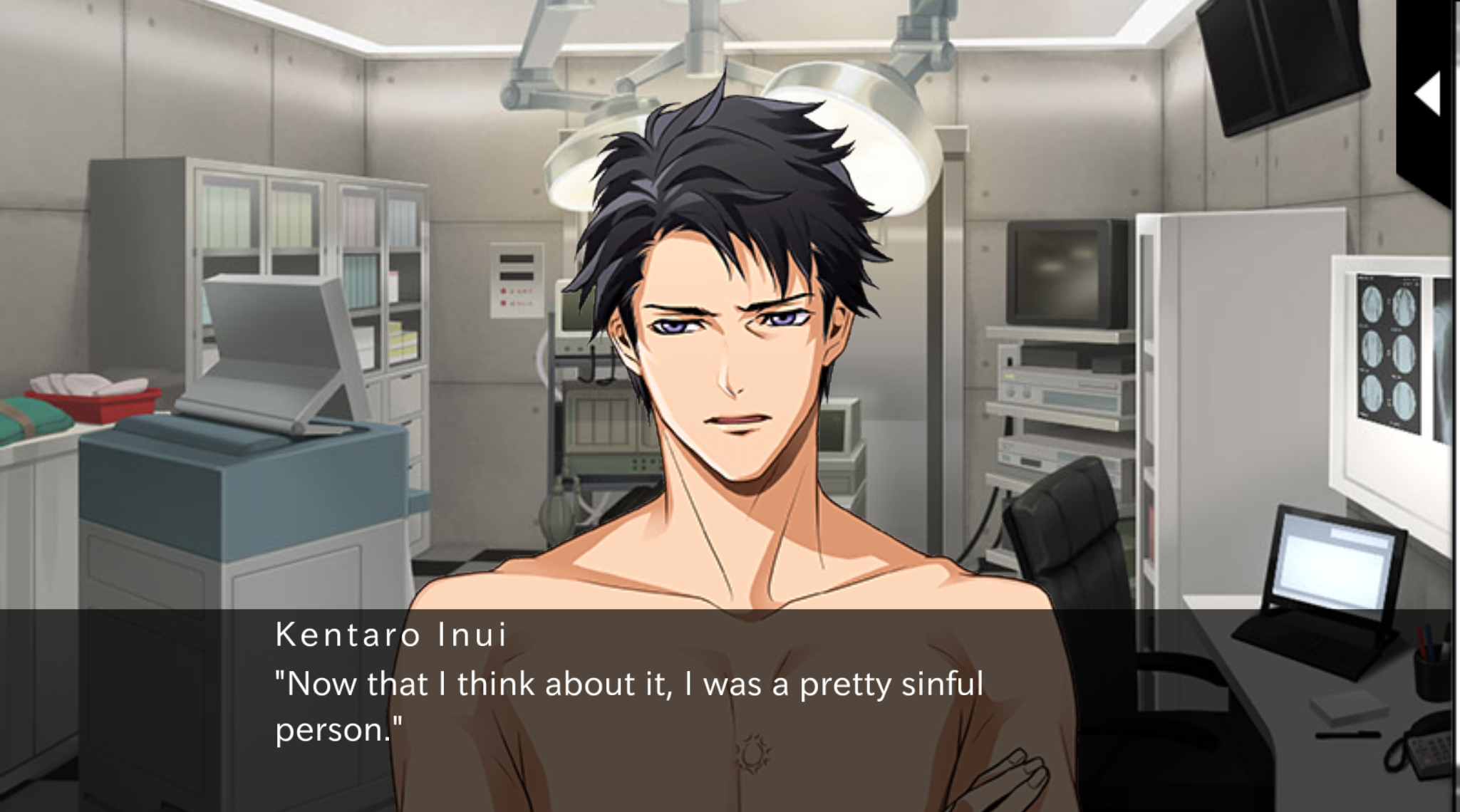 But, after years as a mercenary, Inui has developed disregard for his own life. He isn’t reckless, far from it, but he is willing to throw his life away if it means protecting the MC or one of his comrades. There are a few instances in the story, when Inui goes above and beyond the call of duty and severely injures himself. But, instead of pulling back and allowing his body to heal properly, dude is in the infirmary doing sit ups like it’s nothing! The other guys on the team are in awe of his tenacity… he’s a frickin’ tank, even his childhood friend Masaharu gets surprised by how strong he is!

Since Inui was acquainted with the MC’s father, this route explained a bit more about the enemy organization and we were given a lot more information about the MC’s father and his work prior to his death. 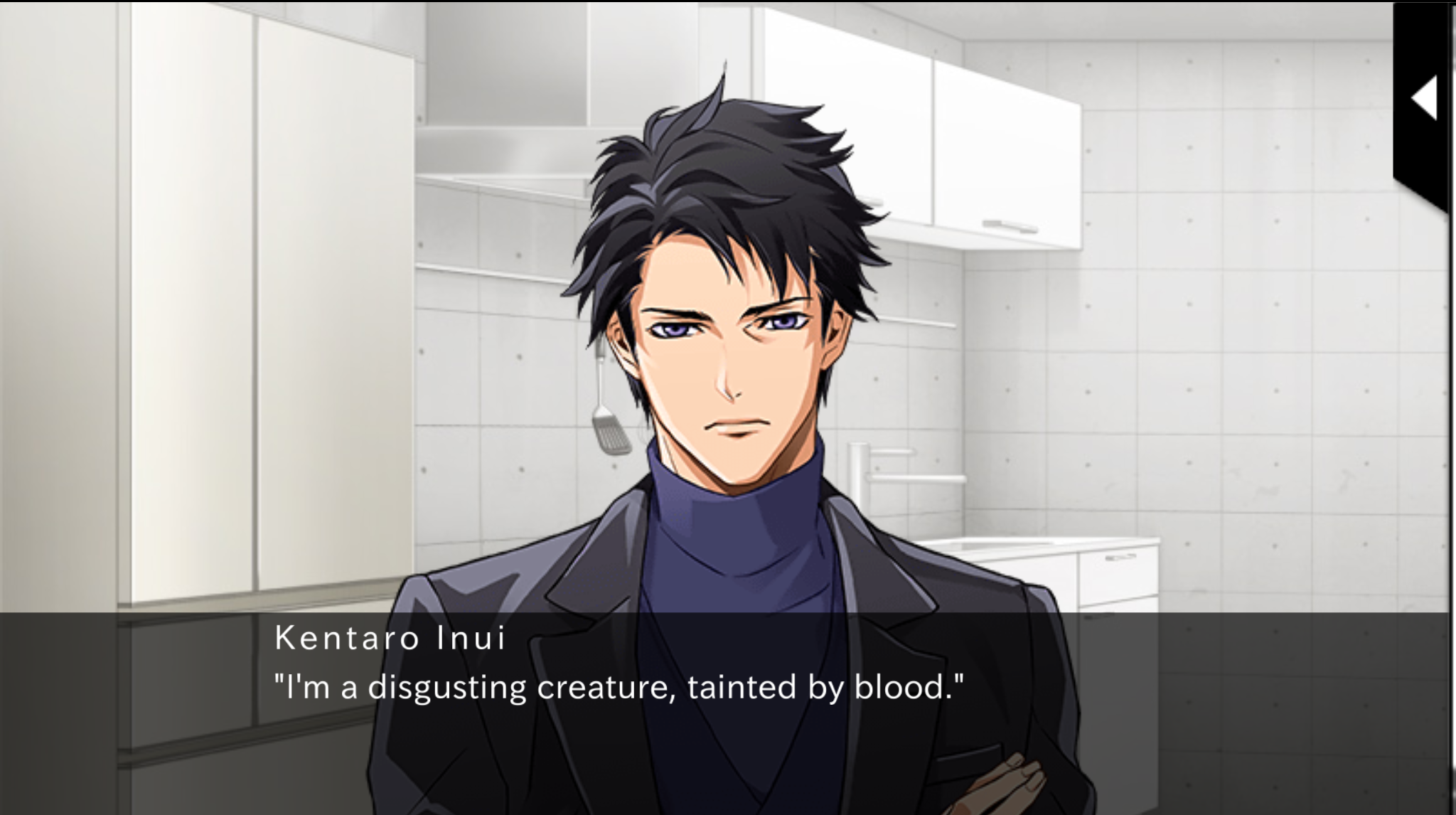 For that reason, Inui’s route wasn’t really as romance heavy as some of the previous guy’s routes. Also Inui doesn’t treat the MC like a nuisance, he actually takes the time to listen to what she says, and when she has a genuine concern or complaint, HE ADDRESSES IT!! Let me say that again for those of you in the back: Inui listens to the MC and addresses her concerns! Sure he doesn’t tell her everything about their mission or her father up front, he keeps some key things to himself (for her protection), but he doesn’t ignore her when she asks him questions like, oh, MASAHRU and ARIMURA… and hell, Hino too! 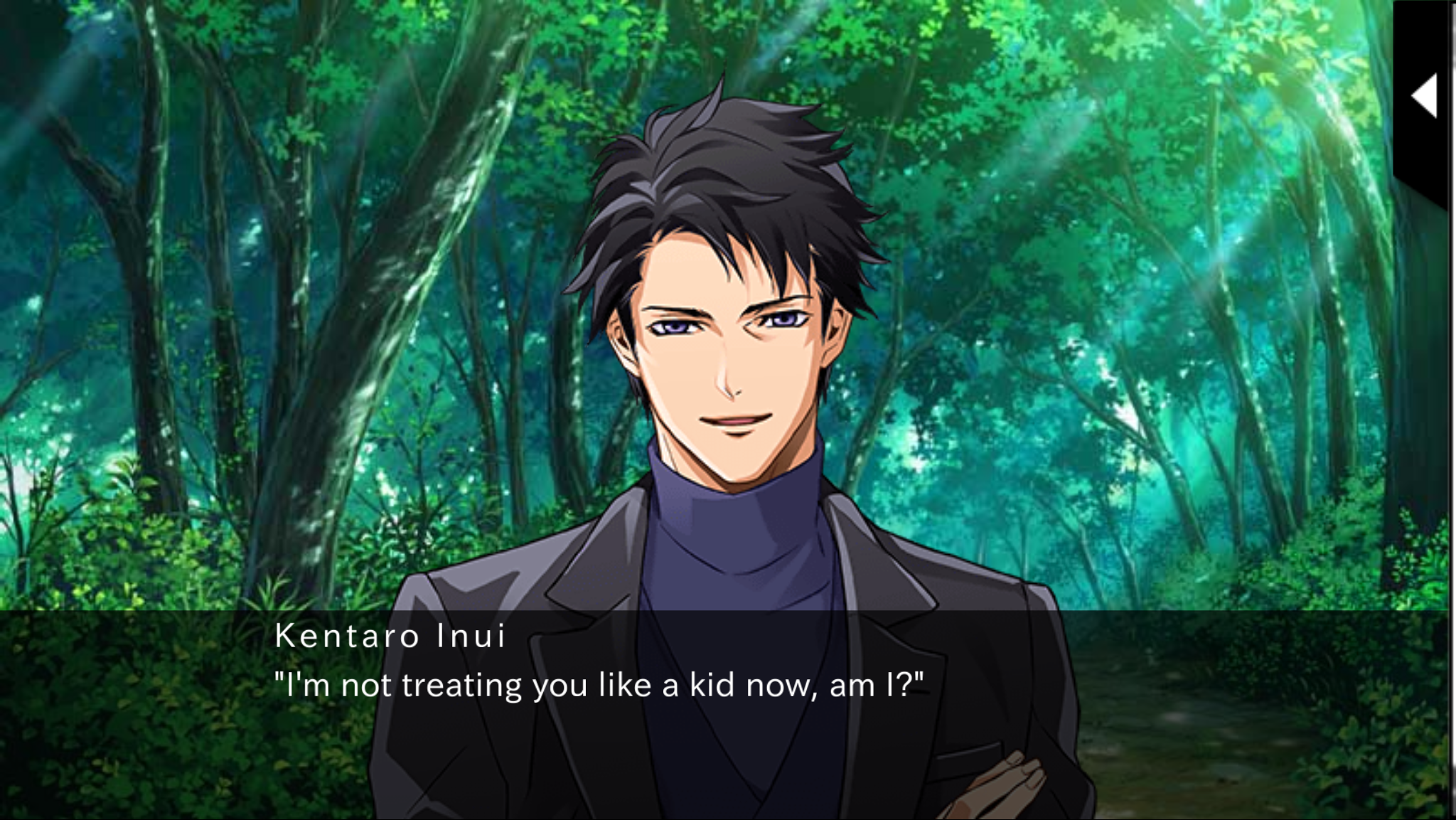 However, I didn’t like that Inui spends the better part of the route treating her like a child… I get it, he’s 40 years old and the MC is, what, 20-something, but for once I wish that Voltage would give us just one mature love interest that doesn’t treat the MC like she’s a 12 year old…. Inui has his reasons for treating the MC like that, but, that doesn’t mean I had to like it! *sigh* But, I do want to commend Voltage for the writing in this route, it was much more story driven than the others and the romance aspect wasn’t as integral to the overall plot progression so kudos! *lifts glass* Also, bonus points for the MC, this girl has been my hero in every single route in the game! Not only does she hold her own in a den of wolves, but she doesn’t just sit back and let her man protect her, she actually takes part in the various missions throughout… But, her crowning moment, was when she shut Masaharu down, I had to give her a slow clap for all the shade she was throwing in this route… it was beautiful! *wipes tear*

I’d be lying if I said I was immediately taken with Inui, in fact it took me a few chapters to really warm to the guy, but when I did… I couldn’t look away! Inui is a stoic and selfless man, who will stop at nothing when it comes to protecting the MC. Sure he appears to have everything together, but behind his composed mask is a man literally hanging on by a thread. Guilt is the driving force for most, if not all of Inui’s actions throughout the route. And it’s only through his interactions with the MC that he learns to let go of his past and move forward.

Since he knew the MC’s father prior to his death, Inui’s route is much more plot heavy than the others and it works. If this route had been overly romantic, I don’t think I would have liked it as much as I did. There was only one teeny tiny thing that I didn’t like about this route and that was the first love premise… The minute the MC started describing her first love in chapter one, I knew that Inui was the guy from her flashbacks… so forgive me for not fangirling over the “big” reveal…

Subtlety isn’t exactly Voltage’s strong suit, and apparently neither are decent CGs… Inui had some of the worst CGs in the game! There are only two that did a fair job of showcasing the guy and the others had the poor guy looking derpy as hell! *sigh* Other than that, I have no real complaints,  I really enjoyed playing this route! It built on the plot elements from the other routes concerning the MC and her father, and offered some closure on most of them. There are a few loose ends left, but I’m sure Voltage will address them in Inui’s subsequent stories. Overall A+!

What do you think about Inui? Which guy did you like the most? Have you played any other Voltage games? Do you have a suggested route? Want me to review a specific game or character? Let me know what you think in the comments section. If you like what you see, like this post or follow Nice Job Breaking It, Hero! As always THANK YOU FOR READING!!