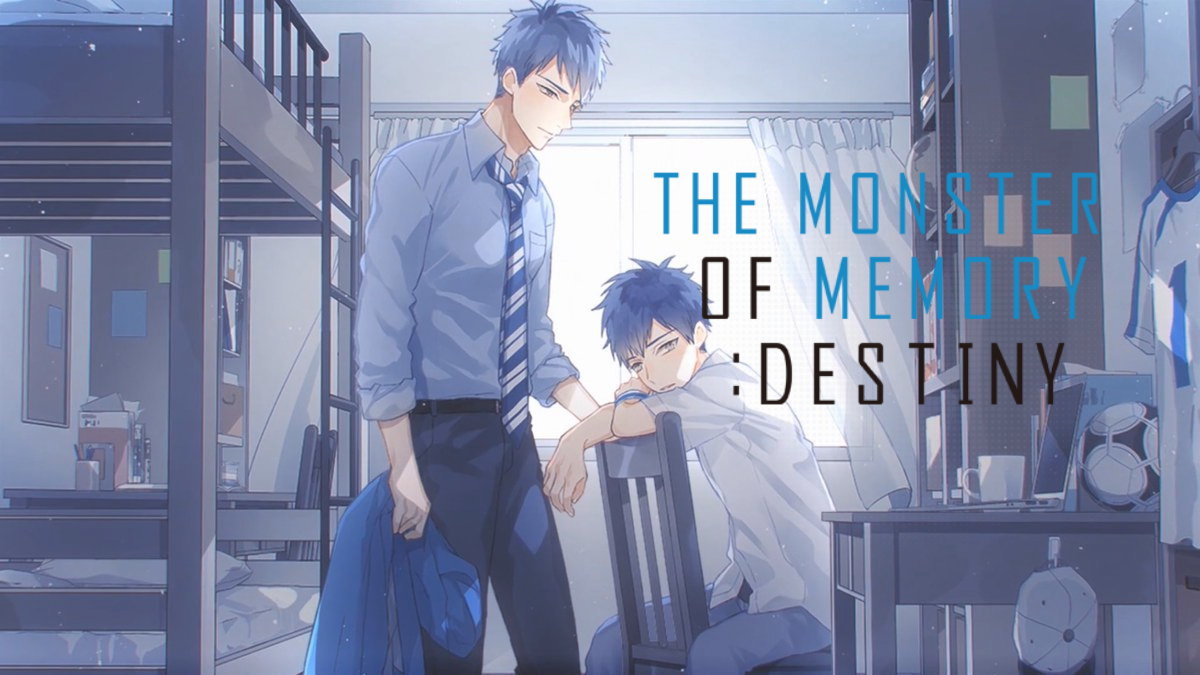 The Monster of Memory is a Taiwanese visual novel developed by Tong Li Publishing Co. and adaptation from an as of yet unlicensed manga series of the same name. After a tragic accident claims the life of his older brother, Sumi applies for an experimental project that promises to bring him back through the use of AI technology. While initially hesitant, Sumi eventually agrees to take the AI named RE614 into his home, but while it looks and acts like his deceased older brother at it’s core it is still just a machine. What kind of impact will RE614 have on Sumi and his family? Will it help Sumi finally learn to live with his grief?

Trigger warning—While it is not sexually explicit, The Monster of Memory Destiny does deal with the romantic relationship between brothers.

Sumi has always idolized his older brother, Haru, even taking up soccer in hopes of one day being able to play on the same field as him. But, after Haru dies suddenly saving his life, Sumi is left with deep feelings of guilt and regret. Unable to move on and desperate to see his beloved big brother again, Sumi applies for a 1 year experimental research project that promises to give families the opportunity to see their deceased members again with the help of an AI called Happiness, that takes on the appearance and memories of the family member they’ve lost. In order to sustain itself the Happiness unit must be fed memories of the deceased which can be obtained through items a person used/owned in life. The more the AI consumes the more like the person they become, but once an item has been “eaten” by Happiness it can no longer be recovered.

Sumi is given the unit RE614 and while it looks exactly like Haru, it can never replace the brother that was lost. But, the more time Sumi spends with RE614 the more complicated his feelings towards his deceased brother become. The brother he loved is gone, but with RE614, this is his second chance…

What if you could see your lost loved one again?

Right, so not gonna sugar coat this, The Monster of Memory is a story about the “ultimate love” between two brothers, so if you are not okay with that—give this game a pass—because there is nothing implied about Sumi’s feelings for his onii-san. It’s that kind of game. Though, Monster of Memory kind of skirts around the questionable relationship between Haru and Sumi, because in every route except for one, Haru dies and Sumi interacts primarily with the AI unit RE614, that just happens to look and act like his dead brother, but isn’t actually his brother… it’s a very thin line. And the one route that goes all in with the incest is blessedly short in comparison to the rest of the game and can be avoided by NOT picking “go to the hospital” at the start of the game. Also as far as boys love games go, Monster of Memory is pretty tame, the most you’ll get is some kissing and a bit of nudity, but all of the naughty bits are conveniently hidden. And, technically Haru and Sumi never have sex, just a lot of sensual touching so that’s a line that doesn’t get crossed. I’d give this game a PG13 on the BL content scale—we get to see some naked torsos (with nips) and that’s about the extent of that, so it’s relatively safe when compared to something like Camp Buddy or Full Service.

The Monster of Memory  delves into the moral and ethical implications of using technology to bring a dead loved one back to life, in an extremely emotional and intimate way–Sumi blames himself for the death of his brother, Haru and is unable to move on in the months after his passing. While contemplating his relationship with his brother, Sumi realizes that he never really knew all that much about his brother in the first place and that sends him spiraling, because everything in his life was so wrapped up in his brother and now that he’s gone Sumi is left without any real direction. So, when he gets the opportunity to bring “his brother” back to life via Happiness—a program that allows families to bring back their deceased loved ones through an AI that takes on their appearance and memories—he jumps at the chance. The program is only supposed to help families of the deceased come to terms with their loss and move on, but for someone like Sumi the AI, RE614, stirs up complicated emotions.

But everything comes at a cost and in order to maintain the AI unit, Sumi must “feed” it items that once belonged to his brother so it can convert them into memories. Once these items have been “fed” to the AI they can no longer be retrieved— so in order to sustain the illusion, Sumi must part with the sentimental mementos of his brothers life. It’s a painful choice to make, but with each new item the AI consumes the more like Haru it becomes.

While it looks and at times acts like his brother, RE614 isn’t Haru and it’s a heartbreaking realization, because it begs the question what is it that makes a person a person? Is it their appearance? Their mannerisms? Their memories? What determines our identity? For all intents and purposes, RE614 is Haru, but he also isn’t and that is something that Sumi constantly struggles with throughout the story. And it becomes much harder to separate who Haru was from who RE614 is, especially as the AI starts to take on more and more of Haru’s memories. At first he is little more than a living doll wholly dependent on Sumi for information on how to interact with the family—there’s a funny scene early on where Sumi has to teach RE614 how to use the bathroom.  With each new memory he consumes, RE614 begins to have much more autonomy in its actions and even gives insight into Haru’s thoughts and feelings that went unsaid during his life. Through his interactions with RE614, Sumi comes to understand more about who his brother really was outside of the idealized version of him Sumi knew in life.

Grief and loss are human experiences and through his interactions with RE614 you get a good sense of just how much of an impact Haru’s death had on Sumi. While the story primarily focuses on Sumi, I did like that it also shows how his mother deals with the new addition to their family. Granted her grief isn’t explored to the same degree that Sumi’s is in the story, we do get a few glimpses into the weight the loss of her eldest son has on her in the ways that she interacts with the RE614 unit. She openly embraces it as a member of her family even going out of her way to collect items from around the house to sustain it, because for her the AI is the last connection she has to her son. Because the story is told from Sumi’s perspective it’s easy to forget that Haru’s death had an impact on anyone else, so I really appreciated the brief moments with the mom. There’s even a scene where a friend of Sumi’s reveals that they also had a Happiness unit in their home and they share their experience living with their AI, particularly the complicated emotions of living with a deceased family member and making new memories while also having to come to terms with your feelings of the person from when they were alive.

While most of the story is set in the present day there are a few establishing flashbacks that take us through moments from the brothers’ past—the accident that took Haru’s life is revisited quite a few times and each time is more painful than the last thanks to Sumi’s horrifyingly detailed narration and some choice sound effects (there is a mention of body parts flying around that was a bit too much for me). At times it’s painful to read and I will fully admit to bawling my eyes out at some of the more emotional scenes. Ending 1 in particular wrecked me emotionally and I sat in  silence just bawling my eyes out while the credits rolled…

Now for all the praise I give the story, there is one thing that really drove me absolutely mad and that’s the translation. While for the most part the localization is passable, and there was never a point where I couldn’t understand what was going on in scene, the English translation is rough. Like the grammar was all over the place at times and the overly wordy. There were other instances where I just mentally corrected lines in my head—the text would read “I think this is the first time I talk to you about him?” when it should have been “…talked to you about him?” It was never enough to fully pull me out of the game, but annoying just the same. There was also this interesting choice to make some of the lines bolded or in a larger font size to convey intense emotion—which was a nice visual touch.

The art is gorgeous, the sprites are well done and I like that they had a bit of animation to them, like characters would shake their head “no” or nod. Also when a character is upset the frame would shake a bit to indicate anger. But, the CGs… now, I’m not okay with the “brotherly love” but damn if the CGs aren’t gorgeous to look at! Most of the CGs are recreations of scenes from the manga the game is based on and after digging up some RAWs I have to say that they are pretty good renditions. The Monster of Memory Destiny is also fully voiced in Chinese (with English, Japanese, & Simplified Chinese text options) and I have to say that the voice acting really made this game for me–you can really hear the anguish the VA’s performances during the emotional scenes and when coupled with the fantastic instrumental tracks of the BGM… it makes for a much more immersive experience.

Final Verdict – Is The Monster of Memory Worth Playing?

ABSOLUTELY! Once you look past the bro-con romance, The Monster of Memory is actually a very thoughtful and emotional game that explores the implications of getting to spend just a bit more time with a loved one who has passed away. We all have someone that we desperately want to see again, whether that’s a lover, a friend, a parent—everyone has experienced some form of loss and it’s completely natural to want to bring them back, even if it’s just for a short while. But, at what cost?

This is a game that really tugs at the heartstrings, when I say I cried, I mean it—The Monster of Memory: Destiny hits hard and despite it’s bittersweet conclusion, I really enjoyed the overall experience.

2 thoughts on “The Monster of Memory: Destiny BL Game Review”