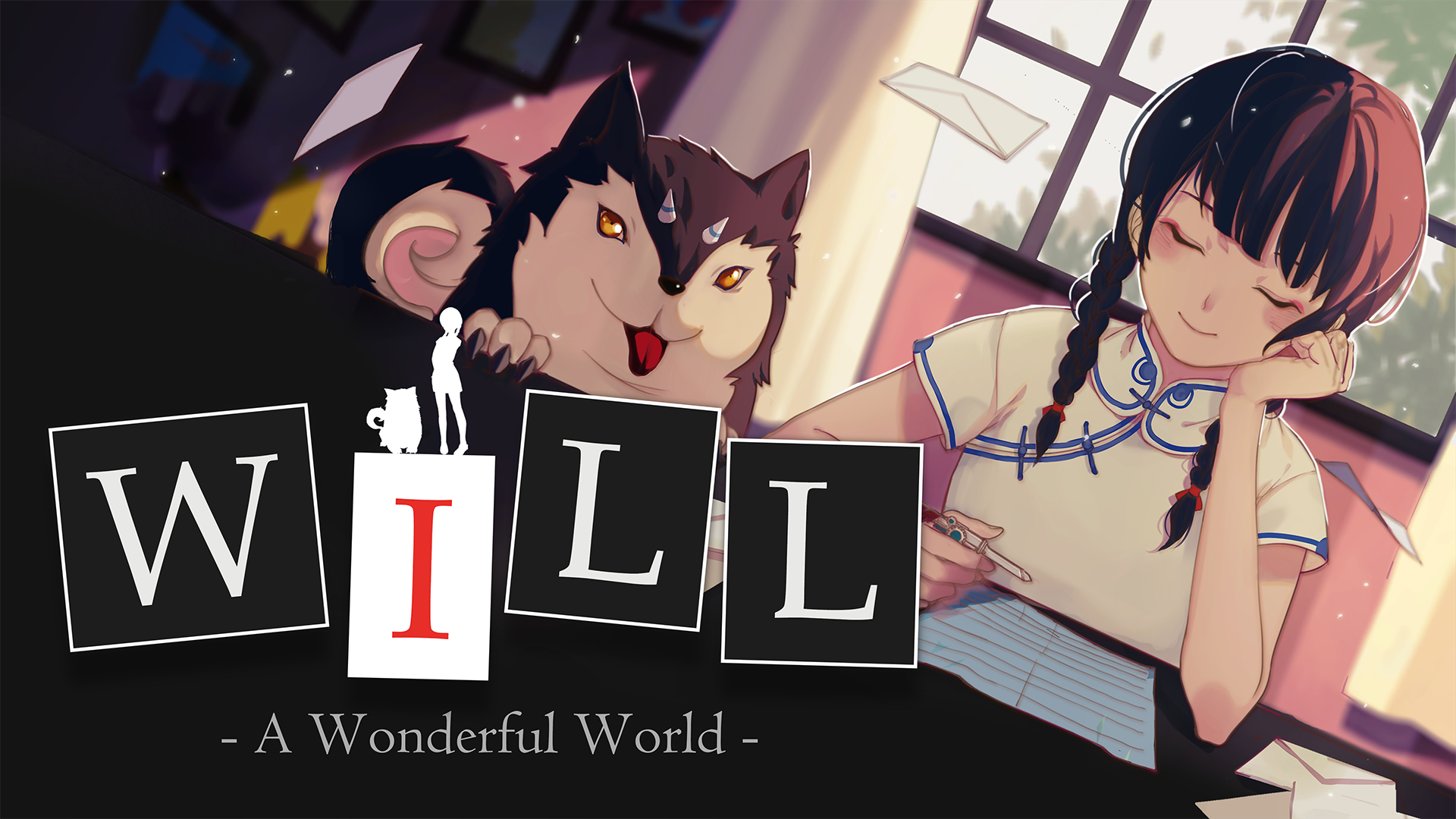 I picked up a copy of this game during the last big Steam sale and like most games I buy, I promptly forgot all about it. But, fittingly it was an odd twist of fate that prompted me to “rescue” WILL: A Wonderful World from the dusty recesses of my backlog and I am so glad that I did! From the moment I started the game all the way to the very end, this game is one HELL of a wild ride. High school students in love, kung fu fighting police detectives, assassins, and even a scrappy alley cat make up the game’s eclectic cast of characters and you play as an amnesiac god who controls all of their fates with the flick of a pen.

While WILL: A Wonderful World features a story rich narrative, it’s unique gameplay makes it feel more like a point and click puzzle game than an outright visual novel. In the game you take on the role of an amnesiac god who is tasked with altering the fates of troubled humans armed only with a strange fate-altering pen (a la, Time Hollow). Helping you on your journey is a snarky talking dog named, Willy. Occasionally you will receive letters from humans in desperate need of your help—their problems ranging from something as simple as a young girl who loses her house keys to a newbie detective caught in the middle of a bloody gang war. By rearranging the order and combinations of sentences in these letters, you can alter the destiny of the letter’s sender, sometimes things go right and sometimes they go horribly wrong.

This game is NOT for the faint of heart, WILL deals with some pretty heavy themes that may be triggering to some players. There is a particularly devastating child abuse scenario that even found especially hard to stomach, but thankfully that plotline was blessedly short! The other plotlines shift between moments of levity and soap opera levels of melodrama—which can give you a bit of mood whiplash as you try to keep up with the tonal dissonance between plot points. But, once you find a good rhythm, your sense of morbid curiosity takes over and you find yourself engrossed in the lives of these characters. Despite receiving some letters at the same time, each of the storylines are separated by time and location; so some events that appear to be happening within the same timeframe may in reality take place several years apart.

Sometimes two letters will sync up allowing you to exchange details between the two. Which can make for some unintentionally hilarious situations—my favorite being swapping a loaded gun with a dried fish, which resulted in an alley cat using a gun to defend his territory and a cop using a dried fish to disarm another detective. Stories are constantly in flux and your decisions can have a lasting effect not just in the life of one character, but ALL of the characters in the game.

Early on altering the contents of the letters is pretty straightforward—move sentences around to alter key events in the story—but as the game progresses the rules become much more complex and I will fully admit that there were some scenarios where I gave up on using logic and just started moving sentences around until something stuck! And, there are some instances where you have to revisit older letters to find small details that are sudden super important in a completely different letter. Or there are even times when you have to change an ending in an early letter to unlock a new letter. This is a game where you kind have to get every ending (yes, even the bad ones) because sometimes that’s what it takes to get the full scope of the story—and not gonna lie there was something morbidly satisfying about messing around in the character’s lives. One slip up could mean the difference between life and death for these characters and in some cases, death is the best option…

I will admit that the game can go a bit too hard with it’s gut wrenching plotlines and there were times when it felt like my interference was making things worse for the characters. One of the characters is a high school girl in love with her much older teacher and the game seems HELL bent on making her life as miserable as possible… and don’t get me started on the young boy from the abusive home—I needed a few days and a few glasses of wine to recover from THAT tragic series of events.

But, even then I still found myself coming back for more. There were times when I played into the wee hours of the morning just so I could see what was coming next! Will the nerdy gamer get his dream girl? Will the trafficked young woman escape her viscous captors and find her younger brother? Will the two detectives finally stop teasing us and hook up?! It’s literally anyone’s guess, but I sure as hell made it my mission to find out! Part of the appeal of the game is how vastly different each of the characters and their situations are from one another and after ferreting around in the intimate details of their lives it’s easy to get invested in their problems.

When you aren’t poking around in the tragic lives of the “main cast”, the story shifts back to the god, who is a young girl with amnesia and her companion, a horned talking dog. Their storyline becomes much more important as you progress through the game, but there are a few hints early on that all is not what it seems with the pair. While the game goes out of its way to try and flesh out the personalities of the girl and the dog, their storyline kind of pales in comparison to the other stories, which are arguably much more interesting. And even the game seems to forget about the girl and her dog Willy most of the time, as the bulk of the gameplay and narrative focus is on the characters whose fates you alter.

All in all, WILL: A Wonderful World is absolutely worth giving a go if you have the chance! The plot can sometimes go a bit too far into nightmare fuel territory (those trigger warnings I mentioned are 100% valid), but even when it’s at it’s darkest, WILL still delivers an satisfying story that for better or worse, stays with you long after you finish playing. The gameplay mechanic is a cool idea (in theory) that can be a bit convoluted at times, but when you manage to figure the right sentence combo to clear a letter it’s one of the most satisfying feelings in the world! The characters (with the exception of one or two) are all interesting and I like that you gradually learn more about them as the story progresses. A character that starts the game one way can become a completely different character by the end (that Jimmy glow up was *chefs kiss*) and it’s fun to see how your actions impact their individual character arcs. The conclusion can be a bit hit or miss, but, as it is with most things in life, sometimes it’s more about the journey than the destination.

Hey Blerdy Tribe, the folks at Circle Entertainment were kind enough to give me a Nintendo Switch Code for WILL: A Wonderful World and I wanted to pass on the goodness to you dear readers! One lucky reader will have the chance to win a free digital copy of the game for the Nintendo Switch! The giveaway is open to everyone who wants to enter, but there are a few rules~

The giveaway will run until February 12, 2021 at 11:59PM EST. Because of the game’s content, you must be 18 years or older to enter and I will be verifying your age.

Enter the Giveaway: WILL: A Wonderful World Nintendo Switch Giveaway

41 thoughts on “WILL: A Wonderful World Game Review + Giveaway”