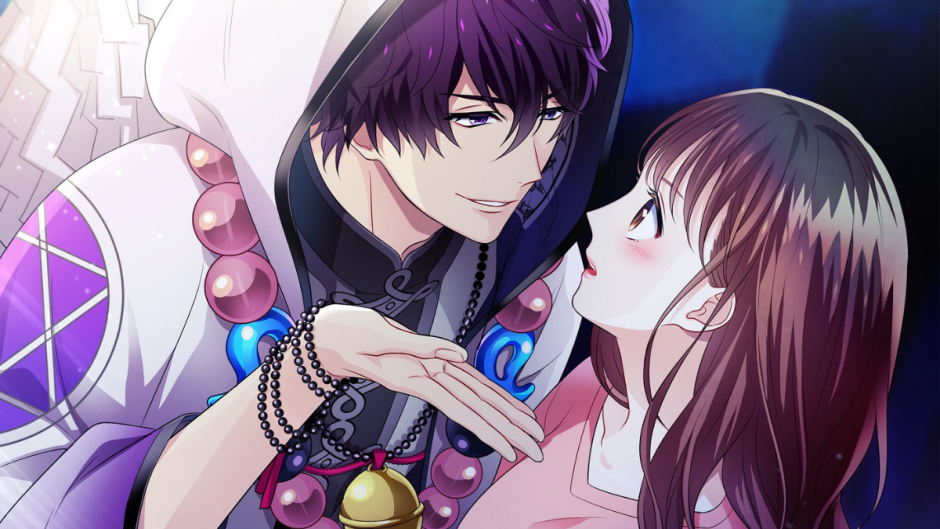 In a seedy corner of Shinjuku dwells a group of phony psychic mediums. Using their winning smiles, they attract suckers and make bank. One day, fate leads you to join this disreputable band.

“Wondering if I’m not so bad after all?”

Your new job is at Mado Psychics, and your boss is a total jerk. Unless… he’s not all that bad?

“You can stop second guessing yourself. I am all bad.”

When the director of an all girls’ school calls looking for help investigating the mysterious death of one of her students, you and Suzumu are put on the case. So the two of you go undercover as students at the school to find out the truth. Your investigation leads you and Suzumu to discover a new game making the rounds through the school may be responsible for the girl’s death.

Suzumu Mado is a much different experience than what I was expecting, existing firmly in the moral grey area. He’s a money-hungry fake Medium working out of Mado Psychics in Shinjuku and while he doesn’t have the true gift, he does manage to hook in a few unsuspecting clients Suzumu isn’t above overcharging folks for his services–charging a small fortune for “purification salt” he picked up at a corner store for 100 yen. If there is an opportunity for a quick buck, Suzu will take it even if it means being a little underhanded and for him, anything can be bought for the right price; which is often at odds with the MC’s strong sense of justice.

But, beneath his arrogance and shadiness, has some cute points, like he gets easily winded doing even the lightest exercise (something I can relate to) and he loves sweets. Suzumu is surprisingly considerate of others, selling lies to his clients to give them peace of mind as they cope with hardships in their lives.

Fun, chill vibes all around

Suzu can come off a bit uncaring, but when it comes to the main crew, he’s much more relaxed and playful–they play Gather Forest (diet Animal Crossing), occasionally go out for drinks at the Burly Bar, and go shopping for groceries together–they feel more like one big happy family, than co-workers. The bromance moments between the main LIs were among some of my favorite in the route, whether that was Haru constantly fussing over Suzu’s well being or the chill, quiet friendship Suzu has with Taro. And when the MC joins the group they bring her into the fold, even inviting her to join in on their hangout sessions.

The fun witty banter and the occasional fourth wall breaking (and surprisingly on the nose otome commentary) makes Tokyo Love Hustle one of the most hilarious Voltage games I’ve played in a long time.

If you’re expecting grand declarations of love and super fluffy luv luv vibes, this is not the game for you–the MC can’t stand Suzumu at first. The relationship between the MC and Suzumu starts off pretty rocky, with the pair constantly butting heads. Suzumu thinks nothing of swindling people to get what he wants, while the MC is disgusted with the underhanded tactics he uses to get what he wants. This is very much a slow burn romance and the route focuses more on building up the friendship between Suzu and the MC, showing how they gradually come to understand each other and respect their differing points of view and find common ground. And trust the MC gives just as good as she gets. I love this MC, she is hilarious and snarky and isn’t above putting Suzumu and the boys in their place.

While not overly romantic, there were some super cute moments between the MC and Suzumu that I loved–like the MC comforting Suzumu after he gets scared by a thunderstorm or the two of them using a shot drinking contest to learn more about each other. The goal of an otome game is first and foremost the romance, but by focusing on the genuine non-romantic moments between the MC and Suzu, the writers make their budding relationship that much stronger. It’s so good that I wasn’t even mad that though they don’t actually “get together” by the end of the route (I’m assuming that’ll come in part 2).

Short answer, yes! The story is fun and I like the more relaxed tone of the game and Suzumu’s route. The romance is very much a slow burn, but that works since the focus of part 1 seems to be setting up plot points for later storylines and character routes. *cough* I need Aiji’s route NOW *cough*

That said, I’m still not sold on the Love Choice premise–$20 per route is pretty steep to unlock the best end, but if you have the extra hearts saved up I definitely recommend giving this game a try. Suzumu’s route is hilarious and I’m curious to see where the rest of his stories take us in the future!