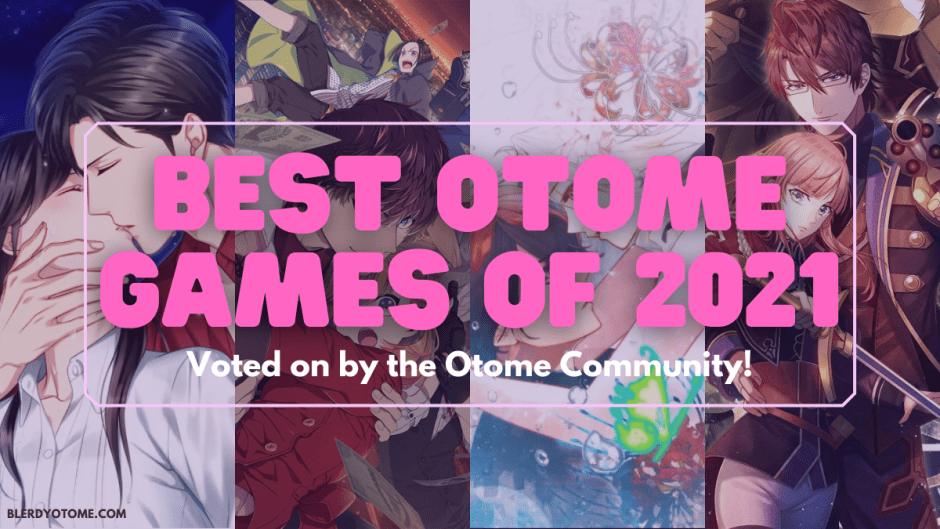 2021 has been a fantastic year for Western otome fans with a ton of new titles making their English language debut. Not only that, but publishers like PQube and Moonchime have stepped into the otome localization ring with great new releases–crime noir, BUSTAFELLOWS and the indie comedy, Suki Da. On top of that long dormant, Idea Factory International surprised the otome community with their big return, bringing fans Cupid Parasite! And with the end of the year right around the corner, I wanted to reach out to the otome community and see what games they thought were the best otome game localizations of 2021.

So, for this list, I wanted to look specifically at otome games that were localized in English in 2021–I’ll do a separate list for indie games at a later date. I’m also restricting this list to official localizations, so no fan translations or patches. And finally, I also included my picks for the best otome game of 2021 at the end of the post!

With her entire clan wiped out years ago, Olympia has been isolated for most of her life. Now she lives as the only person on Tenguu Island who can perform the ritual that restores light to a world shrouded in darkness. The heads of each Primary district—Red, Blue, and Yellow—lead a society governed by the island’s rigid class structure. As Olympia travels between the districts, she discovers their wonders and their weaknesses, as well as an entire underground community of shunned individuals whom she becomes determined to help. If she can find the person destined to be her soulmate, she will finally be able to open her heart and reveal her true name, continue her bloodline, and save the world before it is destroyed.

In the heart of Los York, a glitzy, trendsetting metropolis that sits on the cutting edge of culture and couture, one daring marriage agency stands apart from the rest in success rate and in style. The Cupid Corporation.

As Cupid Corp’s top bridal advisor, our heroine consults the city’s most in-vogue singles to make their wildest romantic dreams come true. But she has one secret which she can never share.

Her true identity is Cupid, a descendant from Celestia sent here on a heavenly mission.

Only this time, our heroine has been tasked with her biggest challenge yet: handling the matchmaking, and thus the fates, of the infamous Parasite 5.

After a series of unimpressive interviews and workshops, they concoct the perfect plan. Parasite House, a shared home created for reality TV centered around the lives of the Parasite 5 and their romantic exploits.

Leading these hopeless men to marital bliss proves to be a Herculean task even for great Cupid herself! Can she live up to her name and keep her identity secret at the same time?! Find out in the most divinely unpredictable romantic comedy of the millennium! ♥

Arrive in New Sieg, a beautiful fictional town. Step into the shoes of Teuta – a strong, smart and gifted journalist, in this romantic adventure set in America. After witnessing the murder of crooked lawyer, Limbo, Teuta is destined to save him. With the ability to leap into the past for a very brief moment and take on the body of another – you must find clues, search for data, and help those around you. Thus, our journey begins. Travel to the past to warn Limbo of his fate and figure out how to save him!

Who Participated in the Poll & Overall Results!

So, to get these results I created a Google Form for participants to decide on their top 3 otome game localizations of 2021, with optional sections for folks to explain their picks for each choice. The form was open from December 15, 2021 to December 27, 2021 and a total of 318 people participated.

The list of games included in the following seventeen games (with options to write in games):

*Write in titles DEGRAMAN, Red Embrace: Hollywood, and Our Life Beginnings and Always received 1 vote each. However since this vote is restricted to localizations of Japanese otome games they will not be included in the overall results.

*Write in title Café Enchanté also received 1 vote, however the game was released in 2020 and will not be included in the overall results.

There was a pretty significant difference in votes between the top three games and the other titles released this year, though the Taisho x Alice series as a whole has been pretty well received by Western otome fans for it the comedic localization choices and fun (flawed) characters.

I picked Taisho x Alice Episode 3 because the localization balances out both the drama and the comedy of the games as a whole, but episode 3 deserves my top spot because the twist and associated foreshadowing was so cleverly executed and extremely well done in the English localization.

I was also pretty surprised to see that Moonchime’s localization of the indie Japanese otome, Suki Da (I Love You) came in at number six. This was a release that more or less flew under the radar when compared with some of the bigger releases of the year, but I loved it’s quirky characters and hilarious story and I really hope we get more indie Japanese otome localizations in the future! Steam Prison making it to in the top 10 isn’t a surprise, it was generally well received when it was released for PC and I’m definitely happy to see it getting a more comprehensive Switch release.

And to round things out, I figured I’d share my favorite otome game localizations of 2021! But, I’ll keep it brief since my choices are similar to the community picks.

My number 1 pick is definitely, Cupid Parasite, it’s a wild ride from start to finish and I absolutely loved it! The characters were fun, the color scheme is technicolor vomit, and the writing had me in tears!

Bustafellows comes in at number 2 (but just barely). I am a sucker for crime noir and mysteries and PQube really came out the gate strong with this release! A nice balance of fun and drama that kept me intrigued until the very end! (Also Scarecrow is bae!)

This was a hard choice, but my number 3 choice goes to Taisho x Alice Epilogue. It was a wild ride, but this definitely this wrapped up the story nicely (at least for me). Verde’s localization grew on me, but I can honestly say its what made this one of the most fun reads of the year.

2021 might as well be called the year of otome with the sheer number of new releases we got this year! I have been playing otome games for years now and this is the first time Western otome fans have had so much variety, from rom-coms to fantasy to action thrillers, we have our pick of the litter. On top of that more publishers are dipping their toes into the wonderful ikemen filled world of otome (which may create a bit of healthy competition~).

While the number of English language releases are still nowhere near the number of otome released in Japan, it does make me hopeful that there will be even more great releases on the horizon in the future. So I also asked folks to share some of the otome games they’d love to see localized in 2022~